This week I made overalls for Emil. 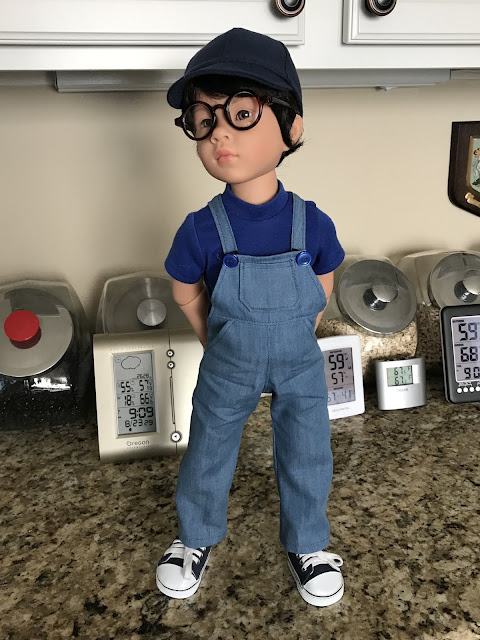 I used the Kidz 'n Cats version of the Oh My Gosh Overalls by QTPie Doll Clothing from Pixie Faire. You can see my alterations here. I got him out in the garden for some outdoor shots for the Ravelry Goetz Doll Lovers "Fun in the Garden" JAL (Join Along, which can include knitting, crochet, sewing or other fiber-related craft). 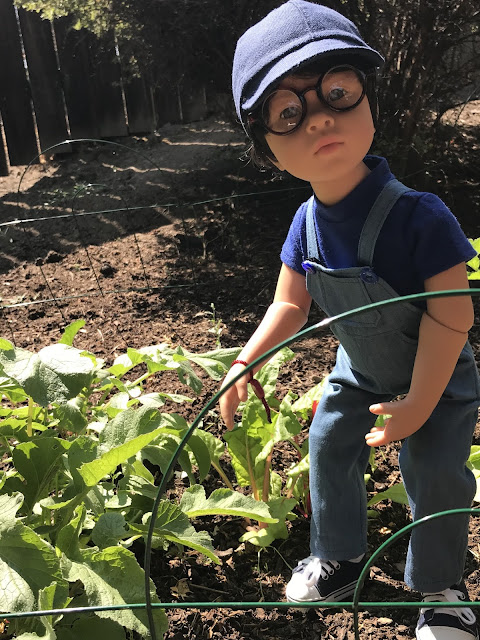 Here is a look at Emil's new wig. 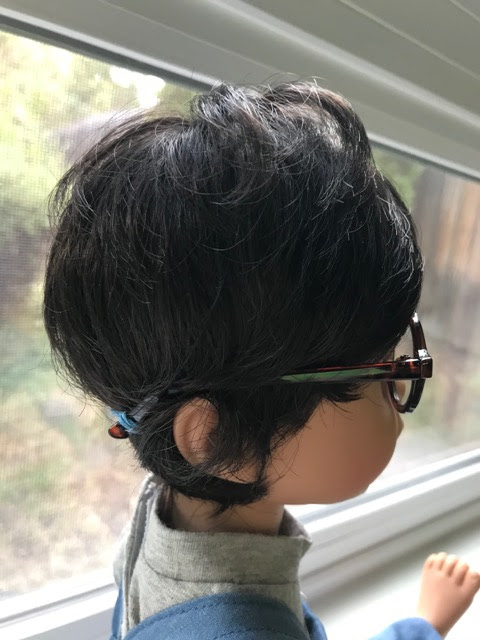 His new hair reminds me a lot of Zachary's hair, as you can see here, sitting at his new desk for learning at home until it's safe to go back to school in-person. 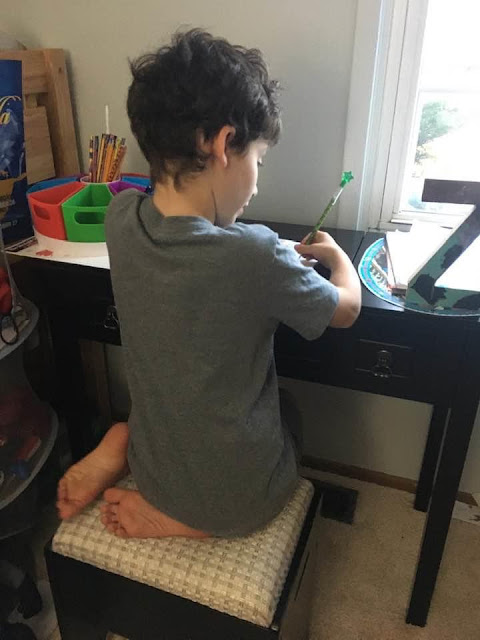 There has been some progress on the Whole Cloth Quilt. You might be able to tell from this photo. I'm working on the last corner that has much left of the part inside the border. I move my hoop around in concentric rectangles, from the center to the edges, so I'm not quilting any folds in on the back. There's a rosette in the lower-right-hand corner that shows where the border garland starts. I'm really looking forward to having this finished! 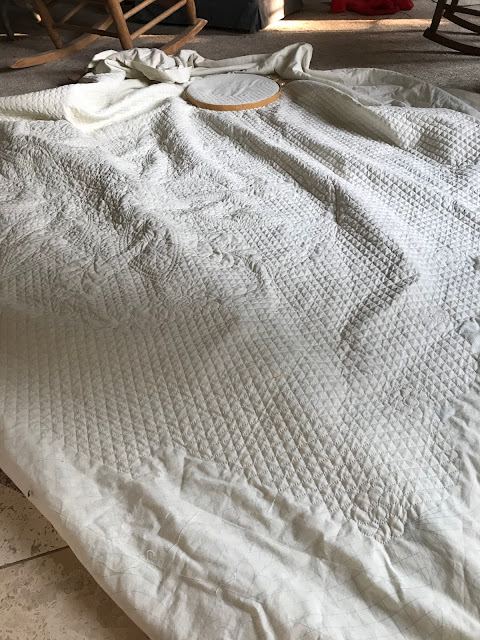 I took some time away from my "Which Came First Shawl" to start a dish mat for draining dishes. We put plates, bowls, cups, glasses and other dishes in the dishwasher, so most of what I have to wash is mixing bowls, pans and other things that don't fit into the dish rack so well. This will give me a good place to put the dishes after they are washed and rinsed. I used the "Grandmother's Favorite" dish cloth pattern, a free pattern on Ravelry. I made it as-written, except that I used bigger needles (10 1/2 or 6.5 mm), held the yarn double and knit until I had 78 sts on the needles (instead of 44) before decreasing. I should be done in a day or two. 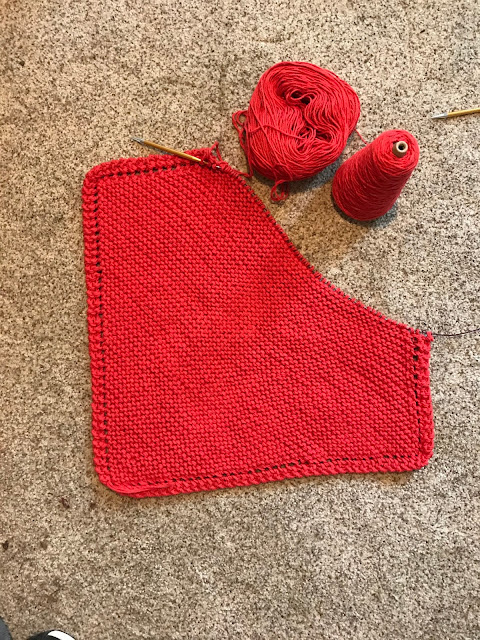 The yarn is Lily's Sugar 'n Cream, purchased at Joann's, which was another adventure. I bought several T-shirts (on sale), a couple of bandanas, a big cone of this yarn and some more bobbins for my Eversewn Sparrow 15 sewing machine (which I love almost as much as my Featherweight). I ordered online, and then I called from the parking lot. A store employee (masked) brought my order out, looked at my ID (without touching it) and put the bag in the back of my car. I wore my mask, too, so I felt fairly safe. Some people were going into the store, but they have a limit on how many can be in there, and I was happy to let someone else have my spot. Everyone I saw was wearing a mask, which is encouraging, because people have been slow to sign on to mask-wearing here because the cases of Covid-19 have been limited in this part of Oregon.

I'm making Kimchi again. I've found that regular cabbage works fine, you just have to chop it up more finely than the Savoy or Napa, which have thiner, looser leaves. 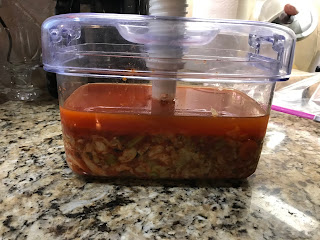 I made bread twice during the week, one loaf of sourdough rye for sandwiches and four little loaves to have with supper meals, regular mostly whole wheat, although I'm using 1/2 cup of the rye flour every time I make bread, because we have so much of it.

It was a busy week, with the Democratic National Convention going on. I signed up to participate in some of the activities during the daytime, including a women's meeting, where we got to see some celebrities, like Jamie Lee Curtis. I've never been to a national convention before, so I've never had the opportunity to participate. It was very educational. Having all the events online made it possible. We also had watch parties for the evening events, which was fun, communicating with people from all over the country. 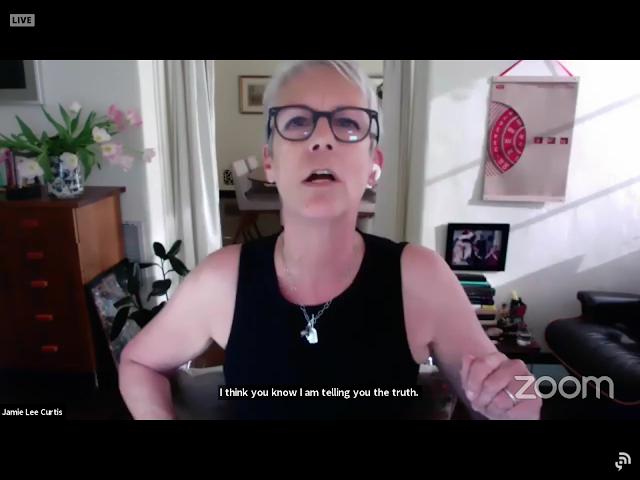 The Roll Call was like sort of a "Covidcation," where we got to travel (virtually) all over the United States and the U.S. territories. We got to visit places we wouldn't normally go, especially not during hurricane season. It was a lot of fun, more interesting than political conventions normally are. 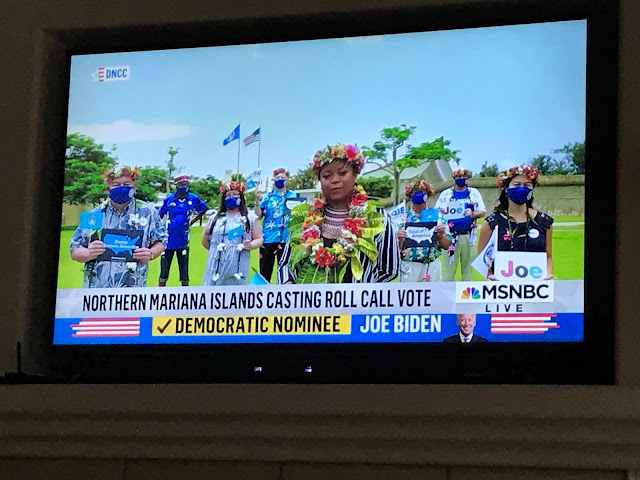 I'm continuing to write letters to voters I've never met encouraging them (in a nonpartisan way) to vote. I just write why I always vote. Once a week, on Saturday, we have a letter-writing party, so I set aside that time to write with other people in a Zoom meeting. I'm starting to feel like I know some of the regulars now. They are all so friendly.

I missed the text-banking on Tuesday because of the convention, but I plan to participate this week. For that, we are just calling people who are eligible to vote but haven't registered. We ask encourage them to register to vote.

What's on my needles: The big Dish Mat, about 75% done and the Which Came First Shawl (with few more rows done).

What's on my sewing machine: Finished overalls for Emil. I haven't decided what to make next.

What's in my hoop: Still the Whole Cloth Quilt. Again, a bit more progress this week.

What's in The Doll's Storybook: A Hair-raising Adventure. Billy doesn't think his hair makes him look like a real boy. 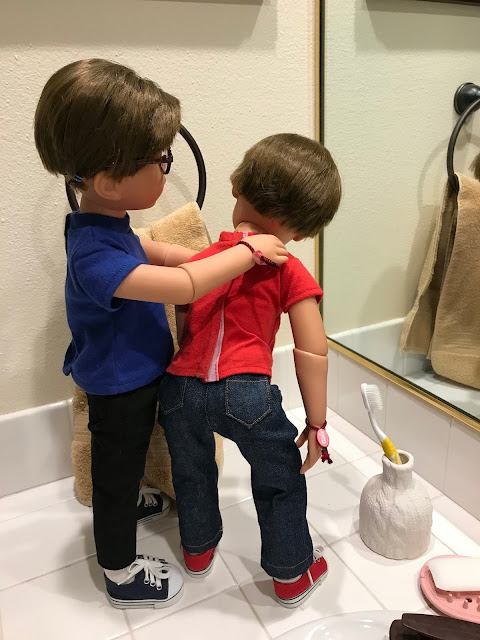 What's on my iPad/iPhone: Still Mrs. Tim of the Regiment. I've also been listening to music while writing letters.

What's in my wine glass: Primi Soli Trebbiano, an Italian white. The Trebbiano is the variety of grape, and it's very old. It goes well with just about anything. I usually prefer red wines, but this was a nice change.

What's my tip of the week: Making waffles? Sometimes I don't get the right amount batter for each set of waffles. I've discovered that the underside of the waffles usually look better, because the grooves get filled in, even if the top doesn't. I just flip them over after they are cooked, so the pretty side is up.

Yes, I hope they continue with it, too. It's so much more interesting.

I think it's interesting that Jill Biden and Kamala Harris both stepped in to look after step kids. They probably have a lot to talk about when they are together.

Enjoyable blog as usual.  My husband & I really enjoyed the DNC convention last week.  We hope that continue that same format long after this Covid stuff is over.  I really enjoyed seeing places pertaining to the states & territories when the delegates announced their ballot tallies.  It was so much more personal this way.  Jill Biden's speech made me cry when she talked about becoming a mom to Joe Biden's boys.