I'm leading off with Vintage Stitchers this week... 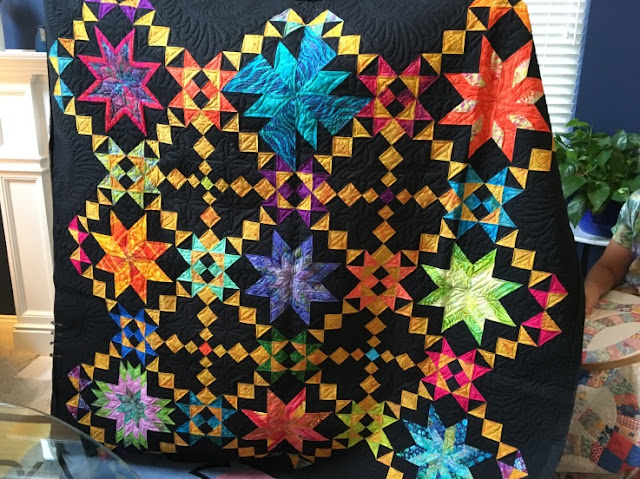 ...to please the long-suffering quilters who read my blog. We met at Marilyn's on Thursday. Marilyn's middle name is "Bright," and this is her quilt.

Julie was working on hand-quilting a fund-raising quilt. The top was donated. 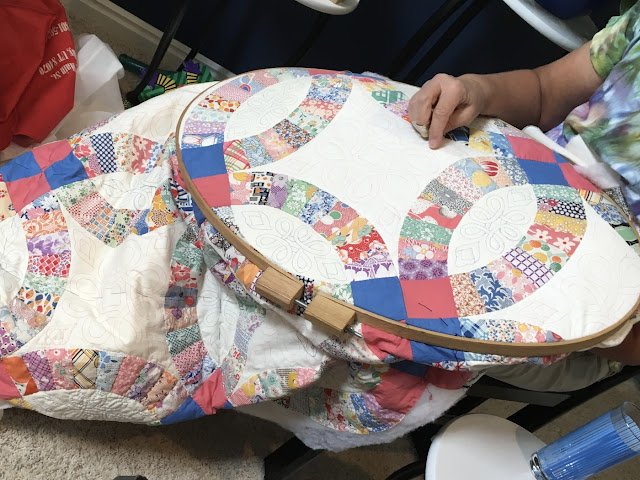 She's the go-to person when we want something quilted.

Rebecca is working on another crayon piece. 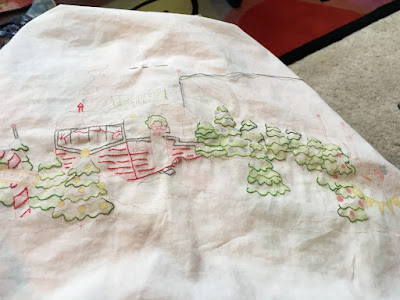 This is the pattern. 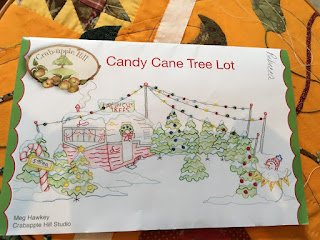 I was working on my "Sistine Chapel." On the third and last panel and outer border. 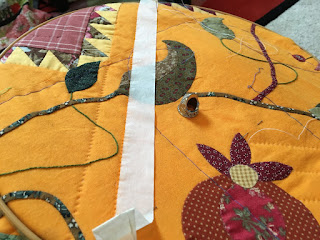 I'm using the masking tape to mark where I want to quilt.

Shirley, my contact person with Habitat for Humanity for the silent auction, loaned me the 2015 quilt (which she won/purchased) to show Vintage Stitchers this week and Park City Quilters next week, because members made the blocks for it, as well as the 2017 quilt. 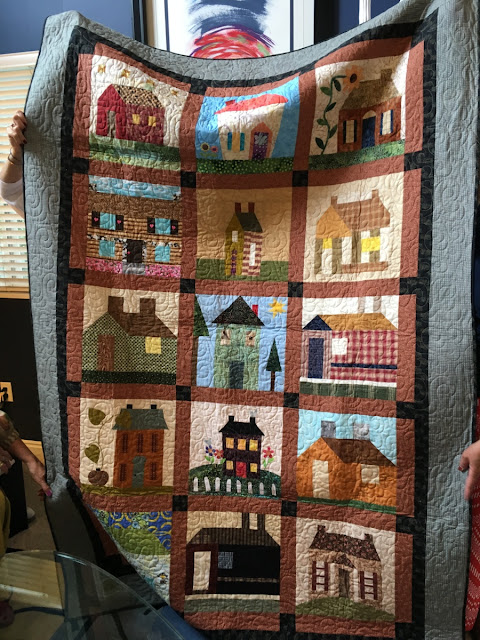 Speaking of the 2017 quilt, here it is. All quilted, binding and label sewn on. 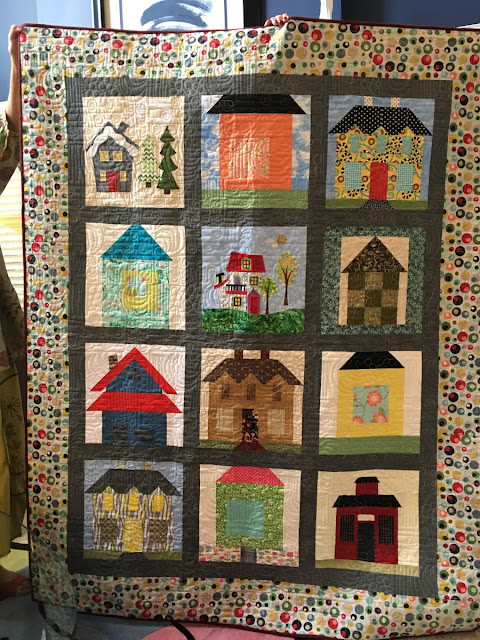 (Well, the label is on the back, that that would take another photo.) Julie brought it to me all quilted on Tuesday.

During the week we had a number of repairs done to our house. I had to take the pups out into the backyard when the chimney sweep/repair man was fixing our chimney. He had to get up into the attic, where there is a lot of loose fiberglass. We didn't want the pups walking about in the fiberglass that wafted down into our living area, so I ended up spending a lot of time in the back. I took the quilt to work on, sewing the binding down. I finished before the chimney repair was done.

We also had our damaged solar panels replaced this week. I think they have figured out how to mount them so that the snow won't damage them next time we have a winter like our last one. With luck, we'll be living somewhere else then...a place with a little less snow.

The plumber was also here, the same one who replaced our water heater. This time he was here to make a number of small repairs to the plumbing, but also to install our new dishwasher and to install the faucet array (replaced for us by Pfister) and the new RO faucet, all of which had been leaking. 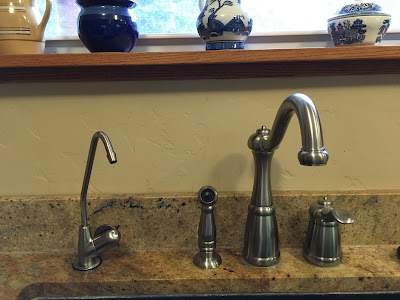 It's the same faucet model we had before, but new. I think it's pretty. We also got a new garbage disposal installed. 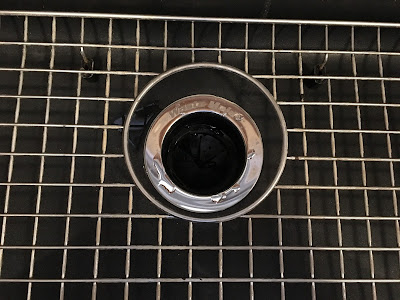 Like the new garage-door opener and the new dishwasher, it's very quiet. (Just don't stick your hand down inside.)

I'm still working on outfits for Zoey, the Therapy Animals of Utah Doll. I gave her the Cyan Gracie Cardigan, because it matched her shoes. 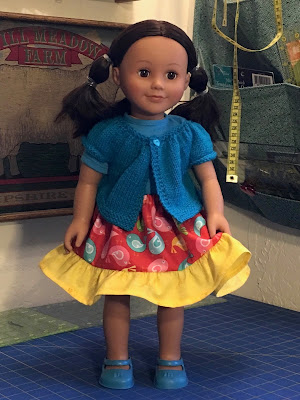 Then I finished the jacket for her and tried it on her before it got cold, while she was still in her skirt. (If she looks startled, it's because the flash went off.) 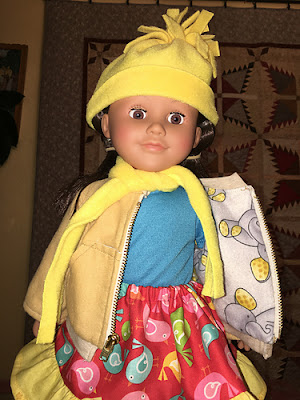 The jacket really went better with her new jeans, though, especially with the yellow boots. 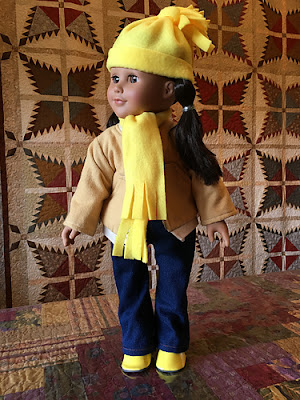 Here's a better look at the jeans. The pattern is the "Boot Cut Jeans" from Liberty Jane. it's a good pattern. I've made is several times. the jeans look good with her new pink sneakers. 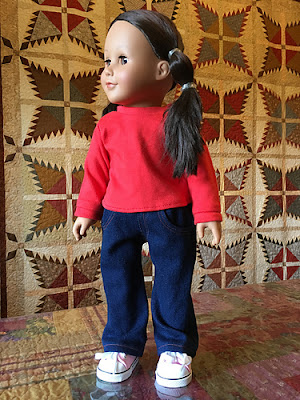 I also made a bathrobe to go with the cute paw-print PJs. It sort of has the Obi-Wan look. 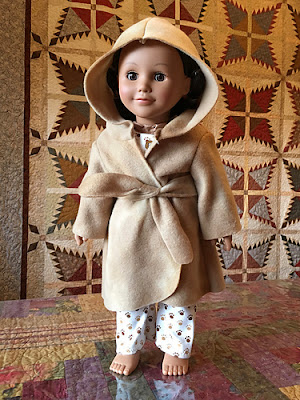 I decided to give Zoey the green French Back-to-school Cardigan, because it goes so well with her tunic, and it makes me cold to look at her with bare arms. Her black patent-leather pumps came in the package with the sneakers and her special hairbrush. (You have to use a brush with metal bristles on dolls with rooted hair. A wig brush or a dog brush of the same type will work, or you can buy a doll brush...usually cheaper.) 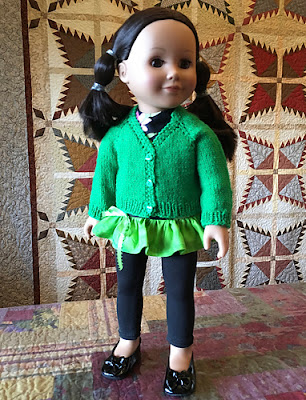 I have another couple of things planned, but they will remain a secret for now.

More unneeded things were found in my fiber studio and were included in my drop-off at Savers in Salt Lake City on Thursday, after Vintage Stitchers at Marilyn's.

Friday was our 52nd anniversary. This was a quiet one. We were both busy, so we didn't go out. Sometimes staying in is nice. 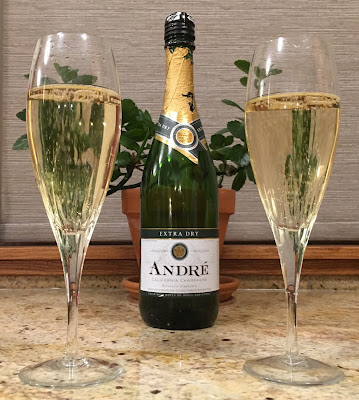 You can tell we broke the budget for the champagne! (LOL!)

What's on my needles: Still Kitty Cat : 1 Cardigan with Knit Picks Palette in “Lipstick” for Vroni, to go with the sun dress. She’s wearing her Fair Isle Cardigan right now because I felt cold looking at her.

What's on my Featherweight: Still clothes for the Therapy Animals of Utah doll, just finishing up.

What's on my iPad/iPhone: Finished Emma by Alexander McCall Smith and now listening to A Royal Pain by Rhys Bowen, the second of her novels for me. I’ll probably end up listening to all of them.. A couple of chapters into Amy Corwin’s novel All She Loves on the Kindle app.

What's in my wine glass: Charles Shaw (aka “Two-buck Chuck) Merlot. (I need to pace myself; who knows when we can replenish this supply.)

What's my tip of the week: Keep an empty box close at hand wherever you sew/knit/spin/weave. Whenever you come across something where you wonder why you still have it, toss it into the box.

Barbara, I'm looking forward to the finished "masterpiece," too. At least doll clothes are quick.

Yes, as always, so many beautiful quilts and doll ensembles. I need to get my act together. (okay, that made me laugh too) The peeks at your Sistine Chapel are beautiful. I can't wait until you show the completed masterpiece.