High Fiber—Waiting for the Final Shipment

Well, the loom didn't get put together. This week got away from me, and the light in there isn't too good yet, so from late afternoon on, it's hard to work in the alcove where the loom is.

However, Billy's hat to go with his cardigan is done. 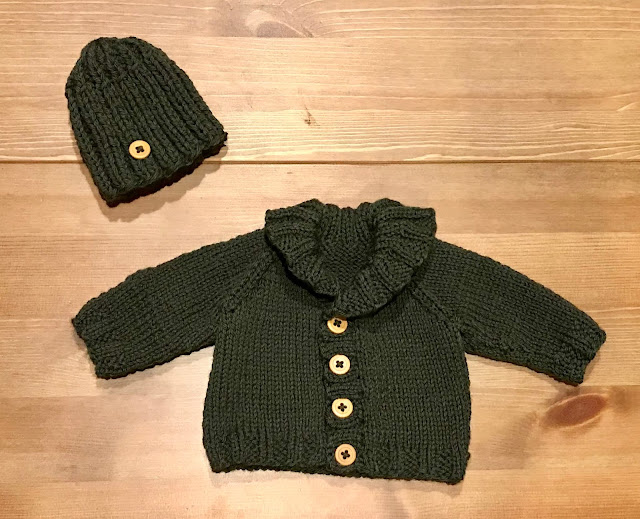 I CO the Cur-Pic-u-lum pullover by Deb Denair. You make the sleeves first and then join with the body when the body is done to the arm scyes. One sleeve finished and one partway done. 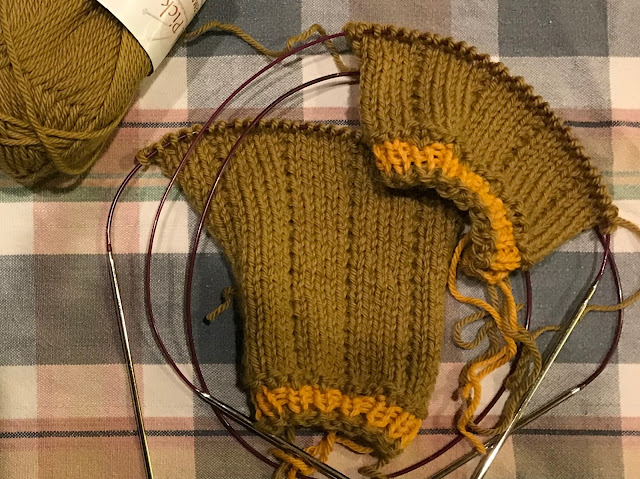 I managed to get next week's story done. This week's is up at thedollsstorybook.blogspot.com. It's called "Charlotte's Birthday." Here's a taste: 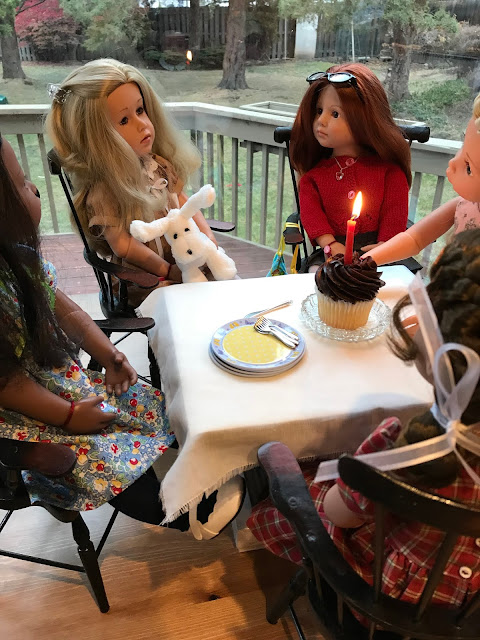 So what did I do all week instead of putting the loom together? I've been having trouble with my foot. We didn't have a doctor here yet, and I went to urgent care for extreme itching/stinging/burning of my right foot, which made it impossible to sleep well. It seemed they were just throwing things at it to see what would work. Eventually I had blisters on the bottom of the foot, possibly from the topical ointment prescribed or a further symptom of the condition. Possible diagnoses ranged from fungus to neuropathy. We finally were able to obtain a GP/internist who brought in a black light to shine on it. His tentative diagnosis was a possible bacterial infection, but he's doing a culture. In the meantime, I'm treating it with antibiotic ointment. While we were in his office, he noticed that I needed the second Shingrix shot, which he had on hand. (The local pharmacies are all out until January.) Just like the first shot, this one made me sick, but this time just for 24 hours. That killed the next day (Tuesday), though. I had a fever, aches and was exhausted. The foot seemed better, though.

Tuesday also was the election. DH stayed up all night to watch the returns, but I went to bed about 10:30. (I'm still catching up on lost sleep from the foot problem.) I woke up Wednesday morning feeling almost back to normal, but still very tired.

The pups hadn't been to the park for some time, so we walked over there on Friday. We have access to the Larkspur Trail just across the street and a few houses up from our place, so we went on the trail. When we left the trail, it was only a couple of blocks on regular streets.

One lady was dog sitting several other small poodles, plus she had her own dogs, one of them a Yorkie, I think. There were five all together. It was sunny, and we were warm enough with only light jackets. 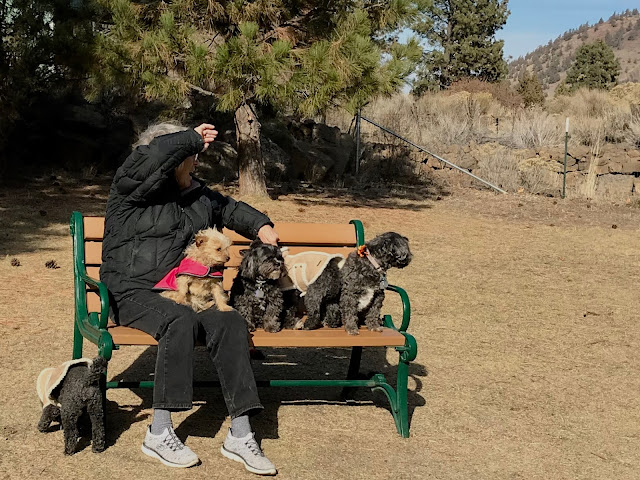 Sunday morning, Rocky woke up not feeling well. He seemed uncomfortable getting off the bed, wanted the door opened for him instead of using the pet door, and then seemed to have difficulty keeping his leg in the air. He started shivering after he came in. He seemed uncomfortable for a while throughout the morning. We called our new vet, whom we had not yet met, and was able to get an appointment for 3:30 PM. By the time for our appointment, he seemed much better. On examination, the vet's guess was a mild back injury, not uncommon among older dogs. We left with some anti-inflammatory medication and a mild pain medication. We go back on the 20th for a recheck and for his twice-yearly blood pressure and thyroid check. The three of us are growing old together. Dusty, on the other hand, is taking his time about growing up. 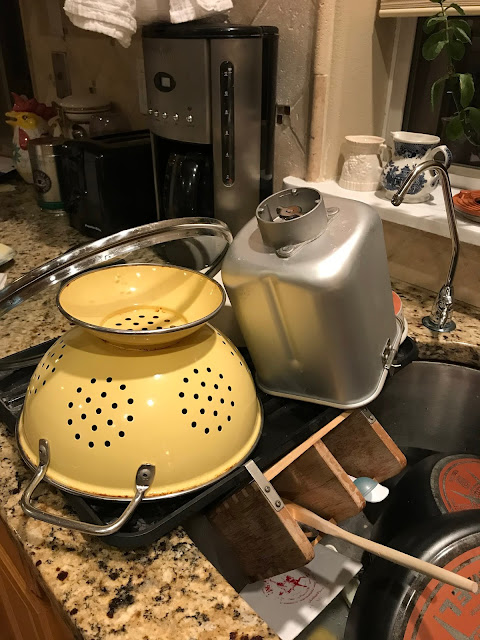 It's a good thing I have the tray that goes with it. I will also be happy to see the container for my blender. The blender isn't much good without it.

We're continuing to fix things in the house. One item is the refrigerator. The shelf under the ice maker was installed wrong, but that was an easy fix. One shelf in the freezer was missing. We ordered one, but they sent the wrong one. 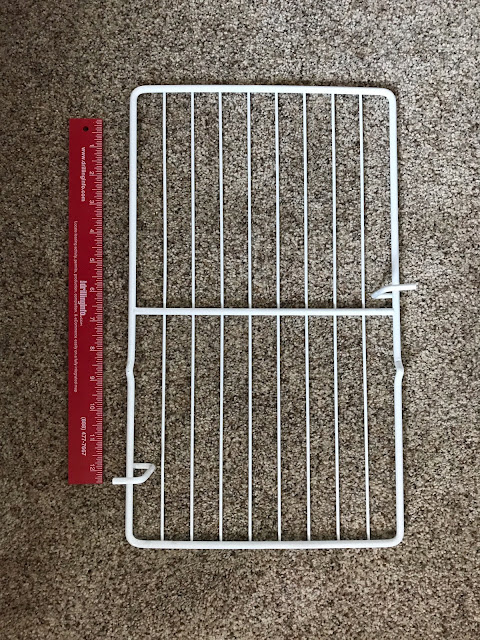 Strangely enough, it had the right part number on it, but the photo didn't match what was inside. They're trying to make us pay for shipping on the return.

One good new purchase (one we're keeping) was this bench, with storage for shoes. We have it right by the front door, so we can sit to change our shoes. (We have boxes of packing materials--bubble wrap, peanuts, foam envelopes for dishes--to give away, sorted and lined up along the wall in the hallway.) 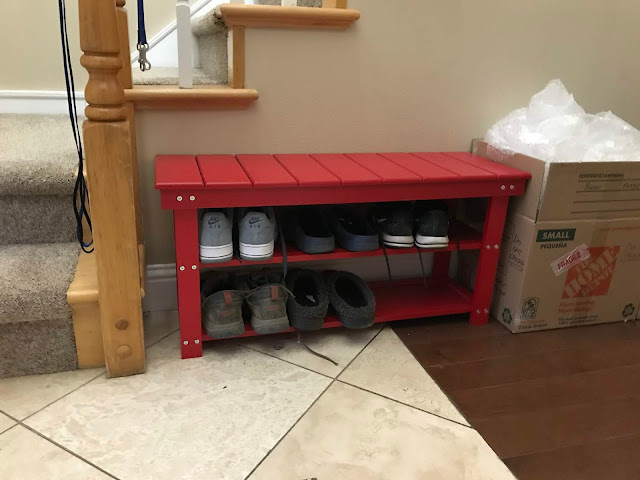 Billy landed in San Francisco on Saturday. I'm hoping they don't keep him in Customs and Immigration too long. Maybe he'll arrive this week.

What's on my needles: A new pullover for Billy, the other things still untouched.

What's on my Sparrow 15: Still sitting in my future fiber studio.

What's on my iPad/iPhone: The Ladies of Ivy Cottage by Julie Klassen. No listening this week.

What's in my wine glass: The most delightful Apothic Red. "California--Intense fruit aromas and flavors of rhubarb and black cherry that are complemented by hints of mocha and vanilla. The plush, velvety mouthfeel and smooth finish round out this intriguing, full-bodied red blend." No lie.

What's my tip of the week: We have several places where we buy groceries. There are certain things we like to buy at each place. We have made up a document with those items listed after the name of each store. We print it off, stick it on the fridge with a magnet, and when I discover something we need to replace, all I have to do is circle it. When one of us goes to the store, we grab the list. If there are items we didn't get because we didn't go to that store, we bring the list back, with the purchased items crossed off.

Well, in fairness to the movers, we didn’t have an exact destination when we left. Everything went into storage, before we pulled out in our covered wagon.

Peggy, by now I hope your last load has arrived.  Gosh, I'll bet you are starting to feel like you will never get moved & settled.  I have only used a moving company twice, but never had it take this long to get my stuff.  I would be pulling my hair out by now!

Thanks, Irene. Rocky and I are almost back to normal. The gas is in for the laundry, but DH still needs to hook up the water and put the vent hose on the dryer. I was able to get the heddles on two of the shafts on my loom. Two more to go, and the rest should go fast. The last load of household goods should come tomorrow.

Peggy I'm sorry to hear about your foot problem and your dog being sick. It will be nice when you get the rest of your belongings and finally get settled. I love the bench with the shoe racks.

Thanks, Janet. Tests for neuropathy today ruled that out, but the foot is much better. I'm really looking forward to having my washer and dryer hooked up (tomorrow) and the arrival of the rest of our stuff Wednesday, hopefully with nothing missing or broken.

I hope your foot heals soon.  Hopefully the rest of your stuff will show up this week & you can finish getting settled.