High Fiber—Waiting for the Movers.... 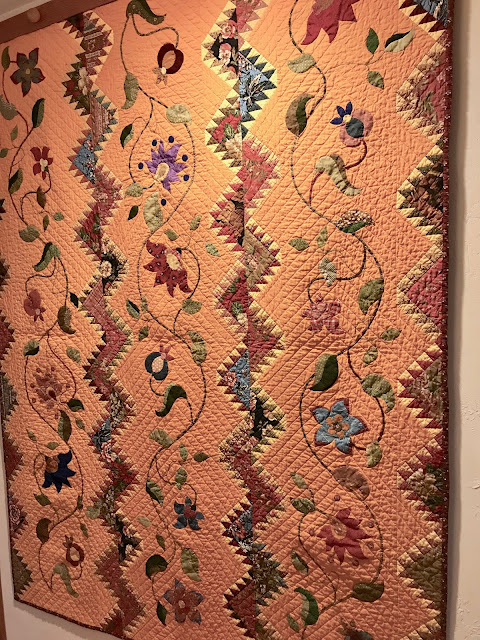 I know you've seen this, but I thought I would put together a summary of how it went together, as I've been pretty much a drudge all week in preparation for the move with nothing much to show, other than another little story. But I digress....

It all began when I went to the Utah Quilt Guild's annual Quilt Fest, which took place in Ogden in 2004. Mary Sorensen was teaching a class in needleturn appliqué, and I signed up for it. She had some patterns available, and one of them was her Delectable Pathways. I bought the pattern and started looking for fabric for it. Here's the photo of the pattern, stolen with attribution from her website: 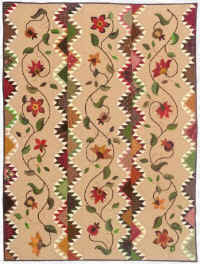 My friend Julie was closing down her quilt shop at the time, and she was having a big sale. I bought yards of cheddar in three shades for the background. Then I started collecting fabrics in colors I like and that would show enough contrast. I also had plans at the time to make the Pine Burr Made Modern quilt from McCall's Quilting, but that really called for paper piecing, a technique I found intimidating (but no longer). The Delectable Pathways pattern had paper piecing as an option, with very good directions, so I picked that method to piece the Delectable Mountain blocks. It was good practice, and I later finished the Pine Burr quilt long before I finished the appliqué for my Delectable Pathways quilt, leaving the Delectable Mountain blocks in stacks as I worked on the appliqué. 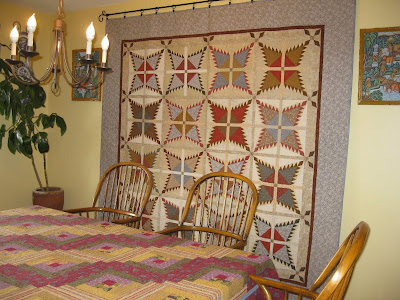 The appliqué was fun, but it did take some time. I stay-stitched the strips of background fabric, traced the pattern using a chalk pencil and started with the stems, layering the pieces as I was taught in Mary's class. 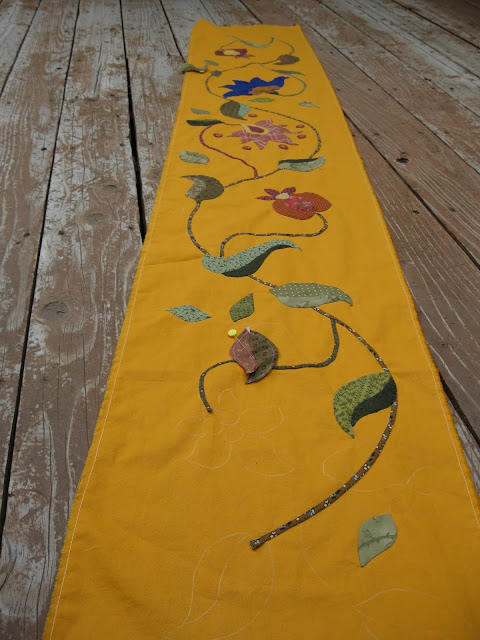 I had a lot of fun choosing the fabrics and working on the appliqué. 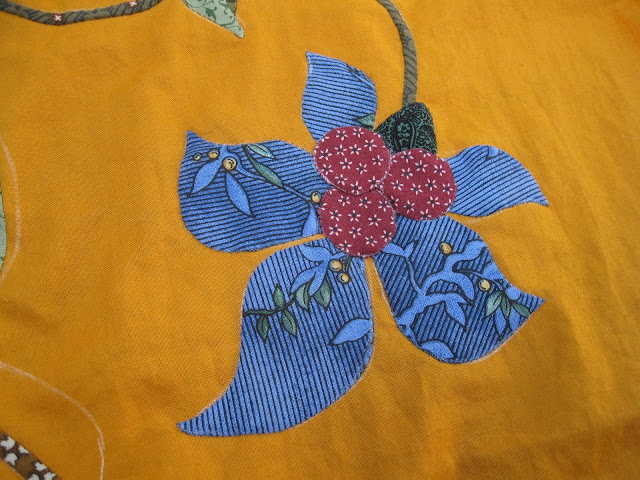 It did take time, and I continually moved on to other projects, coming back to this one when I felt like it. 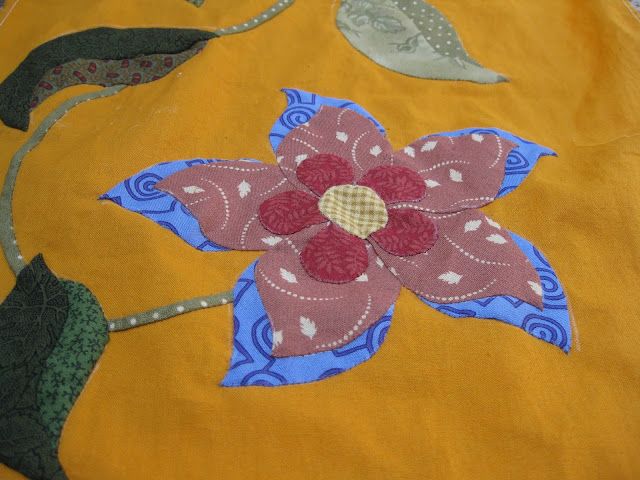 Eventually I had the appliqué done on two of the background strips, with only one to go. 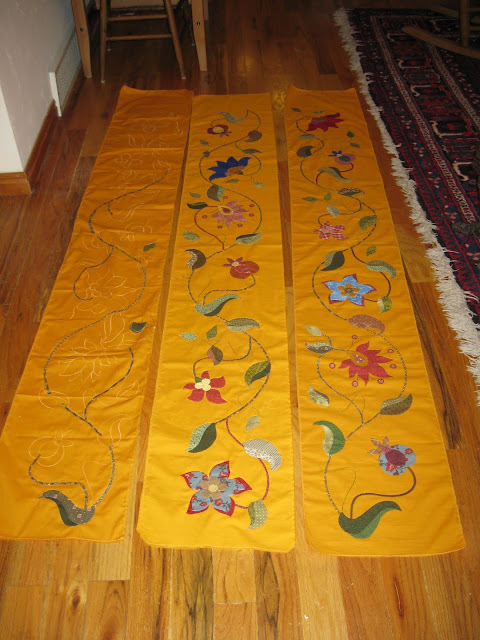 It seemed to go faster when I could see how little there was left to do. I remember the day I put the appliqué strips up on my design wall with the Delectable Mountain blocks. 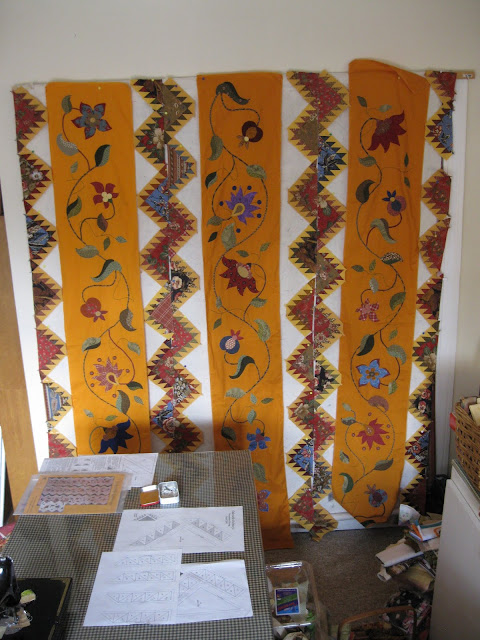 I still had to sew the triangles of background fabric to the blocks, but that went pretty fast. 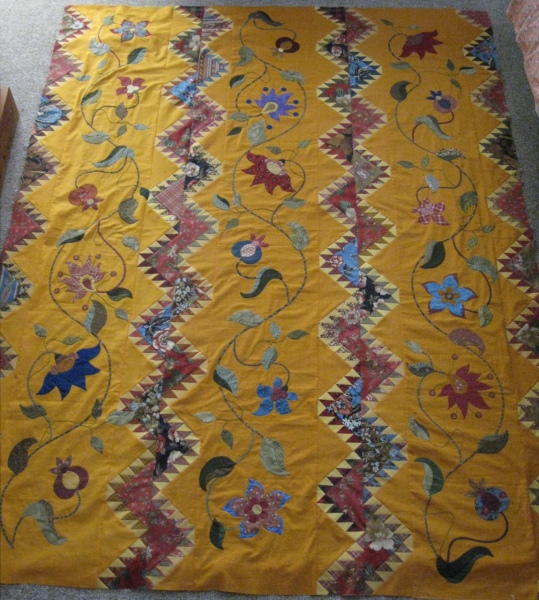 Then there was the hand-quilting to do. My friend Julie basted the layers together using her long-arm. I'm sure she enjoyed seeing her cheddar fabric again.

I made use of my trusty hemostat to stitch in the ditch around the half-square triangles. (The trick is to pull straight out, not in an arc, which you can get away with if you're pulling the needle out by hand. I broke several needles before I learned, but it's a great tool if you have loaded too many stitches on the needle.) 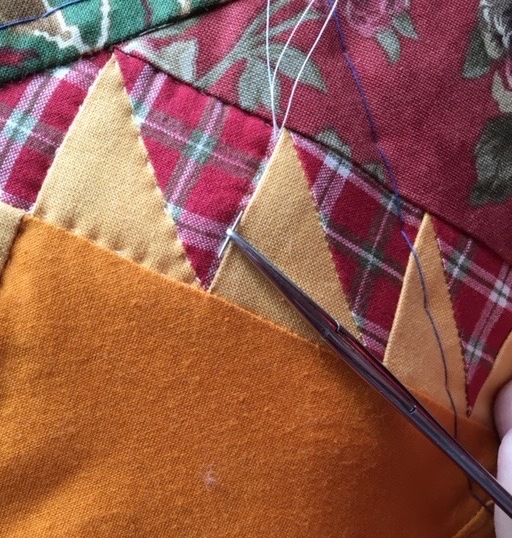 Then I used masking tape to keep straight lines  across the background, skipping the appliqué pieces. I used a technique called "traveling" to move through the batting to the next place to start stitching. 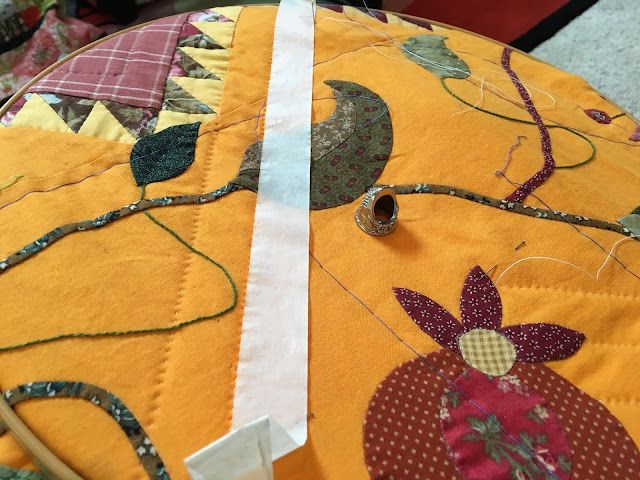 When I wanted to finish a row of stitching, I made a knot on top of the fabric and then pulled it through, if it was convenient. (The quilting thread is white. It looks pale blue in the photos.) 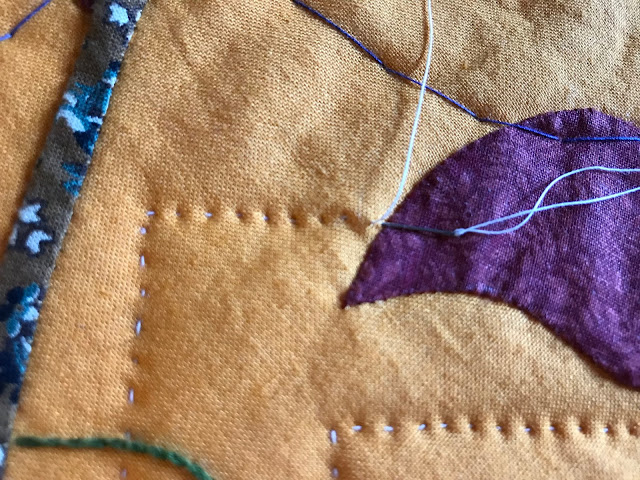 As an alternative, I would run the needle through the layers to one side and then the other of adjacent stitches. 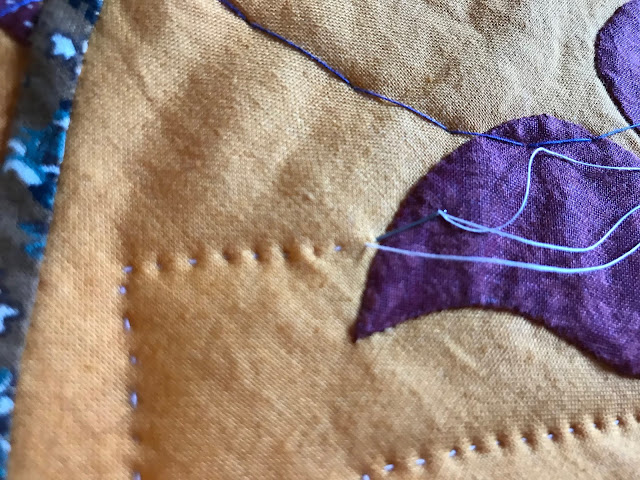 If I needed to, I would back the eye of the needle a little bit out through the quilt top to get the angle I needed, then continued threading through the stitches. The result is a finish that will be flexible but won't come out ever, as knots can. 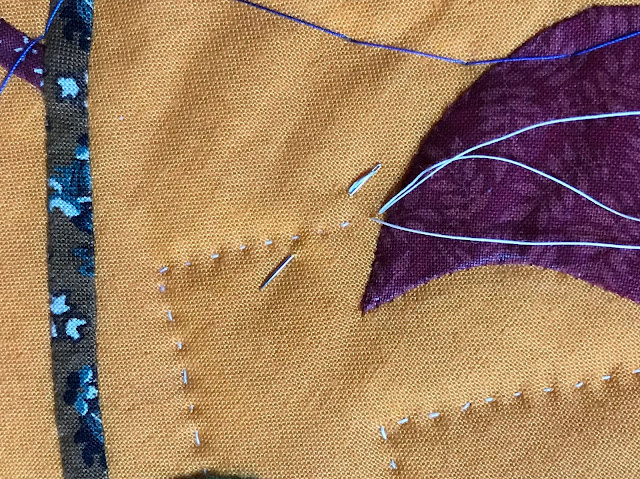 I sort of worked out the pattern as I went along. 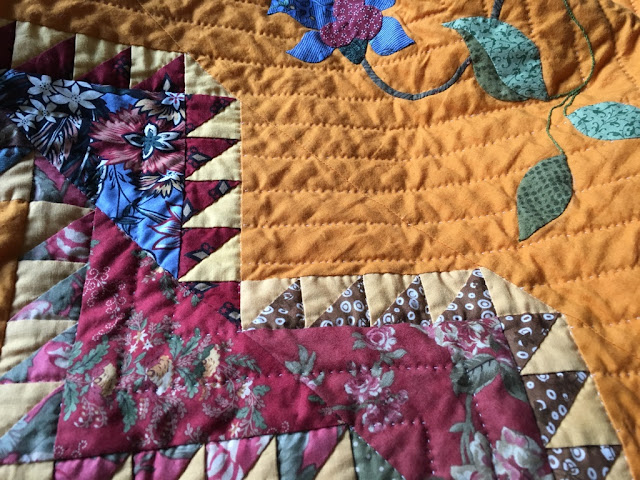 Finally it was ready for the binding. It wouldn't fit on my table, so you just see two panels. 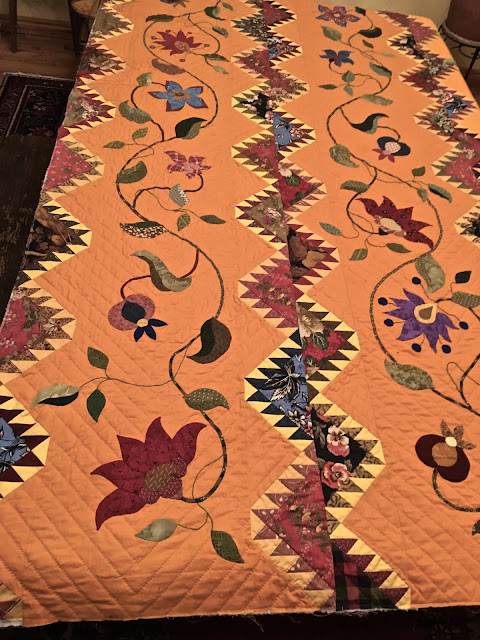 Then ta-da! (Thanks to DH for holding it up when I was done. That's his thinning hairline showing up just above the top of the quilt.) 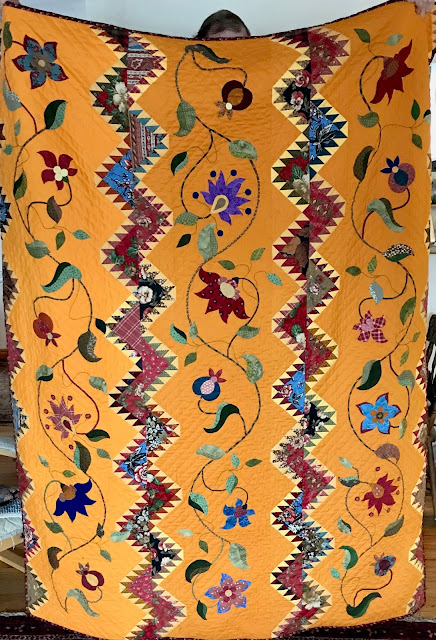 It went up on the wall in the hall, not the wall I had planned for it, as DH would have needed the extension ladder, and we knew by then that we would be selling the house soon. It was nice and cozy in the hallway, though, and we know will have to find a nice place for it in the new house when we have one. 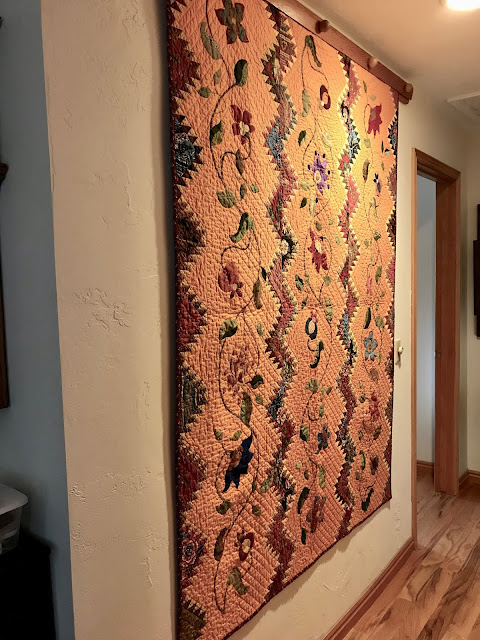 Here's a list of what I got done this week instead of having fun (although some of it was fun):

Got the car serviced, finishing about three rows of my shawl while I was waiting.

Found some houses I would love to look at when we get to Bend, if they are still available.

Learned the alto parts for four pieces to sing Sunday. (Then I sang them mostly correctly. I should point out that I'm a soprano, which meant some additional challenges.)

Took the dogs to Run-A-Muk.

Packed my Sparrow 15 sewing machine and my spinning wheel.

Finished another story for The Doll's Storybook. Here's the one that came out on Friday.

Took another load of things to Saver's in Salt Lake City.

Sold some tires and tools online for DH.

Did some cooking and laundry.

What's on my needles: Still the Kisu Cardigan for Jolena, and still at the BO for the neck. Also the Coastal Skies shawl for me, which I worked on a bit more this week.

What's on my Sparrow 15: Packed away for the move. Never got to the overcast foot. However, I'm looking at sewing tables that will suit after we get moved.

What's in my hoop: Still the Spring Flowers quilt, nothing done this week.

What's on my wheel: Stanzi is packed away for the move.

What's on my iPad/iPhone: The Innkeeper of Ivy Hill by Julie Klassen. Just finished the first chapter. 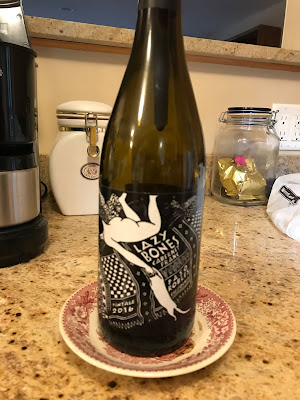 After the week I've had, I am totally into this wine. 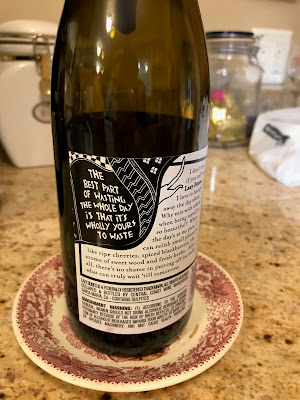 What's my tip of the week: Whatever your plans are, always have a Plan B. (I learned that and many other things from Manuel, our choir director.)

I'll make a note of those, thanks! The first 10 years we lived here the closest places to buy yarn and fabric besides Walmart was down in Salt Lake City, a sometimes dangerous trip in winter. Now we have a yarn shop and a quilt shop, and the quilt shop carries sewing supplies not strictly for quilting. The Walmart turned into a Supercenter, putting in a grocery store we didn't need and reducing their sewing/crafting department to almost nothing. We now have a Michael's, too, but I don't care for most of their yarn, and they don't have any fabric.

I know of two more quilt shops a few miles north in Redmond and one in Prineville, which are both close to Bend.  If you go a little further south on Hwy. 97, there is also a quilt shop in La Pine (Homestead Quilts & Gallery), which also has yarn.  You will be virtually surrounded!  Lucky you!

I know that there are at least three quilt shops in Bend, and then The Stitchin' Post in Sisters. I only know of two yarn shops in Bend, but The Stitchin' Post also sells yarn. Bend has an emergency veterinary clinic open 24-hrs Friday - Monday, and then 5:00 PM - 8:00 AM the other days, so they cover the times most vets are closed. Here, we have to go to Salt Lake City for an emergency 24-hr pet hospital. It's about 40 minutes away. Our emergencies always happen on weekends, evenings or holidays. Our dogs are family members. When we had a cat, she was, too.

Yes, Peggy, Bend, OR is an all-purpose community, and it has grown quite a bit since my downhill/cross-country skiing days on Mammoth Mountain.  I have visited several quilt shops there and I'm glad to hear that there are plenty of pet support businesses too.  DS lives in Seward, AK, and recently had to spend all night in Anchorage (hours away) in an emergency vet clinic when his cat was seriously sick!  Blue (the cat) recovered, but he sure wishes there were services closer to him!

I need a sewing room and a place for the loom, so two rooms for my hobbies or one big room, like a bonus room or something. We need RV storage on-site and a dog door or a place for one. Bend has lots of dog parks, vets, groomers and pet supply stores. There's always a place for these girls to act out their little stories.

This new house in Bend better have an awesome sewing/fiber arts room to accommodate all your interests and a photogenic area for staging the dolls!  -- Not to mention a dog park nearby for the pups.  (I know there is some fantastic scenery there.)

Buying a house is so much easier than selling one! Enjoy the process! Beautiful quilt as always!!!!

Sounds great all around, Janet!

Peggy, I hope you are able to find a house you will love with a minimum of hassle.  Maybe you can get settled before the holidays, which will be here before we know it!  Mary S is very talented & I'm thinking of taking her class through IQuilt.com.