High Fiber—Warm Fuzzies While Doing for Others

Buddy's sweater vest is done, and Dude's is on the needles. 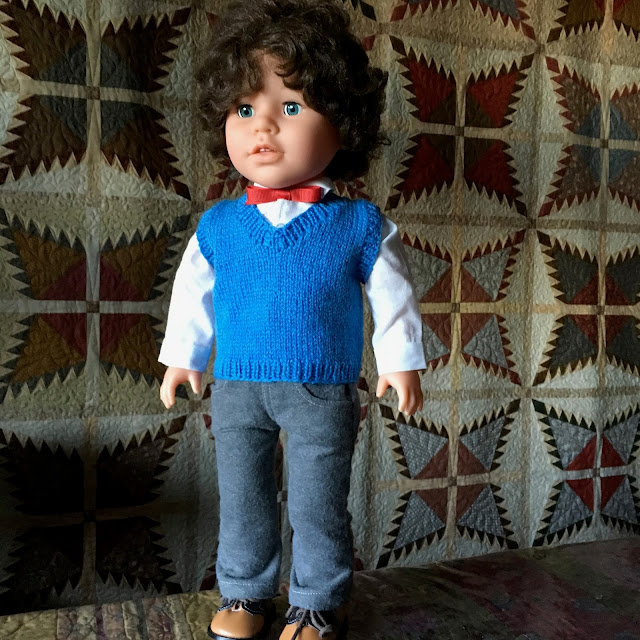 I adapted a doll sweater pattern I like, the same one I used for Hannah's Fair Isle Cardigan. You can find information on the pattern and how I adapted it on the project page for Buddy's sweater vest.

Both sets of dress pants and shirts are finished, and the boys got to show them off in a "skit" they put together for cancer-awareness month (not just for breast cancer, but others as well). We took part in a knit-along on Ravelry in the Götz Doll Lover's forum on Ravelry called "Think Pink 2016," where we had to post something specific each day, always in pink or with pink on it somewhere.

Dolly produced and directed a scene where Dude and Hannah played the parents of a child who needed surgery for cancer. (I chose Wilms' tumor, because the treatment involves surgery, and it occurs in children.) Buddy played the child's pediatrician, and Gabi was the surgeon. It gave me a chance to try on the doctor's coat, stethoscope and scrubs I bought for Daphne Jr. for Christmas. The medical outfits came from Home Sew. Hannah's purse also came from there and made an appearance in an earlier post in the knit-along. All the shoes in the photo came from The Doll Clothes Store. 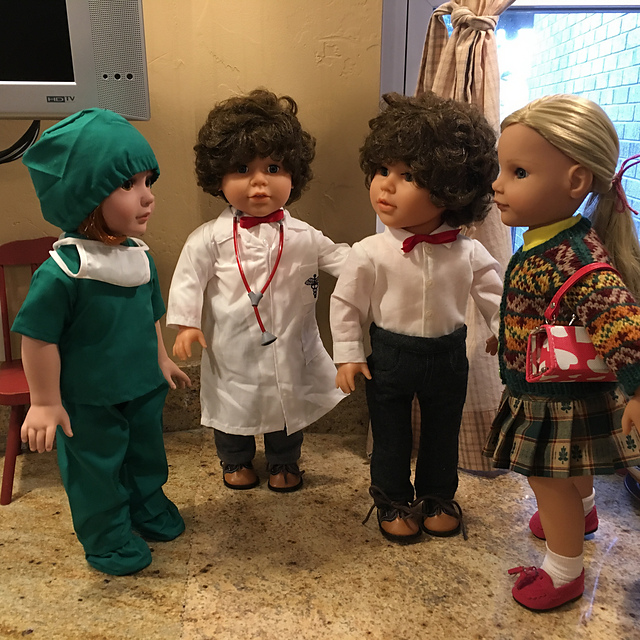 Some participants decided to work entirely from stash and donate what they would have spent to cancer research. I decided to do that, too, since I have so much stash. The boys' pants were made using the Boot Cut Jeans pattern from Pixie Faire. The shirts are based on the "Cowgirl Shirt" from Best Doll Clothes Book. I just left off the yoke overlays on the front and back. The bow ties are improvised from red ribbon and fasten in the back with a tiny piece of Velcro.

In the Frog Prince group on Ravelry, we decided that it looked like a scene from General Hospital, and Buddy and Dude were identical twins separated at birth who somehow both ended up in the same hospital, both concerned about the same child.

This was the week of the "Overall Ball" for our local Habitat for Humanity. We had our photos taken holding some tiny tools (I have a spanner, DH has a hammer), and the photo was superimposed on a photo of some Park City houses in the old part of town. 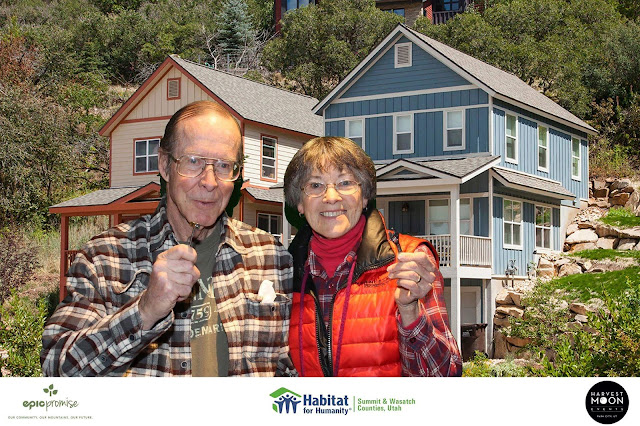 Of course, the main reason we were there was to help promote the silent auction of Lauren and Zoey, who joined in because we ended up with so many clothes. Here's how Lauren looked displayed with the suitcase and clothes. I had a slideshow of photos of the clothes that were included playing on my iPad set up on an easel next to the display. 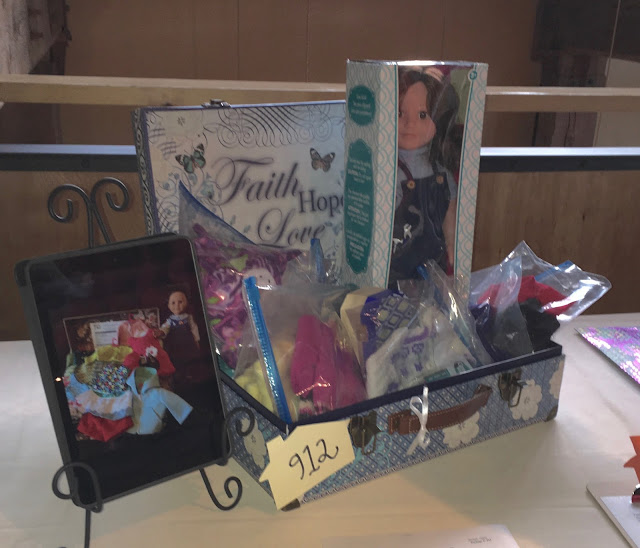 Zoey had just as many clothes as Lauren. A couple of Ravelry friends sent me extra outfits, which helped up the price. 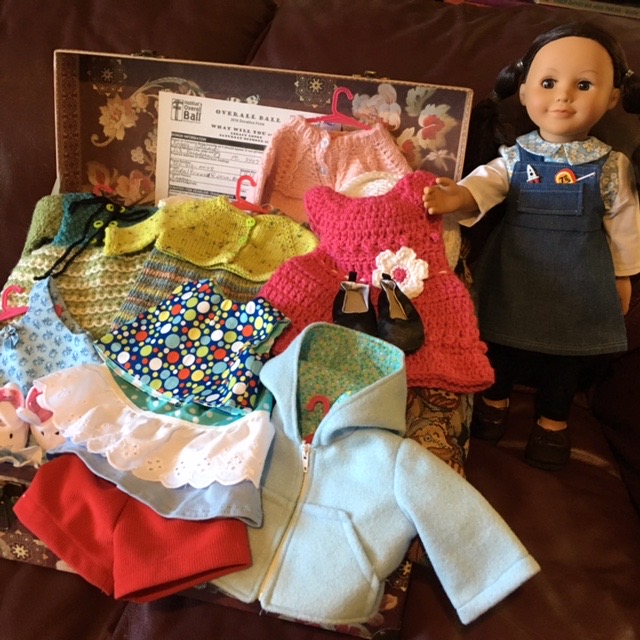 Together they brought in about $350 for Habitat for Humanity. The dolls, suitcases and shoes were donated as well as the handmade clothes, so all the money goes to Habitat. 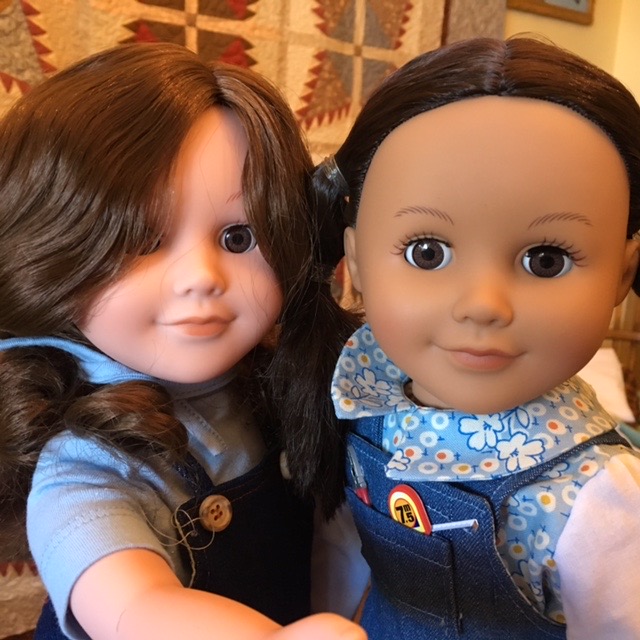 Lauren took a selfie with Zoey when they said goodbye at my house before the party. We're thinking about doing this again next year, but with one of the dolls being a boy. (Lauren and Zoey are Creatology dolls from Michael's)

This week also brought our absentee ballots. Our county decided to go to all mail-in ballots this year. We always get a mail-in ballot, but usually have the option of going to the polls to exchange it for a regular ballot. We consider voting an obligation, so we never miss it. 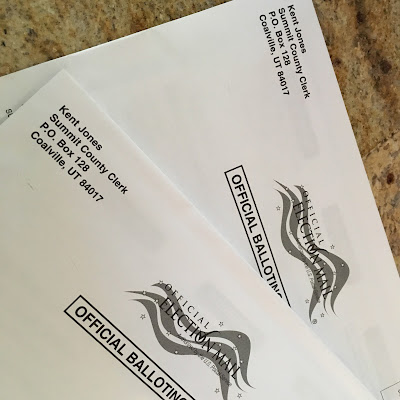 Our canine warm fuzzies are back to normal, unsupervised play and long walks. Dusty is completely recovered from his "reconstructive surgery" (not performed by Gabi) two weeks ago, and Rocky is now at five weeks after having his hip returned to its socket with no further injury. 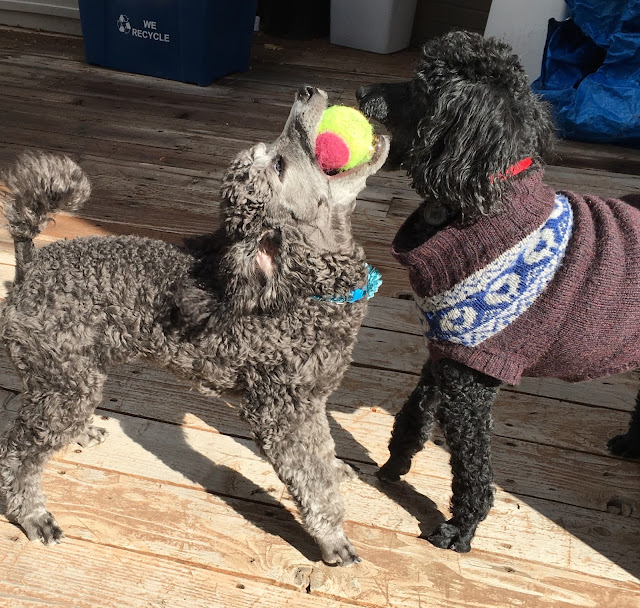 One final mention of donating to charity: If anyone needs magazine subscriptions, candy or nuts, Daphne is selling them in her online store to raise money for Girl Scouts. (She's a Daisy.) One caution, though. The candy and nuts are expensive to ship.

What's on my needles: Dude's sweater vest. The “So-not-my-palette Cardigan” second sleeve is still on hold.

What's on my Featherweight: Doll Jacket.

What's on my iPad/iPhone: Still listening to music for Park City Singers. On my Kindle app, I've finished reading Corinna: A Sweet and Clean Historical Romance by Lauren Royal. It was good. I'm still picking out something new to read.

What's my tip of the week: When making tiny items, such as doll clothes, it's usually easier to completely line them, rather than make tiny facings.

The doll basket was very well done. They got a real bargain at $350. The boys are so cute also!

Congratulations on raising $350!  You really put together nice prize packages with those beautiful dolls.

Comment by Peggy Stuart on October 24, 2016 at 1:55pm
32 cases of confirmed voter fraud out of how many million votes cast? And the moon landing was staged, too. We have some crazy people and some unscrupulous ones who take advantage of their gullibility.

Congratulations on raising $350 for that wonderful organization!  That is interesting about your county going to all mail in ballots.  Here in MO they don't allow voting by mail, but at least you can go to your County Clerk's office & vote early if need be.  I was telling our County Clerk a couple of years ago how convenient it was to vote by mail when we lived in NV.  Here politicians on one side of the aisle believes that it would create too much voter fraud if they allowed that.  It sure would help the elderly, etc. who simply cannot make it to the polls.