High Fiber—Waste Not, Want Not

It was nice to get back to Vintage Stitchers. 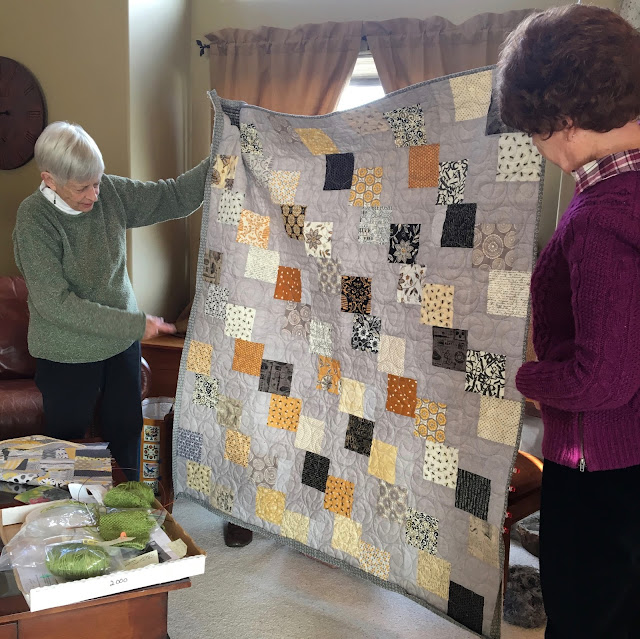 One of the highlights was Carol's Falling Charms Quilt. As often happens, the back is almost as interesting. 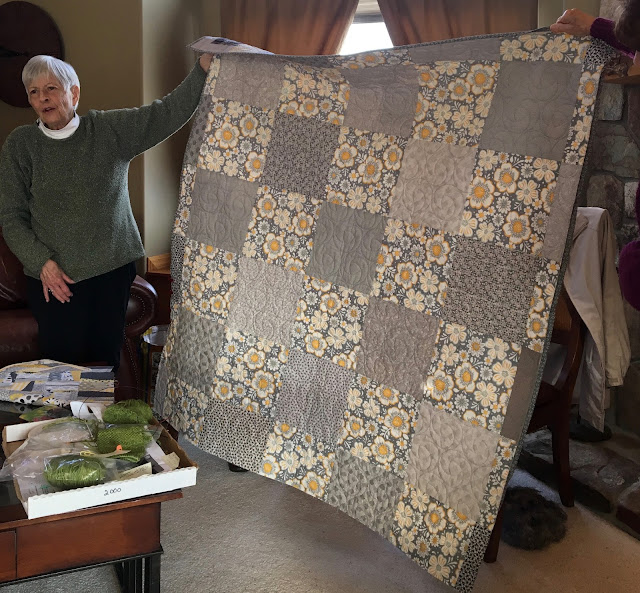 Carol has been playing (for more than 15 minutes) with 15 Minutes of Play by Victoria Findlay Wolfe. She's using tiny scraps of fabric most people would throw away to make larger pieces of fabric for quilts and other projects.

She had made some hot pads and mats to go under hot dishes and appliances, such as her blender. She says it makes it easier to slide toward her when she needs to use it. 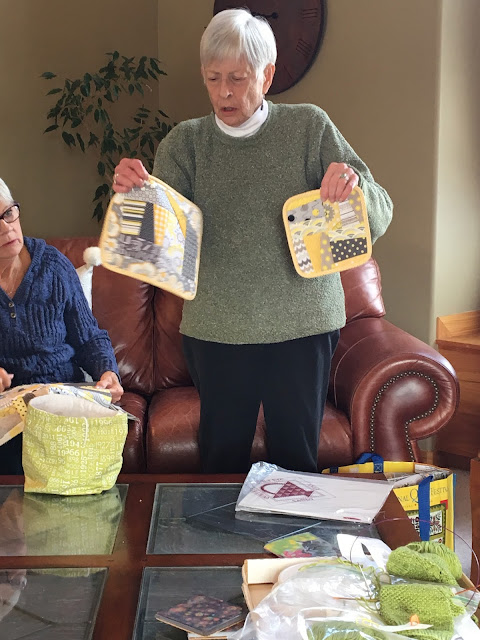 Barbara has been busy, too. 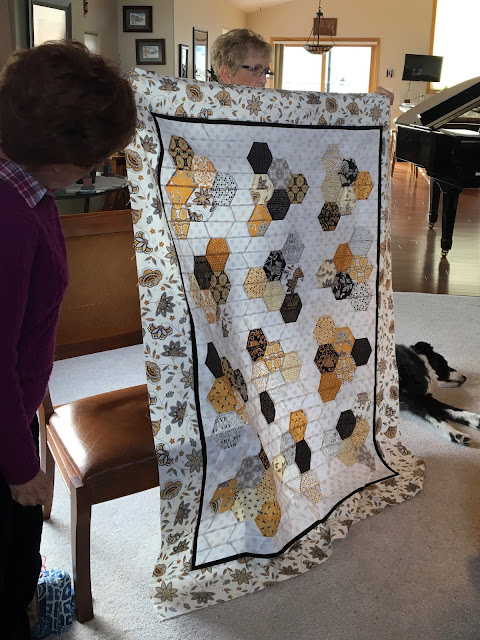 She used the Missouri Star Half-Hexi Ruler to make this hexagon quilt.

She also showed us this amazing cross-stitch project she has finished.

Some of the others were knitting on various projects. I worked on hand-quilting my "Sistine Chapel" appliqué quilt and am making some progress. It's from Mary Sorensen's "Delectable Pathways" pattern. I'm quilting the third panel. When I finish that, I need to quilt the last border of Delectable Mountain blocks, then put on the binding. 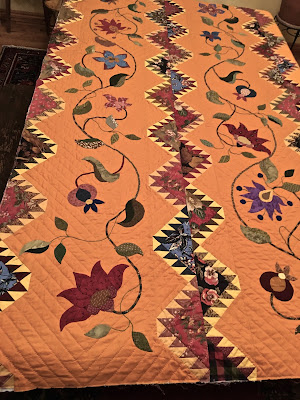 Now that I'm home from our trip, I can block projects, like Vroni's cardigan. 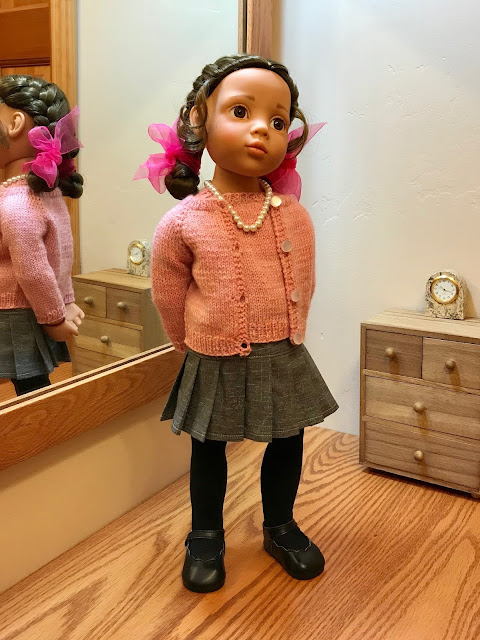 DD's birthday was while we were gone. I made her one of my iPhone pouches. (She wanted it without the logo.) 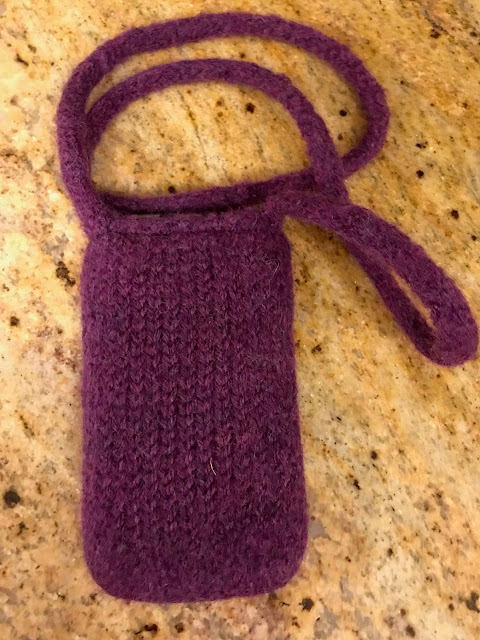 I used Knit Picks Wool of the Andes Worsted and lined it with a batik fabric (I think from Connecting Threads). 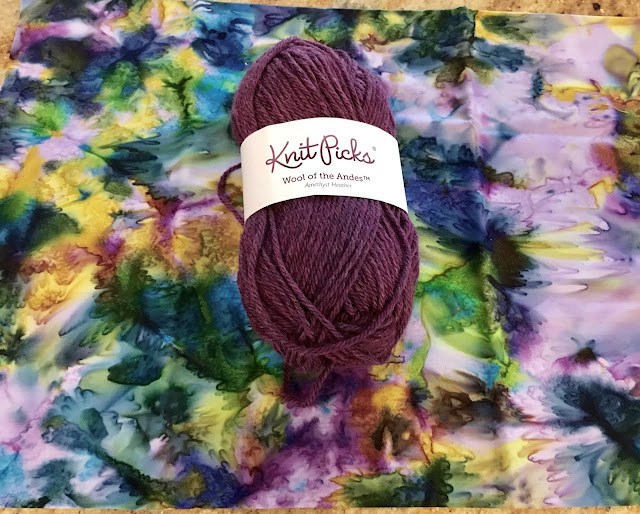 I started on my Frozen Skies Shawl using my birthday yarn. I'm not completely happy with the border, though, so I may frog it and start over. 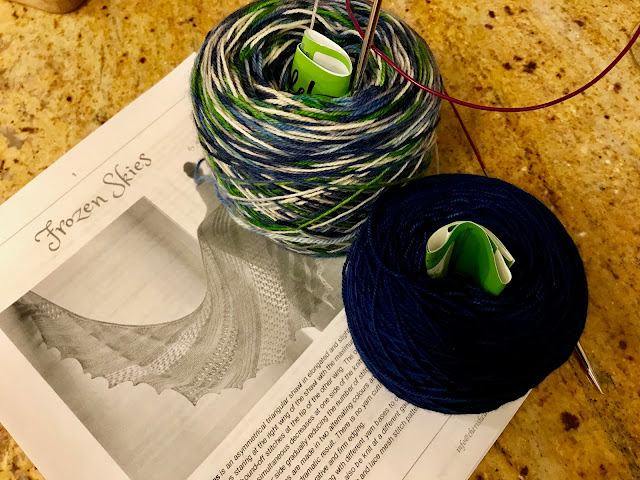 We had a bit of sunshine on Saturday, so we took the pups to Run-A-Muk Dog Park. (They should rename it "Run-A-Muck," because there were a lot of muddy places.) They had a great time, though, and Dusty especially likes it, because there are always other dogs there, sometimes even young ones like him. 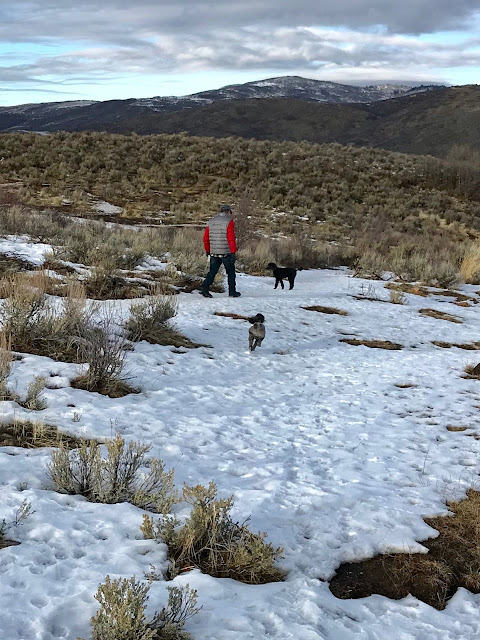 We used the Walk for a Dog app. I really should attach my iPhone to Dusty, because he covers a lot more ground than I do.

What's on my Featherweight: Waiting for possibly more doll clothes.

What's on my iPad/iPhone: Finished listening to the book everyone is talking about, then finished Between Black and White by Robert Bailey (if you like Grisham, you’ll like this author). Then listened to A Bachelor’s Establishment by Jodi Taylor, not her usual, but very enjoyable. Now I'm listening to The Sixth Window by Race  Abbott Still waiting for something on the Kindle app.

What's in my wine glass: Liberty Creek Pinot Noir. Not fantasic, but acceptable..

What's my tip of the week: This week's tip is for hand-quilters. When you come to a stopping place in your quilting, you can turn the needle around, insert it in line with the quilting just past where the needle came out and run it through the batting in the opposite direction past several stitches. You can "slalom" between the stitches if you like, or go around the last one and head back in the other direction. This can be accomplished by pushing on the tip end of the needle so the eye end moves through the batting and out through the fabric. 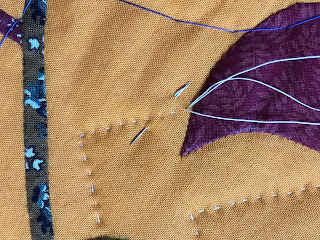 Pull to the outside and snip off close to the surface. No knots to make or to pop through to the surface if someone sits on your quilt.

Far, I guess you could say it’s charming.

Janet, I hate to throw anything out.

Love your blog.  I like your friend's idea of using smaller scraps to make larger pieces of fabric for hot pads, etc.

Pam, these ladies always inspire me.