This week has had it's ups and downs. We managed to get to the dog park with the pups, where Rocky socialized with people and dogs, and Dusty ran wild. The park is close to the neighborhood we hope to live in and where we are staying with DBIL. It's a "free range" park, where dogs can run free, accompanied by their human companions, of course. We met a lot of nice dogs and people. There were water bowls for the the dogs. We needed that, as both dogs ran a lot. 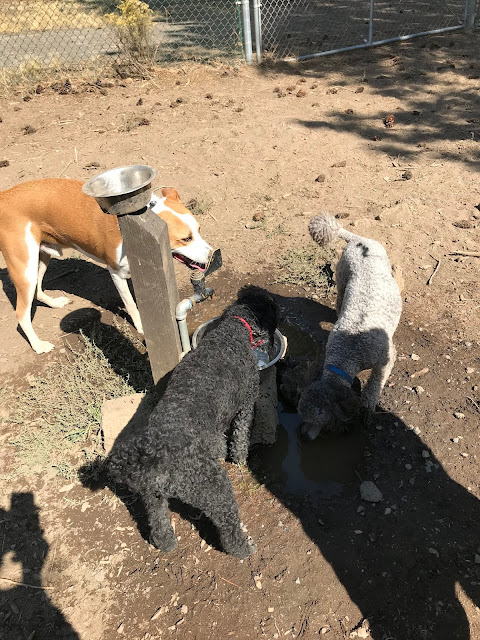 We started Monday morning looking at houses. Most of the ones we saw were not very appropriate, but our agent was trying to give us some choices. There was only one with RV parking in our preferred neighborhood, but we found another one we liked not too far away. Location and a lack of an HOA was weighed against a better house needing less work but for more money. In the end (so far), location won out. A second trip to that home helped us put together a list of things we could see needed to be done before the house was worth what they were asking and the expected costs. We've been watching the market in the area for some time, so we knew what houses went for with the amenities included. It's a nice floor plan with a big yard and was built in 1995. It was clear no maintenance had been done on the home since it was built, although a couple of cosmetic improvements (new carpet and granite countertops) made the photos pretty. Here's the house: 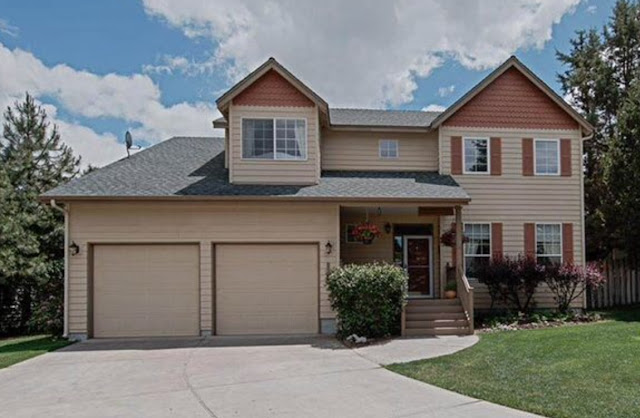 Here's the big yard we wanted. (It includes a chicken run and coop, the perfect place to put the garden.) 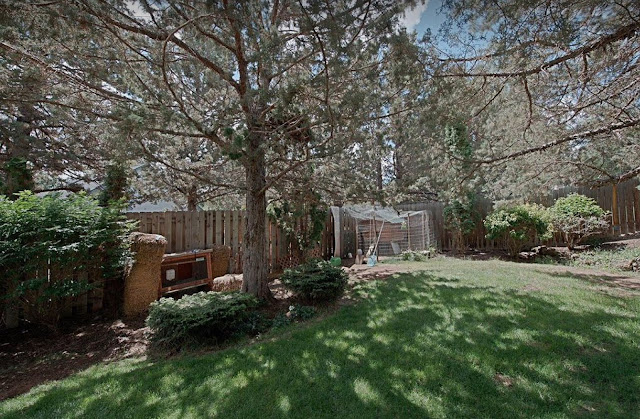 It had some play equipment, badly in need of repair. There was a hot tub "as-is," but at least the water was hot, which was a good sign. 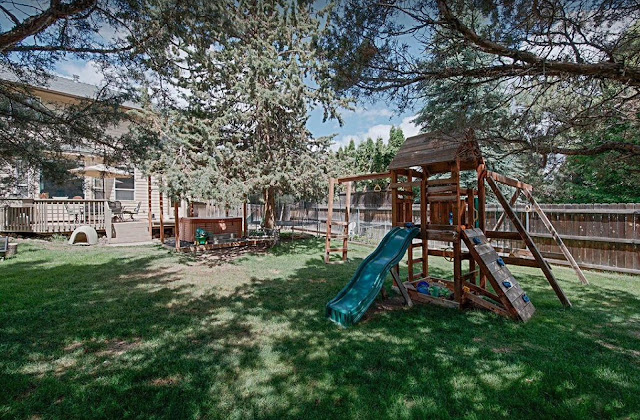 There is a storage shed and a greenhouse, also having seen better days. Those two structures don't show up in any of the photos they posted online, for good reason.

We wrote the contract on Friday, deducting the cost of the obvious needed repairs and improvements (like AC, which most houses in the area have), but not allowing for a whole new roof, which we had no way to evaluate. We included our list with the contract, so they could see what we felt needed to be done. If the inspection (on Thursday) says we need a new roof, we may be back to "Square One." If the sale goes through, this will be my sewing/fiber studio (minus the furniture, of course). It's about 17' X 12', not counting the part on each side of the gable. It should be big enough for the loom and a full sewing/quilting area, but not for the daybed I was hoping to have for guests. (There's no pink remaining in the room.) 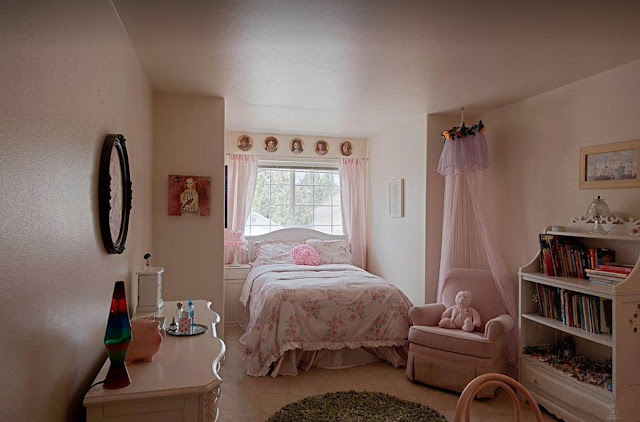 I had thought we could put the loom in another part of the house, as it's very attractive, but, DH nixed that. I've nixed a table full of papers in the kitchen. We'll see how that goes.

The other house we like has a bigger room for my sewing/fiber studio. This room should be able to house a complete sewing area with storage for fabric, my loom and the tools needed for it and a day bed as well. It only had one living area, though.

We should know Friday if the sale is going through. It's set to close October 5th. The sellers put in the contract that they wouldn't pay to fix anything. We think we have that built into the price, though. Fingers crossed.

As we were discussing the houses, DH said it didn't matter if I had a dedicated fiber studio, because there would be dolls all over the house (as if that were a bad thing). Unfortunately, the girls heard him say that as he was coming into the bedroom we're living in right now. I had to take a photo and show you the look they gave him. (I think Jolena had the best "wanna bet?" reaction, although Mariah, being new and not knowing him well yet, looks shocked.) 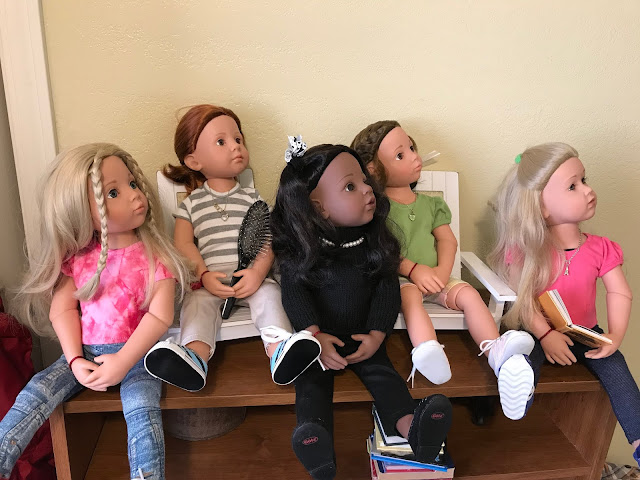 I managed to get caught up again on the stories, writing the first and second stories with Mariah as a member of the cast. The first one, which will come out this week, is about Mariah's arrival and sets up what her role will be. Then I had a sudden inspiration for a followup to that, so I'm scheduled through the end of September. If we do move into the house in early October, I know I'll be busy, so I want to get ahead another story or two.

We went out to eat Saturday night to celebrate DBIL's 80th birthday, which we missed in July because we weren't here yet, our 53rd anniversary on Saturday, and DH's 77th birthday this Wednesday. We went to Anthony's. 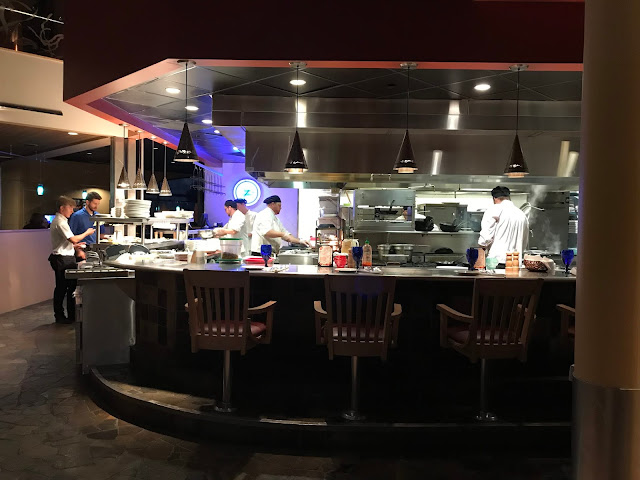 They have good food and good service, and it was a pleasant evening. 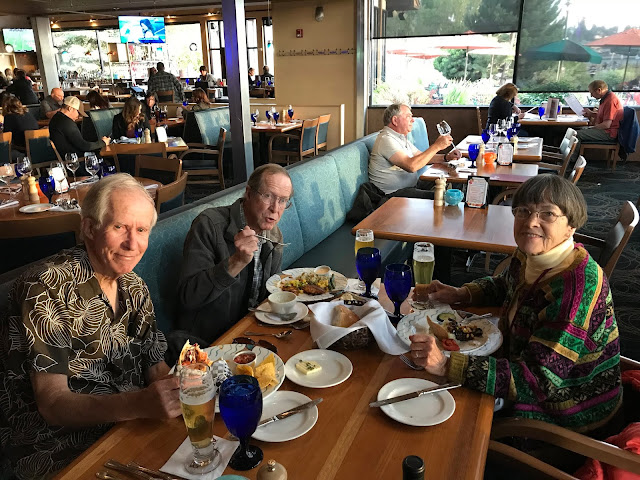 I also managed to register to vote online and get information on how to get an Oregon Driver's License and vehicle registration.

What's on my needles: Still as it was. At least my knitting is out of the trailer and into the house.

What's on my Sparrow 15: Still sitting in our bedroom at DBIL's house. I have a folding craft table in the trailer, if I really need to sew before we get into our new home.

What's in my hoop: Still the Spring Flowers quilt, again progress this week.

What's in The Doll's Storybook: Flying or Lying. This is the last of the prescheduled stories. The first new one, introducing Mariah, comes out next Friday.

What's on my iPad/iPhone: The Innkeeper of Ivy Hill by Julie Klassen. I'm still where I was when the trip ended, more or less.

What's my tip of the week: When you move to another state, carry stamps in your wallet, in case you need to mail in your online voter registration.

Yes, not every year though.  I have been to the  quilt show in Sisters twice.  I love the little town of Sisters when the show is not on though!  The older I get, the less I like the crowds, crowded parking, restaurants & shops, etc.!

That would be fun! Do you come to Sisters for the Quilt Show?

What good news, Peggy!  Keeping my fingers crossed for you that all goes according to plan.  You know, you and I and Ranchmom live at the opposite corners of a (large) triangle here in NorCal/Oregon.  Maybe someday we will be able to meet up!  Anyone else in the area?

Tomorrow's the big day. Nothing standing in the way now but the inspection (and still some paperwork for the lender), and that happens tomorrow. We should know on Friday. Closing is scheduled for October 5th.

I hope the owner's will accept your offer so you can get on with your life. Living in limbo waiting on other people can be frustrating. I'm glad you found a nice doggy park for your pups. They look very happy to be there.  I'm looking forward to seeing your sewing/fiber studio when you get it set up.

We were picky about a few features. Otherwise, it's just a box. We were really hoping for not much work, but we couldn't wait long. We are officially homeless (except for DH's wonderful brother) until this is finalized.

Well, that was quick!  It took us many months to find the mountain cabin we finally bought 8 years ago.  We had sort of given up on the idea, when "the one" finally came onto the market in the right place.

Congratulations!  I hope the closing and the moving in is trouble free!

Janet, I hope you're right. We really want to get in and settled!

Thanks, Pam. We need a house, and there was only one on the market that suited our needs in our preferred neighborhood. We have a back-up house, if this one falls through.

Congratulations.   You will be so happy to be settled in your new home before the holidays.