High Fiber—Windows on the World

Thursday saw the beginning of the installation of our new windows. 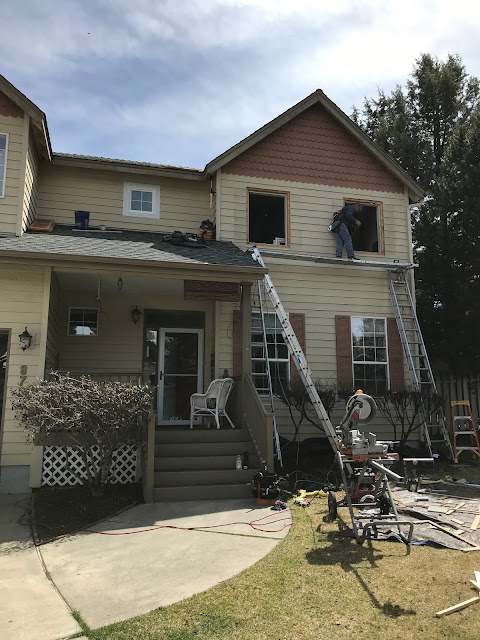 They changed out the most difficult one first (the one over the porch) and then moved on to the master bedroom windows, which would not open.

By late afternoon (as you can tell by the sun shining on the western walls of the house), they were finishing up the windows in our bedroom. 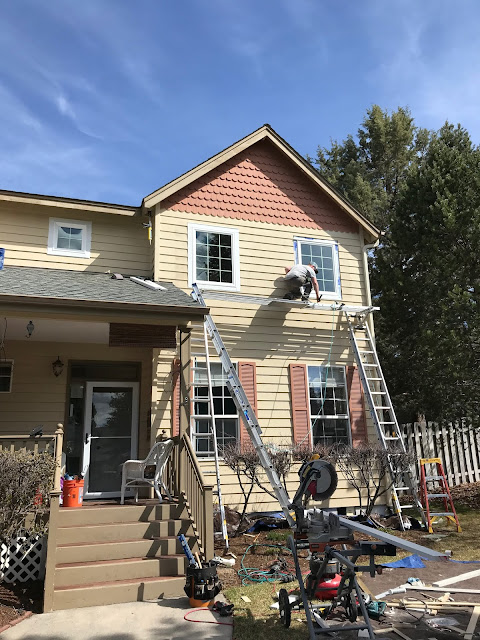 Friday they finished up the upstairs, including the window in my fiber studio, which was badly warped and wouldn't open. (It was a good thing we didn't have to escape a fire!) They also changed out one of the living-room windows, one that's around the corner to the right. 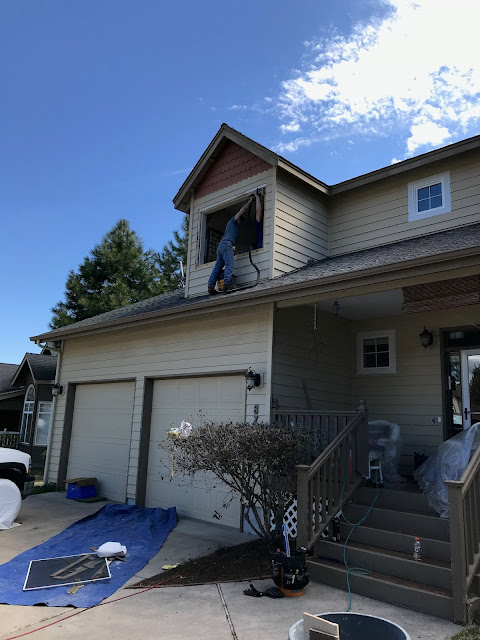 You can see that they are enlarging the window frames, which will change the look of the house a bit. 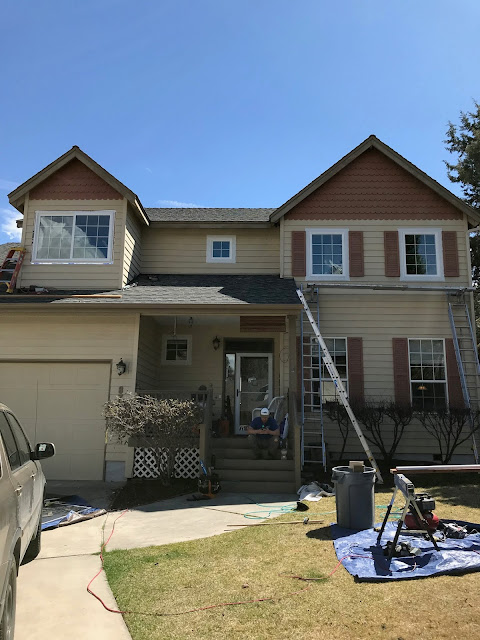 Today they are working on the other two living-room windows and the one over the sink in the kitchen. I should be able to show those next week.

The gentleman who built the rail to our back deck returned to paint it. I think I only showed it covered with a tarp previously. Here's what it looked like before painting. 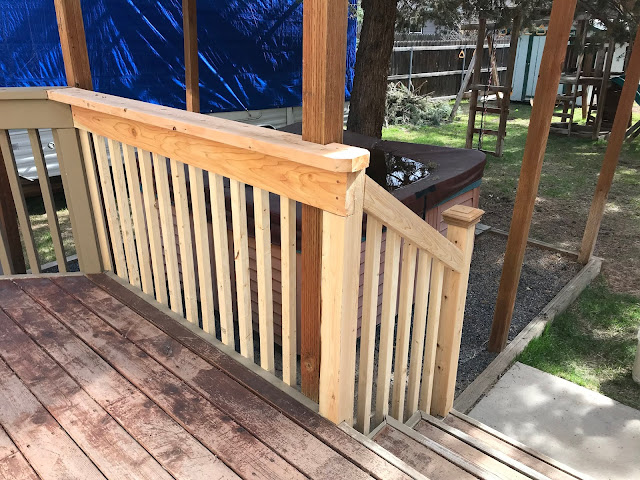 We had a lot of rain, which postponed the painting, but a break in the weather made it possible to get it done. Here's the finished job: 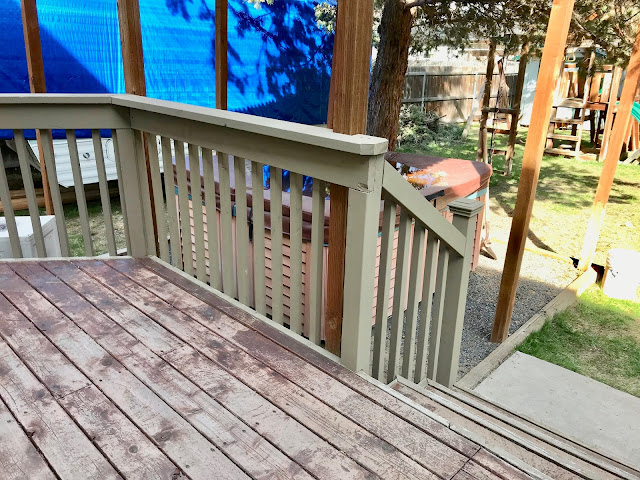 We're looking forward to using the deck, now that the weather is warming up. The warmer temperatures have made walking the pups more fun. I try to get out with them every day, usually for a walk, but sometimes for a trip to the dog park, so Dusty can play with other dogs. Rocky likes socializing, too. 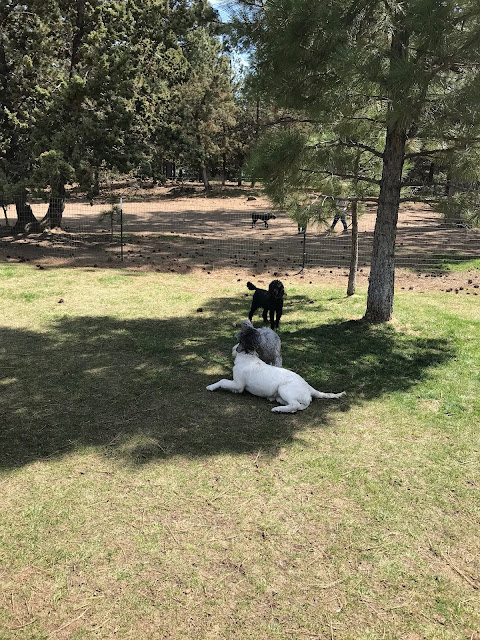 Now that the snow has melted, we are using the Larkspur Trail more. There are entrances to the trail across the street and a few houses down in each direction. Here's what it looks like. 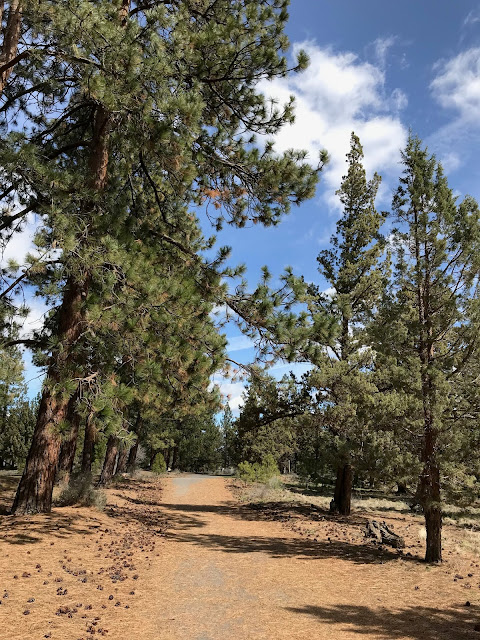 There are frequently people walking or on bicycles, usually with a dog or two. Each entrance to the trail has a poopie-bag dispenser and a trash can. We can include the trail with a walk around the block, as we did on this walk. 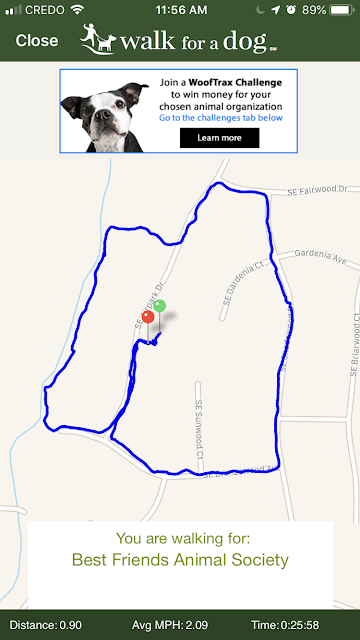 As an alternative, we can walk further on the trail and not use the streets much at all, as we did on this walk. 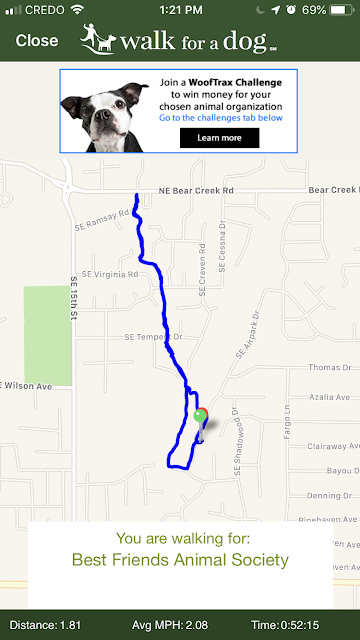 I really like using the Walk for a Dog app on my phone. I know how far I've walked, and the app donates to Best Friends (my choice of dog-related charity) based on how much people who have chosen Best Friends walk over time. Every once in a while, I get an email saying that a donation has been made. It's supported by advertising. 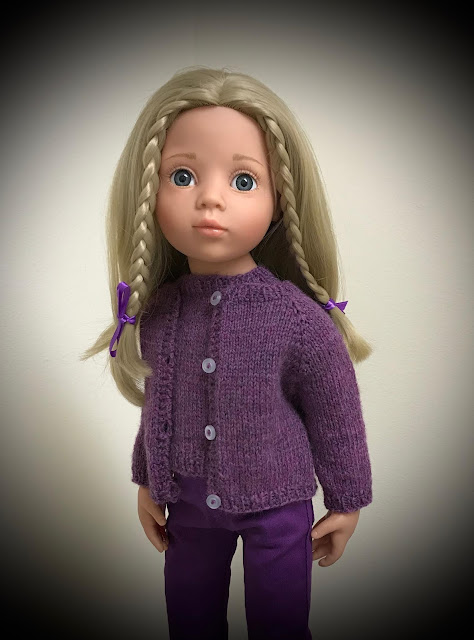 I still want to sew a coat or jacket for the doll, but I will need to buy some suitable fabric first. In the meantime, I cast on a turtleneck for Mandy, who should look good in green. 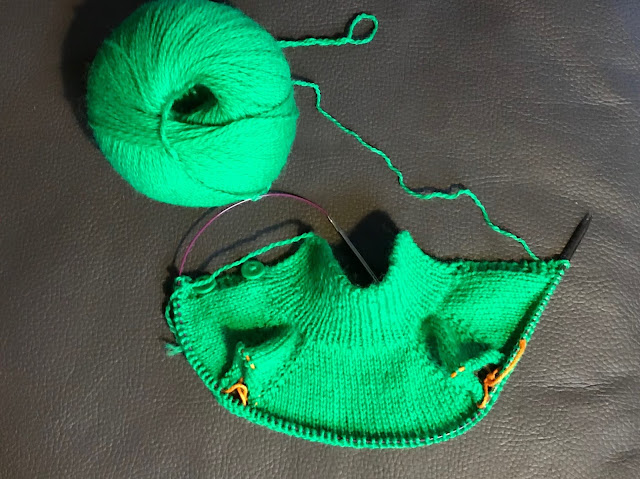 I'm finally making some progress on the Spring Flowers quilt. Here's what it looked like early in the week. 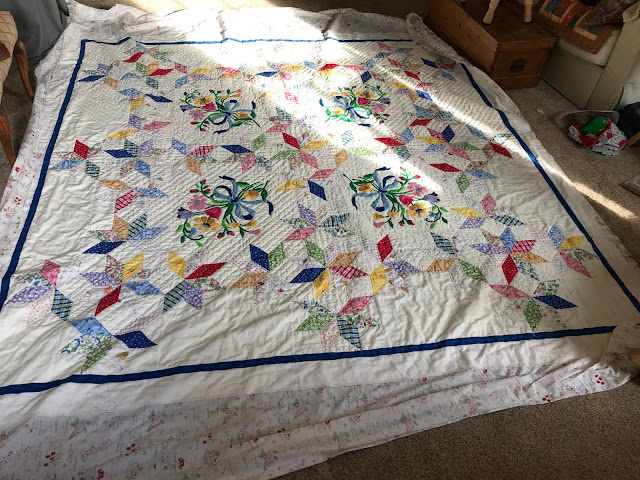 I started in the middle and have been working toward the outside. When this photo was taken, I only had a little more than half of the outer half-star blocks and plain blocks to quilt. You can see the unquilted areas stretching from the upper left of the photo, around the bottom to right side. As I write this, I have reached the half-star block in the center of the bottom of the photo.

I haven't figured out yet how I will finish the blue inner border and the white outer border. I might quilt in the ditch (as they say) and then do some kind of cross-hatching, but we'll see. It will be nice to get it done.

Holy week was a busy time, because the choir at Trinity was to sing for the Maundy Thursday service, then the Easter Vigil on Saturday night (which starts out somber and ends up almost a party), followed by two services on Sunday. There was a lot of music to learn, and the three services in such a short time was exhausting, but it went well, I think, and I feel like I'm contributing something useful and appreciated. 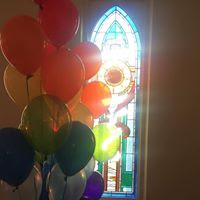 The Doll's Storybook this week is called Celebrations. It showed Charlotte preparing for Passover with a bit of the story of how the Israelites escaped from Egypt. (Much of the story is too gruesome for dolls or small children, and including all the details would have made the story too long anyway.) I felt that most of my readers are more familiar with Christian traditions, so I focused on Passover. However, the story does show Veronika out in the garden, hiding Easter eggs. 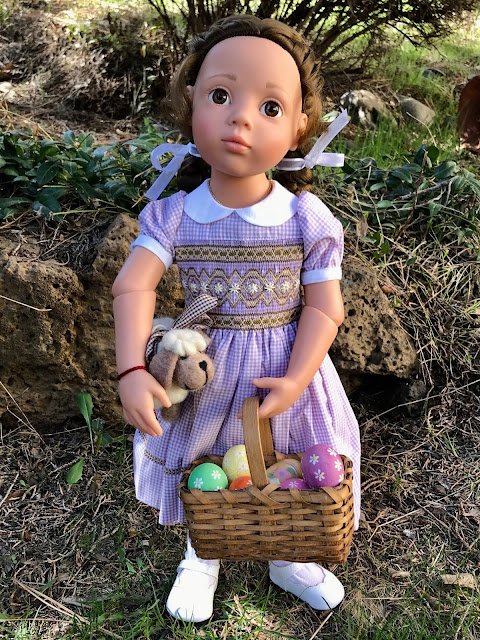 The dress in the photo is what she was wearing when she came to live with me. It was hand-smocked made for her by her previous owner, a gentleman named Simon Purple. Her original factory outfit was still available to purchase separately, so I was more than happy to receive this truly one-of-a-kind dress instead.

For some cuteness this week, I thought you would like to see this photo of our granddaughter and fellow doll-lover Daphne, enjoying the ballet. 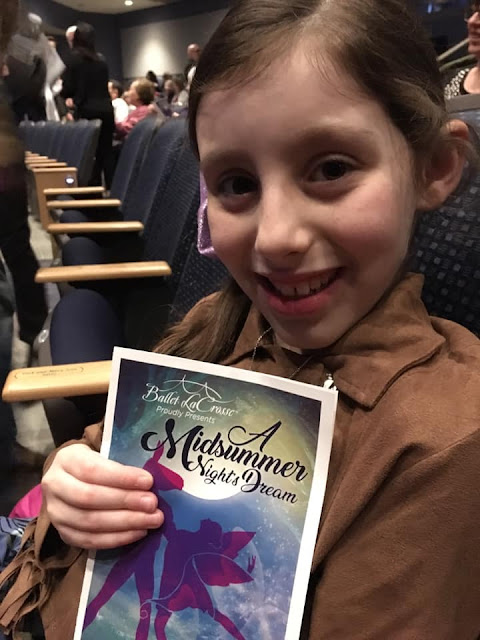 I hope all my readers had a wonderful holiday and a happy Earth Day!

What's on my needles: Wonderland Turtle turtleneck sweater for Mandy in Macaw Palette.

What's in my hoop: Still the Spring Flowers quilt, with quite a bit of progress made.

What's in The Doll's Storybook: Celebrations. Charlotte explains about Matzoh, while they fix the food for her Passover Seder, and Veronika hides Easter Eggs.

What's on my iPad/iPhone: Finished listening to Molly by M. C. Beaton. Then listened to The Parfit Knight by Stella Riley, which I really enjoyed. Riley is a new author for me. I found the novel to be entertaining and authentic and included a lot of subtle humor. One of the main characters is blind, which made it interesting from the standpoint of a character with a disability. Both of these novels were included at no extra charge with Audible's Romance Package. Although the predominance of the books available in the package are bodice-rippers and books with a naked male torso on the cover (which indicates to me that the novels are more X-rated than interests me), there are some sweet, funny stories included, and many of them have a "steaminess" rating available, so you can find out ahead of time whether the story is likely to suit your taste. Although I prefer a more balanced diet of books rather than just romance, I'm in the free trial time, so I want to evaluate if it's worth, to see if it's worth it to pay the monthly fee. Besides, I'm listening to as many of M. C. Beaton's novels as I can, because at 4-5 hours each, it's a shame to waste a whole credit for one, so I'm now listening to Sir Philip's Folly by M. C. Beaton (aka Marion Chesney).

What's my tip of the week: A plastic lid from a large jar makes a great coaster for a wine bottle to protect your tablecloth or countertop, or for that bottle of dishwashing liquid, a bottle of spray cleaner or a steel-wool soap pad under the sink. This one came with a big plastic jar of roasted nuts. 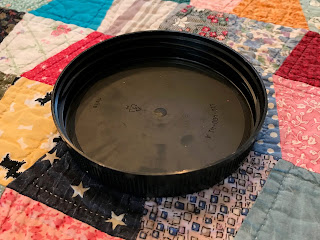 Irene, I'll have to haunt their Facebook walls. I don't have a quilting group here (yet).

Nice blog Peggy. Your house is looking great with the new windows and railing on your deck. Your quilt is beautiful. It will look nice hanging on the wall. I was glad to see the two blocks from Vintage quilters. I also miss seeing what the girls are making.

I put the Pine Burr quilt up on my own, so I think I can do it by myself. The Spring Flowers quilt is 92" square, and the Pine Burr quilt is only 88", but there is a batten running through a sleeve to keep the quilt on the wall, and the batten sticks out several inches on each side. I'll just have to be sure that the sleeve has spaces in the right places for the nails to reach the batten.

Terrific idea, Peggy!  I change out the wall sized quilts in my entry hall with the seasons.  It's kind of a nuisance to take them up and down, but I love the variety.

I agree! Carol is very talented and skilled.

I'm looking forward to seeing the quilt on the wall, too. I think i might change out the quilt in our living room with the seasons, using the Pine Burr quilt for Fall and Winter, and the Spring Flowers for Spring and Summer. They are close enough to the same size.

Well, whatever Carol was thinking, she certainly knows how to make it come out right!  Perfect blocks!

I want to see your Spring Flowers when you have it hung on the wall!

"Just finished these two nightmare blocks. The same pattern in two different fabric lines. Over 60 individual pieces required to begin each block! Argh! What was I thinking?" Fun blog as usual Peggy.  I must say that I do miss the show & tell you used to have with members of  your quilting group in Utah, but I still enjoy the rest of your blog very much.  I too love your quilt.

Me, too! I just need to find wall space for it without having to cover up windows and doors! After all the hand work in this, I don't want to put it on a bed.

I love your spring flowers quilt!