This was the week of the Rose City Yarn Crawl. (This is Starlight Knitting Society.) 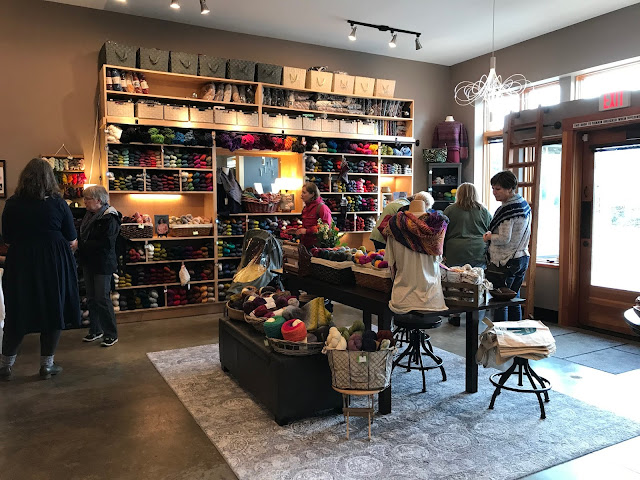 We were worried about the weather for a week before we left Bend, even on the day we left, because it was snowing off and on, and more snow was forecast. However, the snow stopped about lunchtime, and the roads were reported to be clear, so we left about 2:00 PM. We did encounter snow at the passes (there are two), but it only slowed us down a bit. 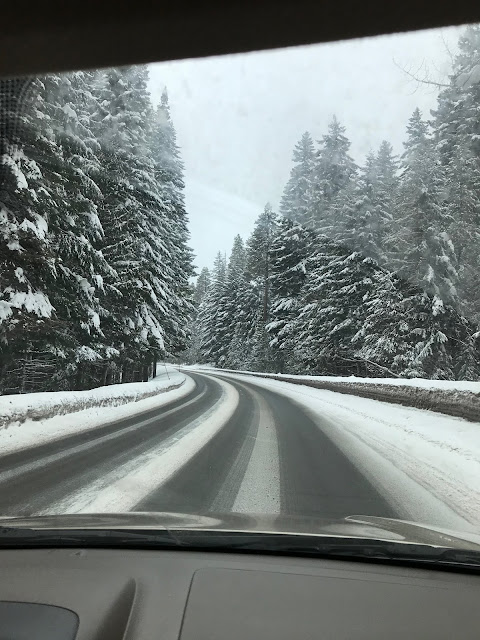 Daughter-in-law Alexa and I made the project shawl. (The crawl shawl?) This was mine. The photo was taken at Northwest Wools in Portland. 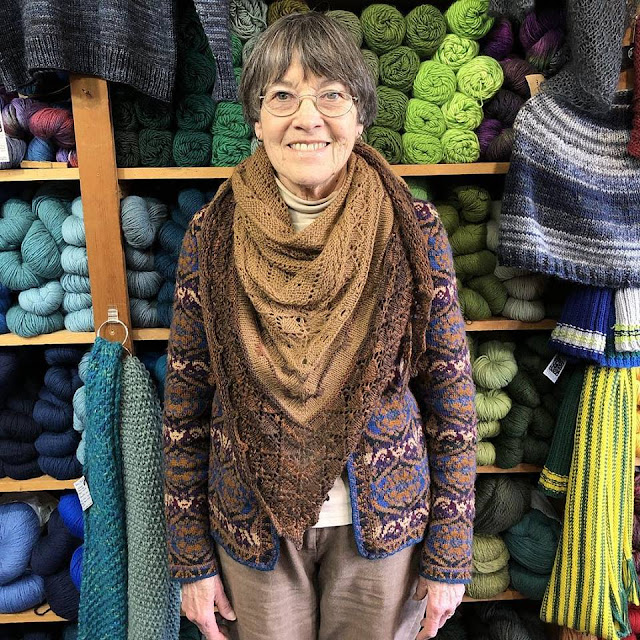 Alexa had her photo taken, too. She used a different BO, one without the picot points. 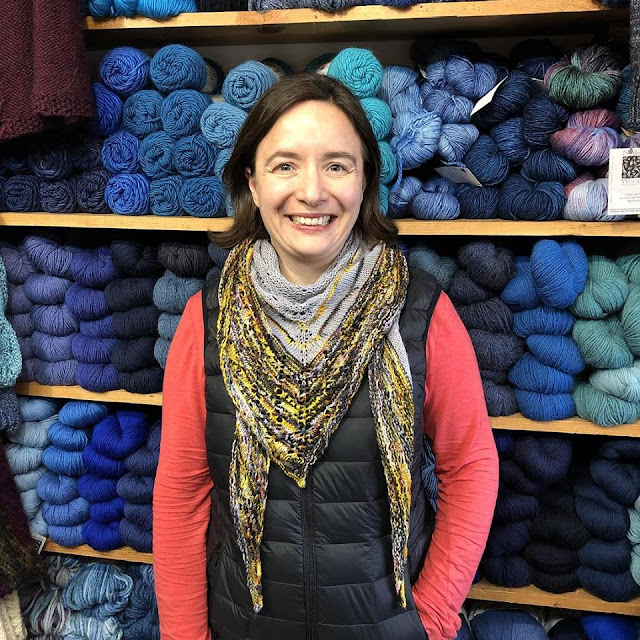 Thursday, we visited eight (!) yarn shops, starting with Blizzard Yarn and Fiber in Vancouver, Washington and ending up at For Yarn's Sake, where I took this photo of a partial mannequin wearing the knitted shawl project. There was a crocheted version for the crocheters. 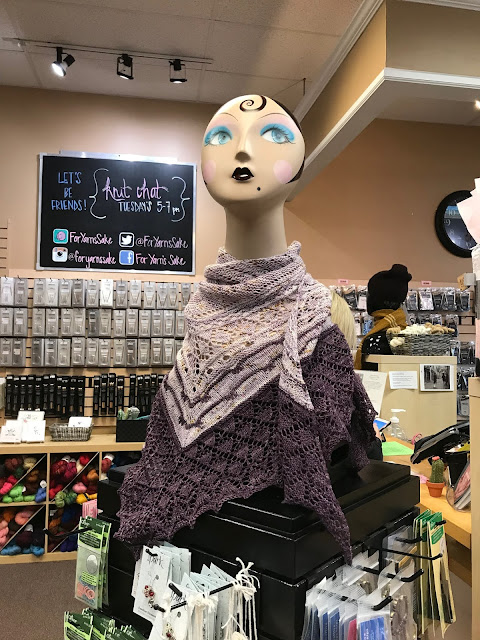 We only had two shops to visit on Friday, but we had another event planned for 12:45, so we visited the one in the morning and went to the last one, The Knotty Lamb Yarn Shop in Forest Grove, where they took this photo of us with our completed passports. 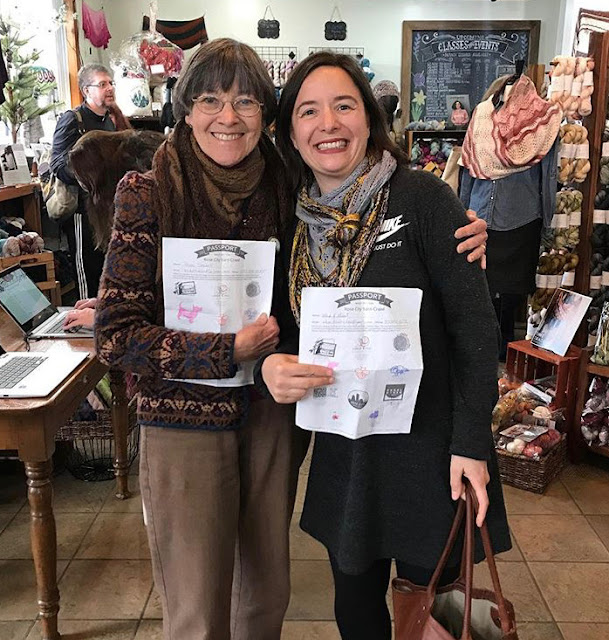 I'm trying not to spend too much money, but bought a few things to support the yarn shops. Here's most of my haul. (That drawing under all the yarn is a map of Northwest Wools, which was handy, because the shop was crowded, making it hard to find what you're looking for.) 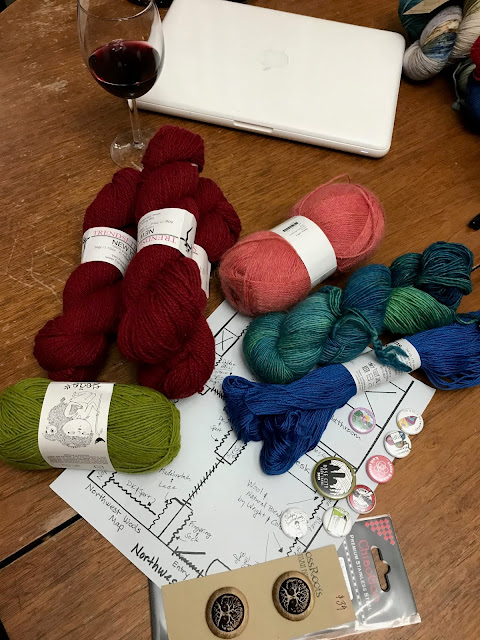 These items didn't make it into the above photo, so I had to take another one. I also bought a size 40 3.75mm needle at Blizzard, because the cable to the interchangeable needles I was using for the shawl I was knitting as we drove came out of the metal connector. 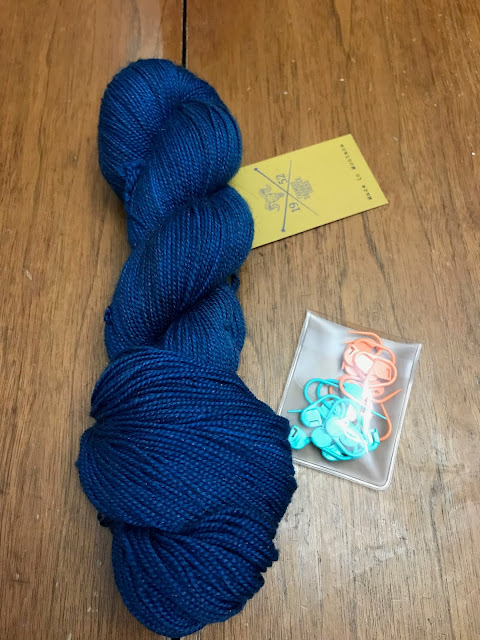 We found these wonderful buttons at The Knotty Lamb. We each needed two buttons for a project, so we split this card of four. 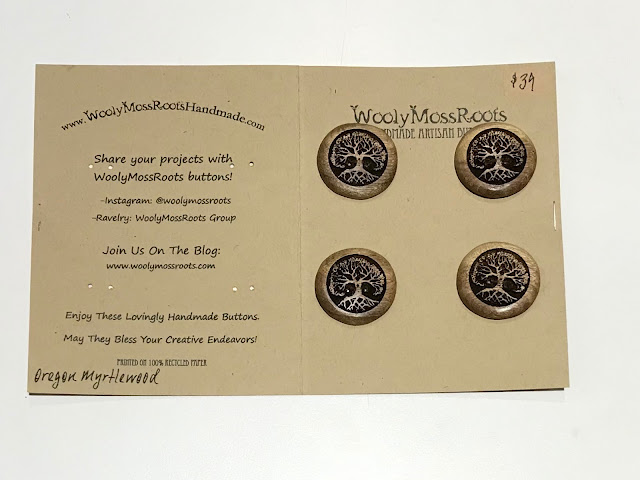 The Event we had on Friday was a visit to Laika, where our son works as a computer special effects technician. They gave me a name tag. 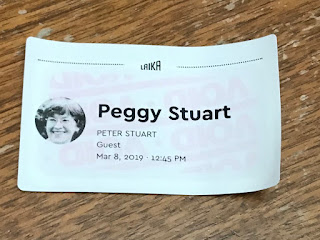 Laika, if you don't know, is a film studio in Hillsboro, Oregon. The films they have produced are are Coraline, Paranorman, Boxtrolls, Kubo and the Two Strings and Missing Link. The process they use is stop motion, but they use computer special effects for things that can't be depicted by stop motion, such as water, steam and fire. This video and this one will give you an idea of what they do, if you're interested. Missing Link will come out in theaters April  12th. Here's the trailer.

They collected our cellphones in the lobby, although our son (their employee) was allowed to take this photo of us as we sat on this sofa from Coraline. 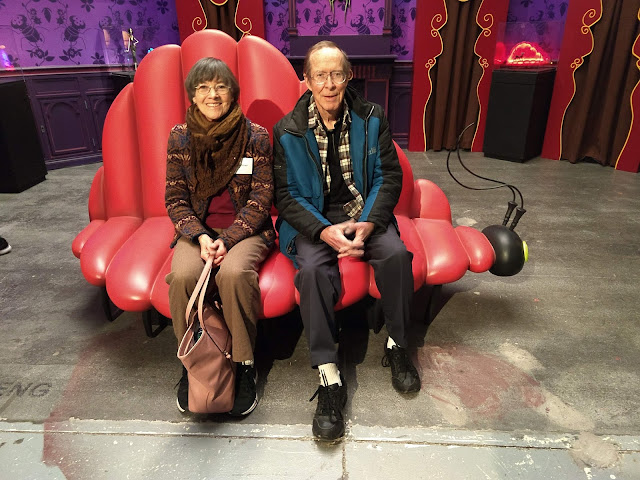 We had to sign a nondisclosure agreement, so I can't say much about what we saw on the tour, but I can tell you a couple of things, like the puppet for Mr. Link from Missing Link is the most complicated puppet ever built anywhere, and that it takes 24 still shots for one second of film. I can't wait to see Missing Link. We will go on April 12th.

Because of my hobby writing and illustrating stories for children using photos of dolls, I found the process of dressing, repairing and posing the dolls very interesting, as was the discussion of scale for fabrics, and lighting for photos. After the tour of the studio with other people (friends and family of employees) we went to see where Peter works, which was across the parking lot. Here we are in the lobby. 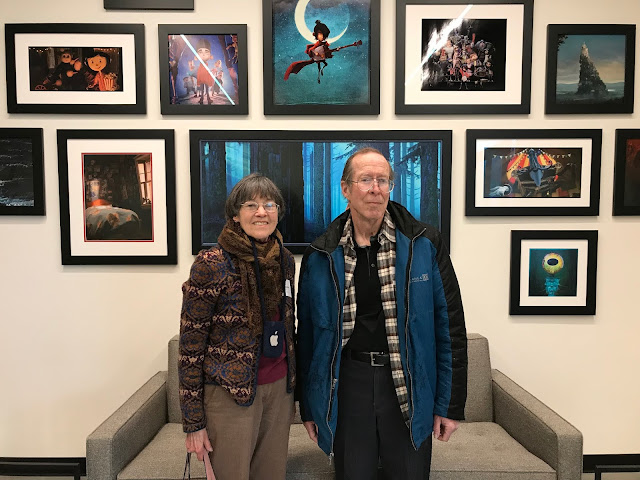 His "office" is a huge warehouse divided into cubicles with lots of computers. It was just after lunch, so some of the people who work in that department weren't there. The huge room had a lot of empty computers, because they are currently between films. They keep a small permanent staff and hire additional staff members when they need them. Peter is part of the permanent staff.

On Saturday we went to David Hill Winery in Forest Grove for some wine tasting with Alexa's parents. Here's what we were tasting:

We substituted their Gewürztraminer for the Muscat Port, but sampled it with the white wines. It was lovely. We had a nice time chatting while we sampled, and I got some knitting done. 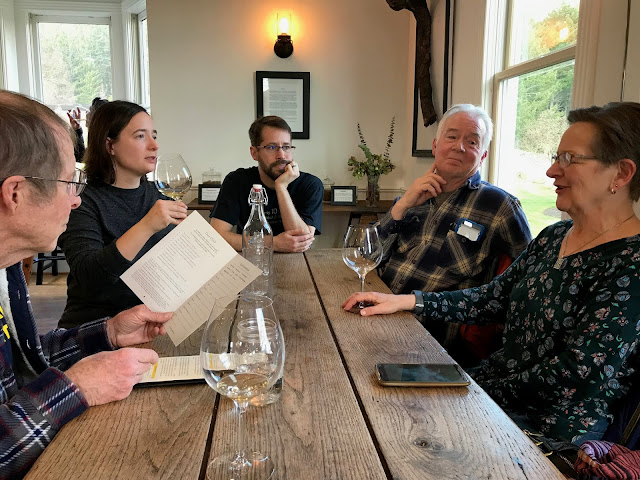 We signed up for their wine membership. The kids are members, so they can pick up wine for us when they get theirs. Then they can either bring it to us or we can get it when we visit.

We returned home to relieve the babysitter and had a nice dinner of paella. (Prep went quickly, with so many sous chefs!) 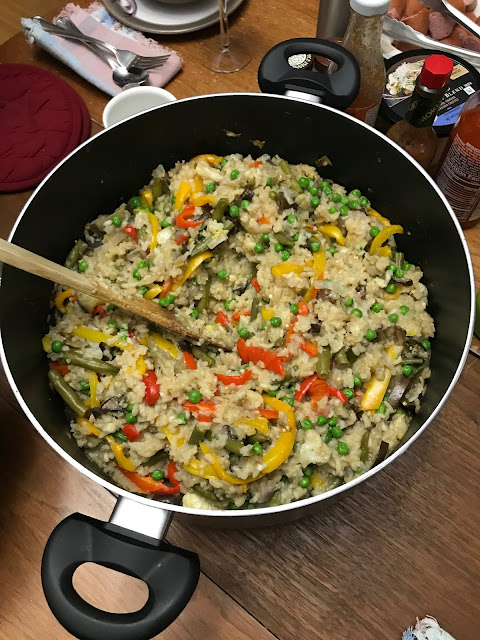 The pups were worn out from playtime with Louis at the school and the walk there and back. 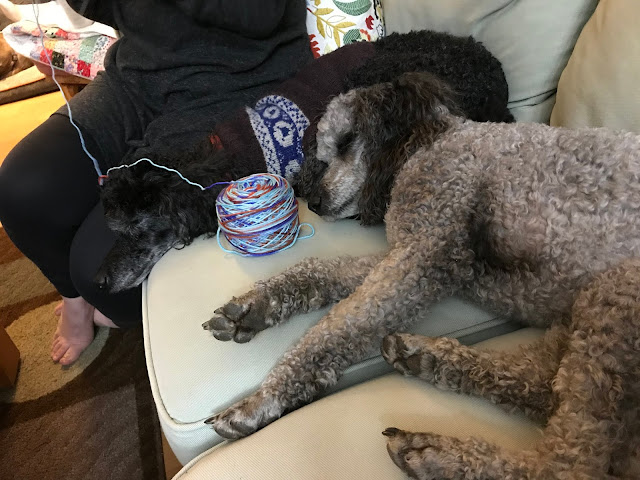 I got a lot of work done on the Coastal Skies Shawl I started a year ago before I got busy with the move. It's amazing how much knitting you can do when you're driving if someone else is behind the wheel. Here's a photo, but I have a lot more done since I took this photo. 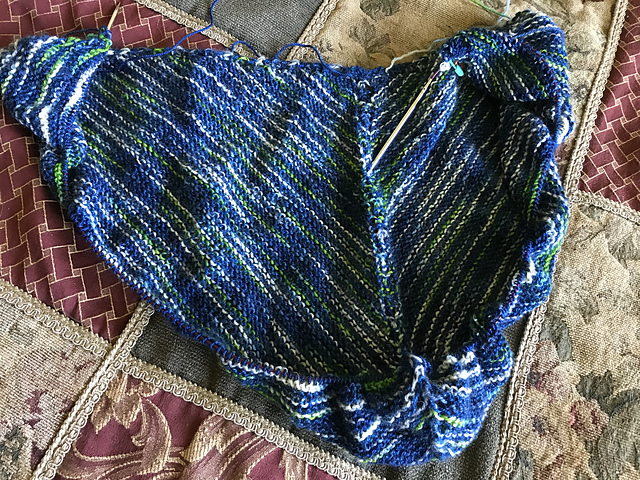 Before we left for the trip, I finished a jumper dress for Lotte. The Pattern is 40 Top Down Trio by Jacqueline Gibb. Here's my project page for the dress. the bodice came out a bit big, so when I make this project again, I'll go down a needle size. The fit is better with Lotte wearing a turtleneck sweater underneath. 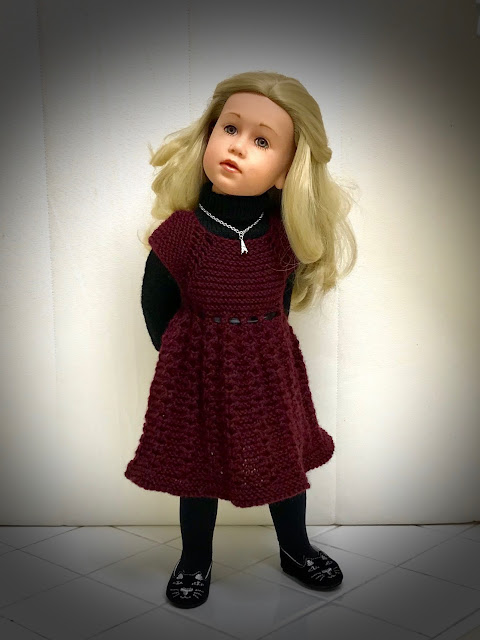 After I finished the dress, I started another sweater for Billy. I'm using another of Jacqueline Gibb's patterns, the 42 Shawl Neck Sweater. I brought this project (and Billy for fittings) on our trip to Beaverton. I went down a needle size, so I thought the sleeves might not be long enough. 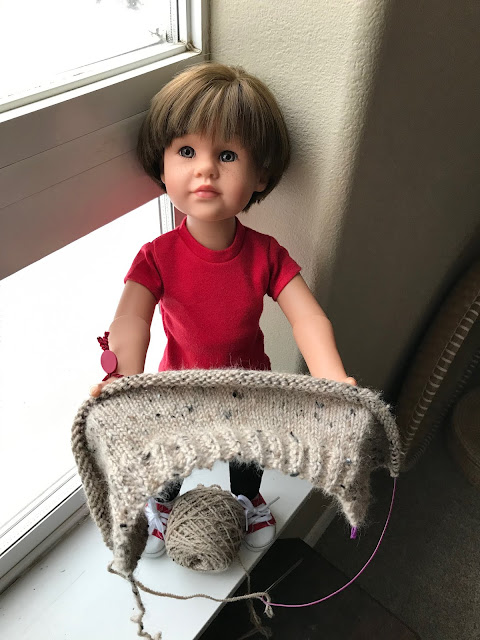 The yarn is Knit Picks City Tweed DK in "Chipmunk." I have the body and the collar done now, so it's on to the sleeves.

I wonder if our house in Bend is still undamaged after all the snow. We are returning home today.


What's on my needles: Shawl-collar sweater for Billy.

What's on my sewing machine: Waiting for my return.

What's in my hoop: Still the Spring Flowers quilt. I hope to get back to it this week.

What's in The Doll's Storybook: Soft, Warm and Fun to Make, about how yarn is made.

What's on my iPad/iPhone: Listened to Holding by Graham Norton, then listened to The Wizards of Once by Cressida Cowell and then The Desirable Duchess by M. C. Beaton. Now listening to Music in the Hills by D. E. Stevenson.

What's in my wine glass: David Hill Estate Pinot Noir, which the winery had on tap. You buy the bottle, which has a nice stopper. Then you can bring it back to get refilled, like a growler. This is a very nice wine. I don't know if it's widely available.

What's my tip of the week: Coconut cream makes a good substitute for dairy cream in most recipes.

Knit Picks is my favorite yarn store, but I try to patronize the LYSs, too. A group of ladies flew in to Portland from Chicago, I understand. That’s a lot more than 600 miles!

Followed your link to the trailer for Missing Link.  It looks like it will be a delightful film!  It sounds like you had a great time on the Yarn crawl.  Most of my yarn purchases need to be on-line, as I don't think there's a yarn shop closer than about 600 km from our little town.  Lotte's dress is beautiful.  I've about given up hope for Spring!  Yesterday we were in the middle of a blizzard, and today it's snowing again but at least the wind has stopped.  It sounds as though your spring is late as well.