If any of you who read my blog posts will be in the Melbourne, Florida area August 2-30th, please stop in at the Eau Gallie Library to view an exhibit  being put on by me and other members of the Dirty Dozen Fiber Artists. You can see the flyer below for more information. Hope to see you there.… Basting a quilt, either with thread or with pins, has never really been high on my favorite quilting activities.  Lately it has even become more of effort.

I have never been able to baste a quilt on the floor.  Injuries to both my knees, resulting from a car accident when I was in my 20s, has kept me from kneeling for any length of time for any reason.

I used to go into the church fellowship hall, set up some of the 8-foot long tables, push them together, layer my quilt…

I have finished the karate painting of my twin granddaughters.  All that's left to do is sign it, and spray sealer on it and then send it off in the mail.

Thanks everyone for all the wonderful comments as it progressed. I have started drafting the picture for doing it as a thread painting. Once I get it started, I'll post its progress.… Small project leads to bigger one

Yesterday I set out to cut scraps into different size squares, depending on the size of the scrap.  I hauled out my box of scraps and started sorting them in colors stacking them on my "double" bed. I had so many scraps that I ran out of space on the bed so decided to go to WM and buy another stack of those plastic drawers. I got two stacks (6) draws. Then the task was to make room in my sewing room closet for this extra set of drawers.  This was no small task hauling everything out of the…

We are half way to Christmas!
Better get those machines humming!

Hubby and I went to pick up my machine from the Viking store. The gal that works there is a real sweetheart and enjoys her job. She was treating the machine like it was my baby. When we left the store, hubby was laughing at her calling it my kid. I actually felt like something was missing in the house for two weeks!
So, I went down and hid one of his bows for hunting. We were having dinner and he asked if I'd been downstairs. Why????
I just think something is missing but can't figure… Continue

Don't you just hate it when you KNOW right where you put something, but when you go to retrieve it, it isn't there?

About a year ago, we had a large amount of hard rain in a short amount of time, which caused flash flooding.  While our house sat above the floodwaters, we had seepage in the basement.  This, in turn, resulted in major cleaning, purging, reorganizing, etc.  You would think that would be a good thing, right?  Except for one thing...

I CAN'T FIND ANYTHING!…

I've made some progress on the "So-not-my-palette Cardigan." … 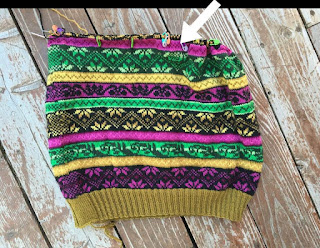 Hi everyone! It's been while since I've posted. Life always seems to throw something at me.

I've been busy quilting for customers and when I'm not doing that we have been working in the yard. The weather has been so crazy, it was cool for so long and then summer can in at full force and it's HOT!

DH and I are going to a wedding this afternoon, one of the guys he works with. I have known about this wedding since December, and had plenty of time to prepare but for some reason I…

The Clemson U quilt These colors just don't photograph well, it is purple and orange and boy, am I sick of this color combination.

Been away on vacation visiting my son so had to put this on hold.  Now that I'm back home, I've taken your advice and simply quilted in the ditch and a meander quilt pattern in the borders.   Finally it's ready for the binding which is cut and…

As some of you might recall, I made a vow to get as many of my older UFOs quilted, bound & labeled as I can this year.  I finished another one yesterday.  This is made from blocks I received in an internet exchange several years ago.  We had to choose a block that represented fall.  The blocks could be any size we wished so long as they were divisible by 3.  I love the challenge of fitting different sized blocks together.  This quilt had the additional challenge of having 13 blocks.  I'm… I took my machine in for a service…

I have been working on the karate painting of my twin granddaughters for a little while now. It is only the second portrait painting I have done and will be glad when I really paint faces without it taking weeks to get them to look human!

I still have a little tweaking to do and them I'm going to call it done! My next step will be to start drafting the thread painting and/or art quilt I hope to do using the painting as a guide. Must say this was fun to do as I love the bright colors…

This week seemed like a good time to start in on the treadle cabinet restoration project for a 4 drawer cabinet that will house my Singer 66.  I bought the cabinet from e-bay, knowing it needed some TLC.   It was missing the center drawer, but I was able to replace it with one found on e-bay.  The drawers all had their original hardware, which is somewhat unusual for vintage pieces, but the case was missing a piece.  The price was very right, so I figured I could put some elbow grease into…

I found time to knit this week. I have about 2” to go before I have to start the armhole steeks on my “So-not-my-palette Cardigan.” It’s fun playing with the colors,… I have had a very productive week.  One quilt top finished, six pictures framed in the frame shop and one book completed.  I will rest next week!

My new way to store fabric in draws.

Yesterday I spent organizing fabric in my draws and on shelves.  I decided to make it easier then pawing through a draw for fabric that I would stand it up.  Do any of you girls store your this way? I know that doesn't make any sense but I have not had a good 2016.  I just checked and my last post was a month ago when I promised to work on my quilt during my next vacation.

Well that was last month.  Mom was in the hospital back in April.  I could tell she just wasn't recovering or eating much.  Brother and Sister started pitching in a bit more, not much but a bit.