Vintage Stitchers met at Marilyn's. She met us at the door wearing this apron Barbara made for her: She was working on a quilt for fall that will include this machine-appliquéd pumpkin block: … Lookee what fell into my lap....

Hubby was walking around the lake last week. He came in and grabbed his keys and headed out, about 5 minutes later he came in with this treasure: It was sitting alongside of the road with a free sign!!!!

He looked around to see if someone going to say it was a mistake...but, it's in my house now!!!

I have a good friend whose daughter will be married next… I wanted to share a photo of our antique quilts at our recent quilt show in August 2015.   When you walked into the church you were struck with a sense of awe!  These were most family quilts.   I was thinking about all the wonderful ladies who made these… For my Gifty Galore project, I made these cute little patchwork trivets with circular quilting from the … We have the most beautiful Little Quilt this month. Two of my favorite elements with the September Little…

I have a BIL who lives and breathes the SF Giants even to the point he has his own "uniform".  Many times over the years he has asked me to make him a quilt showing their logo, but never could make him understand that fabrics like that are not always available.  A few weeks ago I received a notice from AQS that they were selling fabrics with the logos of all major baseball leagues so I immediately contacted him & told him if he would pay for the materials, I would finally make him a…

I can't believe it!

I hardly ever take the time to custom quilt my own stuff, but business slows down in the summer which is ok and gives me some time to work on my own projects, as well as keep up with yard work.  I have been busy trying to finish up the UFO's that are cluttering up my closet and this is one I finished and had enough backing to actually be able to quilt it too!!  I'm happy with how it turned out.  My greatest compliment was when DH was looking at it and pointed to the feather border and said,…

Think I'm going to leave this alone for a while until the painting tells me the next way to go. Not totally happy with the sky or the moon rise, but it's getting there. Need to do a little more with the water in way of shadowing and work on the splash. I thought about putting in another dolphin; however, with the way the current one is situated, to add another would be too crowded. Perhaps one at a later date.

I do appreciate all the comments and input, it is very helpful.… I have worked a little more on the painting. Still have to work on the dolphin, the splash of water and adding the ripples. It still needs something, but can't quite put my finger on it. Oh well, it will come when its ready to. I really like this blog.  But I don't visit often - and post even less!  I am actively sewing and quilting, though.  These pictures will prove it:  The last time I posted about this quilt, called "Knight's Quarters, I had just finished the center block.  I still had all the borders to assemble and then get it quilted.  That happened several years ago!  It's now hanging on the wall of our bedroom.  I had it quilted in 2013.  THAT'S how long I've been gone!…

My fabric needs to be more organized, so that's what I've been attempting lately.  It is a challenge for me.  Should I sort strictly by color?  Theme?  Coordinating fabrics?  As I sort, I'm finding I mentally put fabrics together for projects, which derails the organization!

I like the idea of sorting by color, so that when I do pick a print, I can just go to the different colors to find coordinating fabrics, but I'm finding that easier to say than to do.    If I do sort by color,…

Quilters! Finally, I have some quilts to show you. But first a little food. 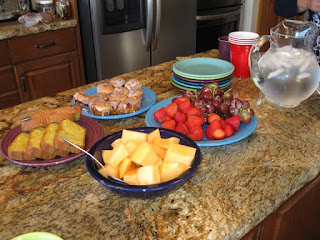 Vintage Stitchers met at Janet's on Thursday. Marilyn brought this embroidered Christmas quilt center to show us. Now to put the borders on.…

To Applique or not to Applique?

I've finally finished the top to my Great-niece's baby quilt.  She's two-months old, but I don't think she will notice I'm a bit late.  The quilt is 54" x 54".  My original plan was to appliqué a pink flower in the lower right-hand corner of the quilt, to add a bit of whimsy to the otherwise monochromatic quilt.  Please look at the pictures below and let me know your opinion.  The flower is going to be simplified if I do it, to have fewer but larger petals and larger bases, so they are…

a simple request for prayers. i know there are quilters here with a direct line. please remember me in your prayers.

My DH decided I needed to get the creative juices flowing so he brought in my easel from the garage and we went shopping for paints, new brushes and canvas. Right now I'm dabbling in acrylics and currently have a partial painting in the works. Letting it dry while I figure where to go with it. While I'm not thrilled with how it looks at the moment, I am pleased that I am at least painting and sketching. I can see that I've got to do something on the shadowing as I've gotten it much too dark,…

I thought I would try and send a note out to let you know I fell and broke the Radius bone in my right hand.

As a result of this, I'm half way through the moving process.  In a mess at both places.  I'm suppose to be all healed in six weeks (Sept. 15th).  Can't wait for that time to arrive. Home health is coming in and helping me with Bud,  I'm so bored, not being able to do much.  I have  mastered, making and  changing the bedding. Folding laundry,and doing dishes with my left…