High Fiber—A Little of Everything

A visit to Davidene's Quilt Shop brought me face to face with this cute quilt. 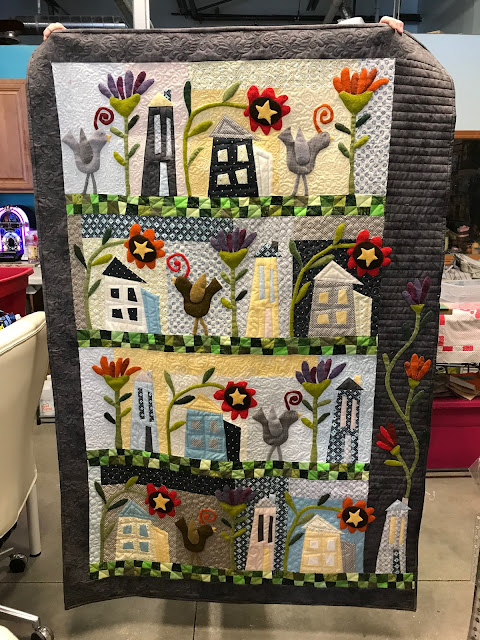 It's Called "Sunny Side of the Street" and is by One Sister Designs. I was just back from Vintage Stitchers at Rebecca's on Thursday, where Janet had mentioned that she planned on making this quilt, which is available at Davidene's as a kit. Davidene is branching out into online selling. Currently her moose blocks are available in her online store, but she says if anyone needs anything, and she has it, she would be happy to send it out, if you just call or email (see link above).

I brought a couple of boxes of books to Rebecca's so my quilting friends who didn't make it to my house two weeks ago could go through them and see if they wanted any. DH had some business in Salt Lake City, so he dropped me off and picked me up, along with the books that were left. Rebecca gave me some books to drop off at Davidene's when I took mine. Davidene is always working on some charity project, and she will find a use for them.

We had a nice meeting at Rebecca's. Good company, good eats and inspiration are always a good combination.

Janet was working on this project from Buttermilk Basin: The patterns are free, and there is a new one each month. For the next one, she is trying to use tissue paper to guide her embroidery. 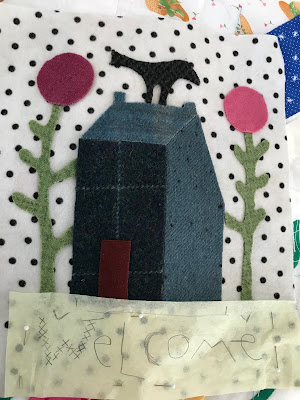 Barbara had just finished this quilt top. She gave me permission to post it in my blog, but not openly on Facebook, because it's a surprise for someone. I think it's amazing, and this photo doesn't do it justice. 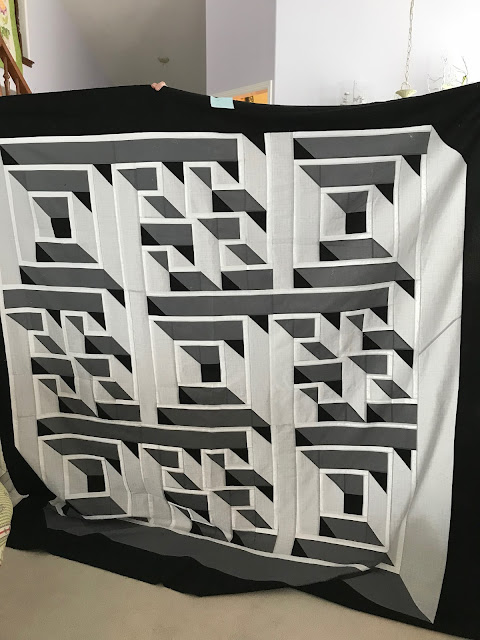 Every time we meet at Rebecca's, she has something new on display, usually a finished quilt. You may remember seeing this bunny quilt before quilting in a post of mine from June, 2016. The designer is Laura Heine. 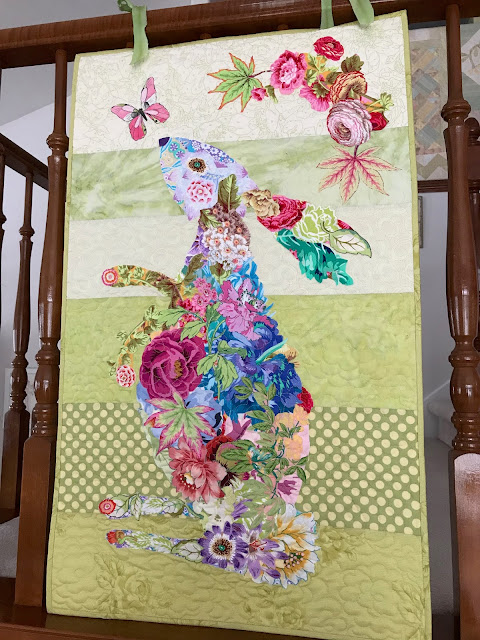 The quilting doesn't exactly show up in the quilt, but the quilter made the bunny look very plump and cuddly.

Rebecca had been reorganizing her sewing room. I had to go have a look, so I could get ideas for after we move and I have to give up my huge fiber studio. Here is the sewing/cutting area: 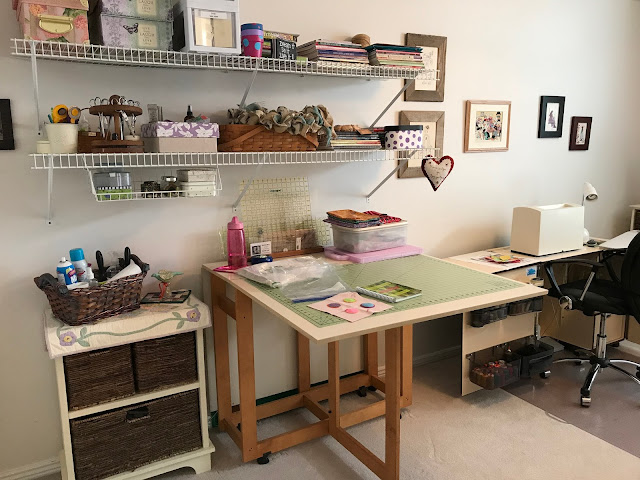 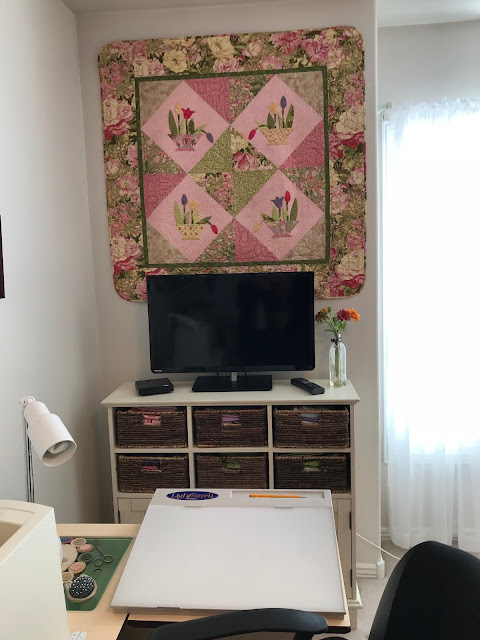 More storage is in the closet, but she wouldn't let me show it with the doors open. She has more wire shelves and a small area for hanging clothes. 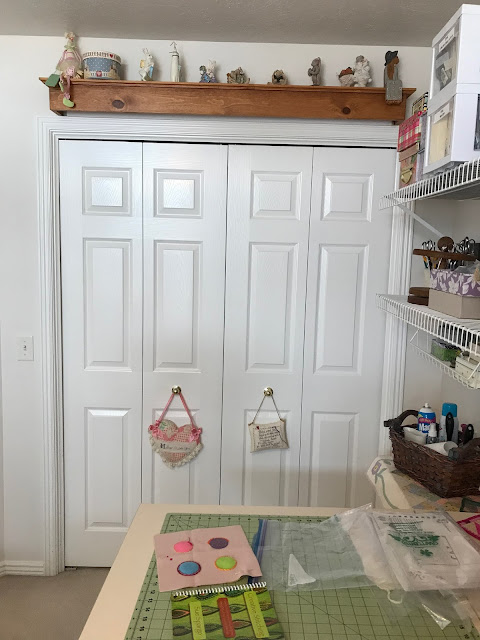 The sewing room isn't her guest room, but she can use it for guest overflow. 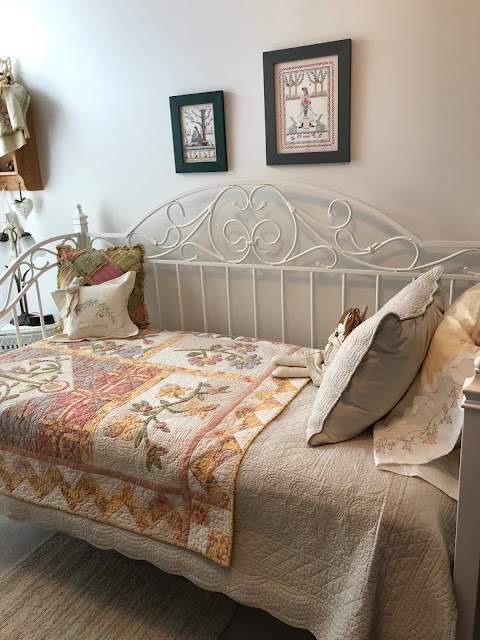 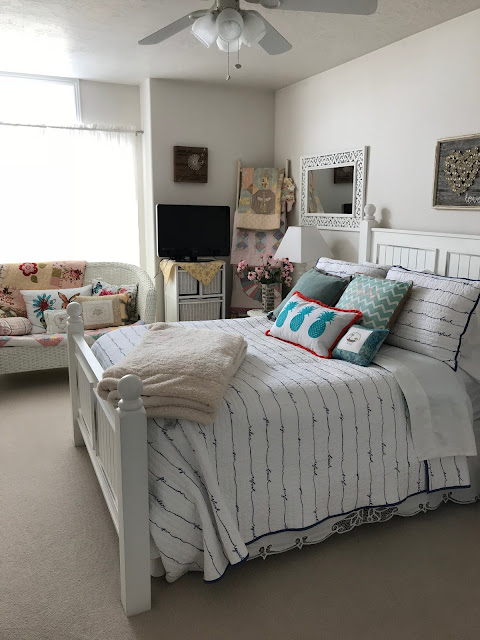 Every room has quilts on display. This was in the guest room. 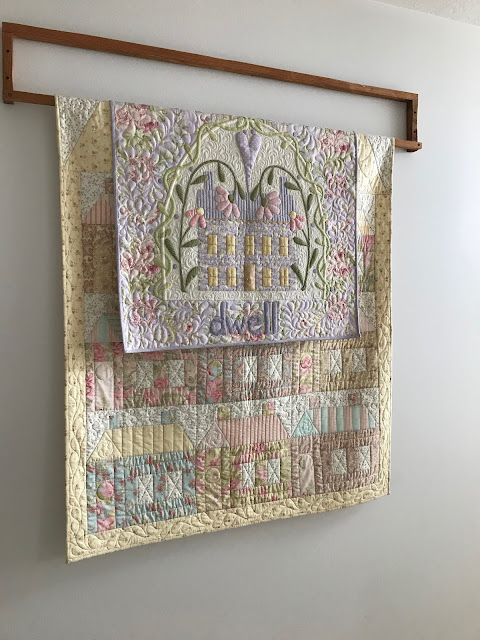 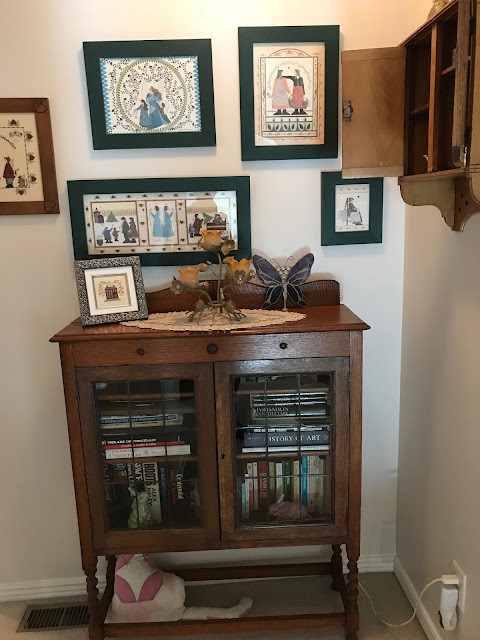 I was hand-quilting my Susan Branch Spring Flowers quilt, which you have seen. Making some progress. However, DH has been after me to take down the loom (as mentioned last week), so I spent some time this past week finishing the weaving to use up the warp that was on the loom. I made this bureau scarf. I may trim the fringe a bit. I need to try it on the dresser first to see how it looks. 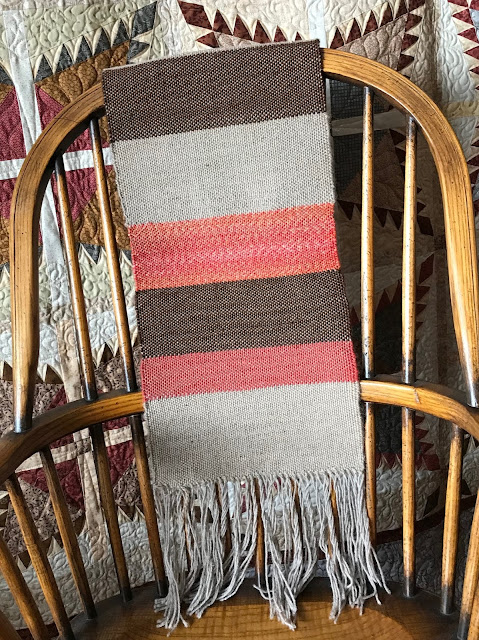 It took most of the day Friday to take the loom apart into pieces small enough to move easily. The castle (main body) is still very heavy, so it will be one of the things we get help moving. Here it is, all dismantled and sitting against the wall. 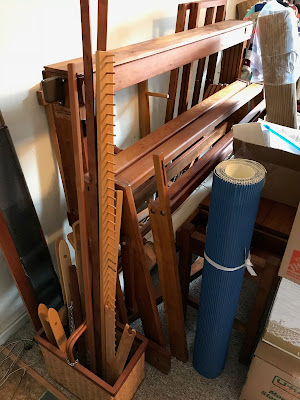 As we took things apart--a two-"man" job--I took photos of the individual parts and made notes about the photos and what goes where. 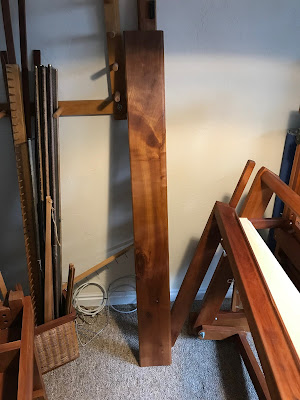 Then I used the photos and my notes to write up what we will have to do to put it together on the other end. I ended up with a little document printed off to take with us when we move, but I also have the document saved in the cloud, in case we lose it.

I've been participating in the Ravellinic Games in the Frog Prince group on Ravelry. One of my "events" was to make little hats for the dolls that "live" with me. Vroni got the first one. The pattern is Deb Denair's Lace Newsboy Cap, but without the bill. 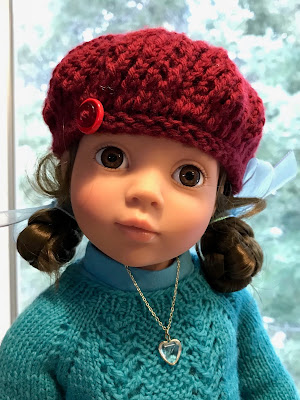 The next hat was for Mandy. This one was Deb's Shontae Slouchy, which I had reworked to knit in the round. 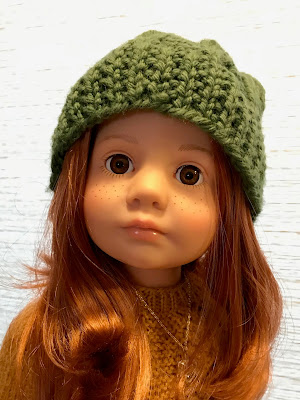 Then I made another for Lotte so I could test my pattern. I made both with worsted-weight, rather than the DK suggested in the pattern, but it worked out OK. Mandy thinks she looks like a snowboarder in her cap, and Lotte wants to be a ski jumper, although both would need helmets for either of these sports. These are for watching the others perform. 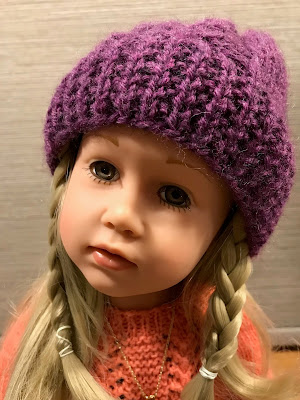 I had some loyalty points with My Doll Best Friend, so I used them (and some additional money) to buy some boots, slippers, shoes and underwear actually made for these dolls, who have longer, slimmer feet and smaller hips than most dolls in their size range. I also bought some tights and a windbreaker that came with boots that I really wanted. We will be ready for rain when it comes. I just need to make some little raincoats and hats.

I made a little book out of the photos from Vroni's birthday, using the Apple Photo app, which has the option of making cards, calendars and books, similar to what Shutterfly does. There was no discount for multiple copies, so I ordered just one to see. It came on Thursday. It basically tells the story from the special blog post I made on her birthday, February 2nd. 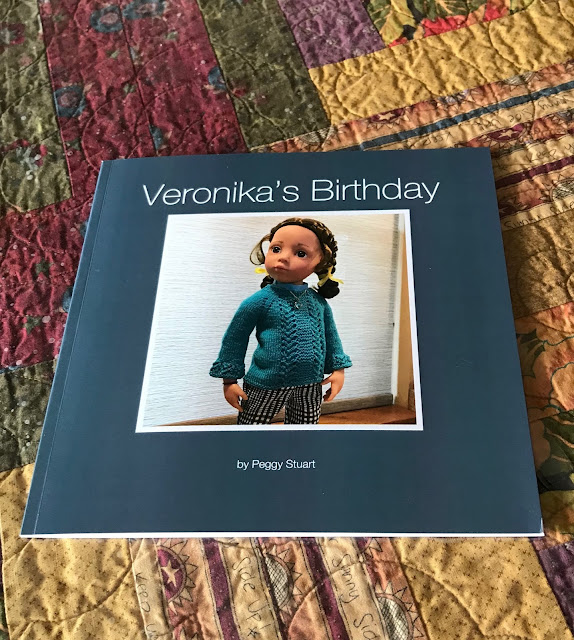 I did change a few things to make it suitable for reading to children who don't know the characters and to get the type to fit in the text boxes provided in the program. Now I plan to send a copy to each grandchild and give a copy to Therapy Animals of Utah for their next silent auction.

I'm researching how to get a book published, so I can make another doll storybook as a fundraiser, hopefully for pediatric cancer.

I'm still going through things in my fiber studio sewing area, trying to figure out what to get rid of and what to keep. My new sewing room will be much smaller than the current one, but at least the loom will be housed elsewhere. Right now, we're thinking of a living-dining combination, with the dining area used for weaving.

What's on my needles: Nothing new, but some UFOs.

What's on my Featherweight: Doll clothes, when I get back to sewing.

What's on my loom: Empty, and put away until after we move.

What's on my wheel: Stanzi is still awaiting her next task. Good thing she's patient.

What's on my iPad/iPhone: Finished Listening to Henrietta: The Daring Debutantes Series Book 1,  by M. C. Beaton. Then listened to Envious Casca: Inspector Hemingway Book 1 by Georgette Heber, always a great author. Then started The Scandalous Sisterhood of Prickwillow Place by Julie Berry. On my Kindle app is still Miss Braithwait’s Secret by G. G. Vandagriff. Seems like a good story so far.

What's my tip of the week: Throw all junk mail and miscellaneous paper advertising into recycling as soon as you receive it. Look at it if you like, but don't put it aside to look at later. Papers have a way of piling up and taking over your living space. If you don't get rid of it, your children will have to. I know whereof I speak.

LOL! Our dogs are trained not to shed. We can’t keep them from going after voles, though.

Thanks, Peggy. I will wait until the dog fur gets a little thicker. I actually went out and shoveled snow instead. One dog walked out of the yard on a drift while the other one was digging down hoping to find a vole.

Barbara, go play with your fabric until the urge passes.

Your "girls" are getting so grown up. Hats, boots, a book, when do they make a movie? Your friend's home is so clean and organized so beautifully that it put me into a funk. Maybe I should vacuum.

Thanks, Irene. I mostly do it for myself, so I feel as if I've accomplished something during the week. Otherwise, I just wonder where the time went.

Peggy your blog is always so interesting to look at. I'm amazed with the quilts. You girls are all so talented. Also, I enjoyed looking at the picture of you dolls.

Good idea! I have backup in the Cloud, but what if my computer isn’t handy? It might be difficult to print, if the printer is in a box somewhere.

You are so neatly organized, Peggy!  Your big move should go easily.  My only suggestion is to make a third hard copy of the set up instructions for the big loom, put it in an envelope and carefully tape it on the underside of a large, flat piece.   You never know what is going to happen in a move!

I will definitely do that Peggy.