First of all, there's the progress on the Brioche Shawl Feathers shawl. 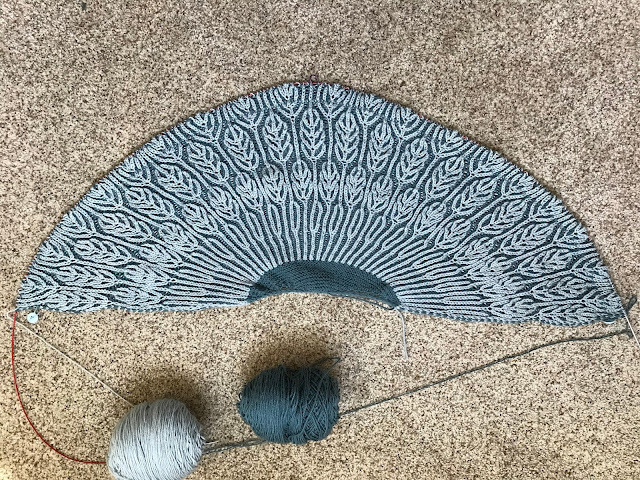 The Brioche stitch is getting easy, although I sometimes need to review how to do some of the decreases. They only occur every few rows, so it isn't as if I can remember. At least I don't have to rerun the YouTube video each time anymore, however. Details of my project are here.

Here's Pippa, modeling the coat for Daphne's Lotta, who isn't allowed out of her box, but they are identical in size, so Pippa will do fine. Lotta has a blue dress that will go with this. 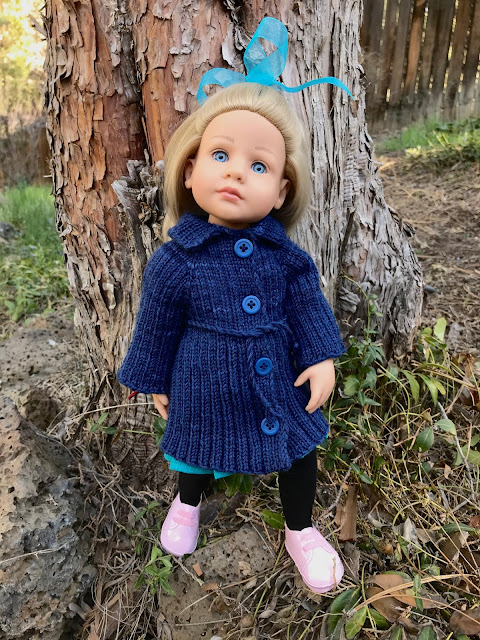 I used thinner yarn and smaller needles with a gauge of 41 sts/ 4" or 10cm over k2, p1 rib with the smaller needles (2.5mm), not stretched. Details on the project are here. Our daffodils are coming up, and Pippa discovered one in the back yard while we did the photo shoot. 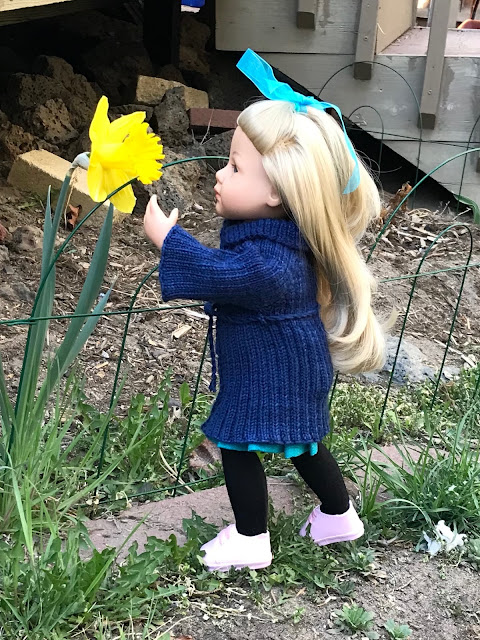 Rocky's light blue fleece jacket is in the laundry, so I made him a new one, this time in red.
Just in time for it to warm up here. 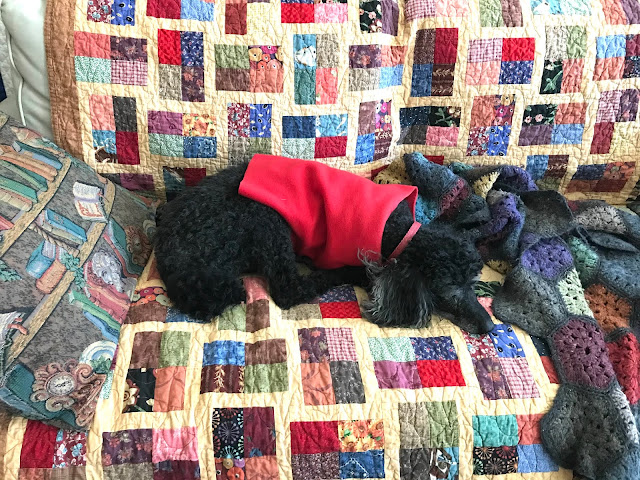 I spent some time tidying up my workroom. I still have more to do, and I want to get the loom put together. When everything is off the floor, I'll bring Beatrice (my Eufy robot vacuum) in here and turn her loose. I should have taken a "before" photo. 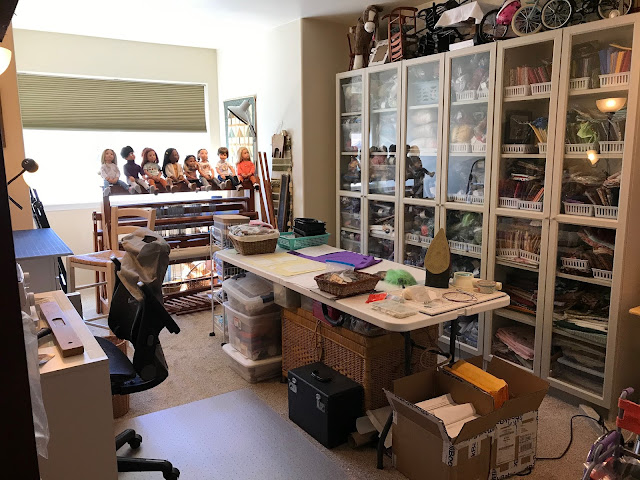 DH has been meeting with a group of Madroña Vineyards fans. I was able to join him on Thursday. Everyone received the same wines (see below) and we had a virtual wine-tasting. (The wine was real, but the meeting was via Zoom.) We tried the 2002 and the 2017 Nebbiolo. The 2002 was fantastic. We should perhaps get some more of the 2017 and store it in the wine fridge, although it's risky (a power outage or fridge failure could damage the result)...and there's no room in the wine fridge. 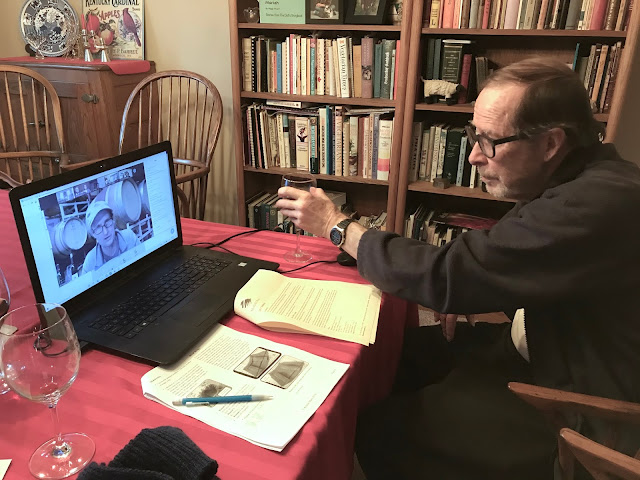 We discovered Madroña Vineyards when we lived in Utah and were active in the Park City Mountain Sports Club. Friends talked of it, so we stopped there when we were in California.
My kit for the Kevät sweater arrived in the mailbox Thursday, but it was very late when the mail was delivered, so I picked it up on Friday. 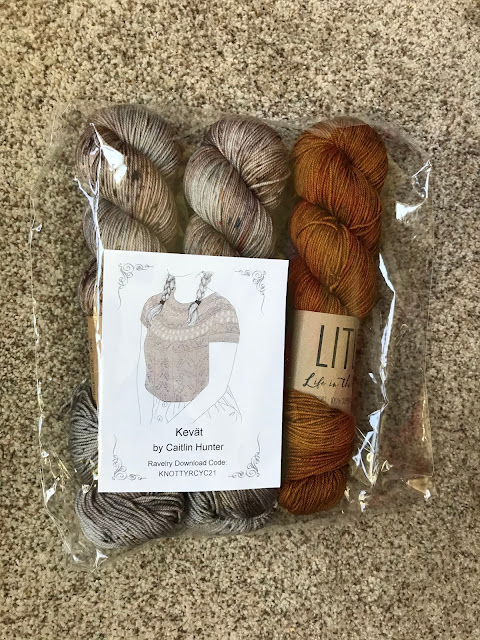 DDIL and I will be doing these as a KAL. I have the cropped version and she is making the full-length one. The pattern is here.
I found out this past week that I will be getting monthly reports from Book Baby on sales of the book. Each month's report will be for the month three months before, so the first report I received was for December. The report in May will be for January, etc.
I hope to get a bit more quilting done this week, but I need to finish outfitting Lotta, so I can mail her off the beginning of May.

What's on my needles:  Finished the winter coat for Lotta. Still working on the Brioche Shawl Feathers Shawl. I replaced two buttons on my Dogwood Blossoms Cardigan.
What's on my sewing machine: PJs for Lotta, all ready to cut out, and then some leggings for her. Rocky's indoor fleece jacket, done, and some buttons sewn on Pippa's overalls.
What's in my hoop: Still the Whole Cloth Quilt. I got to move the hoop again.

What's in The Doll's Storybook: "A Science Experiment, Part 2."

What's on my iPad/iPhone: Finished The Unexpected Mrs. Pollifax by Dorothy Gilman, and now listening to The Other Emily, Dean Koontz' new novel.
What's in my wine glass: Madroña Vinyard's Nebbiola 2002. Delicious. It changes character with each food, and always delightful. A new favorite.
What's my tip of the week: You know those cans where you have a pull tab instead of using a can opener? They leave a rim around the top that makes it difficult to get all of the contents out. I have just discovered that you can actually use the can opener to remove that rim cleanly if you want. I don't know if this works on all cans, but it worked great on a coffee can and then some canned pumpkin.
Where's my book: Mariah: Stories from the Doll's Storybook is available from Amazon worldwide. Also available from BookBaby, Barnes & Noble and other booksellers. Royalties go to support pediatric cancer research and treatment. The three stories in the book first appeared in the blog and they are reproduced with few changes. The stories (and links to them) are Being Little, Besties, and Distraction.
Note: This blog post was produced on the iPad and the MacBook, using the iPhone for some photos and some photo processing. No other computer was used in any stage of composition or posting, and no Windows were opened, waited for, cleaned or broken. No animals or dolls were harmed during the production of this blog post.

Thanks, Carol Ann! You can always find me at zwergpudelfrau.blogspot.com. They are ending their notifications soon, however. I think I’m going to have to have it go to Bloglovin, like my story blog. They still send out notifications.

That is really going to be one beautiful shawl, Peggy.  I admire your patience with such a complicated knit.  Since Connecting Threads is shutting down this site on May 15; I guess I will find you on your blog after that.  You live reasonably close there in Bend, OR, and I don't want to lose you High Fibre column, which I enjoy reading every week.