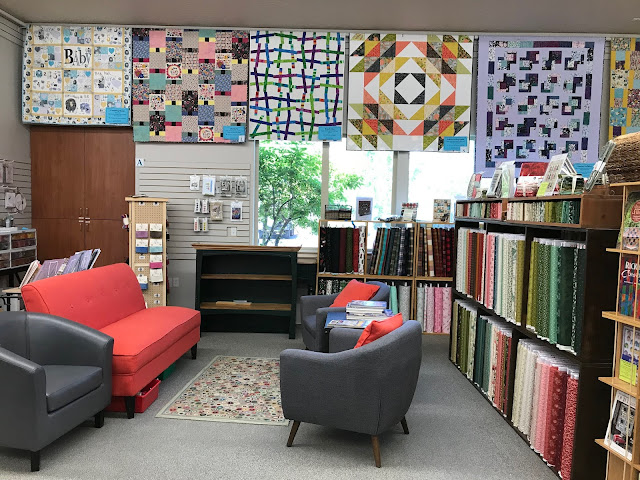 I ended up there almost by accident, as I'll explain later.

I was very impressed with the shop. They have a cozy spot where people can sit. 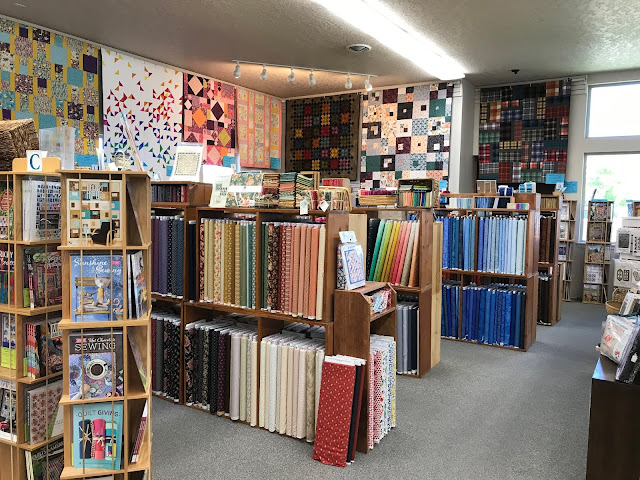 The supply of fabrics, books, thread and notions was impressive. 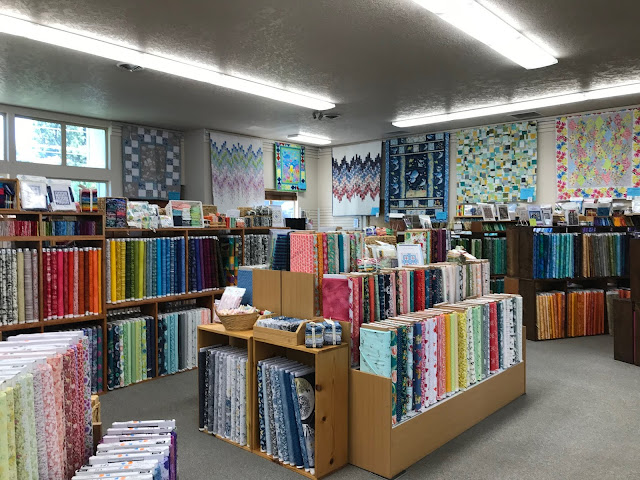 There was a lot of inspiration as well. 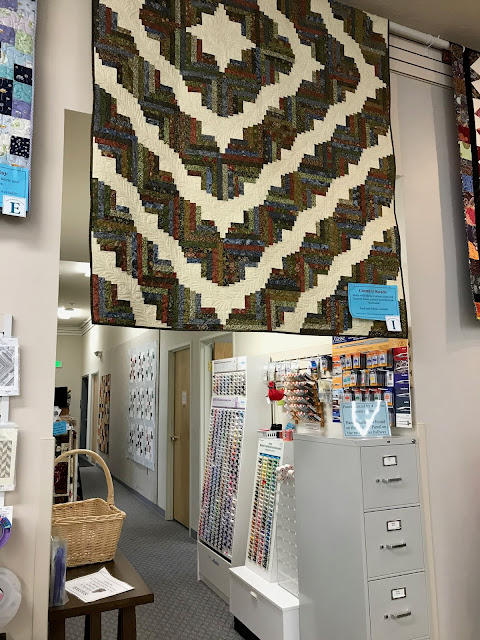 This was only part of the batik section. It was huge. 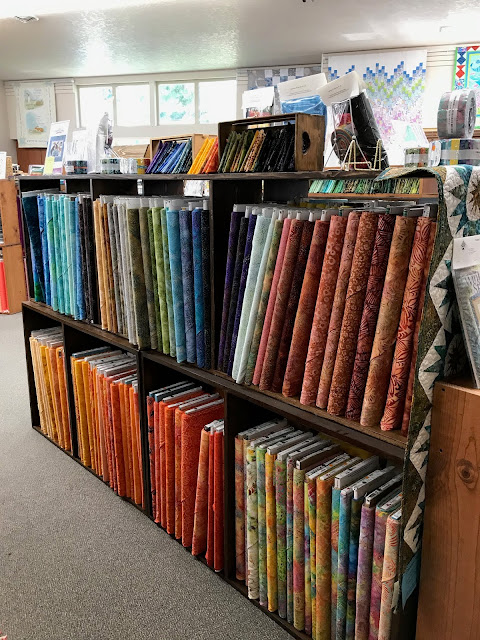 I'm guessing they have someone who can machine-quilt for you. I will have to find out. 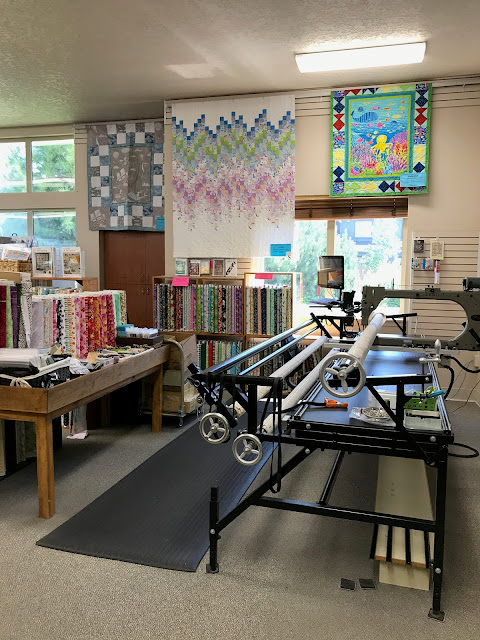 The mascot of Bend is a dog. BJ's has a bunch of small stuffed toy dogs with name tags. When you put a bolt on the counter to be cut, but you aren't done looking, you put one of these dogs on your bolt.

The way it came about that I was there was this: I have been developing some T-shirt designs for my characters and needed a someone with an ink-jet printer to print the transfers for me. We have an ink-jet printer that hasn't been used in years because we did so little color printing, and the cartridges dry out if you don't use it often, so it needs cleaning and new cartridges. After calling all the print shops only to learn they just had laser printers, I started on the quilt shops in town. (There are three.) Davidene used to print my quilt labels for me at her shop in Park City, so I thought they might have an ink-jet printer. I struck out with the first two I called, but the third was BJ's. It turns out they also print quilt labels for customers and, once they learned that all they had to do was print on the transfer sheet, they were happy to do it. That got me into the shop, and I know I'll be back. I bought some fabric that caught my eye and got their permission to take the photos. Here's my fabric. 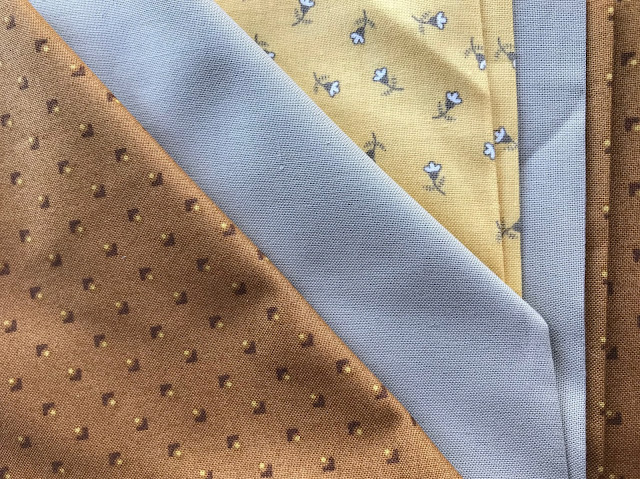 I plan to use some of each for costumes for my characters, but I got enough to put in my stash for future quilts. BJ's sells online as well as in their brick-and-mortar store.

Here's Billy wearing the first of my T-shirt transfers. I found some images online that are royalty-free. Eventually all my cast members will have at least one shirt that reflects their special talents or interests. 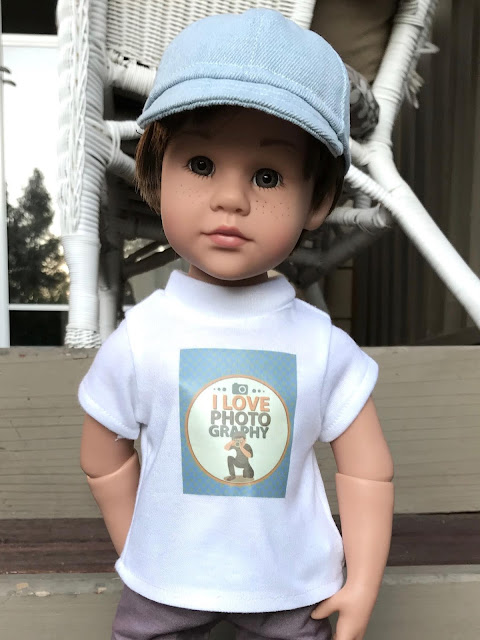 We went to the DMV on Wednesday to get a new license plate for the trailer and my Oregon driver's license. (DH took his test last week.) We knew we would be waiting awhile, so I took some knitting––a dish cloth I hadn't yet cast on. Three-and-a-half hours later, we left with the new plate and this: 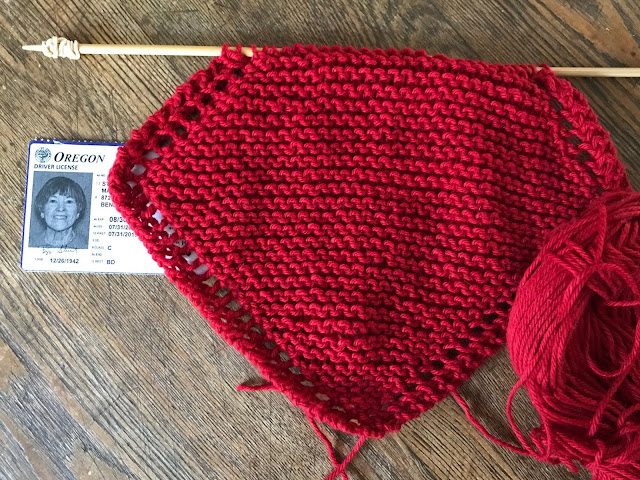 It was actually a lot of fun, with people sitting around, chatting. I'm sure some people were stressed about being there so long, but everyone was pleasant, and the staff was really nice to work with. I didn't even get hassled by DMV over the Peggy-Margaret thing, and I've been wanting enough cotton dish cloths that I can use a fresh one each day. It didn't take long to finish that one up after I got home.

Thursday morning, we participated in a small-dog hike at Shelvin Park. It's only three miles out of town, but it's a nature reserve with hiking trails, a picnic area, rest rooms and a year-round stream. The dogs have to be on a leash, but it's still nice for them to be out in nature. There was only one other participant, a lady named Kathy and Finn, her mini Golden-doodle. We had a nice time and got in a 4-mile hike early in the day before it got hot. In anticipation of this hike, we got licenses for the pups on Tuesday, as they are required in the park. Not that there was anyone there to check for them.

Thursday evening we (DH, DBIL and I) went to Sisters for a free concert in the Fir Street Park. We took some beer and sandwiches, and sat on the lawn. The group that played was Town Mountain. They play Blue Grass and Blues music. They were excellent. Some children climbed a fir tree close to us or played on the grass, and some people got up and danced. 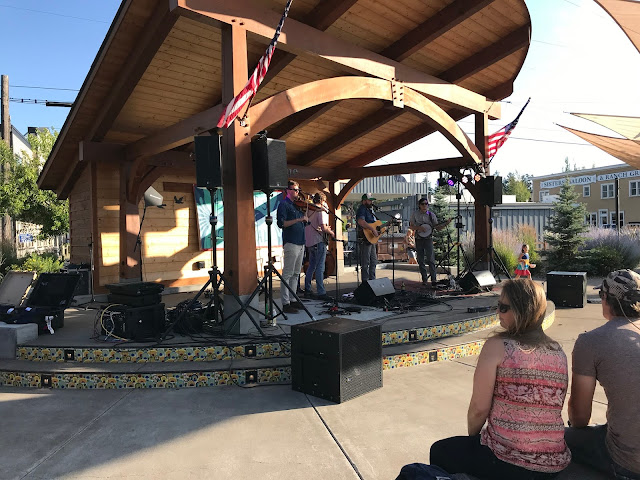 Friday evening we went into downtown Bend for the First Friday Art Walk, which takes place on the first Friday of each month. It wasn't just art. Most of the shops were open and had something to offer. Some of the shops had music. 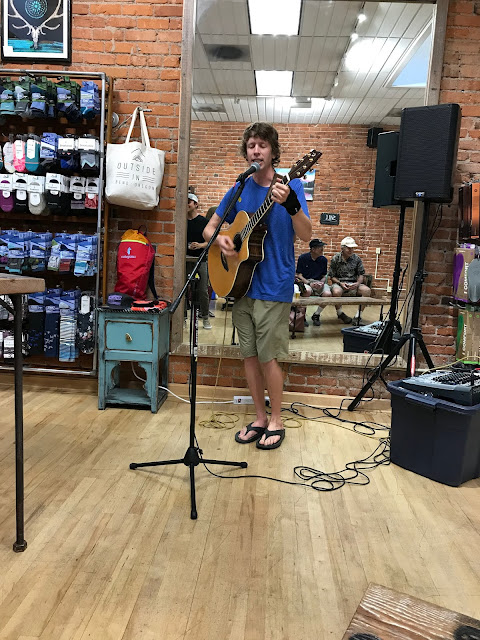 Most of the open shops had beer (a Bend specialty, as I've been told we have more independent brewers per capita than any other city in the nation) or wine, or something to nibble on, and some places even had cocktails. It's a good way to become acquainted with the local stores. 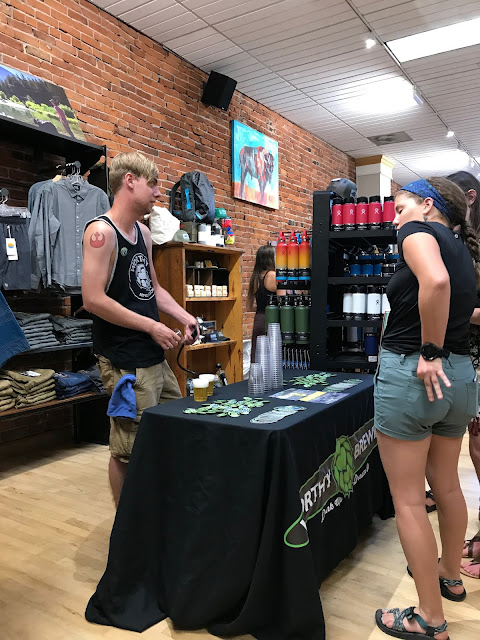 There was some street entertainment, like these fairies making huge bubbles, which the children who were present really seemed to enjoy. 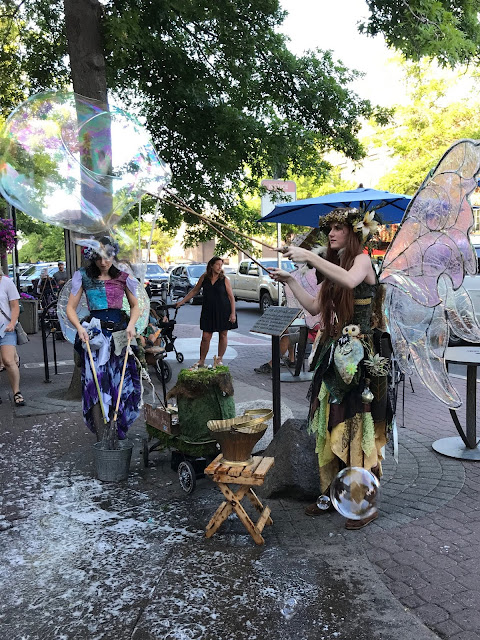 In this week's story in The Doll's Storybook, the dolls make ice cream. We actually made frozen yoghurt using a very simple recipe, and we have been enjoying it ever since with our DDIL's rhubarb compote. Yum! 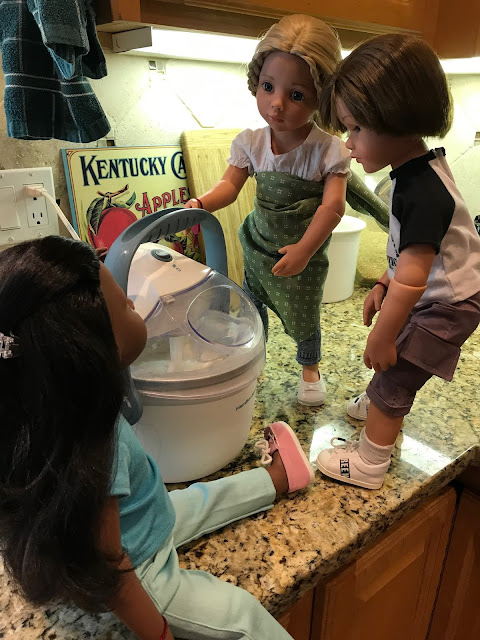 The Missing Link is now out on DVD and Blu-Ray. The Wisconsin grands found Uncle Peter's name in the credits. 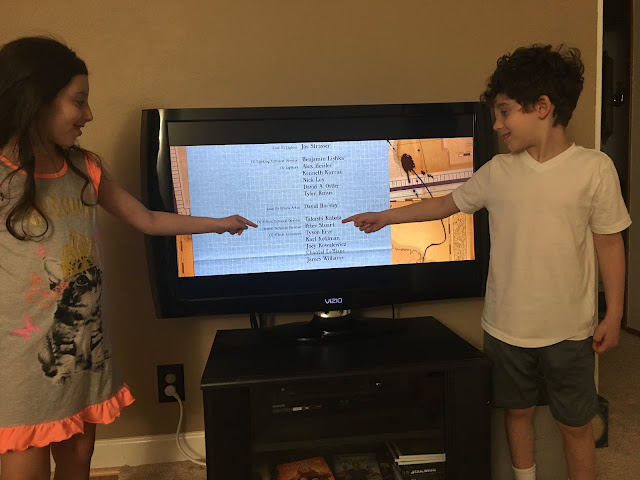 What's on my needles: Still the Trickle Brick Socks. I'm at the heel turn. Not much progress this week, as I've been working on dish cloths.

What's on my sewing machine: More clothing for the cast of the stories.

What's on my iPad/iPhone: Still From This Moment by Elizabeth Camden. Not much time to listen this week. 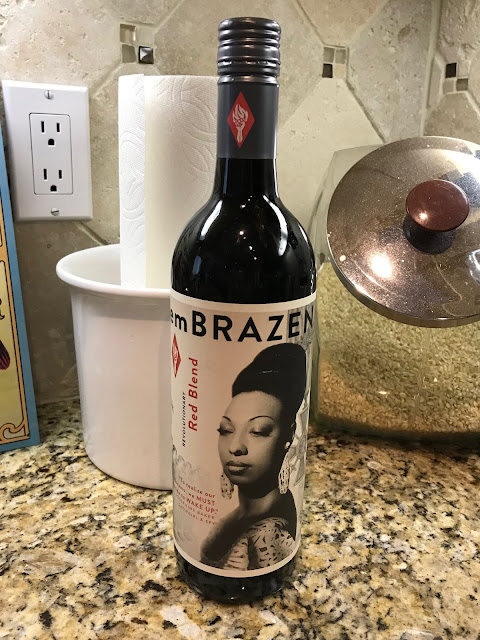 What's my tip of the week: Don't throw away or recycle those plastic jar lids. They make handy saucers for plants or to put under bottles of things that might drip and make a mess or damage the surface they're on, like plants, a wine bottle, salad dressing or oil. They can be washed in the dishwasher. This one was the lid to a jar of roasted nuts from Costco. 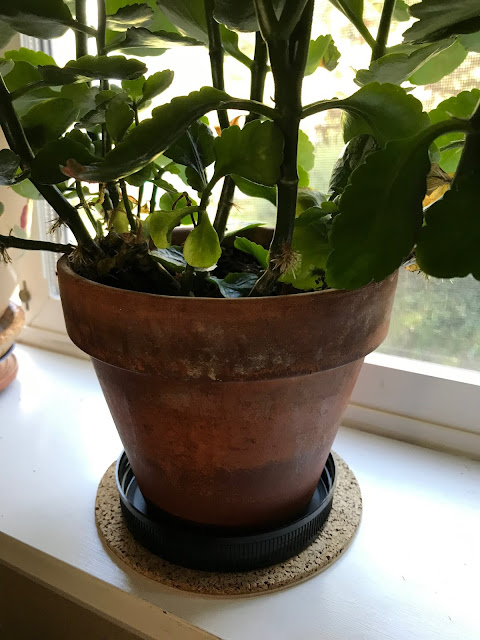 Irene, it was a feast for the eyes.

Wow, you have been busy. I loved all the fabrics displayed in the quilt shop. Very good blog.

It looks like they're still there. Your DH is a biologist? Mine is a geologist, also retired.

Yes!  Material Girl Fabrics was the one I was thinking of!  I bought a great kit designed for a fisherman (DH is a retired fisheries biologist) there!  Now where did I put that?

Rebecca, you're so right! I was salivating for the batiks!

Carol Ann, holy cow! I looked for a quilt shop in Redmond, which is close, you're right, and there were three! Material Girl Fabrics, Fabric and What Knot and High Mountain Fabric.

I was sad to see that Davidene's in Park City has closed permanently. Davidene was such a nice lady and so helpful to everyone. That was the only quilt shop in Park City. Of course, we had plenty in Salt Lake, but it meant braving the canyon and a fairly long drive at that, just to the edge of the city.

Kathleen, it's funny about Bend and beer. You're welcome for the tip. I've been using it here quite a bit. One day I wondered where all my saucers had gone, and I had a lid in my hand that couldn't even be recycled. I really hated to throw it away, and then it hit me.

That looks like a great quilt shop! Love the displays too. Interesting fact about Bend and beer. And thanks for the jar lid tip.

Yes, you have been busy!  I also remember another quilt shop north of Bend in Redmond(?) maybe.  It was a much more casual, on-the-highway shop, and may well be closed now.  Bend has grown so much since I was last spending time there; I'm not surprised that the traffic is getting congested!  This seems to be a hard economic time for quilt shops in general; the only one in my town just closed.  I'm happy to see BJ's is still there and thriving!

Great blog post Peggy.  It seems that your move to Bend was really worthwhile - lots of new things to see and do.  And a wonderful quilt shop (with a long-arm service I'm sure). So many batiks, so little time....

Carol Ann, my life has been busy, and I have lots of stash, but I had planned to get to each of the quilt shops in town sometime soon. I've been to Sew Many Quilts, which is actually closer to my home, but the traffic is so bad in that area that I haven't been back. The other one is on a very busy street, but I've heard that they are closing down.

I'm surprised you hadn't discovered BJ's in Bend before now, Peggy!  I believe I have been there at least 3 or 4 times in the last several years, especially when I went though Bend and up to the Sister's Outdoor Quilt Show.  Once I was on a bus trip to the show and even the busses stopped there!  It is an amazing shop all right!  I have always meant to go back "off season" when it isn't so crowded.  Great photos!