This week I'm showing off a lot of things that got raked in over the last couple of weeks. First Christmas: 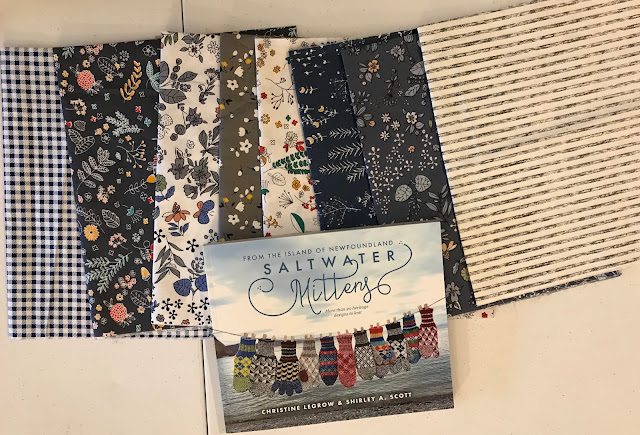 My daughter and my younger granddaughter picked out the yummy set of fat quarters for me for Christmas, and Santa put this wonderful Mitten book in my stocking. I've already picked out the mittens I hope to make from the selection in the book, and I have several things in mind for the fabric.

This week we celebrated New Year's Eve by staying up until midnight and drinking an entire bottle (for two of us) of very expensive sparkling wine from Costco. 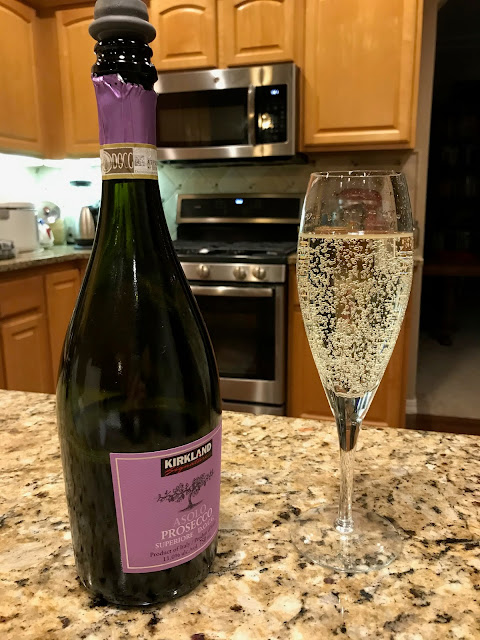 I already had the black-eyed peas soaking for our Hoppin' John recipe, traditional for New Year's Day. 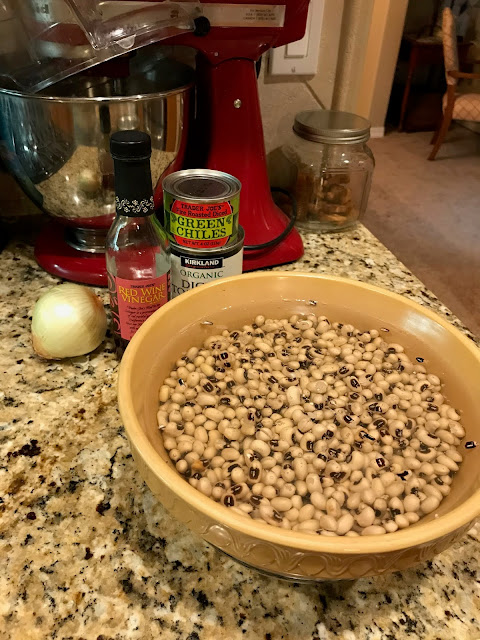 On New Year's Day, we watched the Rose Bowl Game, which was very exciting, because we could cheer for both teams: the Oregon Ducks and the Wisconsin Badgers. It was a great game, because the lead kept changing hands. We discovered that our younger dog, Dusty, is a Ducks fan. Every time we said "The Ducks are gonna score!" he ran around in circles and grabbed a toy to shake senseless. The Ducks raked in the win, which made Dusty very happy. We're gratified that Wisconsin did so well, too, though.

The Wisconsin grandkids raked in bicycles for their dolls after they got back from Texas. Here's Daphne's Hannah riding hers. Zachary's bicycle is in the background. This is a well-made bicycle sold at Target. I was able to order it online with free delivery to their local store. (Looks like Hannah has been doing gymnastics.) 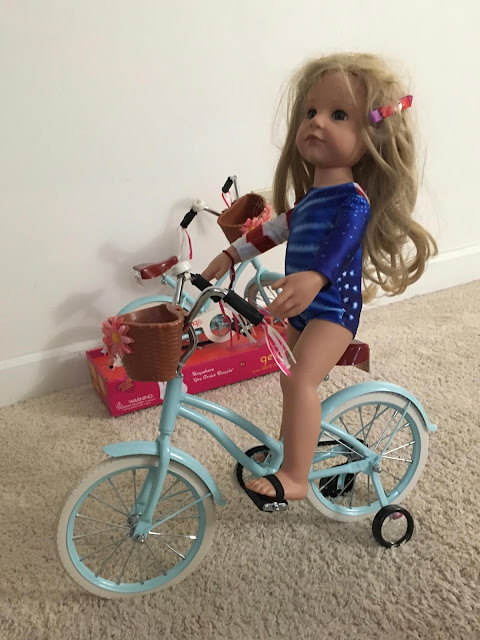 Saturday we went to a town hall held by one of our senators, Jeff Merkley. He took time for a photo op with me. (He's bigger in person!) 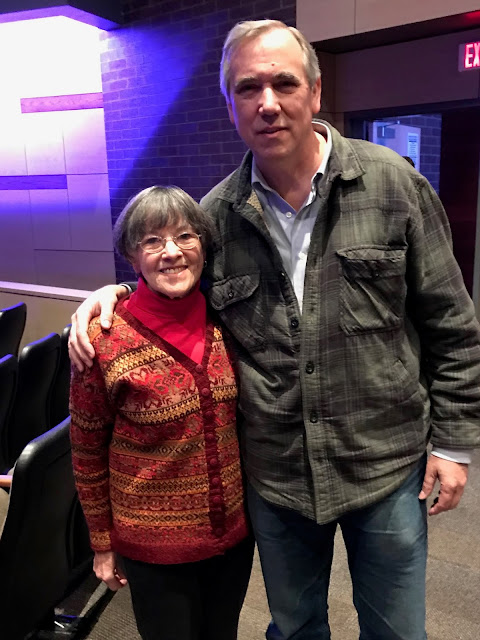 I found his answers to questions very thoughtful and easy to understand. I hear he has done more than 400 of these, so I guess he has it worked out. I'm glad he's one of my senators.

Sunday was the twelfth day of Christmas. We had our Christmas pageant. In this case it was the Christ Child who raked in the goodies: gold, frankincense and myrrh. Maybe not every child's dream present, but I doubt He was surprised by it. The applause for the children was enthusiastic. 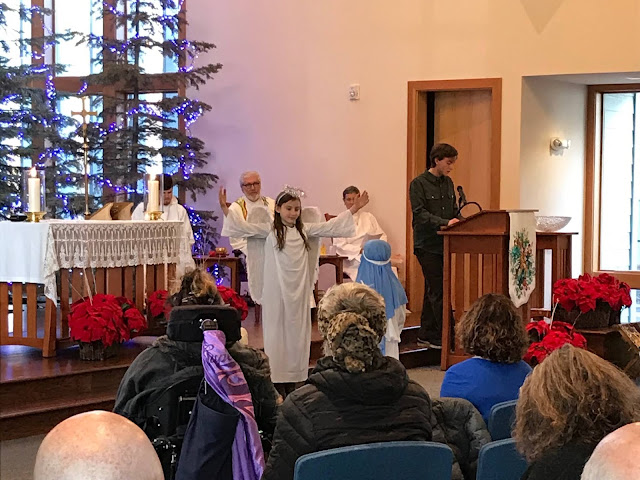 Members of the choir wore halos while we sang as the angel chorus. I took this selfie with one of my fellow sopranos and was amazed that the halos seemed so real in the photo. 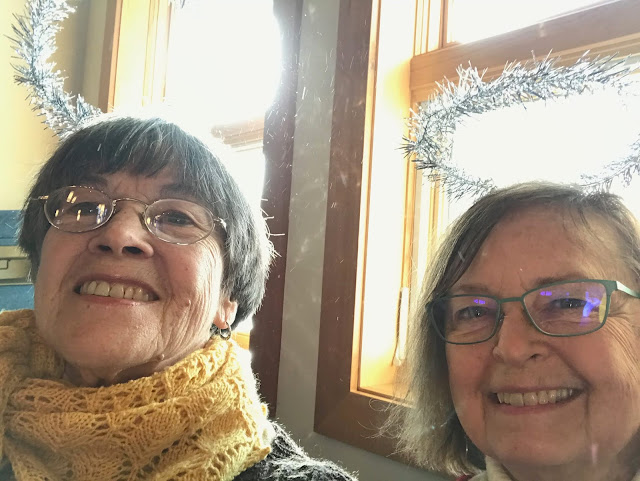 That's probably the closest I'll ever get to raking in a real halo.

Sunday evening we went to a benefit concert put on at my church for The Family Kitchen, a soup kitchen that provides meals for anyone who walks in the door, no questions asked. My church subsidizes the running of this organization by providing volunteers and the physical space, along with some money for running it, but needs help from outside to meet the needs. Two Oregon singing groups, True North Band and Down Range, generously donated their talents to raise money for feeding the hungry.

Down Range warmed up the crowd. I could have listened to them all evening. (These guys are about my age and survived the "Great Folk Music Scare" by learning to play...folk music.) 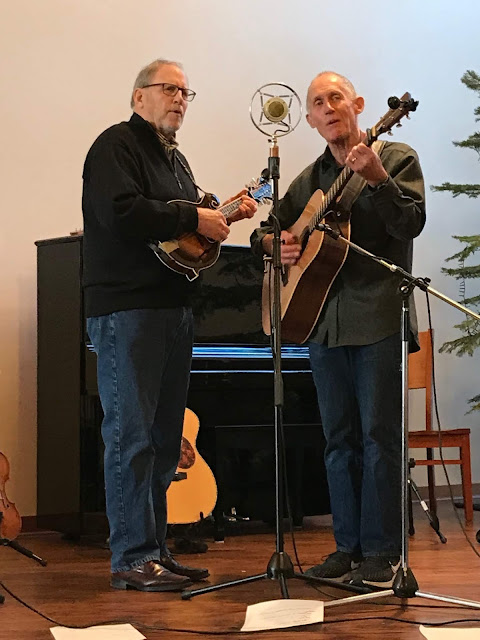 After a few numbers, True North Band came on. They perform blue-grass, folk and country numbers in their own style. 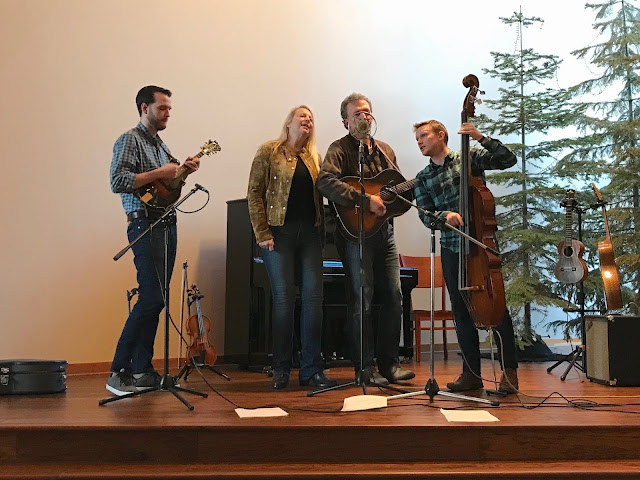 The lyrics were wonderful. They made us laugh; they made us cry. The music was lovely and beautifully performed. We bought CDs from both groups, which also went to Family Kitchen.

Mr. Link was shocked to learn that he had won. He wasn't even at the awards ceremony. 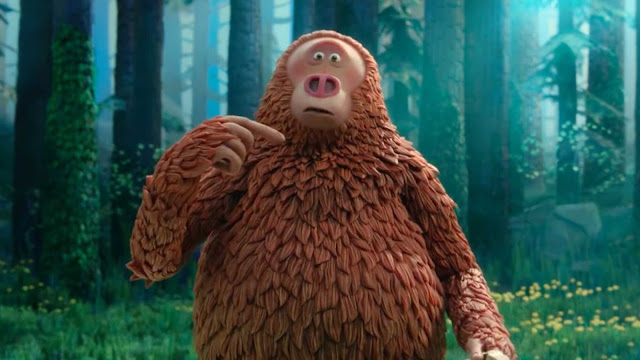 There were three Disney films nominated, and Pixar usually wins, so it must be a good film, not just because I think so. I suggest you get a copy or find a way to watch it. (Your purchase helps my family!) Here's the proof: 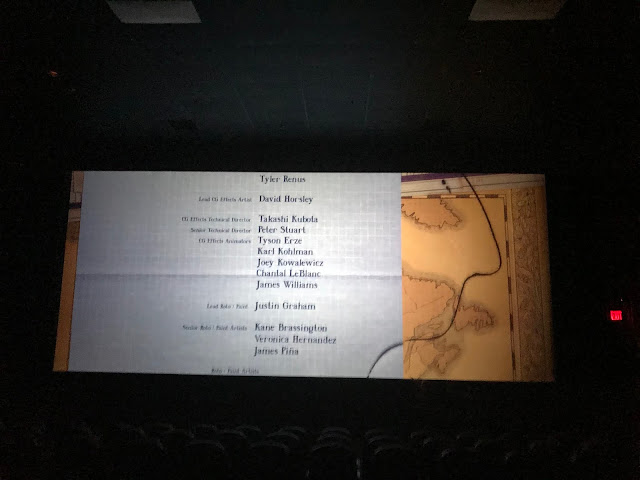 Then I received this in the mail from our interim choir director: 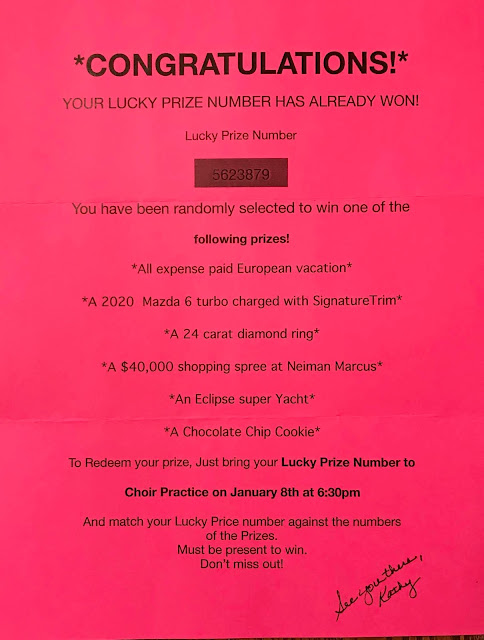 Lucky me! Clearly, she wants to be sure everyone comes to practice on Wednesday. What prize do you think I'll rake in? (I'm hoping for the chocolate chip cookie.) My life is already full.

What's on my needles: Maine Memories still. Making progress. I'm almost done with the two-color section of the pattern. It will continue in plain purple from there. 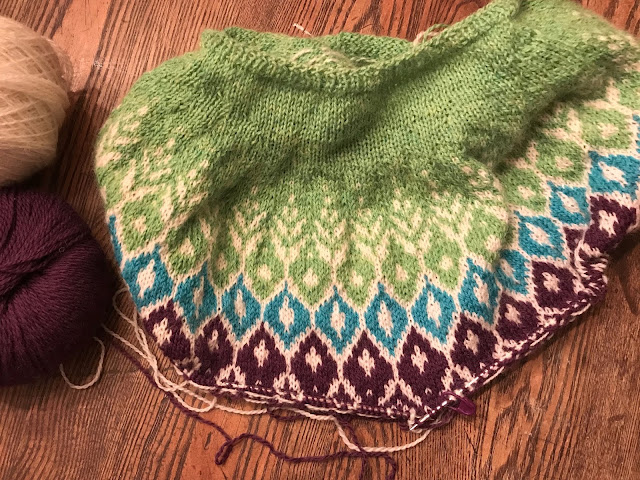 What's on my sewing machine: Getting ready to sew Victorian costumes for two lucky dolls for Valentine's Day.

What's in my hoop: Still the Whole Cloth Quilt. Another week with no progress. One of my New Year's resolutions, though, is to finish it THIS YEAR.

What's in The Doll's Storybook: Together. Emil wants to know what the other dolls did together before he arrived. This story is a review of some of the activities the dolls participated in during the past year. They enjoyed the fireplace app on my iPad while they reminisced. 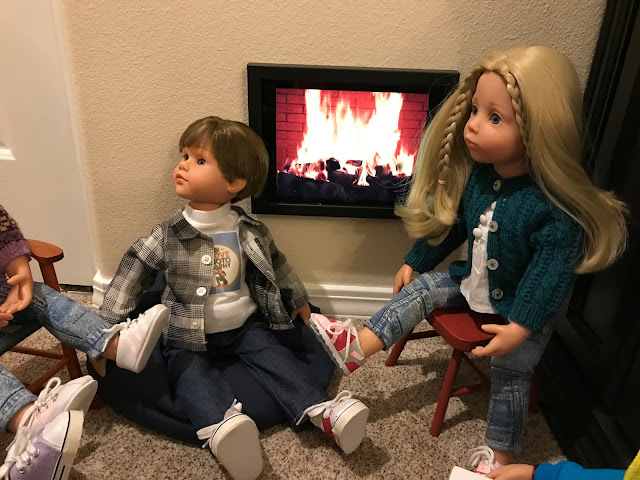 What's on my iPad/iPhone: Still Blowout by Rachel Maddow. It's a great story with lots of detail, but it has been a busy few weeks. I have used up most of the Audible credits I had accumulated by giving audiobooks as Christmas presents. Johan is listening to Ramona Quimby by Beverly Cleary and Tracy Dockray. (It was on his wish list, and much cheaper as a download.) The Wisconsin grands are listening with their parents to the Harry Potter books, although they have both read the first book as a physical book. They also have Into the Wild by Erin Hunter for the kids and Harry Potter and the History of Magic by Ben Davies for their parents, two literature professors. Our older son has a 3-month subscription to Audible, so he can pick out his own book and buy more if he wants. He commutes a long way to work, so audiobooks are a good way to pass the time.

What's my tip of the week: I'm getting a Roomba knockoff (a Christmas present). I will let you know how it works out.

Rebecca, the choir practice is tomorrow night. I'll let you know what I get!

I think everyone should volunteer to help make the change they hope to see. I think we also need to be kind to people who believe differently from us. It isn't easy, when we don't understand what they are thinking. I tell myself this every day, and it ends up in my stories, too.

I'm thinking that everyone got a chocolate chip cookie!  Very cute way to remind people about choir practice!

I have my fingers crossed that change is coming in November.

Sending you a message.

I was active here until the current resident of the White House moved in there.  I must confess that since then I have been so sickened by what goes on that I have kind of given up.  Claire McCaskill lost her seat to a man who was already under investigation for criminal activities and he was the Attorney General here at the time!  I firmly believe when young people see that going on, it doesn't encourage them to get out & vote either.  Both of my grandsons here in MO will be eligible to vote in Nov & they have both promised me they would definitely do that.

Janet, if you don’t like your current representation, you can work for change. Even if you don’t succeed, you can have an impact, and it’s therapeutic to go through the process. You can help register people to vote, for instance. Too many people put it off. We used to register people at the Farmer's Market all summer. Someone else used to go to the colleges, universities and high schools to register young people. Find out who is running against the people you don’t like and volunteer, even just sending out post cards or licking envelopes is a help.

The halos were a surprise.

I am so jealous.  Not only did you get to meet Jeff Merkley, but you got a hug from him.  He is wonderful & I wish everyone had a Senator like him.  Unfortunately here in Missouri we do not.  Our 2 are beyond worthless.  Love the halos too.