The loom is in business again. 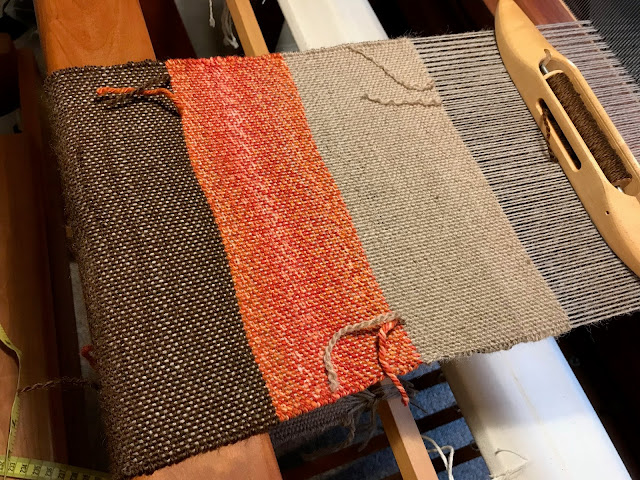 DH has been after me to fold up the loom so he has a place to store the boxes as he packs things. I still had about 60" of warp left on the loom and didn't want to waste it, so I'm making a bureau scarf out of it. It should serve double-duty as a rug for the dolls from time to time. I was hoping to get a start on making some rag rugs for our new home, but that will have to wait.

Common threads met at Margareth's house. Lynda and I drove through a blizzard to get there, but we didn't want Margareth to have wasted all her preparations, so we braved it, as well as the resort traffic, which was awful (powder day). Karan and Georgette also made it, although we were all late.

Margareth was working on this wool felt project. 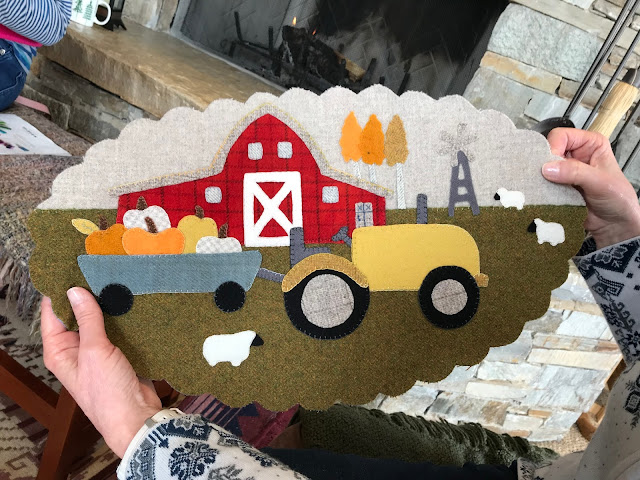 She had finished this advent calendar for her cabin, now under construction. 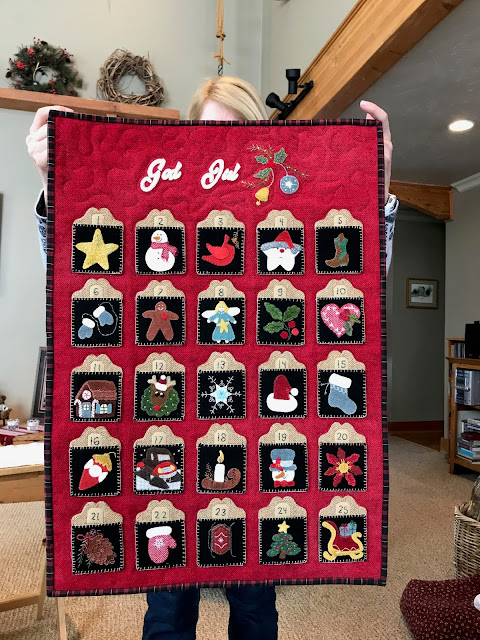 Georgette was working on the same needlepoint design she had last time we met, but she had picked up her santa picture from the framer. This one was for a family member. 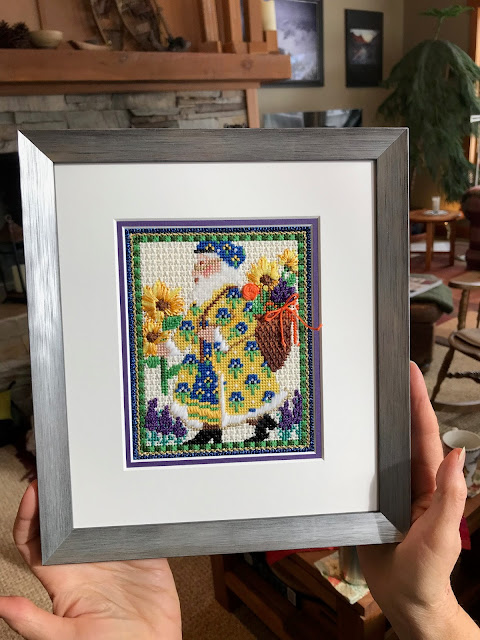 I took my Spring Flowers quilt to hand-quilt during the meeting. I'm making good progress.

I finished the last Steampunk Blouse, so we had to get a group photo. I have a more posed shot, but this one was cuter. 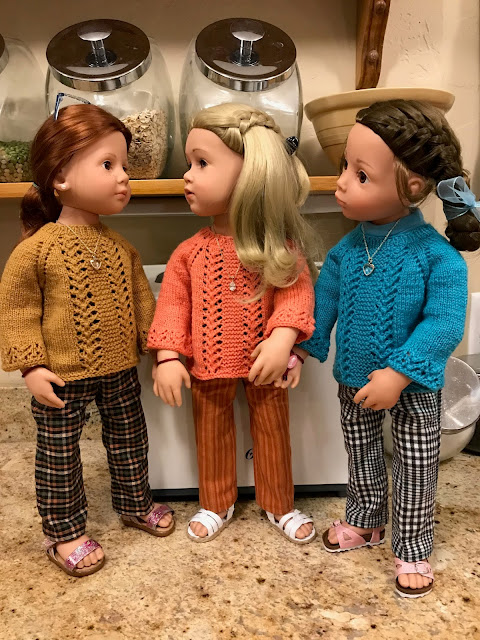 The girls had planned a special  event for Valentine's Day. They watched all six hours of the BBC version of Pride and Prejudice with Colin Firth and Jennifer Ehle. 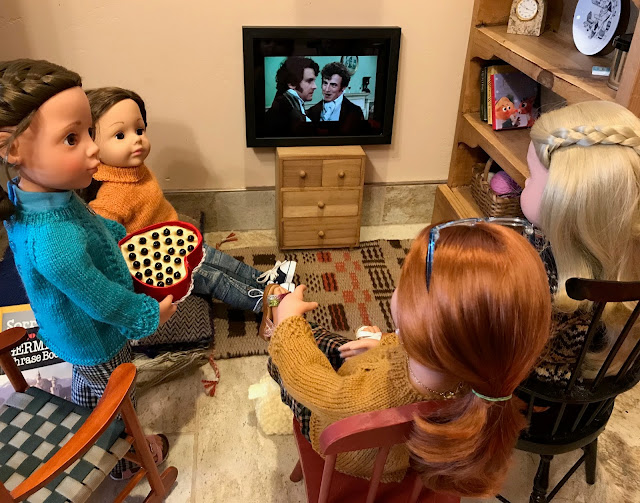 The boys said they would rather do homework. It was a pleasant day, and we could have called it "Galentine's Day," because it was just for the gals, as it turned out. (That's a new term I just learned.)

We didn't hear the sad news about the school shooting until after the last episode was over. 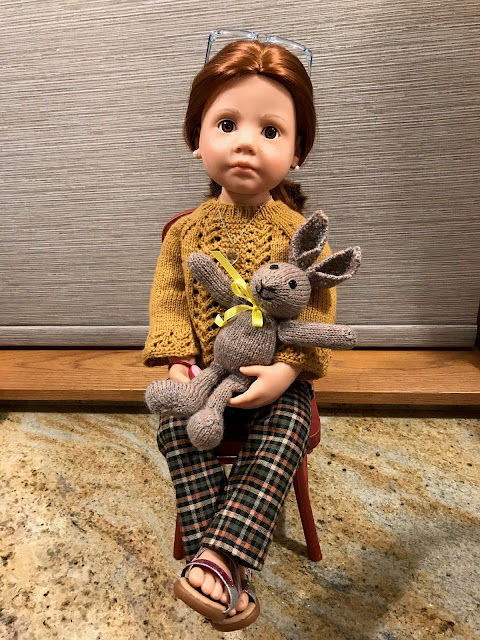 I realized the next day that I had forgotten the tail, which was quick to remedy. We had to take another photo. 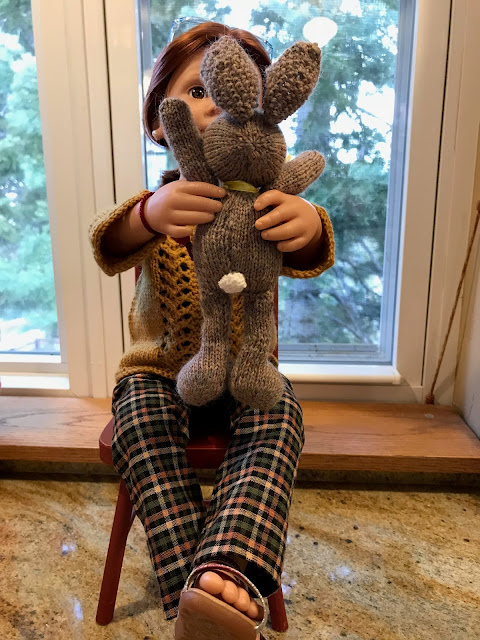 Remember the story of Vroni's birthday party? I decided to make a little book out of it for the grands. My laptop is a MacBook, and the photo program has the option of making projects like books (mostly photo albums) and calendars. Some of the options for pages have text and photos, so I wrote it up, printed off a copy for DH to proofread for me, and now it's ready to send to Apple to print as a paperback. Here's the cover (from a screenshot, so it's a little fuzzy). 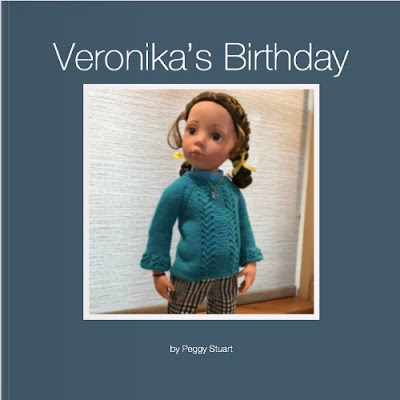 I made a book for Daphne when she was a toddler, so this isn't my first foray into Apple publishing. Her book was all about her first year of life using all the best photos of her. I don't have permission to use the photos of the dolls, so I can't sell the book, but I'm going to give copies to the grands, keep one for myself and give one to Therapy Animals of Utah for their silent auction. It took 24 pages to get all the photos in. I had to change some of the wording to get it to fit without shrinking the type.

We made two trips to Run-A-Muk Dog Park during the week.

What's on my needles: A hat for one of the "girls." I'm using the Newsboy Cap, but without the bill. The pattern is a free download by Deb Denair.

What's on my Featherweight: Pants and skirts for the "kids."

What's in my hoop: Still my Spring Flowers appliqué quilt. I think I'm past halfway with the hand-quilting.

What's on my loom: Bureau Scarf to use up the last of the warp.

What's on my iPad/iPhone: Finished Listening to Agatha Raisin and the Vicious Vet by M. C. Beaton. This author is always a good read, so I downloaded Henrietta: The Daring Debutantes Series Book 1, also by M. C. Beaton as Marion Chesney. When I finished that, I started Envious Casca: Inspector Hemingway Series, Book 2 by Georgette Beyer. On my Kindle app is Miss Braithwait’s Secret by G. G. Vandagriff.

What's my tip of the week: Moths of all life stages die at 130ºF or higher. You can't put big rugs into the oven, but from time to time I put knitwear, incased in pillowcases, into the oven, turn it on to warm (170ºF) and turn it off again when the oven beeps that it has reached temperature. They should be good and dead then. I've never had any moth damage to quilts with wool batting, so I think the adult moths can't get inside to lay their eggs. Vacuuming helps keep them down. I use plastic bags for my yarn stash.

I got some lovely photos at Rebecca's today for next week's blog.

Another posting that proves you are an overachiever. Love the matching sweaters on your dolls!

Thanks, Irene. It keeps us out of trouble.

Wow, you ladies sure have been busy.  I love all those beautiful projects you ladies made or in the process of making. The little bunny is super cute.

Thanks, Janet! I’m lucky to have two wonderful stitching groups to inspire me.

Love the colors in the bureau scarf.  Those dolls!  You keep ramping up the cute factor.  The rabbit is adorable.