High Fiber—Bad Surprises and Good Ones

One of our neighbors put a quilt up on the side of their house. 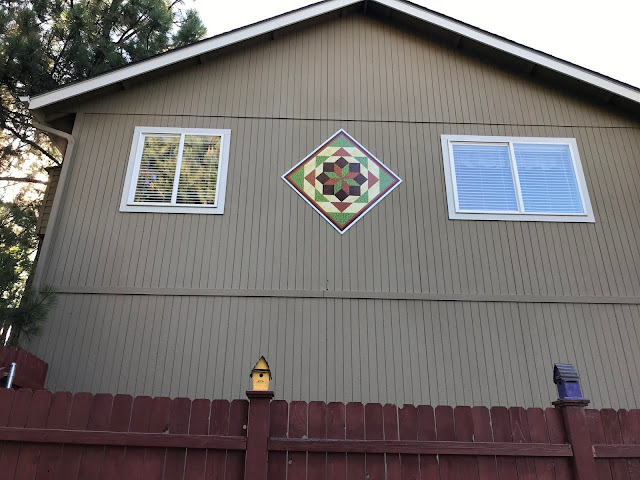 Here I've cropped it so you can see the detail. It reminds me of the quilt designs the Pennsylvania Dutch put on their barns. 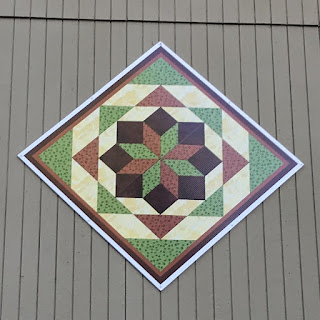 We discovered it during our walk along the Larkspur Trail. 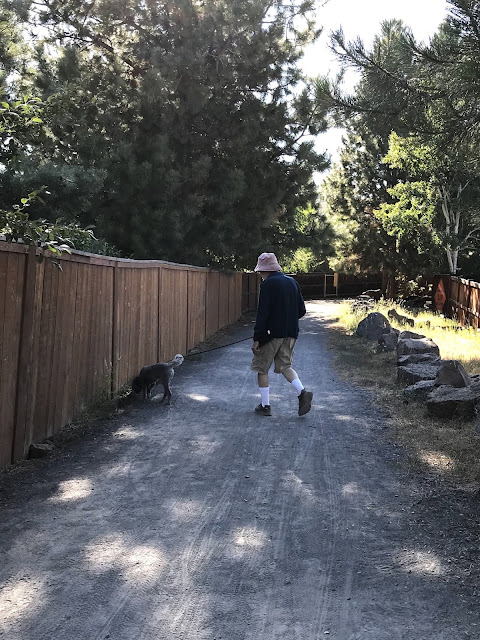 We haven't gone this far for some time, and we discovered some new things, like this sign. 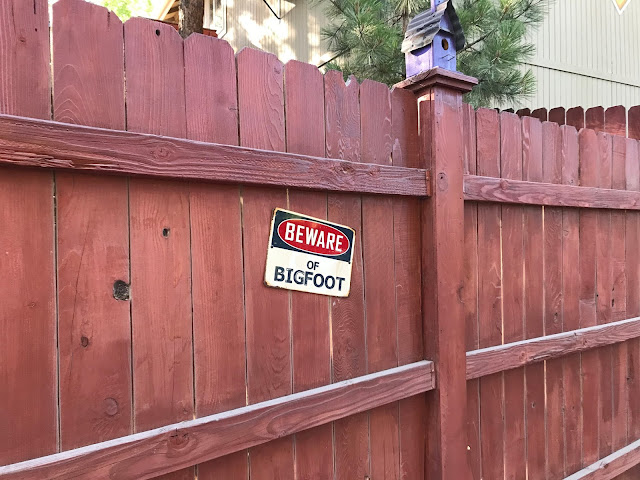 In the meantime, the whole cloth quilt is coming along. 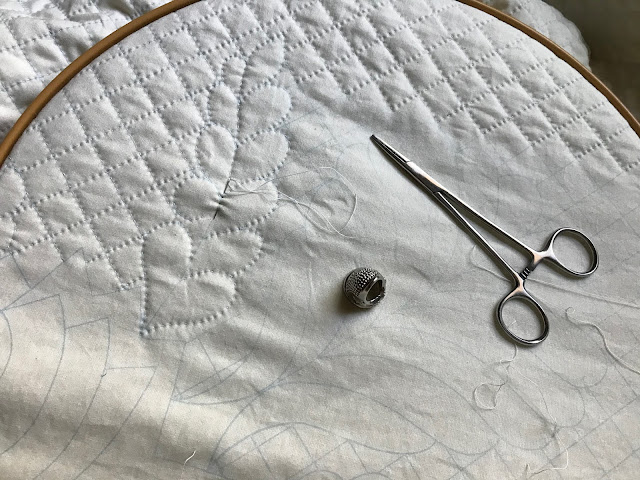 I also got a little knitting done on my Which Came First shawl. I'm ready to start the golden yellow yarn now. 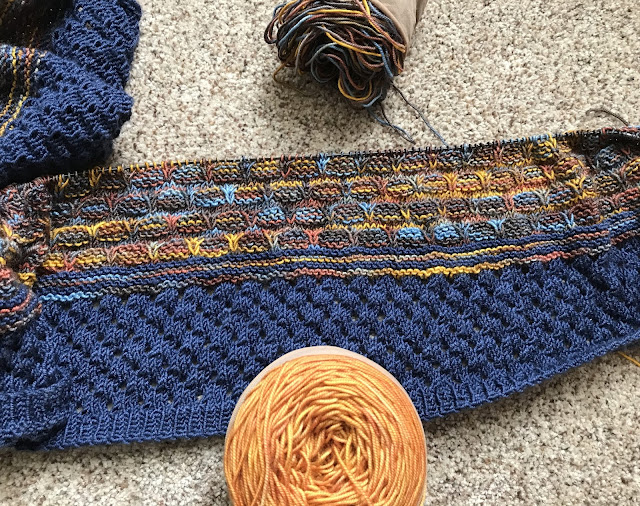 Out in the garden, things are moving along, too. The radishes will be ready to start harvesting soon. 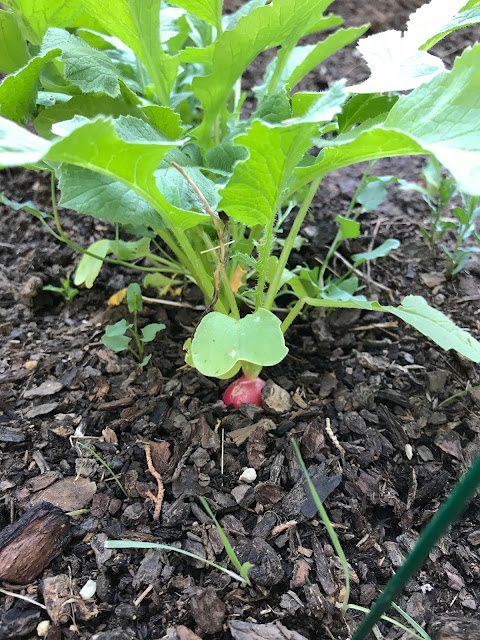 Some of the pea plants have pods on them. 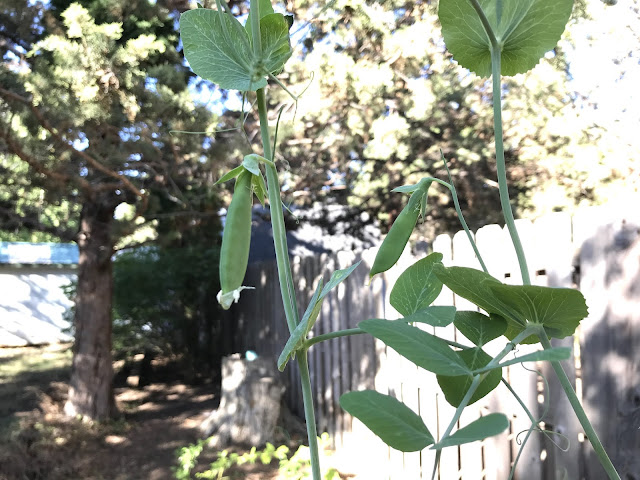 The largest zucchini is taking over the zucchini plot. 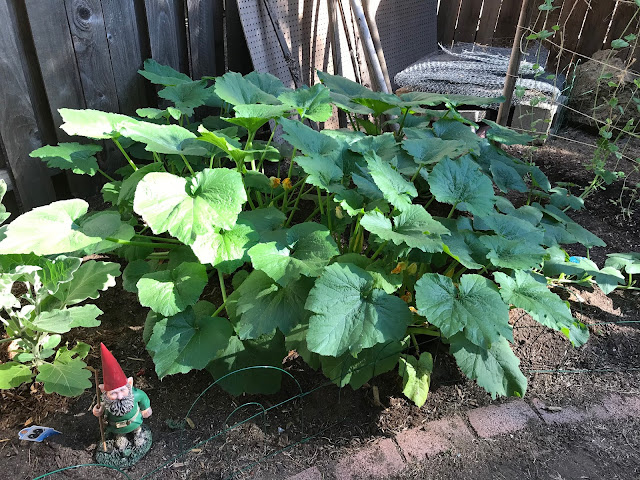 We don't mind too much, though, because it is starting to produce fruit. 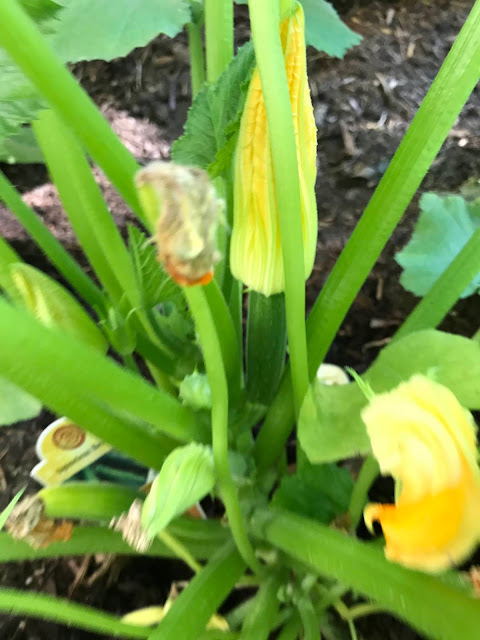 The blueberry plants have a couple of blueberries that will be ripe soon. 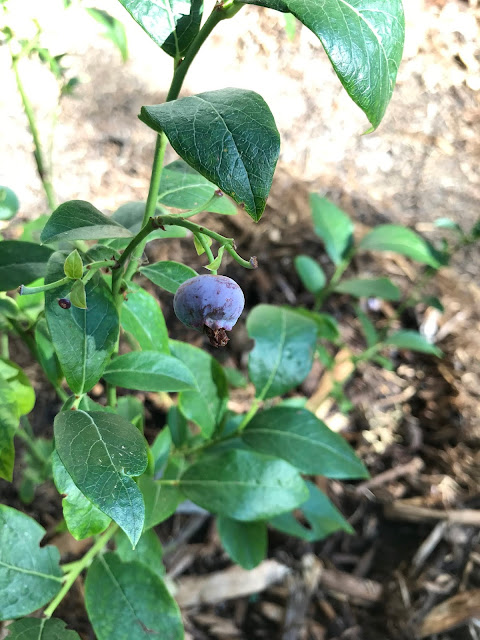 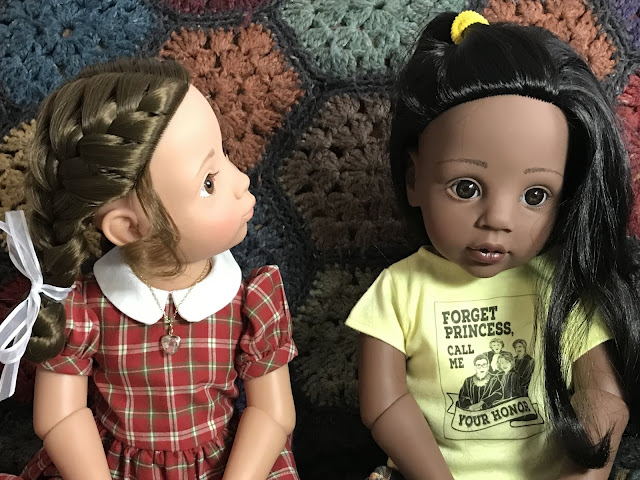 We had a little unpleasant excitement this week. Daphne developed a fever. She hasn't been playing with other children or going out in public except for dance class, which is done in groups of only five children each with masks and distancing. The health department helped the studio work out the logistics. They took her immediately to be tested. Fortunately, they have the Mayo Clinic for medical, so they were able to get the results back in 36 hours. It was negative, but it was an anxious time until they got the word. They have since decided it's stomach flu, and she is feeling better. She's attending dance class online for now. Our daughter and her husband have decided to do the online version of school when it starts again. They will have to sign up for the whole semester online, and they feel it's likely that school will have to go back online before the semester is over. This way will be less disruptive.

In other news, Dusty had his teeth cleaned and needed to have two extracted. We had three adenomas (moles) removed at the same time, since he was out for the teeth cleaning procedure. He's back to normal.

What's on my needles: The Which Came First Shawl. Just starting the third color.

What's in my hoop: Still the Whole Cloth Quilt. A little more progress this week.

What's in The Doll's Storybook: Courage. Mariah has to be brave and do what she needs to do, even though she is afraid.

What's on my iPad/iPhone: Still listening to D. E. Stevenson's Mrs. Tim of the Regiment. It's written like a diary and is very funny in places and always entertaining. Her books are like a little visit to  England and/or Scotland during times not that long ago.

What's my tip of the week: We have been trying to avoid going to the store unless we absolutely have to. One way we have been able to spread out our trips is by using powdered milk and powdered eggs to stretch out the fresh versions of these two staple items. I've found powdered milk to be perfectly fine in cooking and baking. I just add it to the dry ingredients and increase the liquid ingredients by the amount needed to reconstitute the milk. If we're going to drink it, though, I've found that it tastes much better if it sits in the fridge for about 48 hours after mixing. We have been getting whole milk that is ultrapasteurized, which lasts a lot longer than regular pasteurized milk. I mix 2/3C instant powdered milk with 2C water in a bottle that holds about 2-3/4 C. (I use a small funnel, so I don't spill the powder.) I put the lid on the bottle and then tip it back and forth to mix. Then I add some whole milk to the mix, leaving a little room at the top. I give it a shake before serving after 48 hours. For eggs, I do the same thing for cooking or baking: mix the powder with the dry ingredients and the liquid with the liquid ingredients. It's usually 1/4C powder and 5T or 1/3C water for two eggs. We haven't had to mix them up to eat scrambled eggs yet, but that may happen. Usually we have to go to the store for a prescription or something, and we always get eggs when we do. Eggs keep a long time in the refrigerator.

Janet, we had 21 new cases yesterday. I'm waiting to see if they are from the memory-care facility where other cases have been, but even though our governor said we have to wear masks any time we can't stay 6' apart, indoors or out, enforcement is a challenge.

Barb, you're right. Kids don't always respond in the same way, and there are some serious complications specific to them.

So glad that Daphne is OK! Children are always a concern.

I'm so happy to hear that Daphne didn't have the virus, but I can sure understand how terrifying that must have felt.  The county I live in stayed with only about 15 cases for months.  Suddenly our numbers have jumped  up to 73 as of Saturday including an employee of our local health dept.  Same with the county on the north side of the MO River.  We just don't go anywhere without our masks even though our governor will not issue a mandatory mask order.

I love the barn quilt & the Beware of Big Foot sign.

Thanks for the tip on how to use the powdered milk in baking and cooking. It's hard to come by here though.

We're staying in or masking if we have to do anywhere. We've had people come to the door. I tell them to put on a mask or go back to the bottom of the steps. We had 21 new cases in Bend yesterday. That's a record. In Portland, where people have been protesting for a couple of months with masks on, their infection rate is lower than here. I think I would almost feel safer demonstrating with Portlanders.

Glad Daphne is ok!   You stay safe and healthy too.