The Brioche Shawl Feathers shawl is coming along. 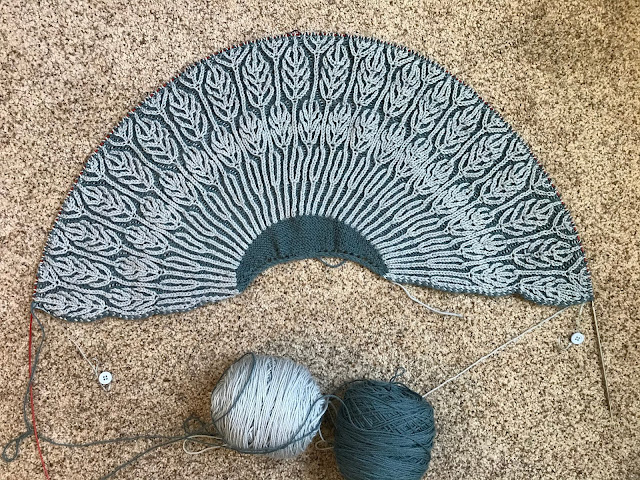 I put in a lifeline, which I move every few inches. The buttons are to keep the lifeline from coming out. It's fairly complicated, so I have to pay attention when I knit, but it's entertaining, and I'm getting accustomed to putting my stitches back together properly when I make a mistake. If I'm watching TV, the hand-quilting is a better choice for something to work on. 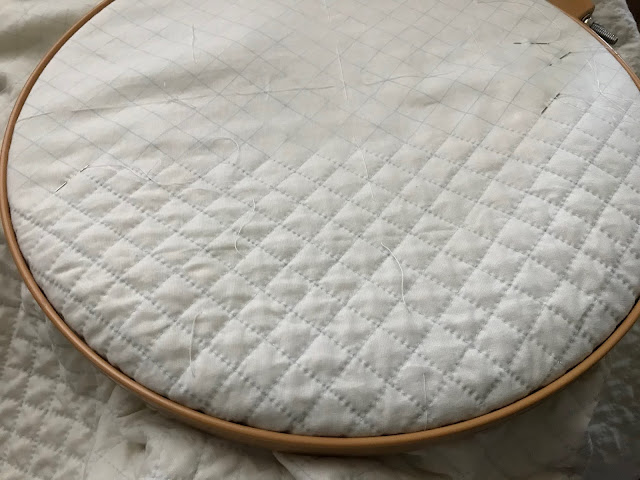 I do need to CO a project for the KAL in the Goetz Doll Lovers group on Ravelry, though. I plan to make something for Daphne's birthday doll. This will be the Cabbagetown Jacket, which makes a nice winter coat, but I'm sizing it down for the Little Kidz doll Lotta. 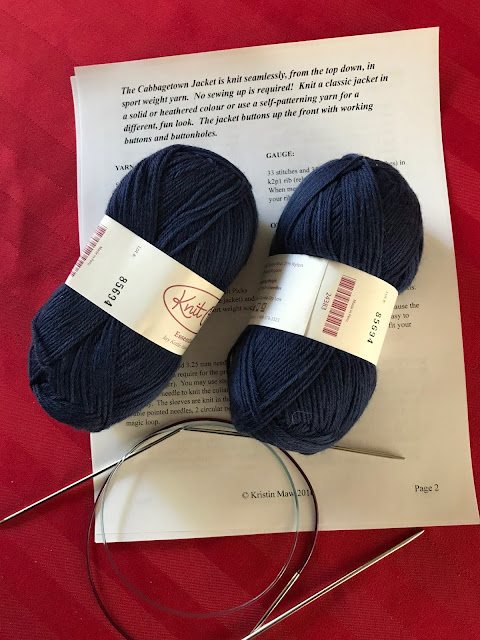 I've rewritten my Wonderland Turtle turtleneck pattern for Emil's book, including instructions for sizing it for the plumper American Girl Dolls. I think it looks good on Emil, though. I plan to include the pattern at the end of the three stories in the book. 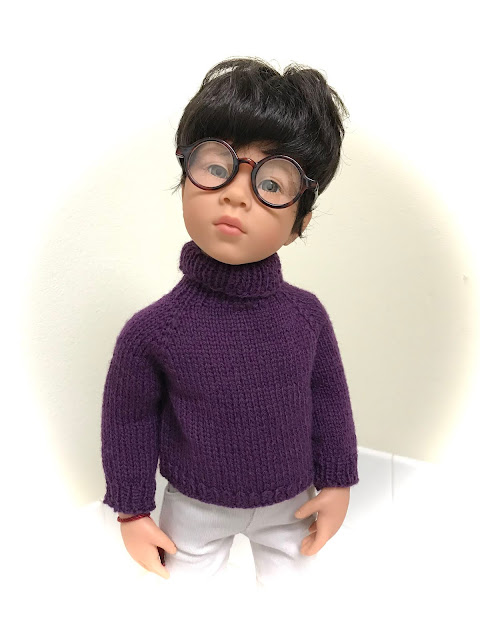 Spring is trying to come to Bend. The daffodils are starting to bloom. 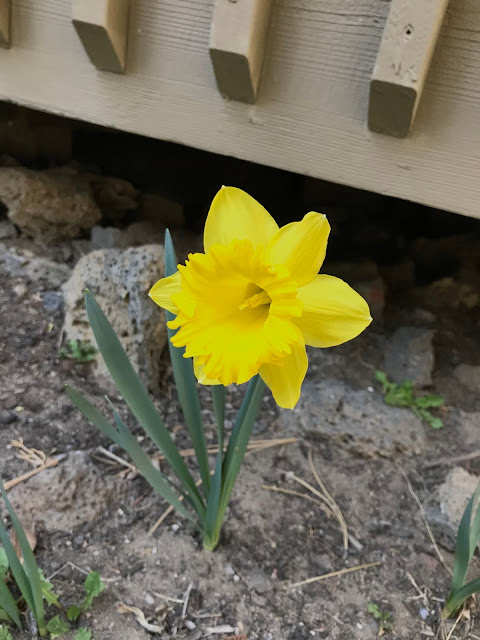 The cherub in our backyard is keeping an eye on some little white flowers. DH says they're weeds, but the cherub and I think they're pretty. Not much else is blooming outdoors yet. 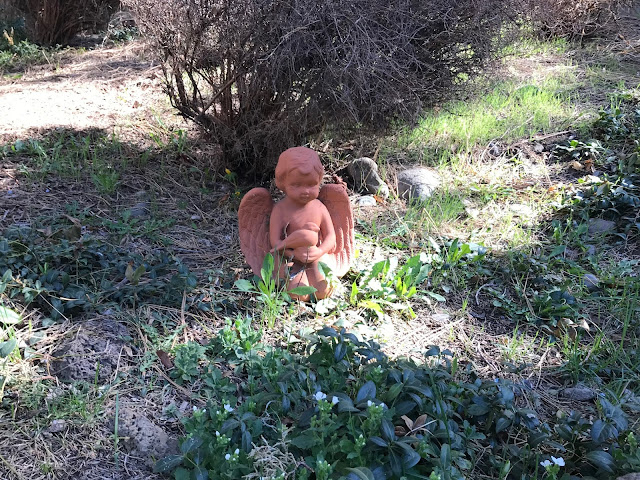 Indoors, however is another matter. The tomato blossoms are fading and the little tomatoes are growing. 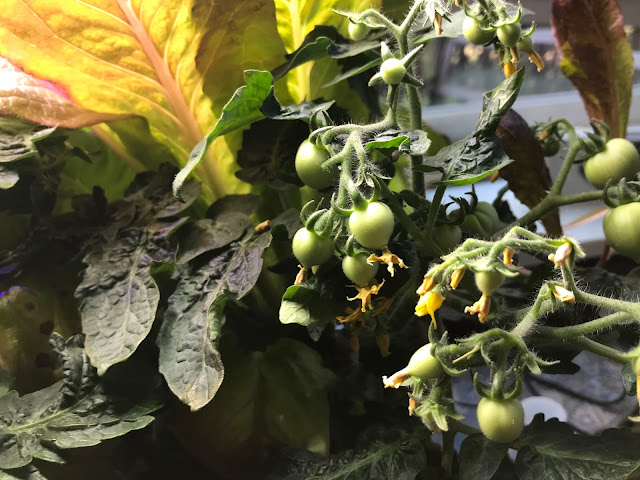 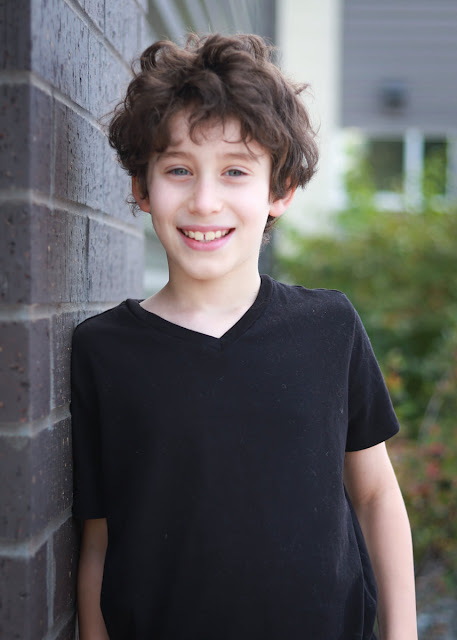 They celebrated after school on Tuesday, however, because his parents were scheduled to get their second dose of the Moderna vaccine on Wednesday, and they wanted to be prepared in case it made them sick. It did. Fortunately, they were well again within 24 hours and happy to be finished with the vaccine.
I put a "Shop Now" button on the Facebook page for The Doll's Storybook. It goes to the BookBaby store, rather than to Amazon or Barnes & Noble. This is because when you buy through the BookBaby store, $7.48 goes to pediatric cancer research and treatment, but when the book is purchased elsewhere they only get $1.26. The book still costs the same. However, people who get free shipping from a particular bookseller will save that cost. Anyone who would prefer to do that can donate through our fundraising page.
What's on my needles: The Brioche Shawl Feathers Shawl, making progress. Also ready to CO a winter coat for Lotta.
What's on my sewing machine: PJs for Lotta...soon.
What's in my hoop: Still the Whole Cloth Quilt. A little more progress this week.

What's in The Doll's Storybook: http://thedollsstorybook.blogspot.com ;

What's on my iPad/iPhone: Finished The Black Madonna by Stella Riley. Now listening to The Unexpected Mrs. Pollifax by Dorothy Gilman, recommended to me by an online friend..
What's in my wine glass: Monastrell Bacanisimo Red from Spain. Not bad.
What's my tip of the week: If you rinse more lettuce leaves than you need for your salad, you can store them in a plastic bag or container with paper towels. They will keep longer.
Where's my book: Mariah: Stories from the Doll's Storybook is available from Amazon worldwide. Also available from BookBaby, Barnes & Noble and other booksellers. Royalties go to support pediatric cancer research and treatment. The three stories in the book first appeared in the blog and they are reproduced with few changes. The stories (and links to them) are Being Little, Besties, and Distraction.
Note: This blog post was produced on the iPad and the MacBook, using the iPhone for some photos and some photo processing. No other computer was used in any stage of composition or posting, and no Windows were opened, waited for, cleaned or broken. No animals or dolls were harmed during the production of this blog post.

Thanks, Janet! I hope you're doing OK.