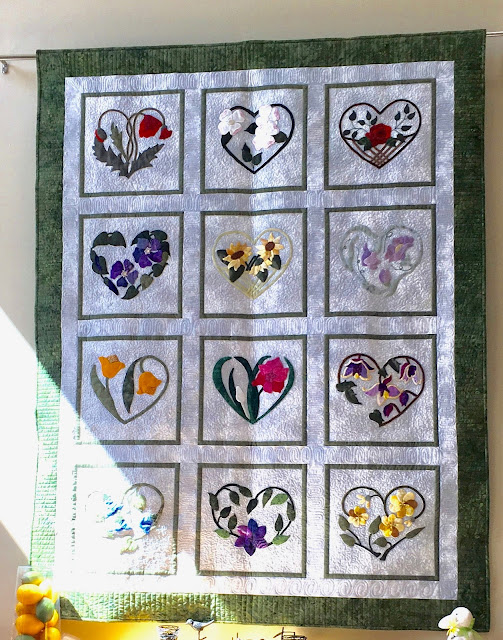 It was great to see Karan’s appliqué quilt on the wall.

Several people were leaving town for the first week in July, when we usually have our meetings, but we had a fifth Thursday, so we decided to meet. Karan is working on her Christmas appliqué quilt. 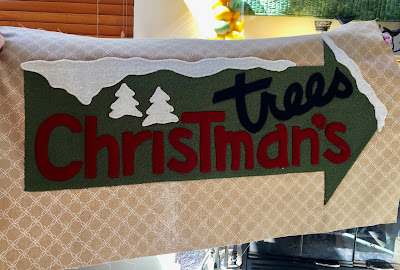 Now she has also finished this snowman block. 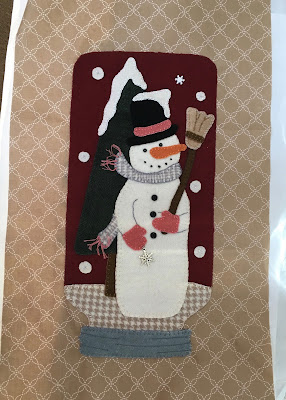 And now she’s working on this one. 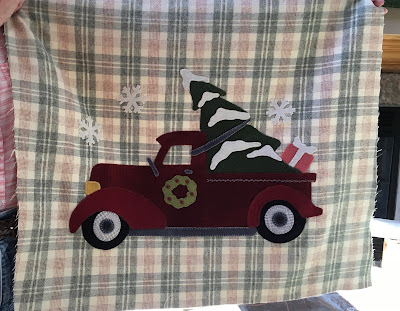 It was good to see everyone. It has been awhile. While there, I CO for Matty’s Layered Look pullover. It’s a quick knit, and now it’s done. 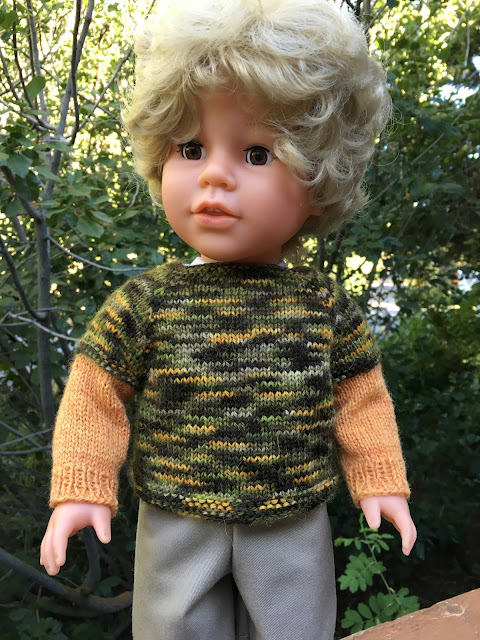 The yarn is Knit Picks Imagination in "Woodsman" (discontinued) and Palette in "Golden Heather." Next I made Matty a shirt and shorts set out of homespun from my stash. 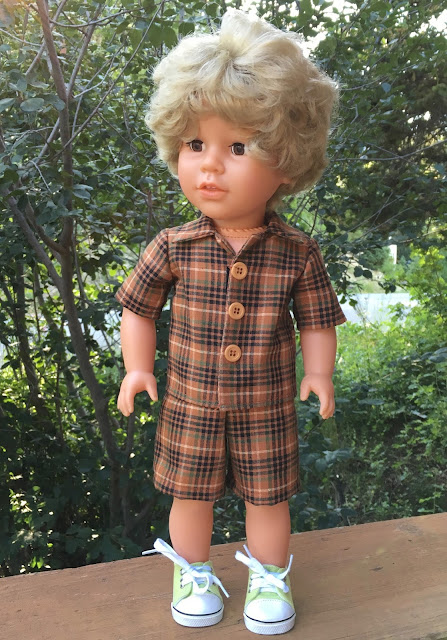 For one final outfit, I sewed some long pants to go with Matty’s French Back-to-school Cardigan. The long-sleeve T-shirt is from this seller on eBay. It comes in a set of four: blue, lavender, orange and red. 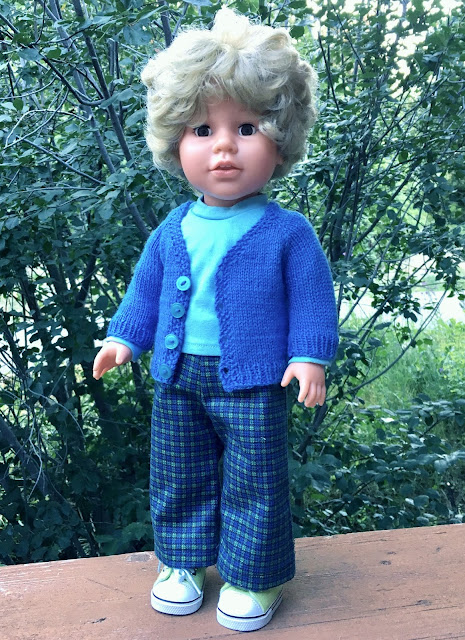 When I ordered Matty, I also ordered some PJs for him from the company, so they should be there already. The clothes I made him are in the mail and could be delivered today, but Johan's birthday party is July 8th, so there's plenty of time. Now I’m working on a more or less identical Layered-look pullover for Carter to keep.

Matty and Carter are My Sibling/My Pal dolls. An internet friend who lives in the UK saw the photos of Carter and decided, after checking out the cost of shipping, to purchase one for herself. It will be fun to see what she makes for him.

It was making me hot to look at Mandy in her steampunk costume, so I changed her into something casual. Here she is, ready to go berry picking. I didn’t have the heart to tell her we don’t have berries yet. 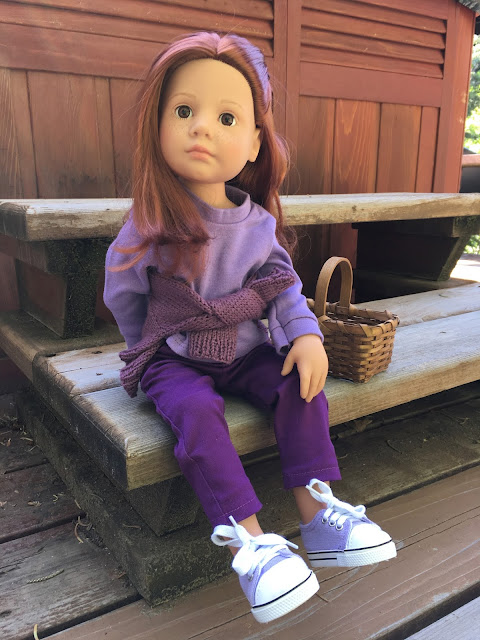 I need to get busy on making clothes for Carter and the Habitat Girl. I’m looking at outfits a little more stylish than the basic patterns I used last year, so I’m doing some experimentation. I dove into my quilting stash and put together this outfit for Vroni (for now, then at Christmas, it will go to DGD2’s dolls). 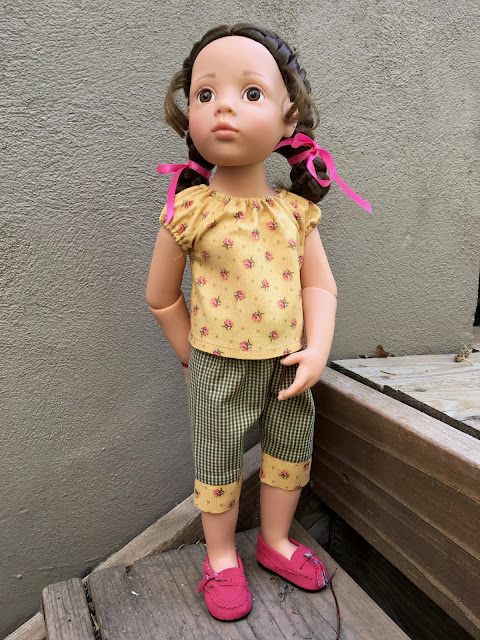 I think it needs to be a little baggier, especially for the Creatology doll I’m expecting to be outfitting for Habitat’s silent auction. I picked up some fabric at the quilt shop because I have very little pink, and I wanted something to go with the pink and white striped leggings I got on sale awhile back.

The pups received their summer haircuts on Wednesday. We have so many burrs in the backyard and on the hiking trails now, it isn’t practical for them to be in something more poodle-ish. We went to Gorgoza Pond later that day, then to Run-A-Muk Dog Park on Friday. (You can just see his pink tongue as he runs down the stone walkway.) 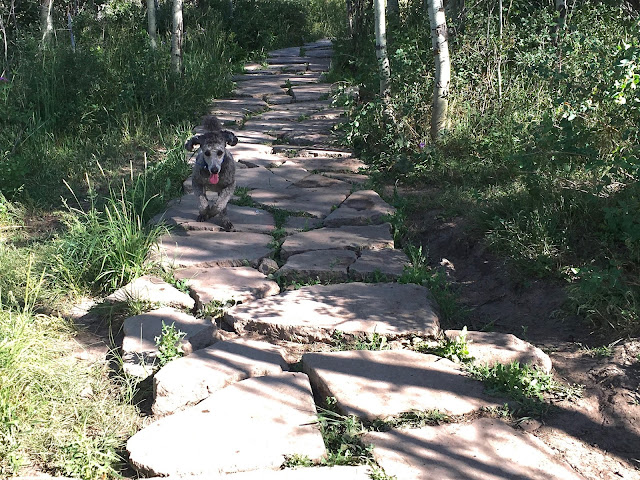 On Saturday, it was Toll Canyon. We noticed a lot of new signage for the trails, so Basin Rec has been busy. The Fairy Tree had a couple of Barbies.This was something new. You never know what you're going to see hanging from the Fairy Tree. 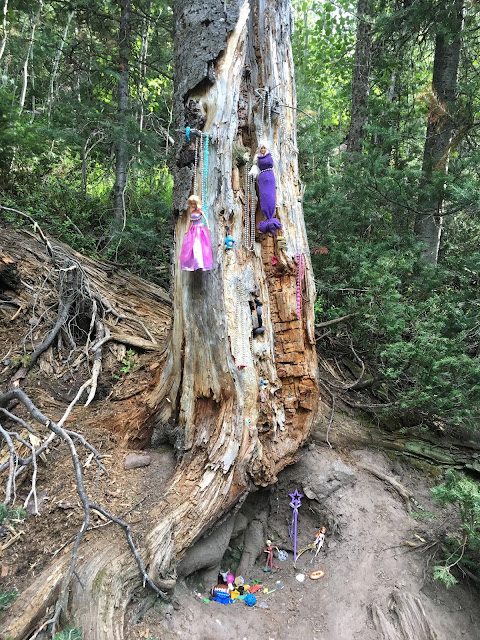 I took a photo of my boys. (Guess which one hasn't had his summer haircut yet.) 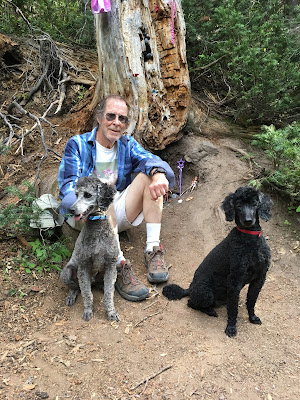 We stopped at the “Watering Hole” on the way back. Dusty is getting much braver about getting into the water now. I’m hoping we’ll have him swimming this summer. 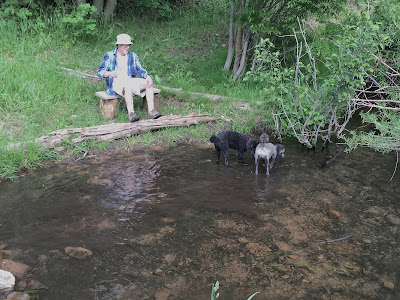 Rocky is back to his old trick of running ahead on the way back, and Dusty should have been worn out from tearing like mad up and down the trail, trying to keep track of all of us.

One of our grandkitties, Fluffy, had surgery on Tuesday to remove a mass from her mouth. It was scary, but she came through the surgery well. The biopsy came back on Thursday, and it was negative. Whew!

Tour de Fleece has started on Ravelry. I'm participating, but nothing much to show yet.

Lighted sign as you enter our neighborhood: "Drive Slow." I need to lose a few IQ points to be able to do that, but I'll happily drive slowly. Happy Independence Day to all you US Americans. Don't catch anything on fire, and drive slowly!

What's on my needles: Carter’s Layered-look Pullover, this time to keep.

What's on my wheel: Stanzi is out and at work.

What's on my iPad/iPhone: Funny in Farsi: A Memoir of Growing Up Iranian in America by Firoozeh Dumas is for the road. Listened to Mercedes Lackey’s Fortune’s Fool. Now listening to Between Heaven and Texas by Marie Bostwick, another of the Cobbled Court Quilts series. On the Kindle app, still reading Undeniable by Laura Stapleton.

What's in my wine glass: Frontera Cabernet Merlot in the big bottle.

What's my tip of the week: We all know tape is good for putting things together, but did you know it can be good for taking things apart? Fine cactus needles, splinters and insect stingers can be removed by applying tape (transparent, cellophane, masking or duct) gently to the affected area and pull off. Just be careful with insect stingers; some insects, like bees, leave behind the little sack with venom, and if you squeeze that, you can make matters worse. Tape can also be used to pull the tiny bits of threads away from a seam you’ve ripped. Also for lint or cat hair.

I learned to sew when I was eight because my dolls only had their "coming home" outfits. After a lot of nagging, my mother made the same dress in three different sizes, all the same fabric. She didn't enjoy it, but they were beautifully done. I would have thought I had gone to heaven if someone had donated dolls and clothes to my collection.

Karan does beautiful work. Before she moved here, she worked in a quilt shop and had her own long-arm at home. (I have two long arms, but they don't do machine-quilting.)

The applique quilt is beautiful.  The winter applique pieces are wonderful as well, but I really don't want to let my mind go to cold weather just yet.  Those doll clothes are always darned cute.  I am laying off with the doll clothes for my grand daughter for now.  Suddenly other relatives have gotten on the band wagon with her, and donating their old, gently used dolls and clothes to her collection.  Lucky girl.

Comment by Peggy Stuart on July 5, 2017 at 12:42pm
Unless things change, we're planning on Bend, Oregon. It won't be for another year, though.

I agree that quilts are not "cheap" to make. Making doll clothes is less expensive for sure. Where do you plan to move when the house sell's?

At least doll clothes are less expensive to make than quilts. We've had a lot of expenses the past couple of years that have eaten into our savings. Now we're trying to get our house ready to put on the market so we can move out of the eternal snow next summer. The expenses have cut into my quilting budget.

I love the applique quilt.  You do such beautiful work on those doll outfits. It must be fun whipping those up.  I'm trying to get three quilts done before the end of Summer to take to my three youngest grand children. Got one top done except for the border and working on the second one.  Going up to the Rec Hall tomorrow with a couple of my friends to work on it. Once I get the top done to this one I will send it to the long arm quilter while I start the 3rd quilt.