The Argyle pullover is done.

I went on to CO the Sweet Sweater Dress using this pattern: http://www.ravelry.com/patterns/library/55-sweet-sweater-dress

I used Debbie Bliss Cashmerino in Teal Blue and White. It was nice to work with. However, the yarn used by the designer for the project had more yardage than the one I used, and after finishing the body and the first sleeve, I could tell (by weighing the sleeve and what was left of the yarn) I wasn’t going to have enough. Fortunately, I had left the yarn attached, rather than cutting it off, which would have used more yarn because of the weaving in of ends. I guessed at removing six rows of stockinette stitch from each sleeve would be enough, ripped out the first sleeve to that point and reknit, then, without cutting the yarn and using the other end, I CO the second sleeve and knit it the same. When I got done, I had 65” of yarn left for sewing up and sewing on the buttons. I cut it off once I was sure. 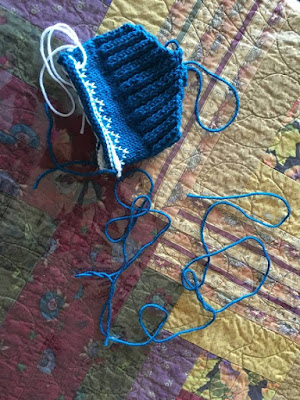 The I-cord sash had to be knit out of the contrast color (white), but the dress was finished. Here it is blocking. 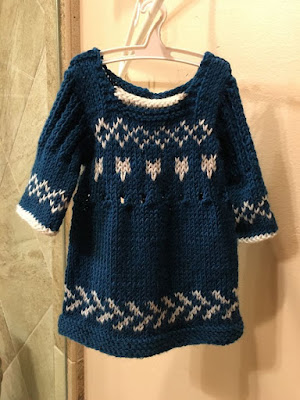 The pattern has a cute head band, but since I’m out of yarn, I will have to make that to go with something else. Here's the finished dress, though, worn by Dolly, an expert model now: 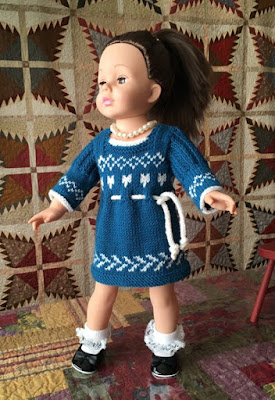 I did get SOME sewing done this week. We’ve been practicing for The Messiah Project, a concert of the most popular selections from “The Messiah,” sponsored by the Park City Interfaith Council with professional soloists, a volunteer choir made up of people from most of the faith-based organizations in town (which is where I come in) and an audience that gets to sing along to some of the chorus pieces. Maestro Jonathan Griffith (he of Carnegie Hall fame) came to direct us. So here is where my sewing came in. We had to cover our score in black, so the books would all look the same from the audience. We were told we could go to Staples and have them spiral-bound with a black cover or paste black construction paper on them. Or whatever would make them black on the outside. I had no construction paper and no car to go get some. Staples was out for the same reason, but…I have some black fabric in my quilting stash. I also had some buckram interfacing. Friday morning was spent making a cover for my score. 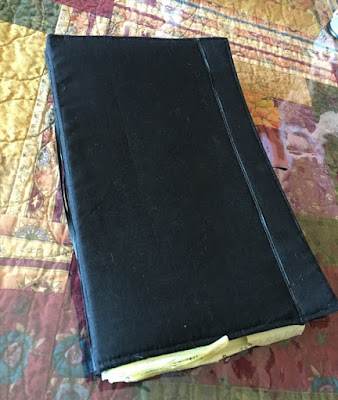 I used black ribbon and staples (small S) to hold the cover to the book, and some ribbon down the back goes over my hand so my thumb doesn't get tired while I’m holding my music. We had a practice Saturday morning, and several people said they would pay me to make one for them. I said they couldn’t pay me enough to make another one. (Although now that I have the engineering down…)

The concert went well. We had a lot of fun. I should soon have a photo to share of the chorus and soloists, but for now, here’s a photo of the reception after the event, where we..ahem..vocal artists...mingled with members of the audience and ate cookies. 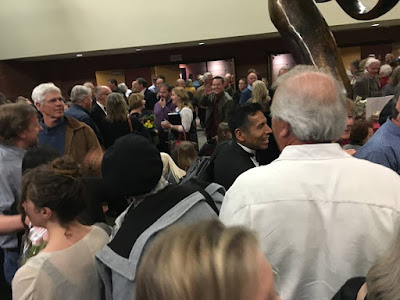 So that’s done, and the doll clothes are almost done.

However, there is more ending besides that, thus “Fat Lady’s Song,” and this part is especially for people who have participated in the Knit Picks Knitting Community.  I received an email this week saying that the Knitting Community is closing/ending. This website has been part of my life for more than seven years.

I don't know when I joined, but my first blog post was November 26, 2008. It took me a few days to learn how to post photos. My first one was on November 29, 2008. I participated in the speed-knitting contest and came in third. Since joining the Community, I have written 416 blog posts and uploaded 1,753 photos into 47 albums.

Susan Dearnell, Cheryl Waters and I were interviewed for the April 6, 2011 podcast, #122. We were acquainted before that through the Community, but we got to know each other better through our PMs on the site where we pondered what questions we might be asked for the podcast. We began communicating, sometimes as often as several times a day, through PMs, where we shared not just our fiber projects but also our lives, including all the family and social agonies, as well as health problems. Susan was relatively new to knitting, but amassed a knowledge of fiber-related skills very quickly with a fearless intensity that amazed some of us. Maybe she sensed she didn’t have long to participate in this activity. A year and a half ago we lost Susan, as we have a few other friends, including Xena the wonder dog and yarn skein impersonator, but some of us have continued to stay in touch by PM on the site.

Even though I was also a member of the Quilt With Us social network, sponsored by Connecting Threads, part of the same company as Knit Picks, my special home was on the Knitting Community. Where else could I be known as one of the three “Fairy Godknitters.”

I can only surmise why the website is closing. Almost from the beginning it was targeted by spamers, so blog posts had to be approved before they could appear. Also, Ravelry seemed to provide an outlet for knitters/crocheters/spinners/weavers, but there was no such alternative for quilters. I'm sure it's expensive to maintain a website of this sort.

For whatever reason, the website is singing its swan song. Some of us have special friends in the Knitting Community, and we don’t want to lose touch. If you're a member, let me know if you’re interested in some sort of “afterlife” for the Knitting Community, either by PM, comments to this blog on Blogger or send me an email to zwergpudelfrau@gmail.com.

Quilters: Fear not. I will be quilting again.

[Cue fat lady and swan for their respective songs.]

What's on my needles: Ready to CO final doll knitting project (for now).

What's on my Featherweight: Progress made on cleaning fiber studio, but still more to do.

What's on my iPad/iPhone: Finished "Magnificent Devices" by Shelley Adina and narrated by Fiona Hardingham and looking forward to the next in the series. Downloaded "No Time Like the Past" by Jodi Taylor, but haven’t started it because of the busy week with The Messiah Project. Also reading "A Lady of High Regard" by Tracie Peterson on the Kindle app. I think I would have liked this one as an audiobook.

What's in my wine glass: Lindemann’s Cawarra Shiraz Cabernet, 2014, in the big bottle. I needed it this week.

What's my tip of the week: Ever have a knitting pattern that says to wind of a small amount of yarn for a small section of knitting? If you have a center-pull ball of yarn, you don’t have to do this. Just work the small section using the yarn from the outside of the ball. You can also use this trick when you have a lot of sts for a long-tail CO (say…300+). Tie the two ends together and pretend they are one strand of yarn. Do your CO as usual. Both strands will be unlimited.  True, you will have two extra tails to weave in, but a small price to pay.

To watch curling, I would definitely need my knitting, even for the championship! I'm hoping the doll clothes survive. It's why I'm only using machine-washable yarn. Sock yarn is the best, because it contains nylon for wear in addition to Superwash wool.

Well, for goodness sake!  I just accidentally deleted my post!  Let's try again - I'm sorry that your knitting community has been shut down, but it looks like a group of you have it all in hand.

I'm so impressed with the doll clothes you've been knitting and I absolutely adore the little dress.  I'd happily wear it myself (in a much larger size, or course).  A friend of mine is busy knitting one of your patterns - I think she said it was the sweater - for her granddaughter's 18" Canadian doll.  She knits while watching the Canadian women's team playing in the Women's World Curling Championship.

I think that your granddaughter is going to have a collection of doll clothes that will become family heirlooms.  I can see your great granddaughter playing with the doll and her wardrobe sometime way in the future.  What a treasure she will have.

JB, your comment comes at a good time. The group is up and running, as of late yesterday. It's called "The Frog Prince and his Knitting Community Orphans." You can join here: http://www.ravelry.com/groups/the-frog-prince-and-his-knitting-comm...

We could even have a quilting discussion in the group. We don't have any rules except to be civil.

Peggy, I hadn't heard about the Knitting Community closing down...that's a shame as there is a lot of info there.  Please keep me in the loop regarding an "afterlife" group.  Maybe we could form a group on Ravelry.  I spend time there most days. I believe we are friends there as well. Love seeing the girls' new sweater and dress.

My teeth almost hurt from the sweetness of all the doll clothes you've done!  Nice work with your music score.

Good Morning, Peggy!  Sorry to hear you are losing such a favorite web site.  I love QWU, and spend a lot of time on it during the day!  I would seriously miss it if it were gone.

What a great music cover!  Black construction paper indeed - don't ever say that to a creative person such as yourself!  I'm not surprised you were asked by others to make one for them!  That was the first thing I thought of when I saw the photograph.  Think of some exhorbitent charge, take orders (one time only - no asking later), set up a manufacturing line, and voila!  Egg money!  :-}