By the end of last week, we had too many pairs of shoes to fit in the shoe bench. 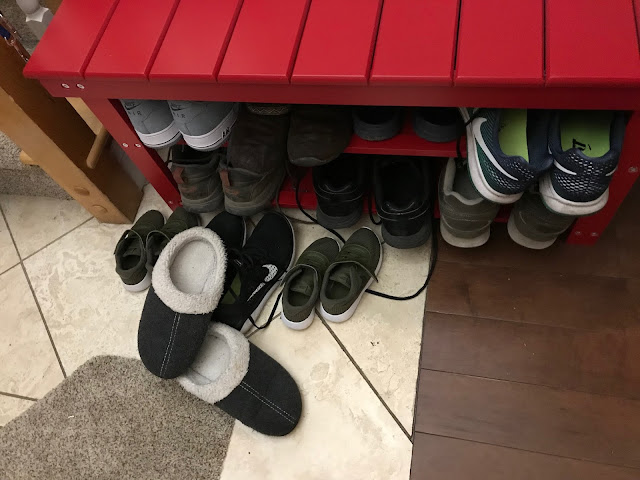 It was a week of putting things away and organizing. We pulled out some of our Indonesian decorations. 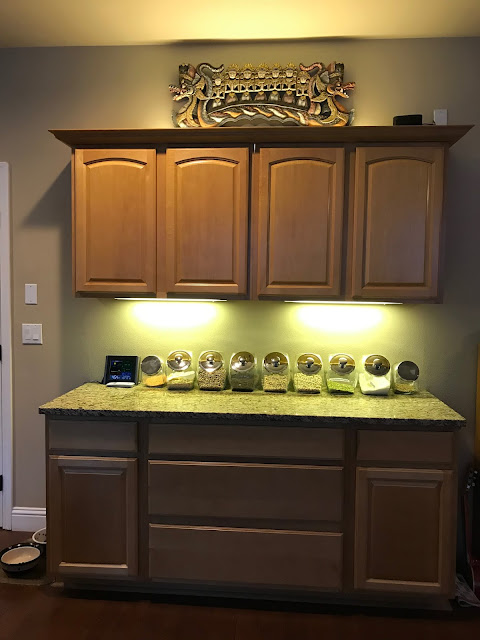 The guest bath had to be readied for the first guests. While cleaning the tub, I discovered a crack in the tub (fiberglass). It may need to be resurfaced or replaced. We plan on replacing all three of the upstairs faucets, because they are all missing parts. 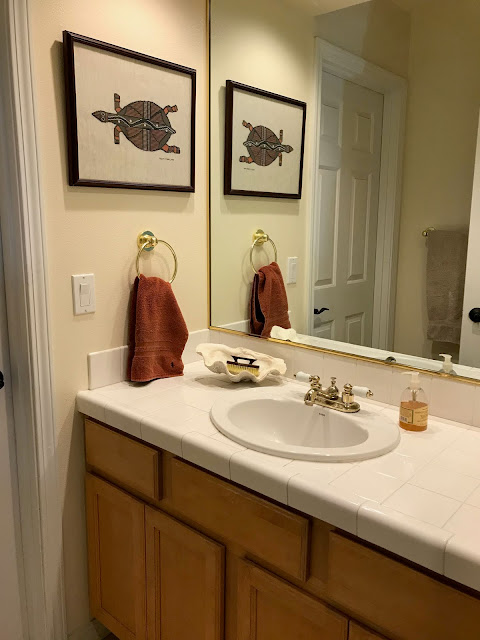 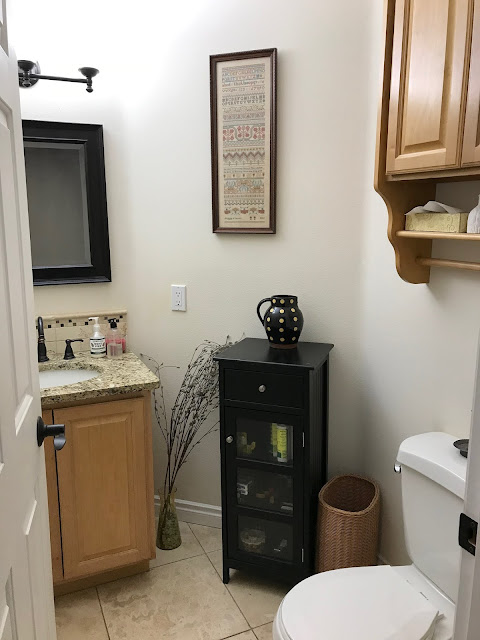 We keep finding damage made by the move. All of our lamps looked like this. 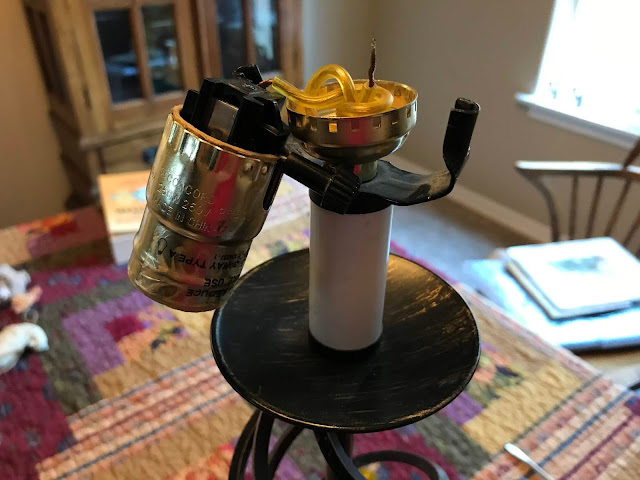 We had planned on replacing the lampshades, so we gave them away before our move. That was probably a good idea. We're still missing some things, but we're hoping there's still a box that should have come into the kitchen.

I knew our two younger grandsons would be into everything, so I advised the dolls to move out of harm's way after the photoshoot for the latest story in The Doll's Storybook, "It's a Boy." They liked the kitchen cabinets, where they could watch the action and stay safe. 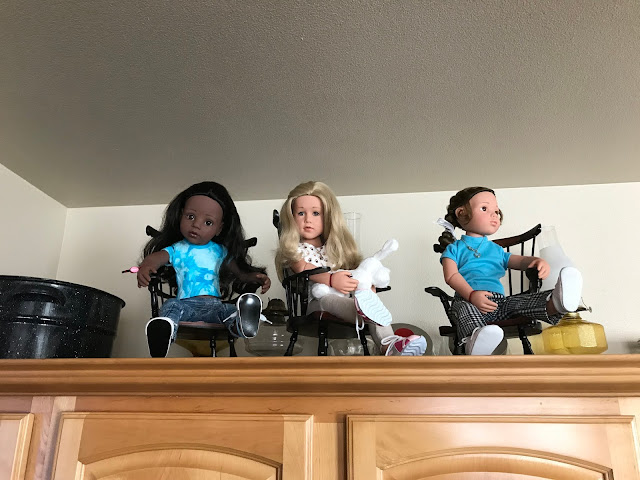 I thought it would be fun for the boys to see if they could find them. It was. 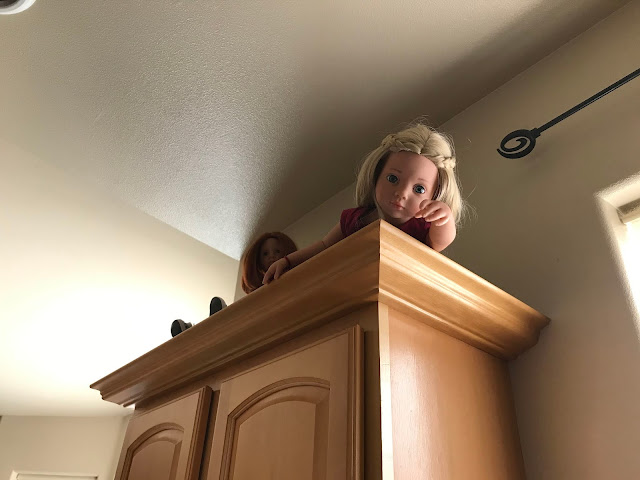 We knew cold weather was coming, with cold rain, freezing rain and possibly snow, so we spent Tuesday afternoon and early evening until it was too dark, trying to back our trailer into its winter berth in our backyard. It was very difficult, because we haven't had it paved yet. That will come in the spring, when they will level it and put in asphalt so we aren't driving on grass. That part of the yard slopes toward the hot tub, making it difficult to back up straight, as you can see from the angle of the trailer in relation to the pickup in this photo. 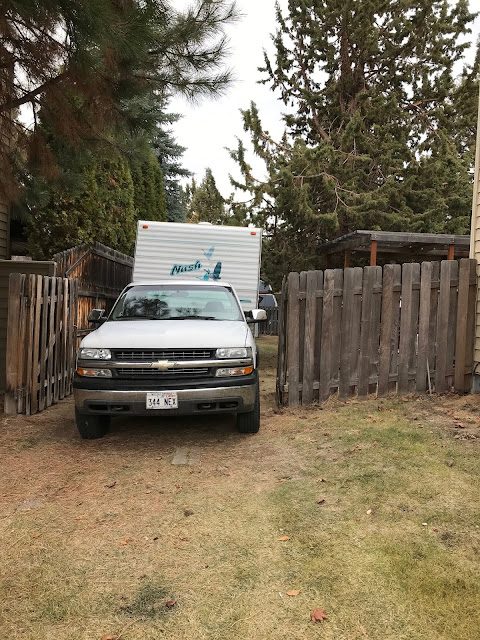 When it got too dark on Tuesday, we left the trailer with the tow vehicle attached in the side yard (at least off the street) for the night and started up again on Wednesday. It took a lot of back and forth, but we finally were successful. This is the new view from our back deck (and also the kitchen eating area). DH is planning to get a cover for it. I suggested a cover decorated with a painting of a forest. 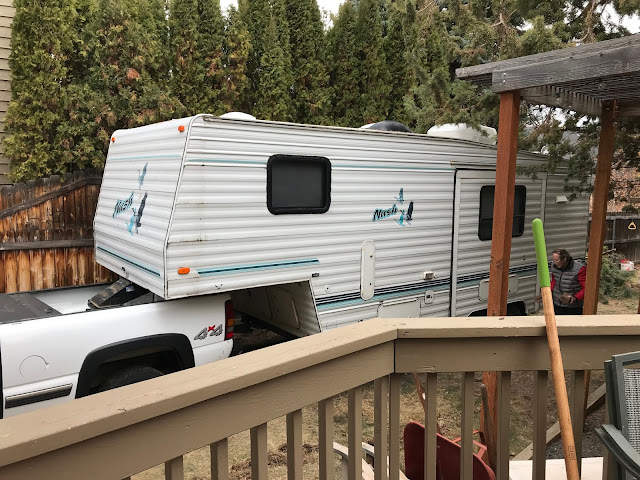 Even unimproved, the RV parking was one of the mandatory features we had to have that narrowed our selection down to this one house, in spite of its need for repairs.

DH's brother was coming for Thanksgiving, followed by DS2 and DDIL2 and the two boys on Friday, so I did a lot of cooking on Wednesday. I baked two loaves of pulla, a Finnish family specialty. I have a recipe that I can make in the bread machine, although I don't use the machine to bake it, of course. One loaf was for DH's brother, who grew up having this when company came. 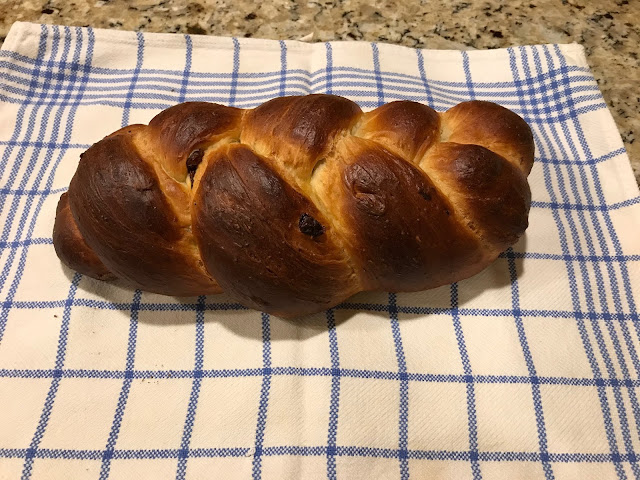 I also baked some sweet potatoes to slice up for a casserole, with the vegetable served au naturel other than some Smart Balance, a little maple syrup and a light sprinkle of cinnamon. I needed the sweet potato for a yellow vegetable, because my DBIL doesn't like the real star attraction, Lanttulaatikko, or rutabaga casserole, in spite of the fact that his mother served it every Thanksgiving and Christmas. I made the stuffing Wednesday night.

On Thanksgiving Day, I cooked the turkey breast with turkey gravy for the two men and a Quorn Turk'y Roast with mushroom gravy for myself. We also had roasted asparagus and cranberry sauce (from Whole Foods). The first course was a salad kit from Trader Joe's, Veggies & Greens, made up of chopped broccoli, shaved cauliflower, shaved Brussels sprouts, radicchio, kale and green cabbage. It's easy. Just dump in into a bowl, add the honey-ginger dressing and top with the extras: dried pear crumbles and pistachios.

This is what my plate looked like before I added the asparagus and cranberry sauce to it. 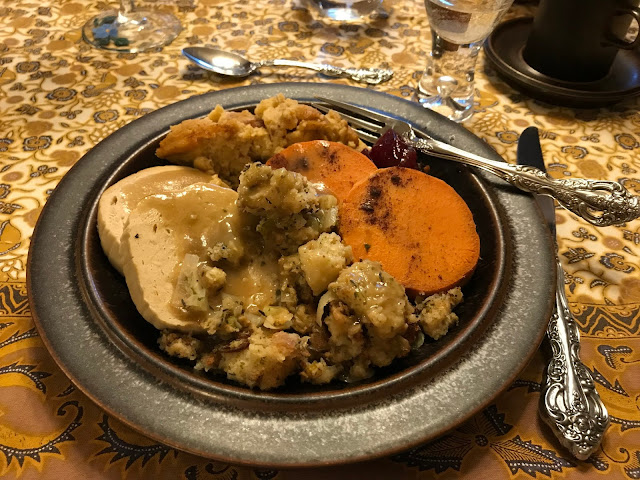 Dessert was a pumpkin pie from Whole Foods with vanilla ice cream. Cooking was a challenge with an oven that doesn't keep a constant temperature. I had to use a flashlight to keep checking the oven thermometer.

DH went out on Friday morning to buy a new TV to fit the much larger space over our fireplace. (You knew he would, didn't you?) He also picked up a replacement for this gem: 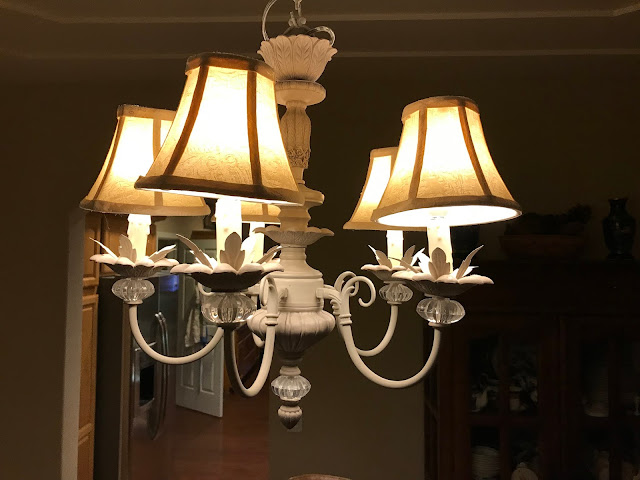 It was full of dust (and one spider) when I was cleaning, and that was after DH cleaned it. It's way too ornate for us as well. This one will go into the Redmond Online Yard Sale group on Facebook.

Our younger son and his family arrived after a slow trip down from Beaverton. There was snow at the passes, but they made it before it was totally dark. They brought us this rubber plant to replace the one we left at our church in Park City. It now hides the trailer from view, at least a bit. 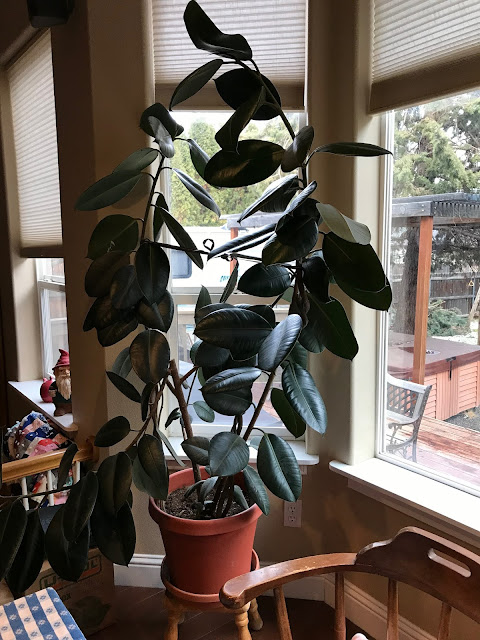 The boys wake up very early, and it was still dark when I let Dusty out Saturday morning. Our back deck looked like this. 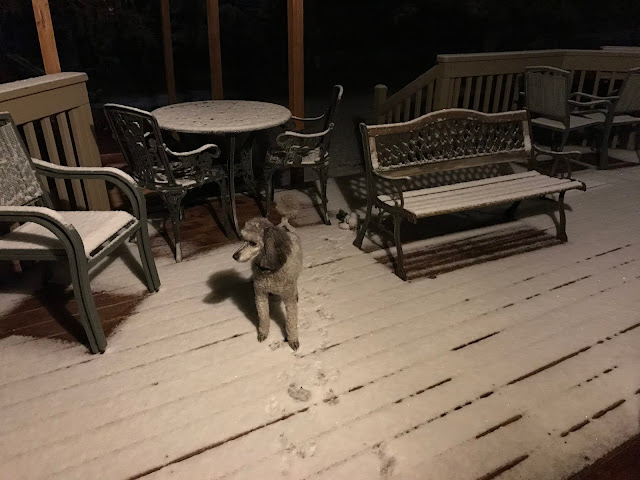 Later on Saturday, the ladies and pups accompanied the boys on a short walk to this playground next to the Bend Senior Center, close to our house. They burned a few calories playing on the equipment, which was coated with snow. 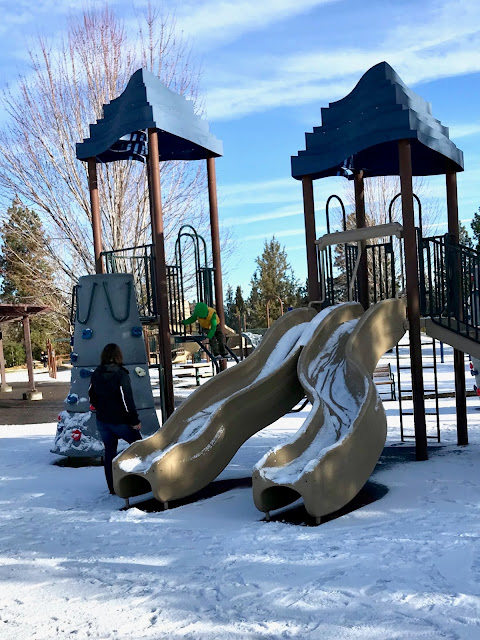 While we were out at the playground, DH and DS were busy trying to put together my sewing table. It was probably a good thing were out, because I take it that there was a lot of cursing. They found the directions very confusing and some of the holes drilled in the wrong place. DH is going to have to drill a new hole for the right front caster, so the doors will slide into the slot, because the screw blocks the way. On top of that, the sewing machine sits too low in the table. the airlift for it can be adjusted so it will be flat, but we can't figure out how to do it, and the demo on the website is for another kind of airlift. 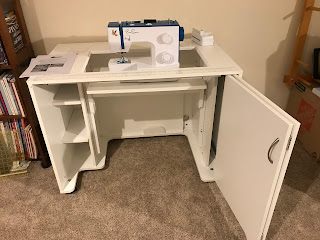 On the bright side, the acrylic insert that makes a flat surface around the sewing machine actually fits the machine I ordered it for.

I will have to call the company today. It's a very expensive table. The support should be better. I hope we can get these problems worked out.

The boys spent a lot of time in the backyard playing on the play set, which their parents decided was suitable, except for the rope, which needs replacing. They also threw the ball for Dusty and Rocky, who really appreciated it.

For dinner Saturday night, we had salmon, zucchini sautéed with onions and mushrooms, another nice Trader Joe's salad (this time their Broccoli & Kale Slaw) and this gem, which the kids brought. 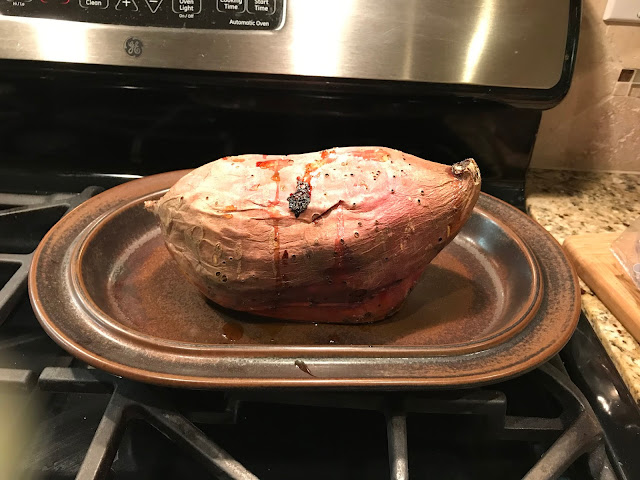 This baby weighed five pounds. They named it Herman. DH carved it like a turkey. I thought it looked like a piglet. 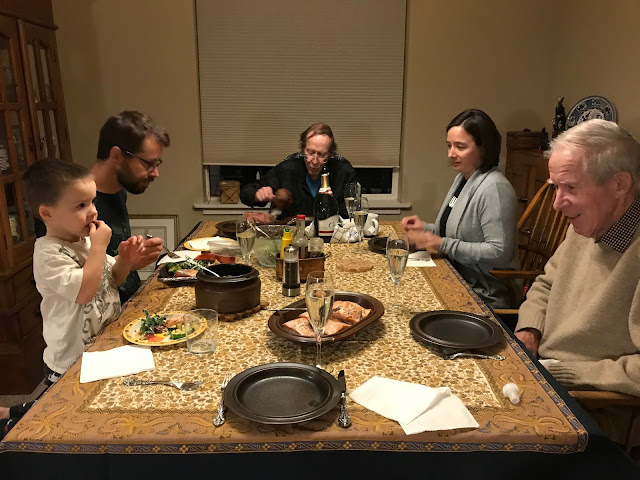 Johan had had a nap, so he joined us for dinner, but Soren doesn't nap anymore. He crashed early and missed the meal.

Saturday night, DH and DS put the new chandelier for the dining room together and Sunday morning they installed it before they left to return home. 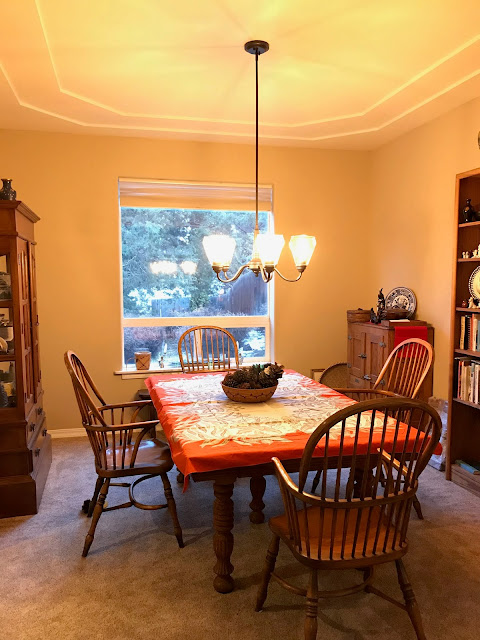 The old one will be appreciated by someone, I'm sure, and this one was a sale item, so a big discount.

The kids made it home safely, taking the Elna that had belonged to my sister-in-law and the clock they want to fix and use. We have a lot of antique clocks, and we had planned to sell this one and the sewing machine and its cabinet. DDIL2 saw them listed and asked to buy them. I told her she could have them. I had the Elna serviced, so we brought them with us. We'll get the cabinet for the sewing machine to them on some future trip.

Another thing I managed to accomplish this week was Billy's preliminary haircut. As soon as I had Friday's story written, which required his original hair, I got out the scissors and had a go, leaving it still rather long, at least until my hairdresser can advise me. Then I put what was left of his rooted hair in curlers so the long hair would look a little fuller and shorter. Here he is with a hat. 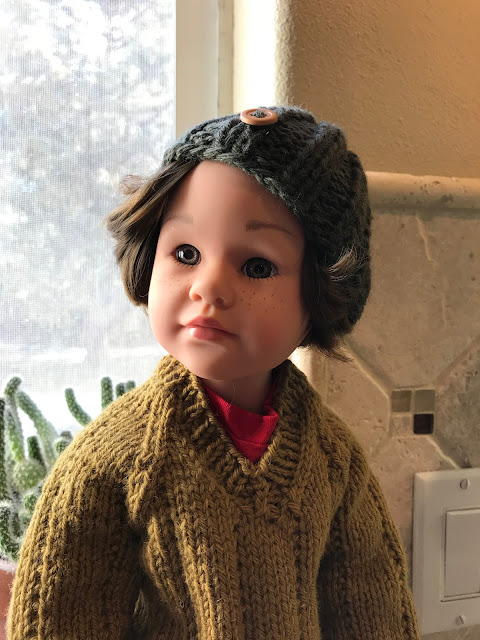 This is without the hat. 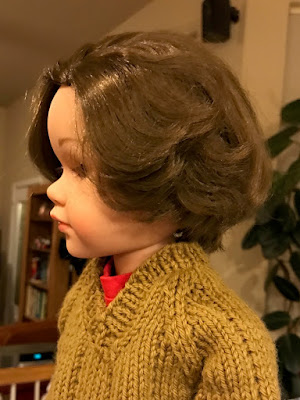 Billy's new shoes, ordered from FairyTaleLOVEit on Etsy. They came from the Ukraine, so it took a long time to arrive, and they were very expensive, but they are beautifully made, and I think they are perfect for Billy. 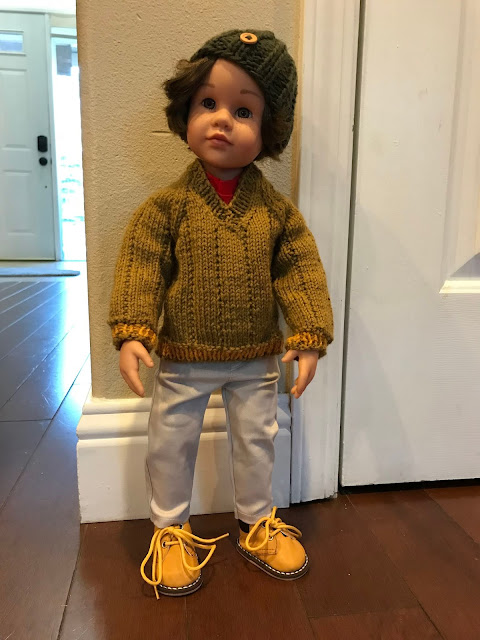 The other two younger grandkids were playing a hedgehog and a snail in Ballet La Crosse's production of Alice in Wonderland over the weekend.

Rocky's thyroid and blood-pressure check showed his medication is appropriate for him. We're happy the old guy is doing well. We like the new vet.

What's on my needles: Back to the Kisu Takki Cardigan based on the Stavanger, but with a cat theme. Just finished the body and ready to CO the sleeves, planning on working them together in the round with steeks between them, as I did for the Stavanger.

What's on my Sparrow 15: Still sitting in my future sewing room, but out of its box.

What's in The Doll's Storybook: It's a Boy! Billy arrives and meets the girls. I'm working on the story for this week now.

What's on my iPad/iPhone: Still The Ladies of Ivy Cottage by Julie Klassen. No listening time this week.

What's my tip of the week: A "soaking tub" is a good place to store pictures and artwork while you're finding a place to put them on the wall.

This week, Billy discovers that he needs a new goal. Next week the dolls celebrate Hanukkah with Charlotte.

We got the sewing cabinet put together. Photos Monday.

Love reading your posts every week.  Glad you are settling in to your new home.  The doll stories are great too.  Can't wait to read what they will do next.