Back to this quilt: 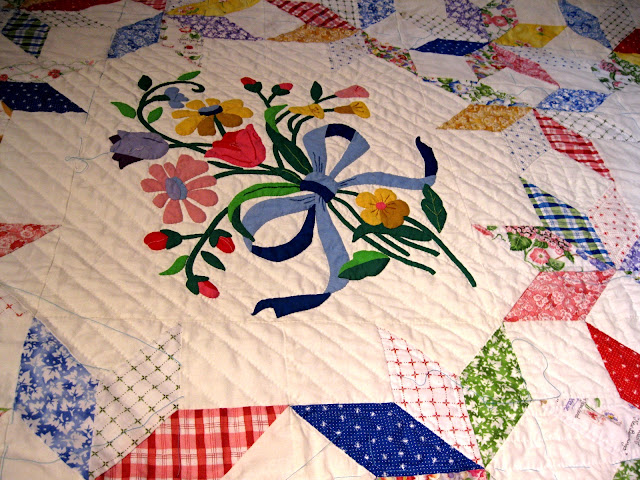 I've been working on this quilt for years. I hope to finish it before we move.

Here's the story behind this quilt. When we were living in Texas the last time (1998-2000), newly returned from five years in Indonesia, I was watching reruns of "Simply Quilts" with Alex Anderson on HGTV, which I had missed during my time out of the country. This design and the fabrics were featured in an episode (but without the appliqué). A quilting friend who had also just moved to the Houston area from Indonesia, and who also fell in love with this design wanted to make this quilt too. She and I set about trying to find the fabrics, "The Language of Flowers" by Susan Branch. They were not available in the local quilt stores anymore. Searching online wasn't the wonderful (and time-consuming) option it is today. I was able to find out from the HGTV show that the fabric was made by Springs Industries. We wrote them (yes, snail mail) and found out they did still have the fabrics and could sell it in 1-yard pieces. The two of us each ordered half of them and we split them between us.

I decided I wanted to fill the big empty why spaces with appliqué, a technique that I was hoping to learn. I copied the design from a quilt I found in American Quilt Classics by Patricia Cox, page 58. It was a quilt kit from the 1930s. The appliqué motifs were in the corners. I photocopied the picture of the appliqué, blew it up to the size I wanted, and set about making four of them. That part actually went pretty fast. Not wanting to ruin my fabrics, I began experimenting different ways to make the Lemoyne Star blocks and partial blocks. I finally gave up trying to sew them by machine. I bought a Jinny Beyer book on hand piecing and began sewing them together by hand. Having started by hand, I decided to sew the borders on by hand, too. I'm hand-quilting, and I plan to sew the binding on by hand. (Yes, call me crazy.) I have to say that I have definitely had my money's worth of fun from the cost of the materials.

I was working on hand-quilting this quilt when Vintage Stitchers met at my house.

I decided to host Vintage Stitchers this time so they could go through the quilting books I wanted to give away and see if there were any they would like to take. I started out with three boxes, and now I have two (not quite full) boxes.

You may remember this quilt of Marilyn's. She was planning to drop it off at Quilts on the Corner after our last meeting. 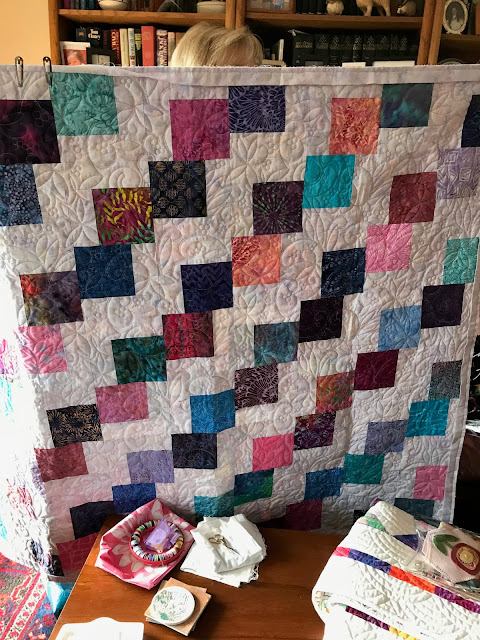 This store is a favorite place to have quilts quilted for the Vintage Stitchers ladies. Here's the back: 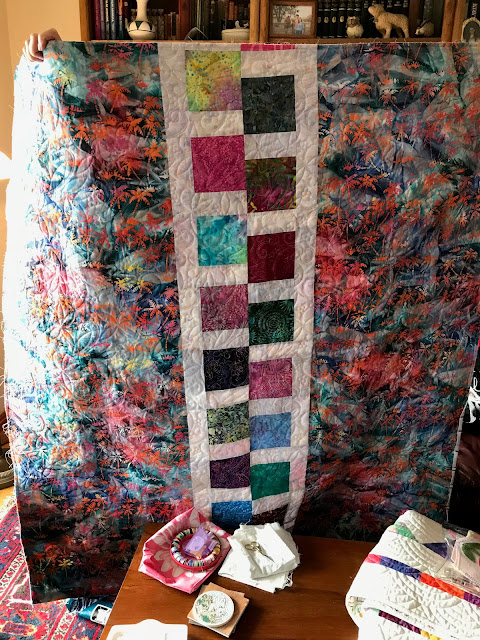 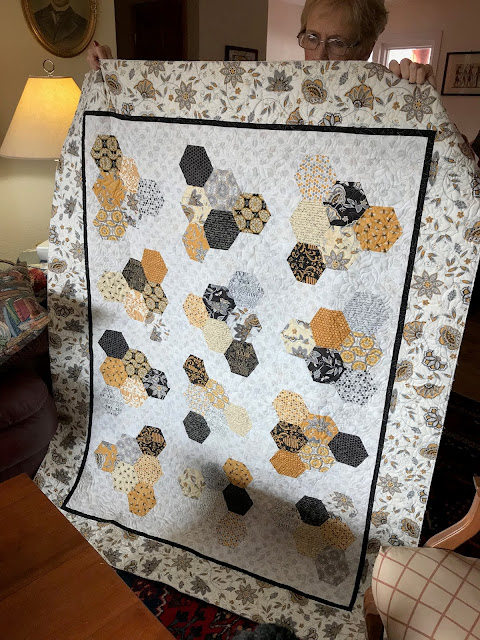 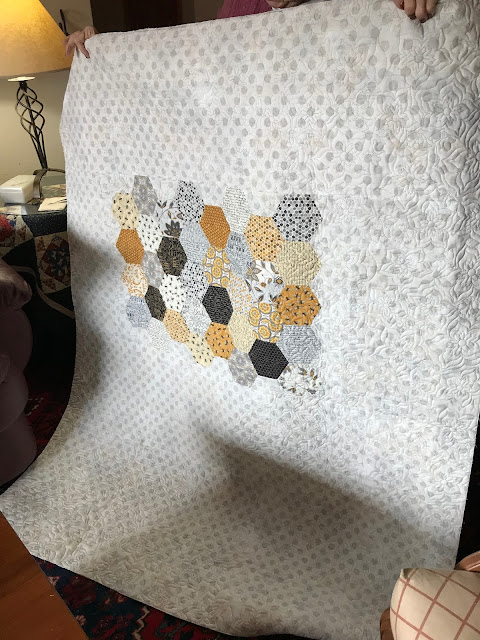 She used the special hexagon ruler from Missouri Star Quilt Company. It makes half-hexagons that can be sewn with the background fabrics and other hexagons using one straight seam. Barbara matched up the strips with the same fabrics so you don't notice that they were sewn in two pieces.

I served the ladies some products from Flourish Bakery. I had picked up some at my church on Sunday. One of our priests was a baker in her previous life and runs the Flourish Bakery project. 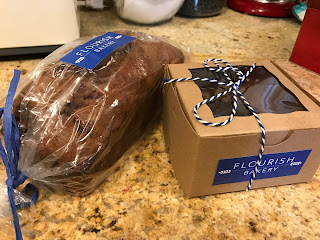 It's a training program for people who are recovering from substance abuse or have been incarcerated. Fifteen students spend a year in the program learning how to run their own bakery business. Then they receive mentoring and support when they go off on their own, either to work for another bakery or to start and manage their own business. If you would like to help, you can donate on their website. If you're in the Salt Lake City area, you can order baked goods from them.

The girls thought the little pie should have been for them. (I can't begin to tell you how decadent the chocolate-toffee pie was!) 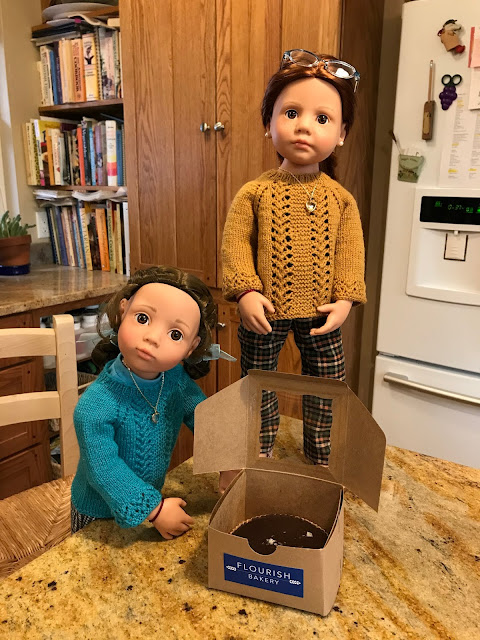 I stopped by the rummage table to donate on Sunday, because the diocese was matching anything we could raise for missions on Super Bowl Sunday. I found this. 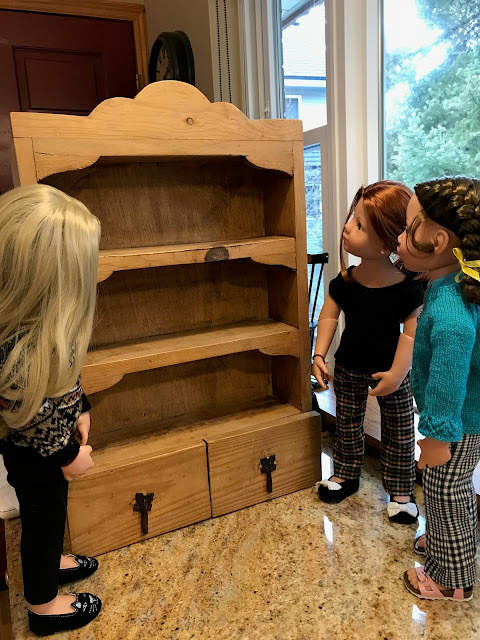 It was a hit with the girls. (I paid more than they were asking for it, because I had planned to donate anyway, and it was so cheap.) You will see this item again.

Speaking of the girls, Mandy and Lotte each wanted a Steampunk Blouse pullover like Vroni's. I didn't have any T-shirts the right color, and I don't like making them wear something will holes over their bare skin, so I made them each a camisole to wear underneath. 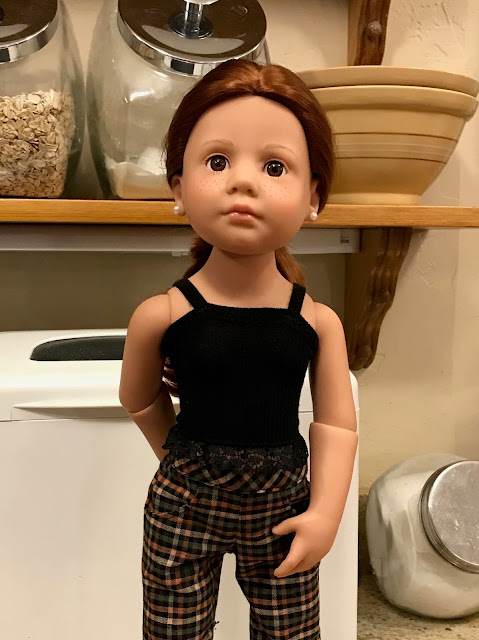 I cut a girls’ sock 1/4″ below the cuff, turned it under and zigzagged it, then attached straps I made from the soft side of Velcro (5/8″ cut in half lengthwise) to the front and sewed little squares of the Velcro with the hooks in the back. No back closure, Mandy just stepped into it and pulled it up. It was really easy. I don’t know what size girls’ sock I used, but the foot was 7 3/4”or 19 3/4 cm long. Here's Lotte wearing hers, along with her new slacks from the same pattern I developed for Vroni and used for Mandy. 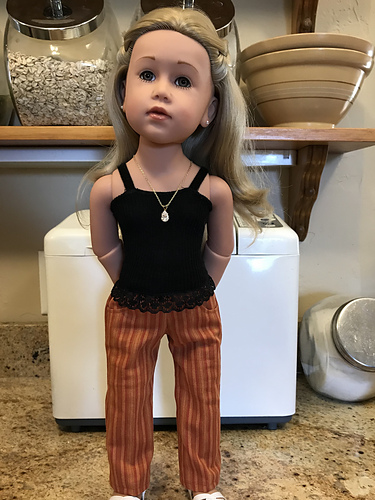 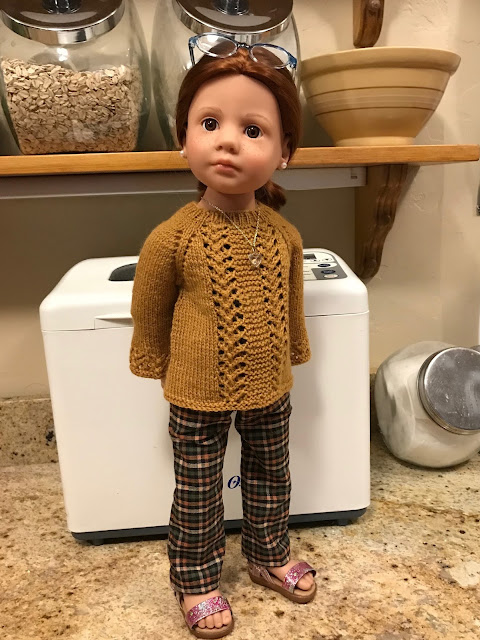 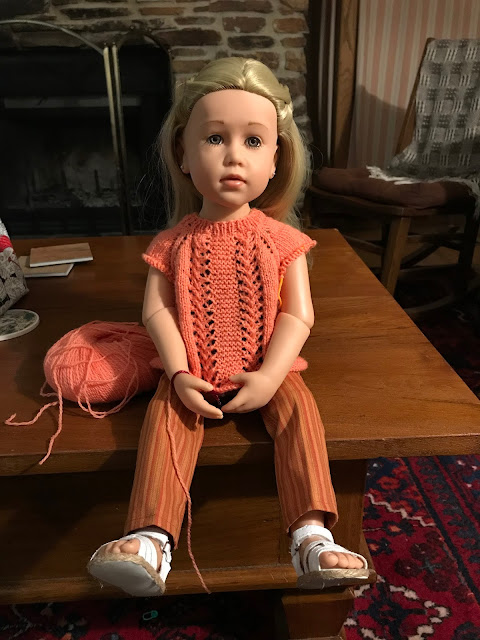 (Mandy and Lotte are Götz Happy Kidz, and Vroni is a Classic Kidz.)

And speaking of Vroni, she tells me to wish everyone a happy Valentine's Day, and please help yourself to one of her chocolates (but watch out for the pins). 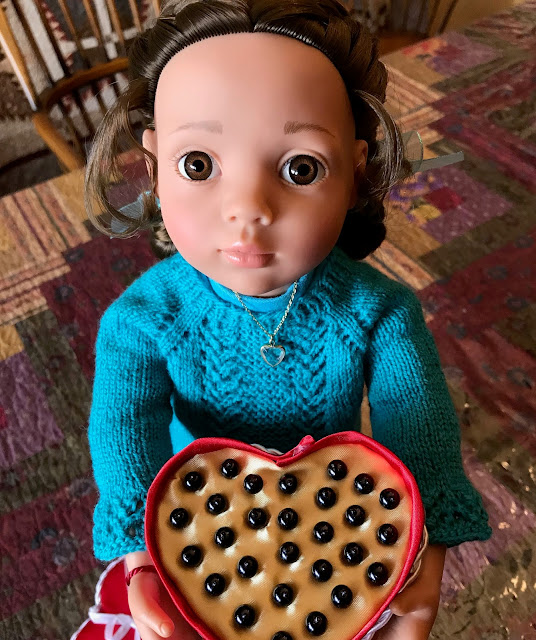 In other news, the lady who used my steeked Fair Isle doll sweater as her first steeking project is making another one in different colors.

What's on my Featherweight: More pants and skirts for the girls.

What's in my hoop: My hand-pieced "Spring Flowers" quilt.

What's on my wheel: Stanzi is still awaiting her next task. I hope to spin as part of the Ravellinic Games on Ravelry.

What's on my iPad/iPhone: Finished Murder on Black Swan Lane by Andrea Penrose. It was excellent. Very visual, artistic language and interesting science (of the time) background. Now listening to Agatha Raisin and the Vicious Vet by M. C. Beaton.

What's my tip of the week: If you need to keep seams from coming apart, but you don’t want to backstitch, try this simple tip: At the beginning of the seam come onto the fabric at a right angle to where you want the seam to be, or at the end of the seam make a right angle turn off the seam allowance. However, when I sew a seam that won't be covered by another seam (such as a border piece on a quilt), I do backstitch. Unless I'm piecing by hand, ha-ha! Then the normal tying off works just fine.

They are just toy calls.  The tall one is a walking doll and the other one is just a little doll that I knit a baby outfit for.  I would love to have your dolls.

This afternoon, I am on my way to Dom. Rep. for one week.  I will check in again when I return.

Very cute, Muriel! What kind of dolls are they? Peggy, here are a couple of outfits that I knit for my dolls. Muriel, I would love to see.

I love those dolls Peggy.  I have a walking doll and I knit a red cardigan and made a pair of jeans and put the doll into the outfit.  I will take a pic of it to show you all.

Thanks, everyone, and happy Valentine's Day!

WOW for the applique quilt!  and I sure enjoyed your story and the girls' and all their fine gear

Beautiful quilt, made even better by the story that goes with it.  Nice find with the doll furniture.  Those dolls are certainly fashionistas!

We don't know, Barbara. We can't really show our house here until the snow is gone. It's impossible to move before summer anyway.

Your project is beautiful. How much time remains before your move?