We finally got the rail up between the kitchen eating area and the family room. 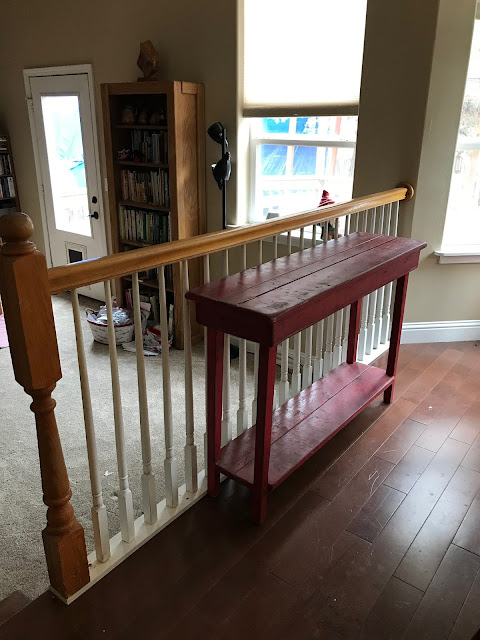 Some previous inhabitant had taken it out when the wood floor was laid down, and the rail was never put back. There's a drop from the eating area to the sunken family room, so it was dangerous.  We hired a handyman to do the work. He also installed a rail around the back deck, another place where there was an accident waiting to happen. It still needs painting. We were getting some rain, and he had to work it in while it was dry. So we have it covered up with a tarp. Of course, on Sunday, when I took this photo, it wasn't raining. It was quite nice. 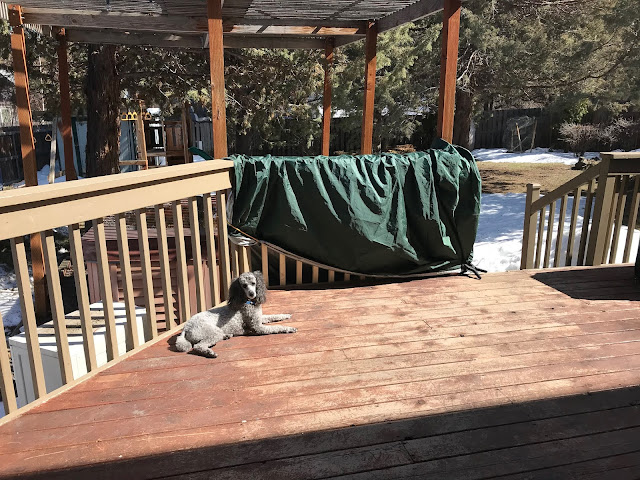 You can see that Dusty is enjoying the sunshine and the warmer temperatures.

I'm working to get Alister ready to go to his new home in early April. I started with a sweater for him using the same pattern as the one I did the previous week for Billy. It's the 42 Shawl Neck Sweater & Cap pattern by Jacqueline Gibb, only I haven't made the hat. 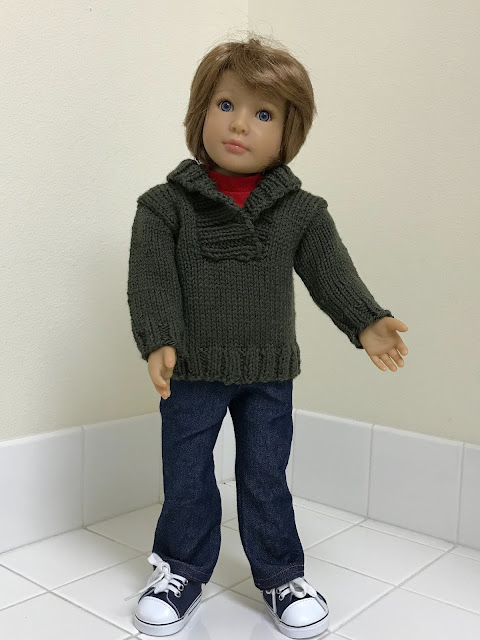 I made it the way I did Billy's, but with different yarn, and I made the collar all in one piece, using dpns to handle the curve, even though the collar is knit back and forth. 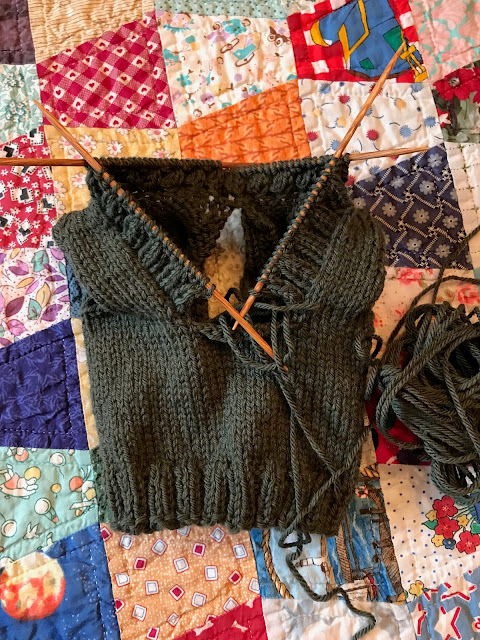 The pattern calls for working each side separately and then sewing the collar together at the back neck. The back is open from the neck down to allow doll's dresser (or valet?) to get the arms into the sleeves easily. Then it closes with buttons. 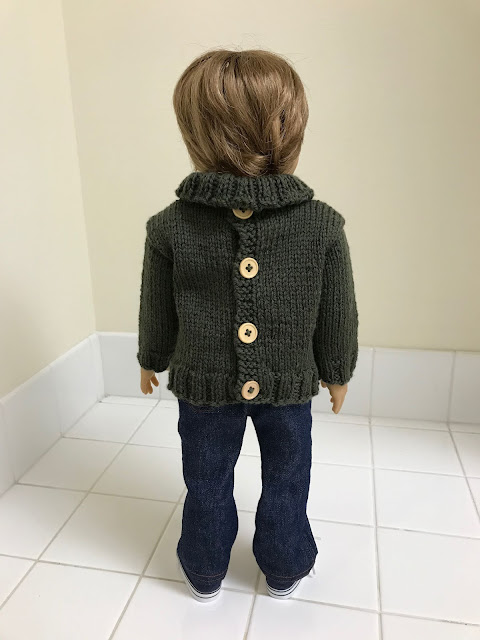 Saturday I made Alister a shirt. I plan to make some casual pants to go with the shirt, which is batik from Connecting Threads. (I don't know if they still have this fabric. It has been some time since I bought it. They do still carry batik fabrics, though.) 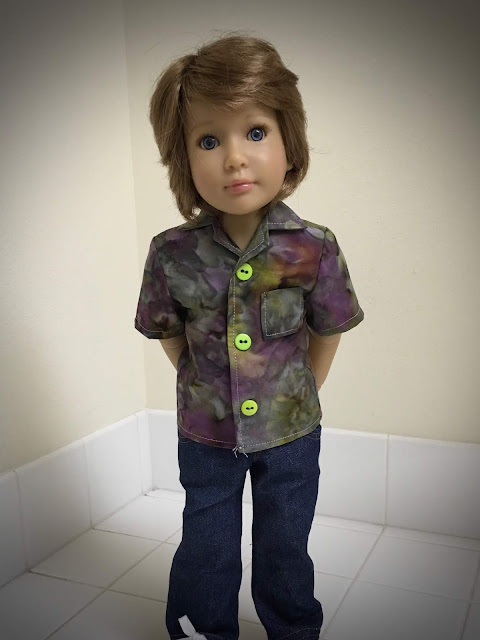 The shirt was a chore to make. The pattern pieces didn't fit together very well, and I ended up redrafting them. Here's the back. 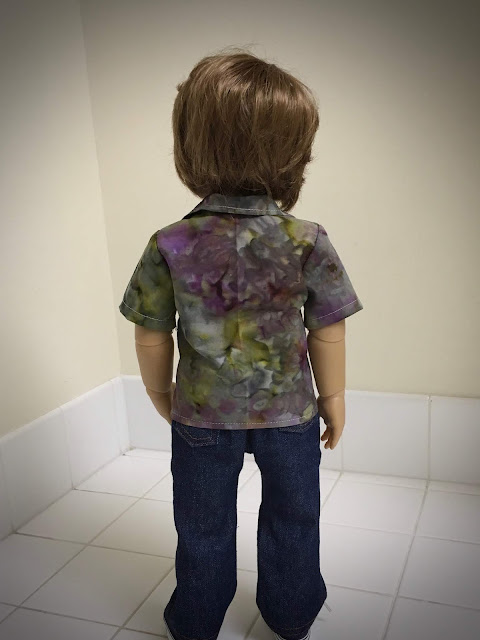 Alister is a Kidz n Cats doll. They have recently stopped producing them, but some of them are still available new.

The pups had their monthly grooming appointment, followed by the usual post-grooming stupor. (Dusty is really getting silver.) 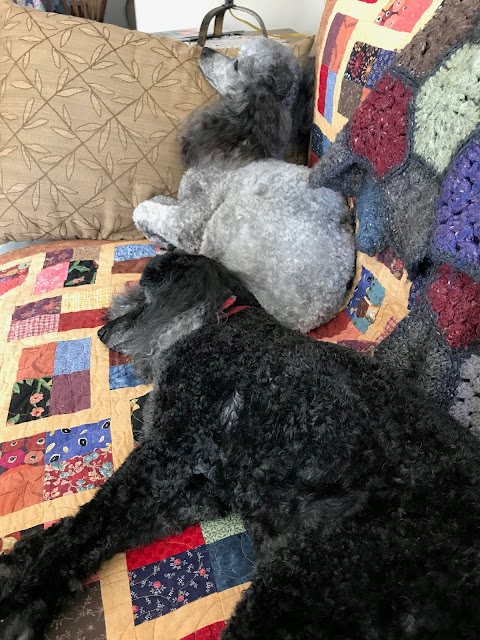 They are still soft and velvety.

The weather has been cold and rainy, but we managed to get in a few walks. Here's the one we did on Saturday, just on the streets around our neighborhood to avoid getting the clean pups in the mud. 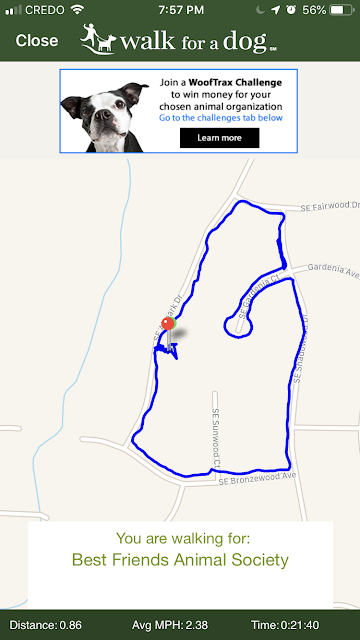 I made my "Spotted Angel" for supper Friday. 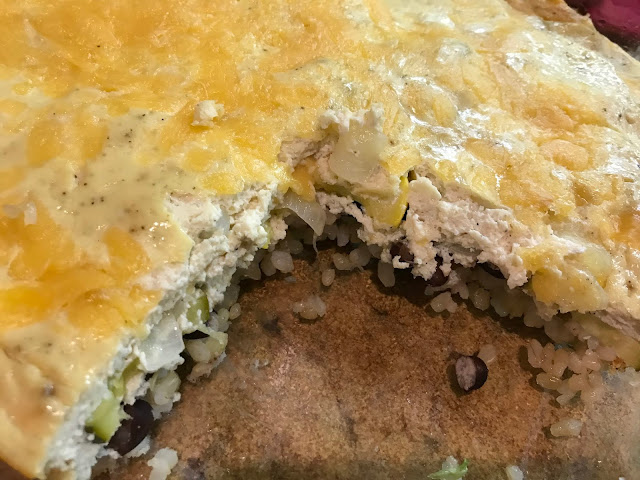 It's made with rown rice, black beans, onions, 1 zucchini, 1 yellow squash, yoghurt, silken tofu, cheese, eggs, salt and pepper, quick and easy. Just layer the rice, beans and vegetables in an oblong pan, sprinkle some cheese on top of that, then run the other ingredients in the blender and pour over everything. I added more cheese on top. Sometimes I use bread crumbs.

I had a doctor's appointment, a visit to the dentist and a haircut during the week, and those things cut into the play time, but I managed to get this week's story written and the photos taken.

What's on my needles: Still the Coastal Skies Shawl, finished a sweater for Alister.

What's on my sewing machine: Clothes for Alister.

What's in my hoop: Still the Spring Flowers quilt. I was hoping to work on it this week, but life got in the way. Now I need to finish getting Alister's clothes ready, so I can ship him off.

What's in The Doll's Storybook: Need a Hobby? We have a variety to choose from.

What's on my iPad/iPhone: Finished The Four Graces by D. E. Stevenson. Then listened to Frankenstein: Prodigal Son by Dean Koontz. Now listening to the next in the series, City of Night. I may just go right through. I listened to the entire series a few years ago, but with big gaps between them. It's nice to keep the continuity, and it has been a while.

What's in my wine glass: Cherry Blossom Pinot Noir 2016. Very nice, and not at all like cherry juice.

What's my tip of the week: If you buy those English cucumbers that come shrink-wrapped in plastic, they will keep longer if you remove all the plastic before storing. I like to wrap the unused portion of cucumber in paper towel and place in a plastic bag. The plastic is hard to remove. I usually just cut through the plastic to get the size piece I want. If I'm chopping the cucumber for salad or raita (Indian dish made with yoghurt), I slice the piece lengthwise before chopping. The plastic is easy to remove then. Getting the plastic off the piece I plan to store is more difficult, but worth the effort.

When we bought the house it wasn’t to code, Irene. This would never have passed inspection.

You have the best dressed "kids" You are a great mama to those boys and girls with all the knitting and sewing you do for them. I like the railing. It looks nice and you had a valid point about it keeps you from tripping going into your living room.  As we get older we have to be more careful about where we step.