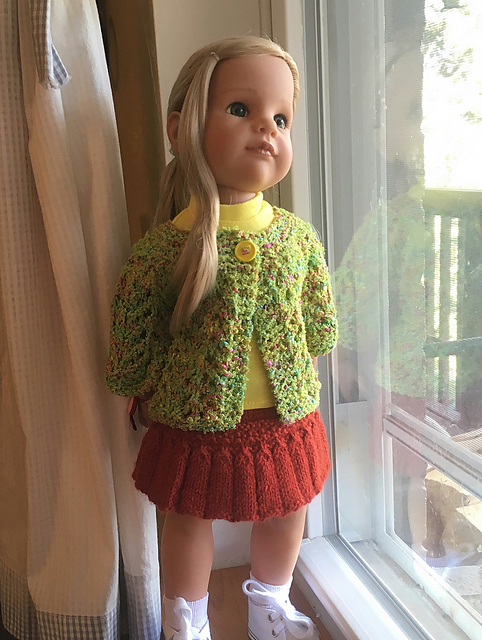 That's the T-shirt that didn't fit the boy twins, Buddy and Dude. I managed, in spite of an insane week, to get some knitting done for Hannah. As part of the KAL in two of the doll groups on Ravelry, I've been knitting clothes in fall colors for back-to-school outfits for the dolls we're giving as Christmas presents to the grandkids this year. The skirt is from Jacqueline Gibb's Girly Tank Top Set for 18inch Dolls, which I made for Daphne Jr. The jacket is the February Doll Sweater, based on Elizabeth Zimmermann's February Ladies Sweater. The doll version is really for a smaller doll, but someone had made it in heavier yarn for an 18" doll, so that's what I did. I'm happy with the result, but I wasn't crazy about working with the yarn. It split, frizzed, caught on my fingernails and made it hard to see what I was doing. 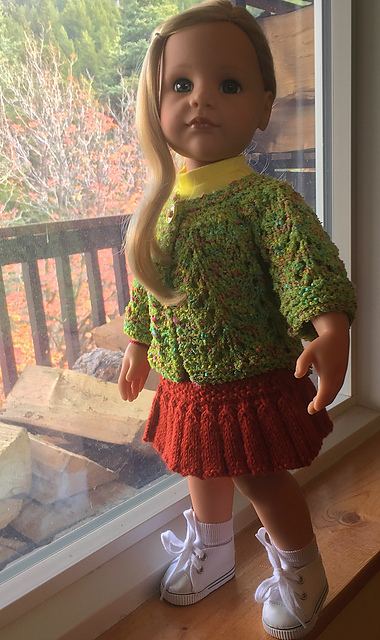 Speaking of fall colors, I'm glad I snapped this photo of the maple tree in our yard before the heavy rains came, this one a fine example. The leaves are now on the ground. 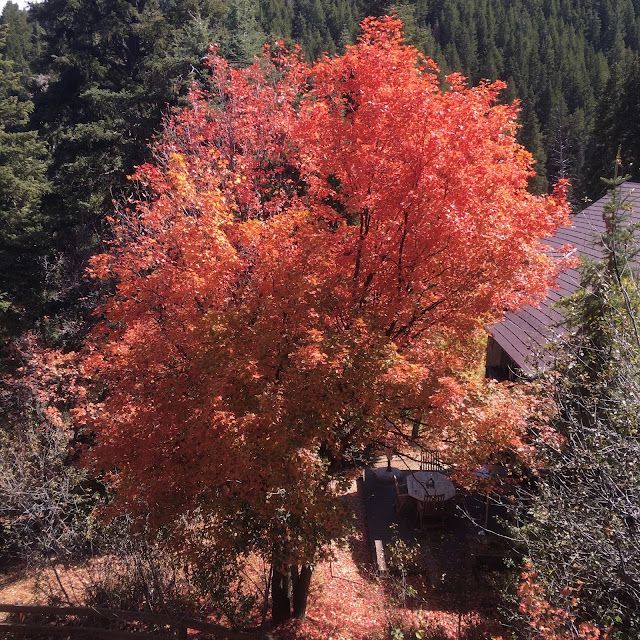 Leaves aren't all that have been falling this week. Daphne lost her first baby tooth and wrote this note to the tooth fairy. I guess she has decided to keep her first lost tooth. 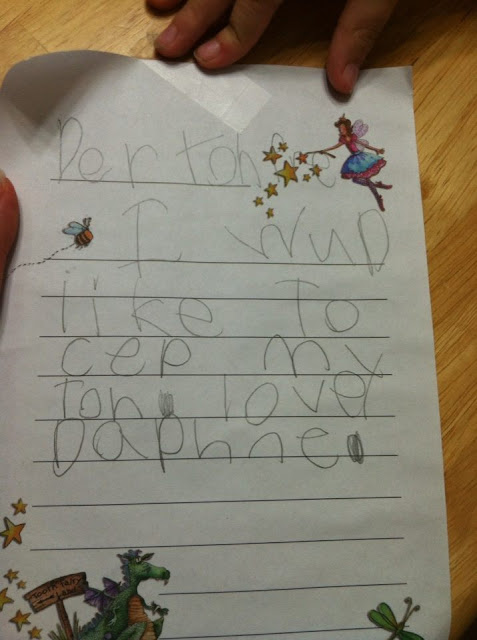 Dusty has been losing baby teeth, too. This was one we managed to find. We're wondering what the tooth fairy will bring him...besides permanent teeth, that is. 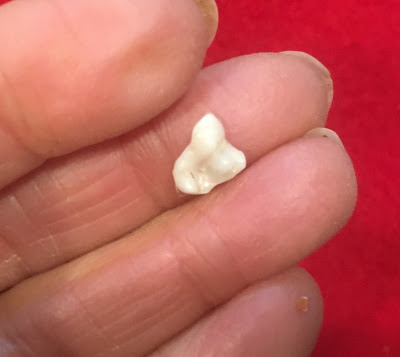 Fall weather usually means mud in these parts. We thought we might get some snow, but all we got were heavy rains. I shouldn't have washed my kitchen floor. This is what my back door looks like. 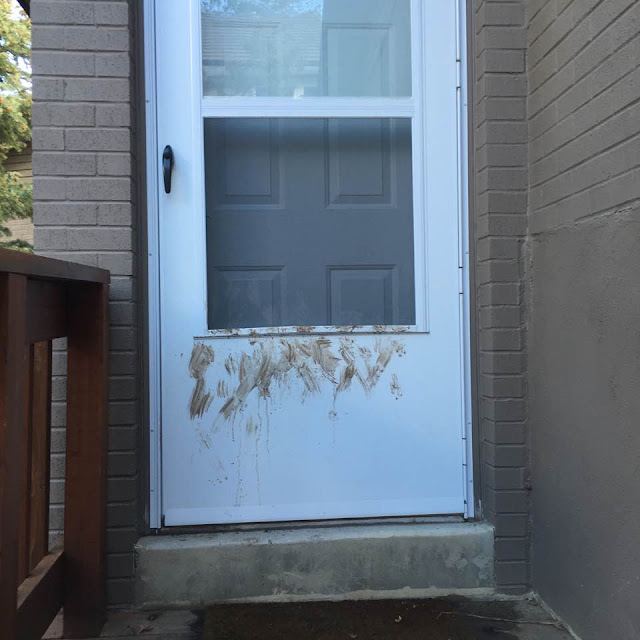 Dusty doesn't know what to think about the cold rain. He was born in southern Nevada the beginning of May, and the coldest he has been was in air conditioning. For several days, he came in soaking wet. 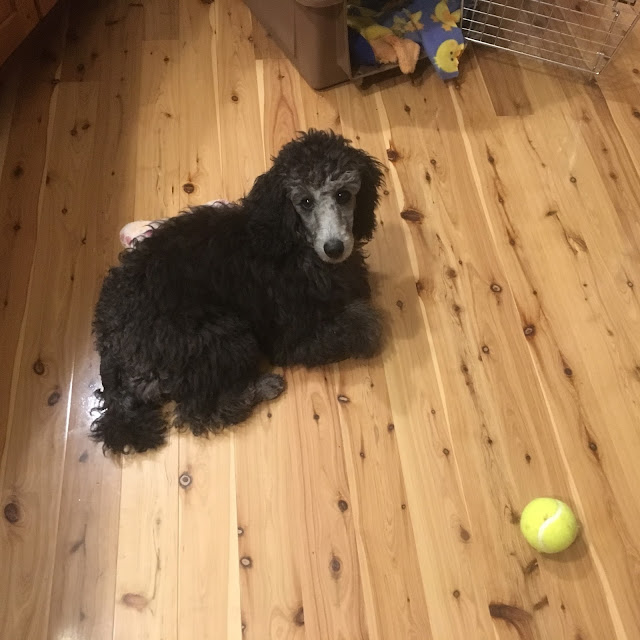 When it's warm enough, he has been carrying on an archeological dig in our backyard. Here are some of the relics he has unearthed. He also found a dog's tie-out line. None of this stuff came from us during our 13 years in this house. I sense a story in each item. 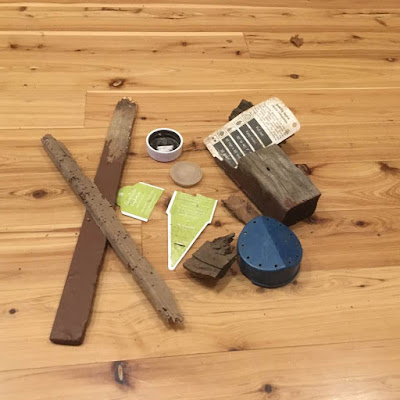 Leaves and teeth fall...and pups can, too. Rocky took a tumble last Sunday night when he changed his mind about climbing up onto our bed using the new dog stairs we bought for the pups. He jumped while he was turning and landed on the hardwood floor, slipping and dislocating his hip. Monday afternoon, the vet was doing X-rays, and it popped back in. She says he will be prone to dislocation, but the chances of avoiding surgery are better if we can keep his quiet for two weeks. No walks, no climbing on furniture, no playing with Dusty. The first 24 hours are the most dangerous. We are almost at a week now, and we're doing OK, but it hasn't been easy. First we kept Rocky in the play yard. Then we learned that he could walk pretty well on the deck, so we switched the pups and put Dusty in the play yard and let Rocky have the run of the deck, as they were used to. 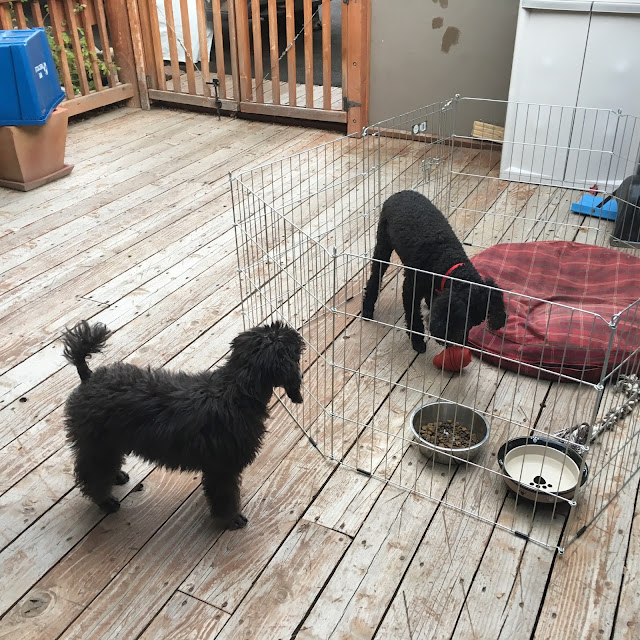 We have our fingers crossed that it will do the trick.

With all the rain falling, they had to stay indoors a lot. We ended up having to watch Rocky in the living room and let Dusty fend for himself in the kitchen.

Dusty, in the meantime, is still gaining weight. He is now over 14 lbs., more than half Rocky's weight.

Vintage Stitchers was cancelled this week.

What's on my needles: A dress for Hannah. The “So-not-my-palette Cardigan” is still on hold while I work on doll clothes. Still waiting for the second sleeve.

What's on my Featherweight: Doll clothes. No sewing this week because it's hard to sew and watch the pups at the same time.

What's my tip of the week: If you need to know how much yarn a project took, you can weigh what you have left and subtract from what you had to start with, or you can weigh the completed project, before adding buttons and other items, adding the tails you cut off to the project on the scale. This is especially useful if you want to make another of the same thing with the same material and want to know if you have enough yarn.

I love the doll's sweater.  I hope Rocky is back to normal now. It's terrible when one of our furry children is ailing.

Barb, doll clothes are perfect for learning. You get to do different thinks for a short time. There's a sampler you can knit, but when you're done, it isn't useful for anything much.

Jodi, he's doing well. Sorry about no quilting this week. Circumstances got in the way, but that means there will be more next time.

Always good to see what you are up to. Thanks for posting. Hope Rocky gets all better soon.

Lovin' those knit doll clothes!  My SIS has recognized how lame I am at knitting, and is helping me out by knitting a few dresses for my DGD's Christmas doll.