Let's start at the end. 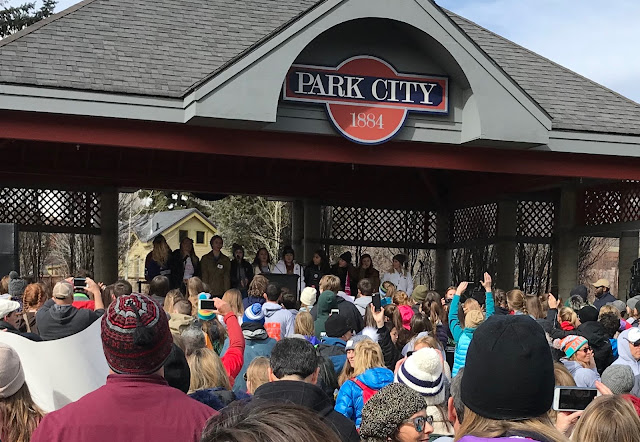 Dusty and I participated in the March For Our Lives in Park City on Saturday. I was amazed to find out that we had present at our little march three of the survivors of the massacre at Marjory Stoneman Douglas High School in Parkland, Florida on February 14th. During the rally held at the end of the march, they stood hand-in-hand with the student organizers from Park City High School. 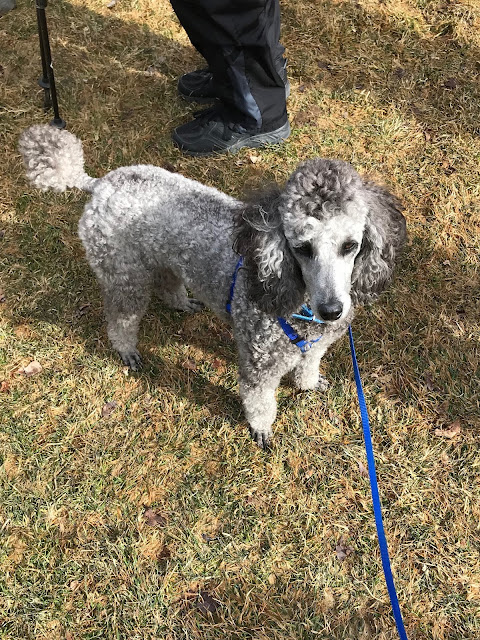 Dusty and I parked the car at The Market in Park City and walked up to the Wasatch Brew Pub at the top of Main St. to meet up with other members of my congregation at St. Luke's Episcopal Church and a lot of local people, including most of the students of the local high school. Dusty and I used the Walk for a Dog app to keep track of our outing. 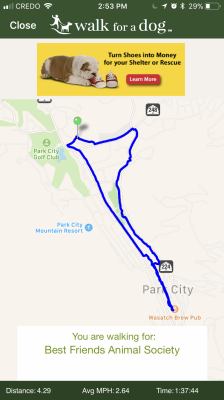 If you can read the fine print, you can see that we walked a total of more than four miles, counting the walk to the staging area, the march and the walk back to the car from the park where the rally was held. The estimated size of the march was 3,000, which was impressive, considering the size of our town. Salt Lake City had an estimated 7,000 participants. We were very impressed with the young people who organized the event and spoke to us. They did this all on their own. I have hope for our future.

Earlier in the week, Vintage Stitchers met at Rebecca's. She was working on this block from the Borboleta BOM quilt from Hat Creek Quilts. 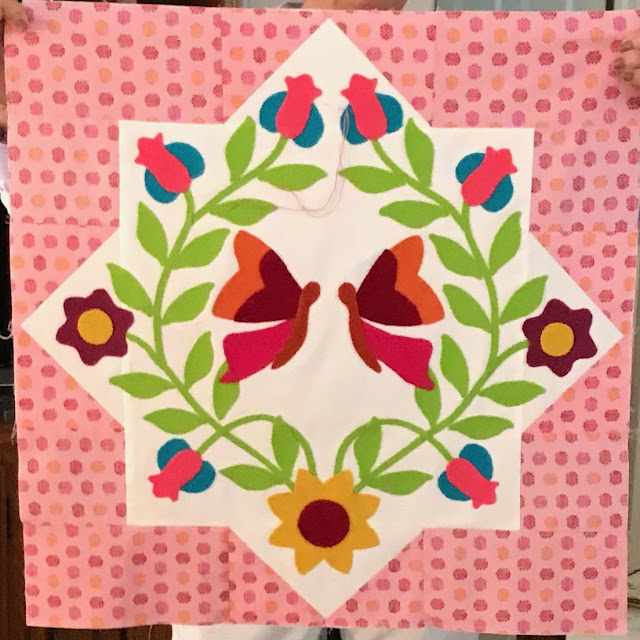 It uses washed woven wool fabric for the appliqué pieces, which enables more intricate designs than needleturn appliqué. Rebecca has the next one ready to go. 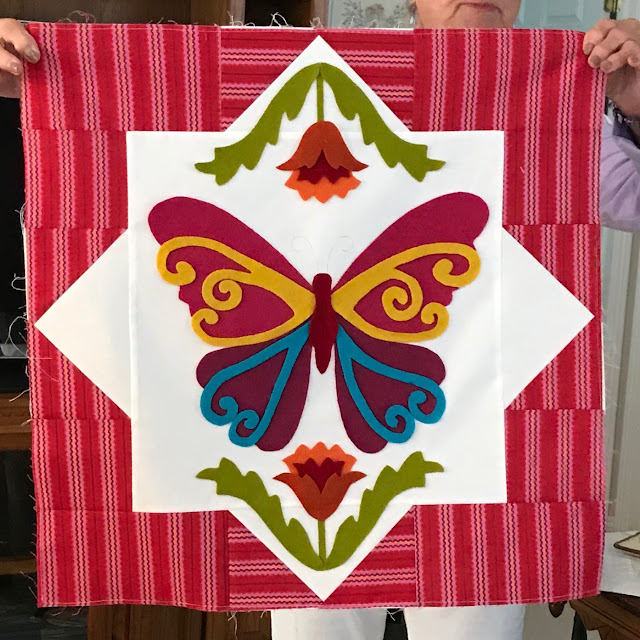 I believe she said she uses Roxanne's Glue Baste-it to attach the appliqué pieces. She is using a simple whip stitch to appliqué the pieces on.

Carol had a lot for show-and-tell. This quilt top started out as an attempt by Carol to make braid blocks, which she ended up cutting up to make blocks she liked better. 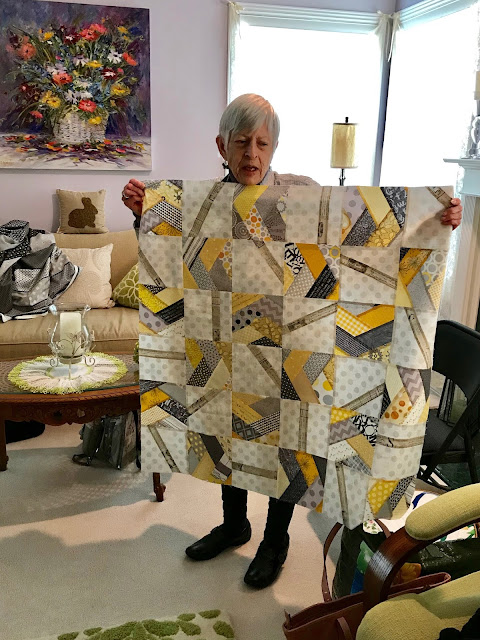 She showed us this fabric called "lollies." You can cut this up to sew together any way you want. (The fabric comes like this.) 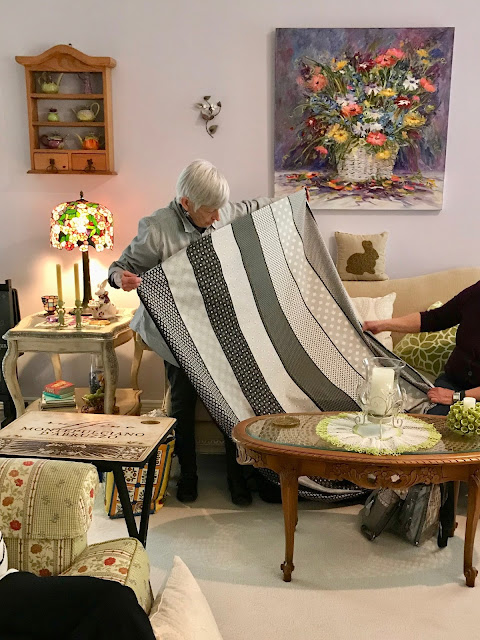 She also had this small piece we thought looked like an "I-spy" quilt for adults. 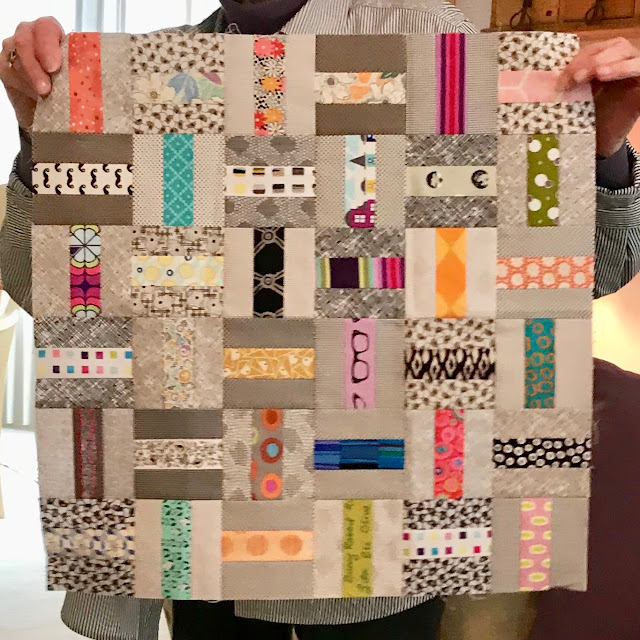 I was hand quilting during the meeting, but I've been sewing with some fabric I picked up from Rebecca the last time we met at her house. We often bring out boxes of fabric we don't think we need anymore to share with others, and I grabbed some nice small-scale fabric designs for doll clothes.

The Götz girls needed Easter dresses, and since I can't make any more quilts until after we move because of adding bulk to what we have to move, I had some sewing fun that doesn't produce something that takes up a whole box. This dress was for Lotte. 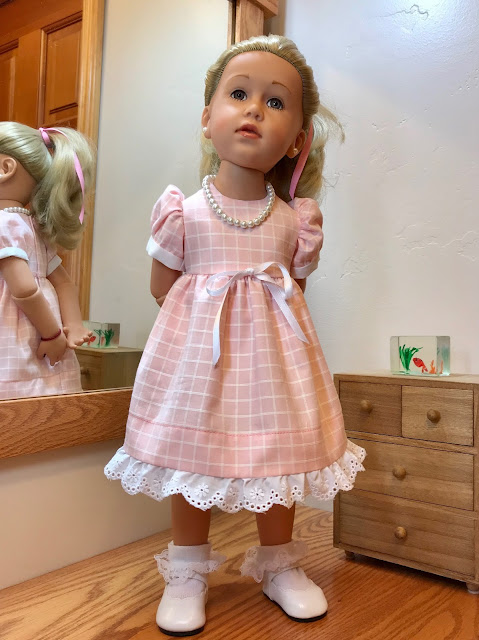 Vroni has this one. 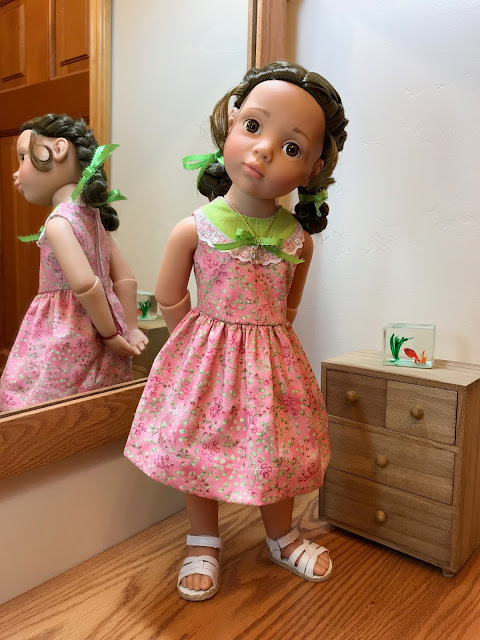 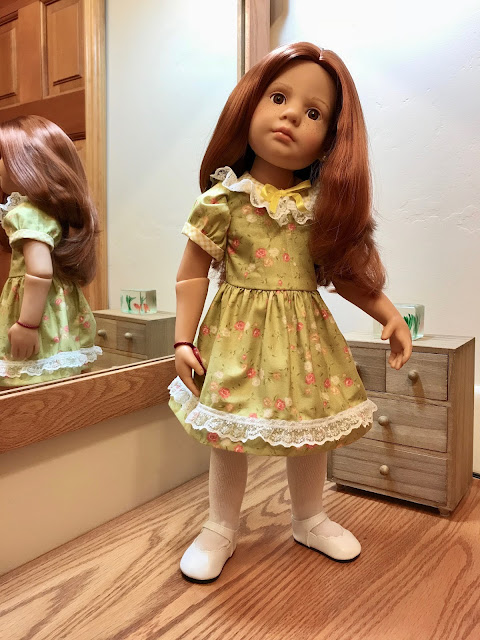 The girls need cardigans, unless it's a lot warmer on Easter Day. Lotte already has a pink one and Vroni has one in a lime green. Mandy didn't have one in a color that would go with her dress. She wanted white. Fortunately, she can help with the knitting. 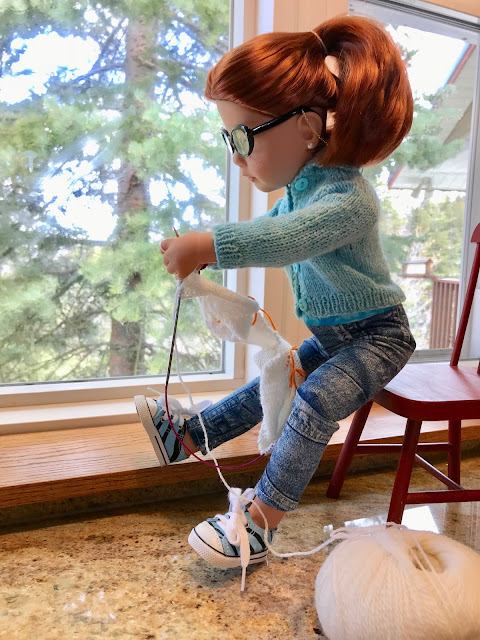 This was the first time she had worked on a sweater. She has only made mittens, scarves and hats before, but she knew how to purl from making the ribbing on Dolly's mittens. We put on "Frozen," which we have as an audiobook, and finally got the sweater finished, so the girls were ready to pose with their Easter dresses and their coordinating cardigans. (No, Mandy didn't make the sleeves shorter because she was tired of knitting around and around. The puffy dress sleeves take up space in the cardigan.) 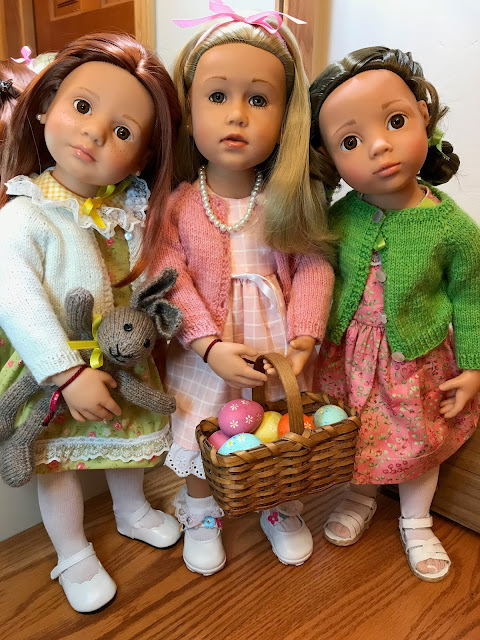 The girls wondered why the eggs didn't weigh very much. 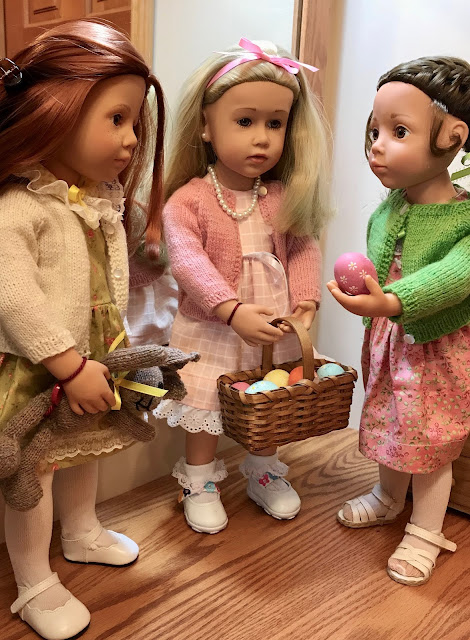 They're just props, girls. We'll dye some real eggs next Saturday. Pose nicely in your Easter dresses and wish everyone a blessed Holy Week and a happy Easter, as well as a wonderful Passover, which we also celebrate in our family, both human and vinyl. 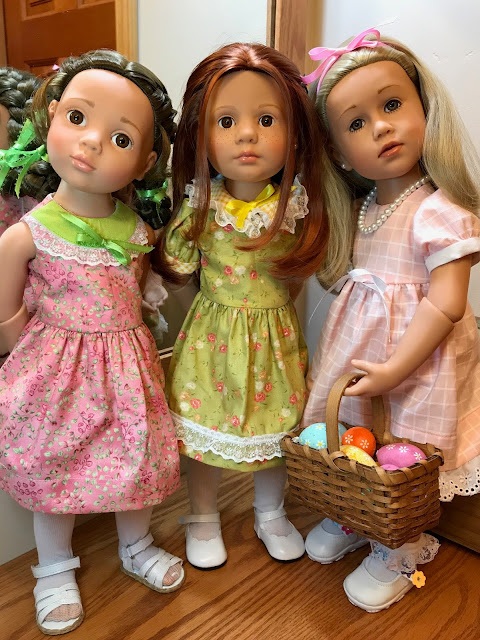 What's on my needles: My Coastal Skies Shawl, using Knockout Round, a free pattern. This time the pattern seems to be satisfying..

What's on my Featherweight: Raincoat for doll…prototype.

What's in my hoop: Still the Spring Flowers quilt. Some progress taking place.

What's on my wheel: Stanzi is put away.

What's on my iPad/iPhone: Finished Listening to Russian Roulette by David Corn and Michael Isikoff. (Chilling, but it puts all the little bits in context.) Then listened to Royal Flush by Rhys Bowen. (Her books are always fun.) Now listening to Georgette Heyer's The Unfinished Clue.

What's my tip of the week: Have trouble sleeping at night? Try melatonin (which is natural) before resorting to sleeping pills. This will only work at night, when it's dark, unless you use a sleep mask. Daylight destroys the melatonin. On the bright side (ha-ha), when daylight comes, it won't leave you groggy.

I am proud of everyone who participated in March for Our Lives.  Such bright, articulate leadership these young voices are exhibiting.

Quite the Easter fashion show!

Thanks, Rebecca. Sometimes I envy you in Canada. I’m optimistic, though, that we may be able to work things out here.

Love the little girls in their Easter best!  They are so lucky to have found a home with you!

As a Canadian we don't face the same kinds of worry about our children going to school, but I am so impressed when I see and read about how the youth in the U.S. are banding together asking for change.

Just Mandy. She started knitting in October, so she could make some mittens for Dolly, who was sick with a cold. It was a "think pink" exercise.

You have taught your dolls to knit!?! You are good.

We're going to Bend, Oregon, where we spent Christmas. DH's brother moved there over a year ago, and he's all alone, and our youngest lives close to Portland, a few hours away, so we will be able to see them more often. Our other two live in Indiana and Wisconsin and unlikely to move. We didn't think the weather there would be much better than here. You'll be hearing all about it.

I have to agree with Peggy about you finding time to sleep. Very pretty and interesting projects and fabric your group displayed.  The girls will be the best dressed kids in church.  Where are you moving too?

Sometimes I don't sleep. That's why I take melatonin.

Another wonderful blog Peggy.  I too am so impressed by the young adults who are stepping up to defend their right to go to school without fear of facing another tragedy.  I love the pics of the dolls & their new Easter outfits.  I swear you must never sleep!