The adventures with brioche knitting continue. Here's how it looked on Friday. 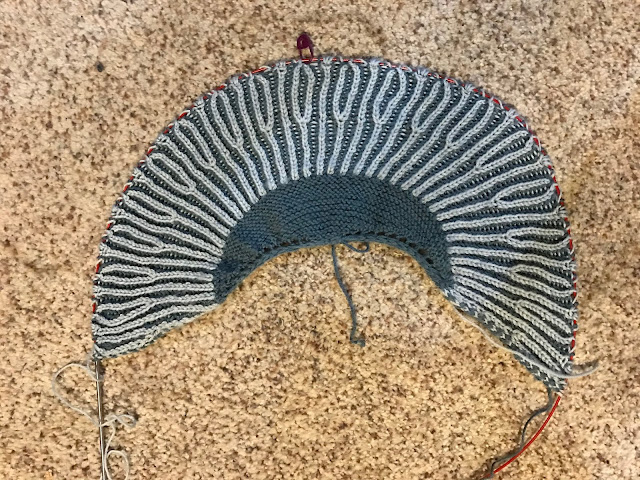 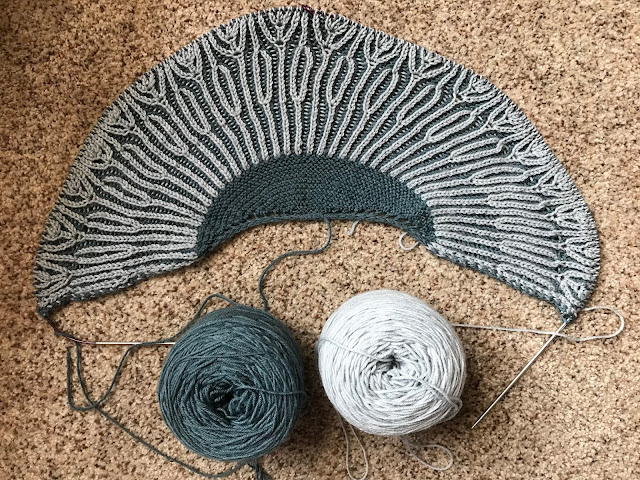 It has been an adventure so far. I misread Row 52 and didn't discover it until I was ready for Row 80. I had to frog back and pick up the stitches from Row 49, to get them all back on the needle correctly. A lifeline wouldn't have helped, because I would have moved it to above that spot. However, it was a good lesson in the structure of the stitch, as was my next mistake. That came when I thought I had a mistake a couple of rows down from where I was knitting. I tried to fix it. It turned out not to be a mistake, but then I couldn't get the stitches back the way they were and had to tink back two rows. The rows are getting longer, so I need to be more careful. I put in a lifeline yesterday.
The cap I knitted for myself a year ago was too big. It came down over my eyes. I had been thinking of shrinking it, but it wasn't until a friend, who had the same problem with a cap, gave his the treatment. Encouraged by his success, I resolved to give it a try this past week. Here's what it looked like before. 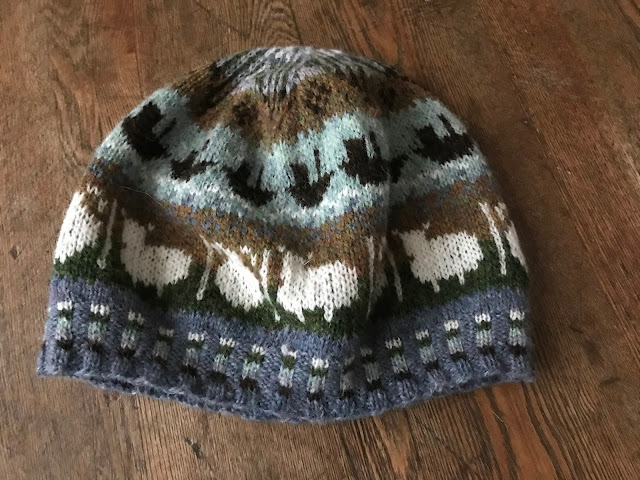 And here is the result after washing in hot water with soap and rinsing in cold. 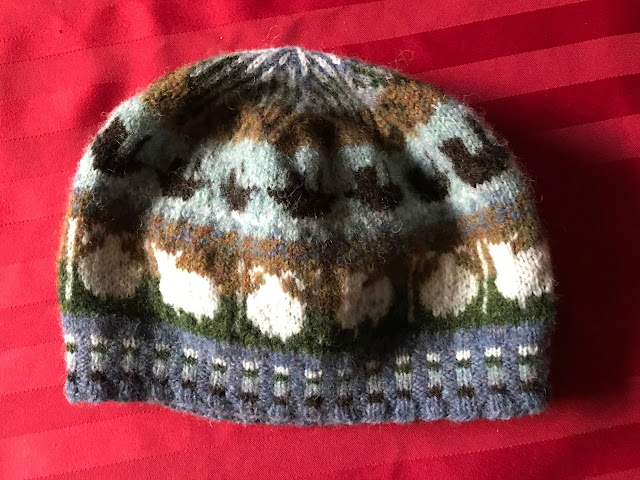 The shrinkage was a lot more vertically than horizontally, which was what I needed. It's still a bit big, but at least I can wear it now. It's much better. I wore it when we went to the dog park on Saturday.

It was a big week for The Doll's Storybook. I managed to do photo shoots for the three stories I had already written, so I'm scheduled through April 23rd.

I learned that as of April 2nd, the book had sold 135 copies worldwide and earned more than $200 for pediatric cancer treatment and research. That doesn't count the books I've sold from home. I found out also that the royalties from Book Baby's bookstore is much greater than from other book sellers. They charge about $5 for shipping, so if you don't get free shipping from other book sellers, it's better to buy from them. Barnes and Noble has it in stock online now, and they have free shipping for members, or you can pick it up in their stores. 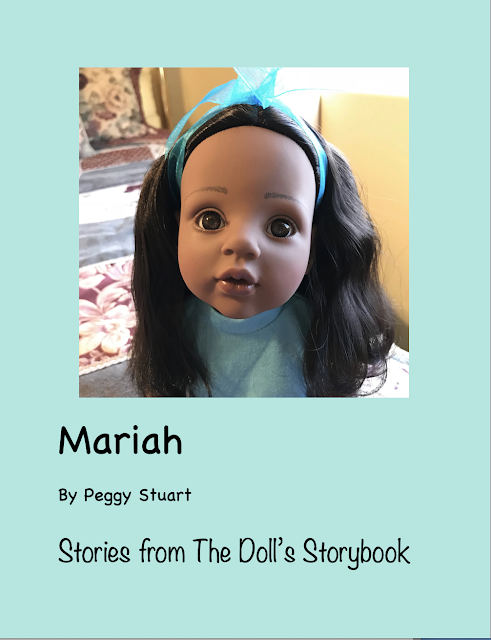 Our local yarn shop has decided to stock the book. I gave the owner/manager three copies on consignment along with links to the patterns for the sweaters the dolls are shown wearing in the book. Her idea was to market it to customers to go along with doll clothes they would knit for a child's doll. Now I'm thinking of including a pattern in the next book.
I still have a box with about 50 copies at my house. When most of those are sold, I will put out another book. I'm already working on Emil: Stories from The Doll's Storybook.
We're starting to see the beginnings of some tomatoes in the AeroGarden. DH uses a small artist's paintbrush to pollinate the flowers. I don't know if this is needed, but we're getting tomatoes. This was Wednesday. 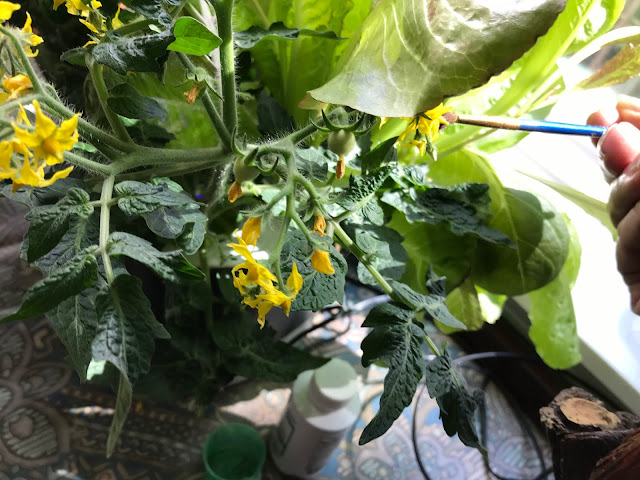 By Sunday, the tomatoes were more obvious and easier to see. 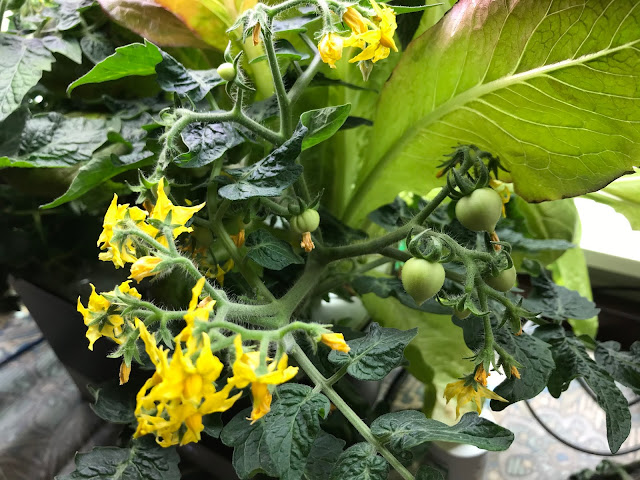 I worked on tidying my fiber studio a bit and managed to get through all the papers. There is still a lot to do, however.
Here's Sunday's service on YouTube. Our piece is at about 1:01, but there is other lovely music as well:

For this week's cuteness, here are the Oregon grandsons. They are back to in-person learning now. 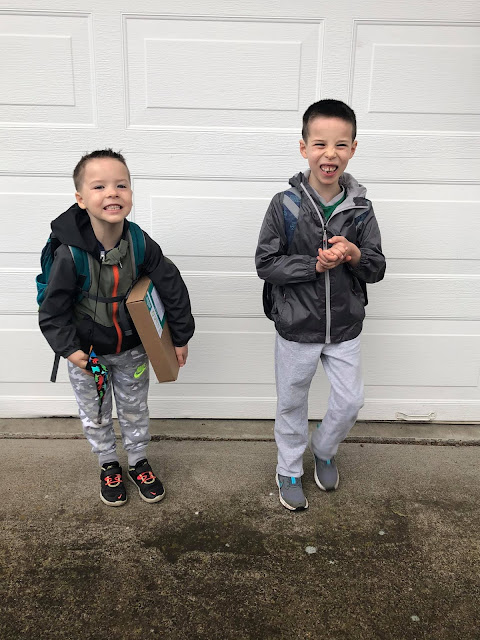 What's on my needles: Brioche Shawl Feathers.
What's on my sewing machine: Dust.
What's in my hoop: Still the Whole Cloth Quilt. A little more progress this week. Very little.

What's in The Doll's Storybook: Jolena lets Pippa watch her make bread in "Rising to the Occasion."

What's on my iPad/iPhone: Still listening to The Black Madonna by Stella Riley. It's a very long book, but I have less than four hours to go.
What's in my wine glass: Sishaye Shiraz 2019 from South Africa. "Sishaye" is Zulu for "Splash." It's the result of a partnership between winemaker Pieter Carstens and Splash Wines.
What's my tip of the week: If you're using interchangeable needles, you can use the little holes in them for putting in a lifeline. I like to use dental floss. Just tie one end through the little hole in the needle you're knitting with. It will carry that end through to the other end. Then cut it off, leaving enough hanging from each end that you don't have to worry about the stitches slipping off, or you can thread each end through a button and tie it. The button will keep it in place. If you find a mistake you can't fix, you can remove your work from the needles, rip back to the lifeline and then pick up the stitches from the lifeline, leaving it in place as you work, just in case. You can either leave it in place until you've finished the project or remove it to reuse higher up, if you're sure everything is correct. It's good to have two, so you can leave one in place while you put in the other.
Where's my book: Mariah: Stories from the Doll's Storybook is available from Amazon worldwide. Also available from BookBaby, Barnes & Noble and other booksellers. Royalties go to support pediatric cancer research and treatment. The three stories in the book first appeared in the blog and they are reproduced with few changes. The stories (and links to them) are Being Little, Besties, and Distraction.
Note: This blog post was produced on the iPad and the MacBook, using the iPhone for some photos and some photo processing. No other computer was used in any stage of composition or posting, and no Windows were opened, waited for, cleaned or broken. No animals or dolls were harmed during the production of this blog post.