High Fiber—Out with the Old

One week ago today it snowed. 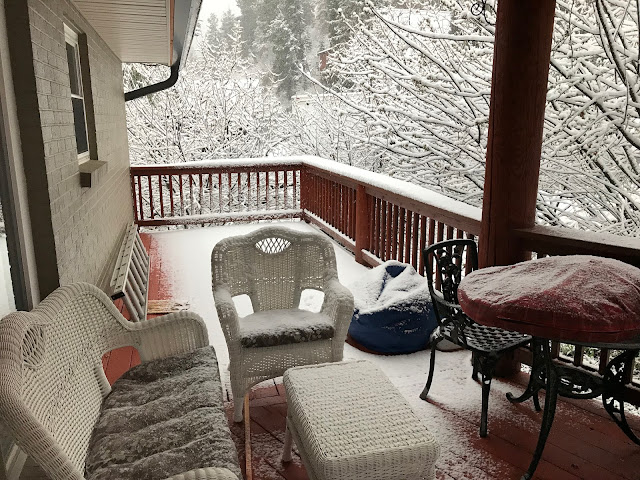 The next day was Dusty's birthday. I was afraid it would be too muddy at Run-A-Muk dog park, but it wasn't too bad, in spite of the snow the day before. 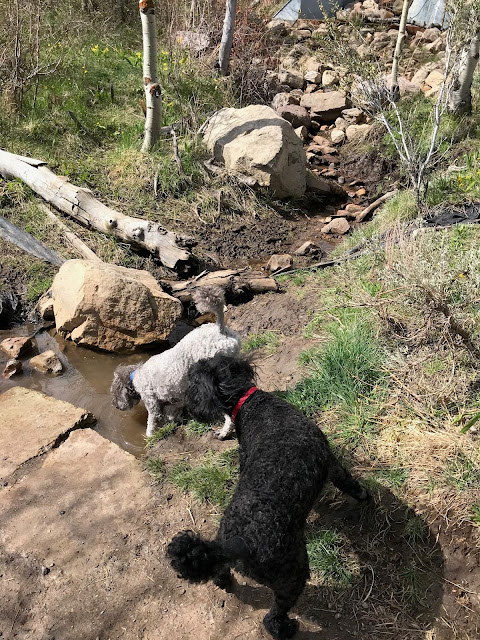 It turned out to be a lovely day. I think we have finally turned the corner, and springtime is here. The hummingbirds sent some early scouts the day before the snow, and they have returned now in the usual numbers for this time of year.

The daffodils are up and blooming. 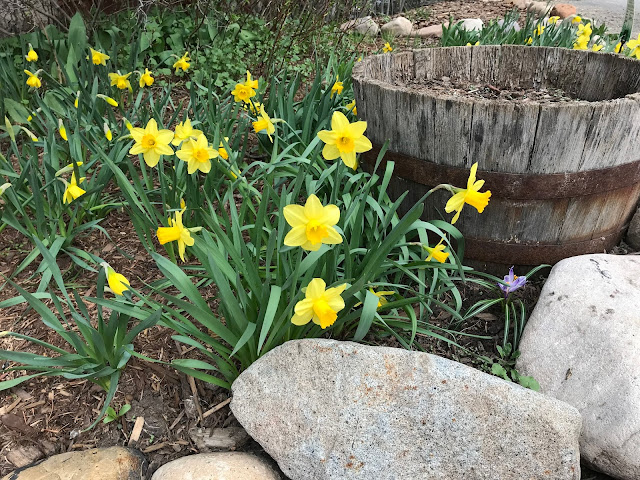 The daffodils and crocuses have a hard time, because we planted them right where we throw the snow from the driveway. Often the first shoots come up under the ice and can't break through, so when that glacier finally melts, we have pale leaves lying flat on the ground. They're hardy, though, and by the first week of May they usually are as happy as daffodils and crocuses can be.

I skipped Common Threads this week so I could continue to pack. We had some young men come to help us load the U-Haul boxes. They do this professionally, so they know what to do, and they're young, so they're unlikely to have medical issues as a result of lifting heavy things. 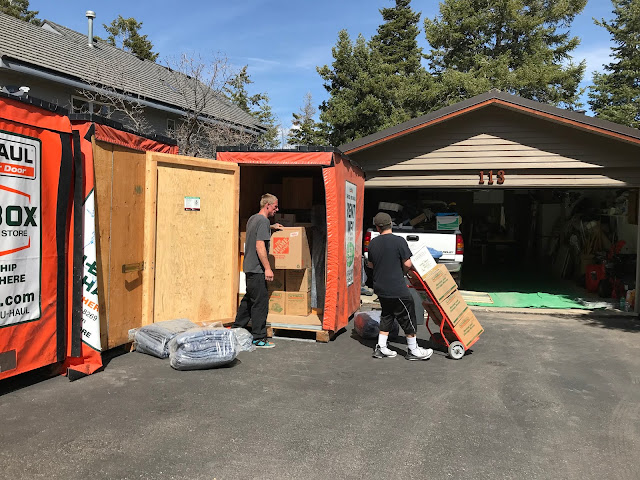 I still have some packing to do, but this is what my fiber studio looked like Saturday afternoon. 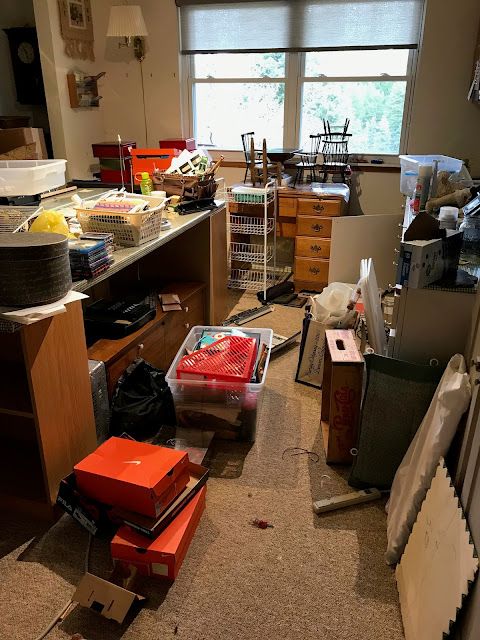 It looks like there's still a lot, but the closet, the cupboard and all the drawers and cupboards are EMPTY! The box in the middle of the room is stuff to give away. The pile of Nike boxes is to use to separate things so they don't rub together, then to recycle whatever is left over. (As the mother-in-law of a Nike employee, there will always be more Nike boxes.)

Here's something old that came out from hiding: We keep finding things, like this old photo of our two older children showing off their new Christmas gifts in 1974. Tim is playing with the cabin we made for him for his Big Josh doll. 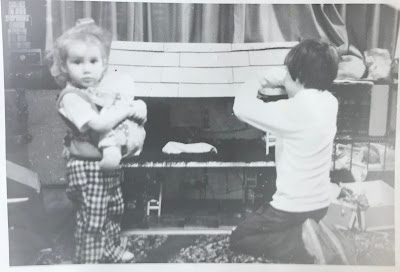 Karen is carrying her Baby Ann in the little baby carrier I made from the same fabric I used to make the one I used to carry her around in and later to carry her baby brother in.

Speaking of Baby Ann, you may remember her from the makeover I gave her last summer after I found her in a box. 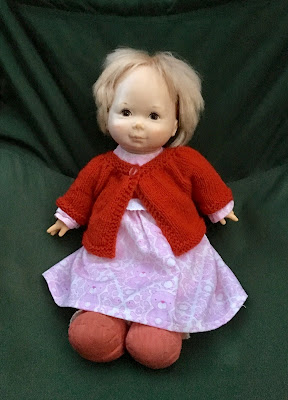 At the time I looked for a photo of Karen carrying Baby Ann around right after she got her, but I couldn't find one then. So when you least expect....

Speaking of dolls, I didn't have much tine to knit this past week, but I'm working on another Russian dress, this time for Vroni. I wanted to test the pattern I wrote (and I've been finding lots of mistakes), as well as finding out if the skirt could be knit with dpns instead of circular needles. The best way to find out if something works is to try it. I'm hoping to be able to get the final 414 sts on 9 dpns, leaving one to knit with. That means 46 sts on each needle. This is what I have so far. 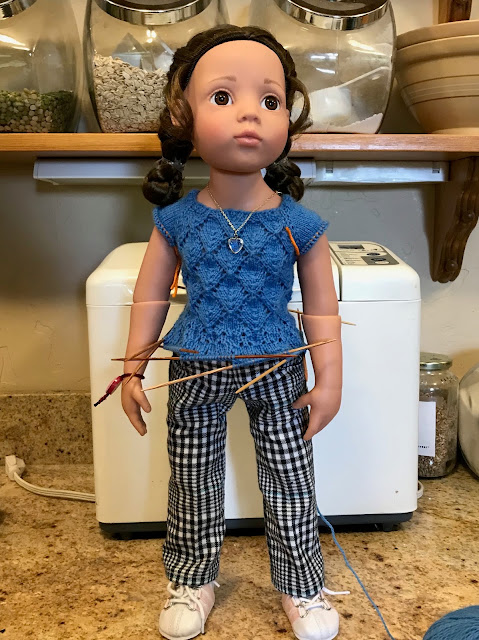 It looks like some kind of torture device, but Vroni doesn't complain.

Dolls are so much easier than children...or dogs. Our granddog Louis needed emergency surgery on Saturday for a blockage. It turned out to be the foot from his elephant (in one place) and a small dinosaur that belonged to one of the boys (in another). 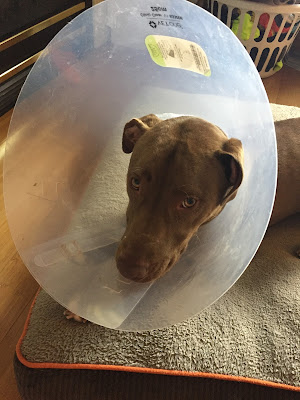 He has a lot of medication to take and has to wear the dreaded "Cone of Shame" for 10-14 days. Otherwise, he seems to be doing OK.

What's on my needles: Still the Coastal Skies, a little more progress made, and the third Russian Dress.

What's on my Featherweight: Put away in its case. I've decided to move it with the furniture. I gave away my zigzag sewing machine and plan to replace it when we get to Bend. The replacement will also be able to do straight sewing, so I won't really need my Featherweight until I get back to quilting, and I'll have access to everything by then.

What's in my hoop: Still the Spring Flowers quilt, no progress made this week.

What's on my wheel: Stanzi is still in hibernation. I may set her up in the fiber studio after we clear out all the stuff, just to make the room look like a home.

What's on my iPad/iPhone: Finished The Miser of Mayfair by M. C. Beaton. Her books are always fun. Now listening to The Young Clementina by D. E. Stevenson, one of my favorite authors.

What's in my wine glass: Another Charles Shaw “Two-buck Chuck” Shiraz. We're trying to use up our stash, as we will be moving what we have left. I guess we need to have a party.

What's my tip of the week: Drop a tiny piece of egg shell in the egg? The best way to get it out is with a larger piece of the shell.

It looks like you are making giant strides in your pre-move project. I hope you do not have to be separated from your stuff for long.

We have gone into spring too but snow can still circle around and kill off my baby tomatoes. There is no firm date for safe planting around here.

Irene, I’m attached to them, too.

You’re right, Rebecca! It isn’t just the long winter; it’s also the snow in the driveway and  on the roof.

About the nine dpns: you only use two at a time. The others are just stitch holders until you get to them.

Looking at that late snowfall, I have to say that I'm not surprised that you've decided to move - even if the late snowfalls aren't the main reason.  The last snow from our very snowy winter has finally melted away!  We've been in this house for 24 years and this is the latest that there has been remnants of winters snow still on the ground.  We had a very late spring.

I can't imagine handling 9 dpns when I'm knitting, but maybe I'd find it easier than learning to use circular needles. I think I need to take some lessons.

Thank you Peggy I'm glad to hear that. I'm quite attached to your girls and their wardrobes. lol

Irene, I'll keep the blog up as long as I can. It helps me keep track of what has happened during the week.

Great blog as usual Peggy. The flowers are beautiful. They are blooming here now that the snow is finally gone. I hope your doggy is doing good after the surgery. You never know what they are going to swallow. I hope when you move you still have time to keep us updated on your projects, and life in general. I look forward to reading your blogs.

It isn’t that I prefer it; it’s that some people have dpns but not circular needles and vice versa. It’s always good if you don’t have to buy new equipment you don’t otherwise use.

Thanks! I really just wrote a pattern for a dress that already existed, but in Russian.

My curiosity is up- why would you prefer 9 dpn to a circular needle?  You did design a spectacular dress!