One of the planned chores I had set for myself this past week was to repair this hole in my favorite afghan. 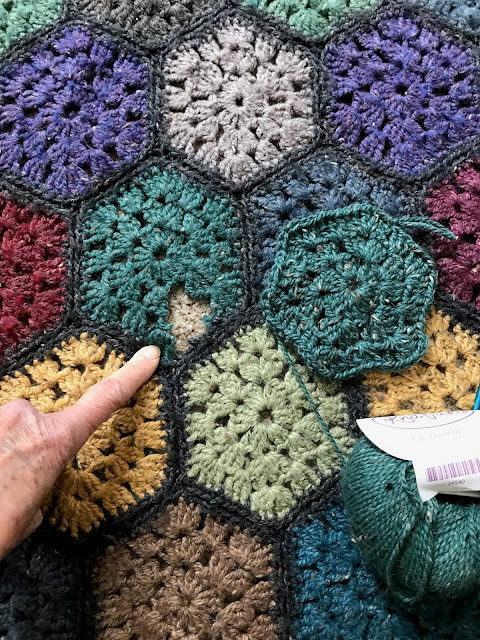 I crocheted it several years ago with Knit Picks City Tweed DK using Shaina Scott's Busy Bee Throw pattern. I wasn't sure I had any of this yarn left, but I went stash diving and came up with a single but unopened ball of yarn, and it was the right color: Enchanted. It was fairly easy to make a new hexagon to replace the damaged one. What wasn't so easy was to pick out the pieces of the damaged hexagon and the black (Obsidian) yarn I had used to edge each hexagon and sew them together. I didn't have any more of that in my stash, so I was forced to salvage and reuse the yarn from the afghan. Here it is after the repair. The new hexagon looks a little less fuzzy than the old ones around it, but time will take care of that. 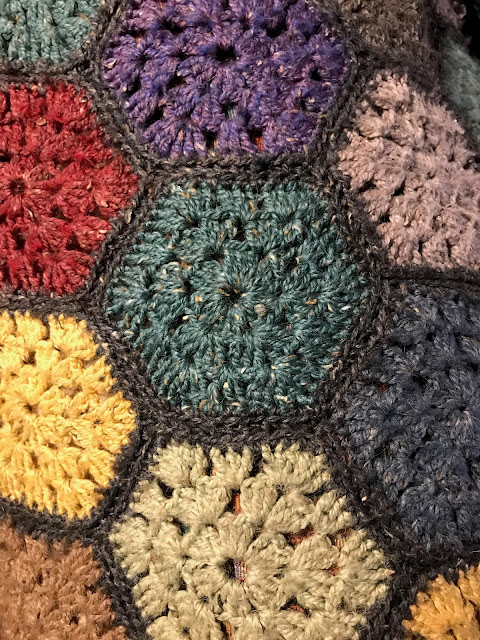 How did this damage occur? It had to do with a dog and a toy in the lap of someone sitting on the couch under the comfy afghan.

I worked on the Mystery Knit Along shawl project for the Rose City Yarn Crawl. I finished Clue #4, and #5 is due later today. I can't show it yet, as some people want to be surprised about what it looks like, and they may not be as far along. DDIL and I are both making this project, and we will wear them when we participate in the Yarn Crawl next month.

It's fun to be sewing again. I've been working on some clothes for Billy and will start on a wardrobe for Alister to go with him when he goes to live with Zachary in April. I plan to try Billy's clothes on Alister to see if I can use any of the same patterns the way they are or if they need alterations. I started out by making a pair of jeans using the Liberty Jane Boot Cut Jeans pattern from Pixie Faire. It's designed for American Girl (and Boy) dolls, which are a bit larger around than Götz Happy Kidz or Classic Kidz, but I've figured out that only the pants back pattern needs alteration, and I have a pattern piece I substitute when I use this pattern. The only other changes are a shorter waistband and elastic. 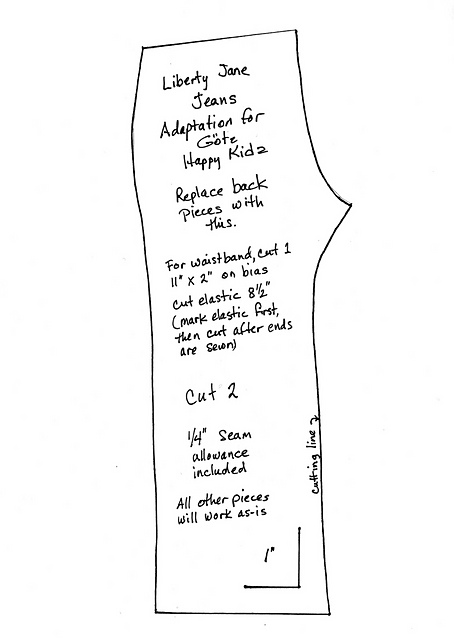 The shirt is entirely my own pattern. I usually cut the pocket, collar and cuffs on the bias, but I only had a fat quarter of homespun for the shirt for Billy. I was able to fit all the pieces on and have enough room on the fold by folding the fat quarter lengthwise. The back yoke and cuffs have to be cut out twice, but they fit. There wasn't much fabric left over, though. 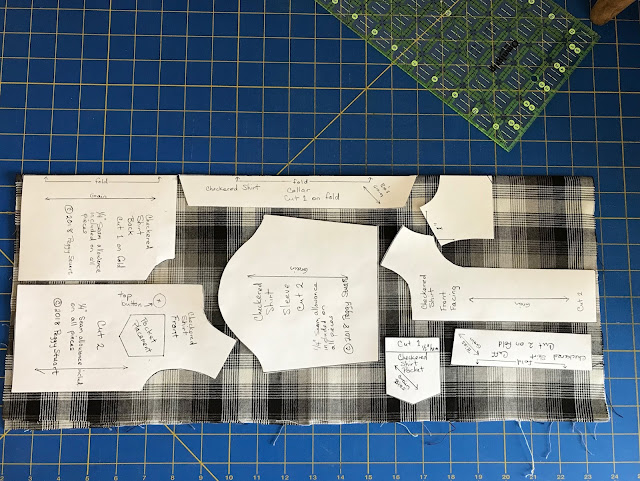 My pattern for the shirt is in this blog post.

Then I made Billy a baseball cap, using the Lee &amp; Pearl Classic Ball Cap pattern. 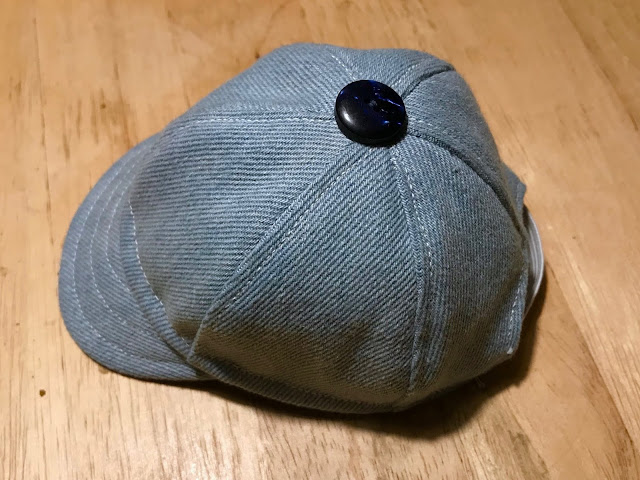 Here it is from the back. 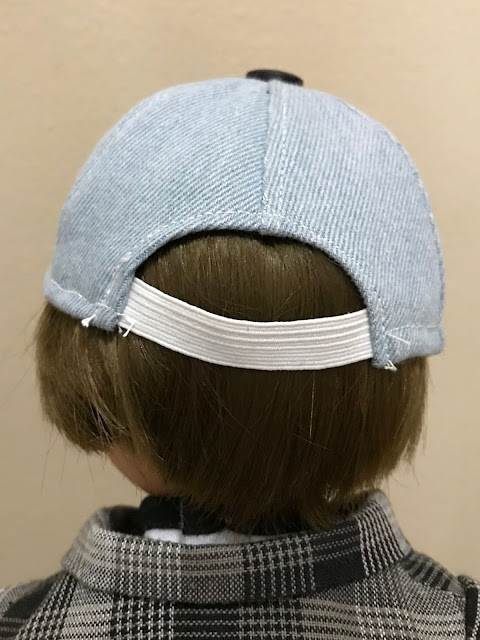 Here's the finished outfit. (He's wearing the shirt over his T-shirt, because it's cold, even indoors.) 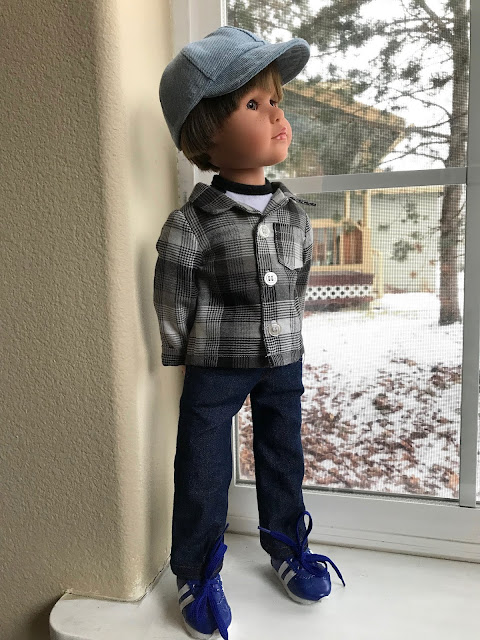 I think Billy is happy with his new outfit. 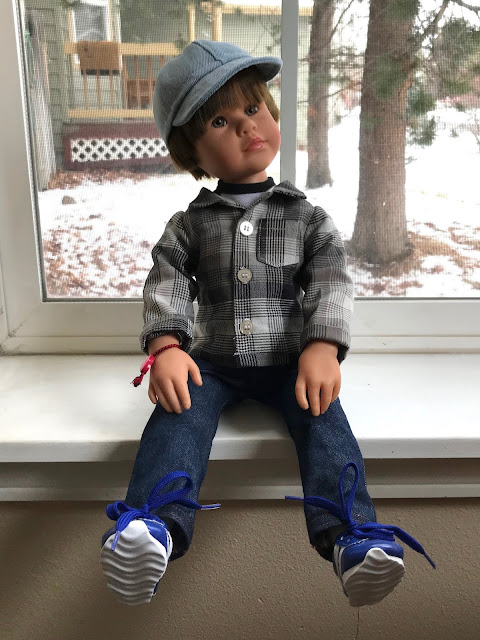 I'm planning to make Billy a dressy outfit, too, with a short-sleeved dress shirt and sweater vest. I CO for the sweater vest on Saturday, and the shirt is cut out and started.

We have been getting more snow, and quite a bit came down on Thursday. We decided that not too many people would be driving around in the middle of the day, so we took our two vehicles to the Department of Motor Vehicles to register them. 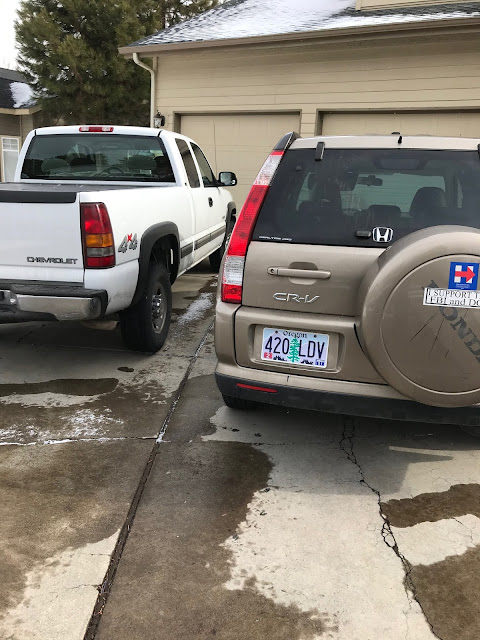 In spite of the weather, we managed to get out to walk with the pups. Dusty needs the workout more than Rocky does, but it's good for both of them. Here they are after a nice walk, enjoying the couch. I (keep a quilt on the couch to protect it. I have two that are the right size, and I switch them out when one needs washing.) 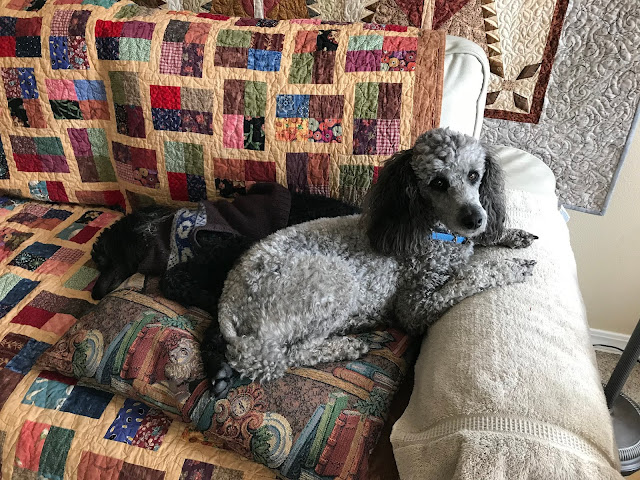 Rocky is passed out after our walk, and Dusty is watching the street. They go to the groomer today!

What's on my needles: Still the Mystery Knit Along for the Rose City Yarn Crawl next month. I finished Clue #4 Friday night. The next clue is due today. Also working on a sweater vest for Billy.

What's on my sewing machine: More clothes for Billy.

What's in my hoop: Still the Spring Flowers quilt; no progress this week.

What's in The Doll's Storybook: "Meeting the Elephant," where the dolls wonder about why we have different religions.

What's on my iPad/iPhone: Finished The Cuckoo's Calling by Robert Galbraith, a.k.a. J. K. Rowling. I liked it, although it was difficult to keep up with all the facts uncovered by the detective. The ending was a surprise, but it made sense. Then listened to The Shark by Mary Burton. The story was good, but I have a problem with explicit sex scenes in audiobooks. I bought it because it was a Daily Deal from Audible, so it didn't cost much. Now listening to Winter and Rough Weather by D. E. Stevenson, one of my favorite authors.

What's my tip of the week: My tip this week is a recipe.  When we have bananas that are getting overripe, I often make us smoothies for breakfast. Sometimes, though, I throw 2 bananas into the blender with 2 eggs, 1 teaspoon vanilla, 1/4 cup milk, 1 tablespoon oil, 1 teaspoon baking powder, 1 cup rolled oats and 1/4 cup oat bran. I blend it until it's smooth and bake in my 54-year-old waffle iron. (It can also be used to make pancakes, but for that, the oil can be omitted or reduced.) 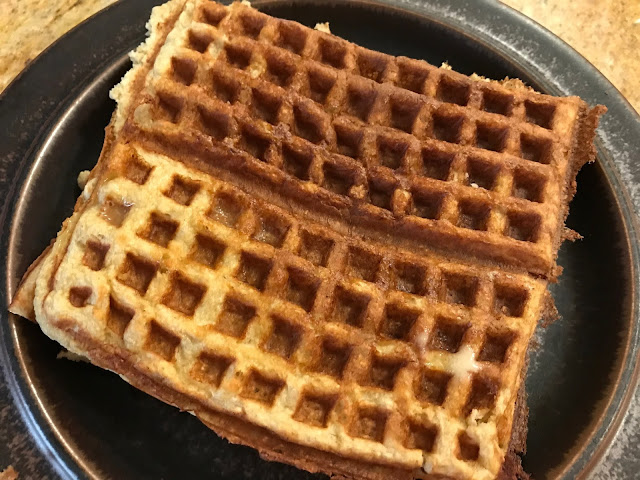 Jan and Janet, put the kettle on. I’ll be over for banana bread!

I think your mending was perfect.

I made 2 loaves of banana bread today.

I make banana bread out of my old bananas.  If I know I'm not going to get any baking done before they are too far gone, I just freeze them until I'm ready to bake.

You did a fabulous job with that repair on the afghan.  Love Billy's new outfit.