Fiber first, as usual. I needed a lightweight project to take with me camping and on the plane, so I started the Ginger Leaves Shawlette by Christina Wall. 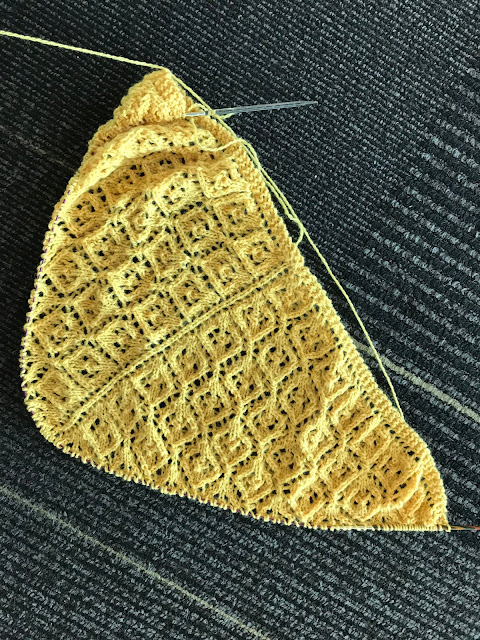 I was planning to do just the kerchief, but then I decided it was going to go too fast, and I would have enough yarn to make the larger version.

Most of the week was spent in getting the trailer put away and getting ready for the trip to San Diego for DH's 60th high school reunion, but our DDIL had brought me a bunch of tomatoes from her veggie share, and I needed to freeze them. 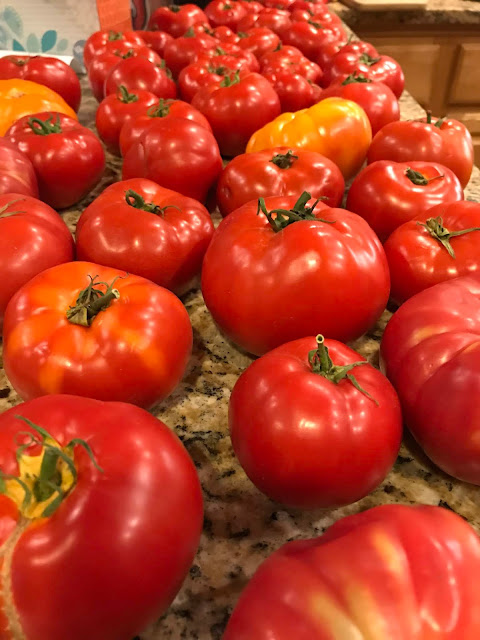 I know you can just throw them into a bag and freeze them, but I decided to peel them, so I blanched them and pulled off the peels.

We didn't know when the first freeze would come, so DH harvested our pitiful crop of tomatoes. 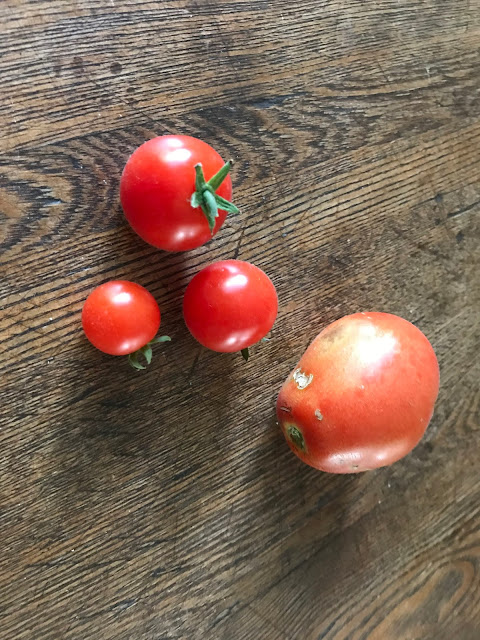 We had gotten a late start, but we expect to better next year.

Wednesday night, we dropped the pups off with DBIL, who is just three blocks away from us. They know him, and we have stayed with him in his house, so they didn't seem to mind being left. He sent us this photo Thursday night. 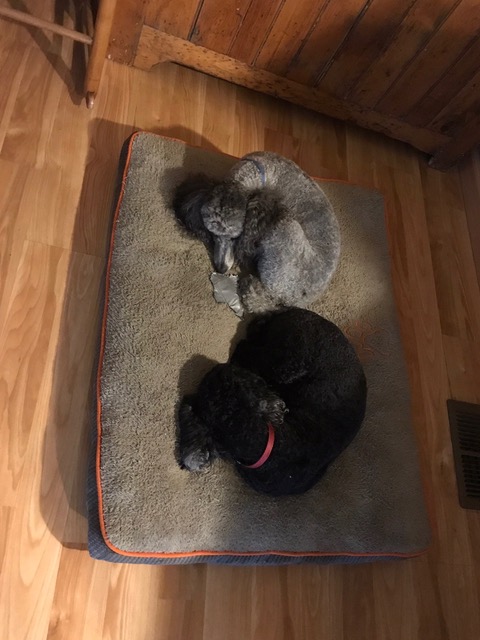 We flew out of Redmond early Thursday after breakfast at the airport. We had to go through Seattle, so it was a long day. After we arrived and checked into the hotel a few blocks from where DH used to live on Point Loma, we went out for a walk to the fisherman's wharf and then along the harbor to see what was new since we were here last. San Diego has a lot of new microbreweries, and one of them is located right along the walkway. We decided it wasn't too early for a glass of beer. 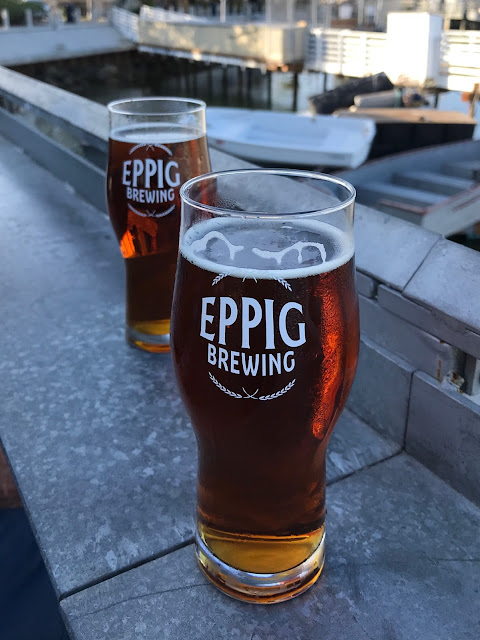 We walked a little further and finally stopped for dinner at a real Italian place. We left with a box of leftovers for the next night. Our waitress looked just like Lúcia Moniz, the actress who played Aurelia (Colin Firth's character's cleaning lady, and ultimately love interest). She even had the charming accent, but Italian, we think, not Portuguese (as we think Aurelia was). If was almost like going to Italy for dinner, as all the servers and other members of the staff seemed to be Italian. 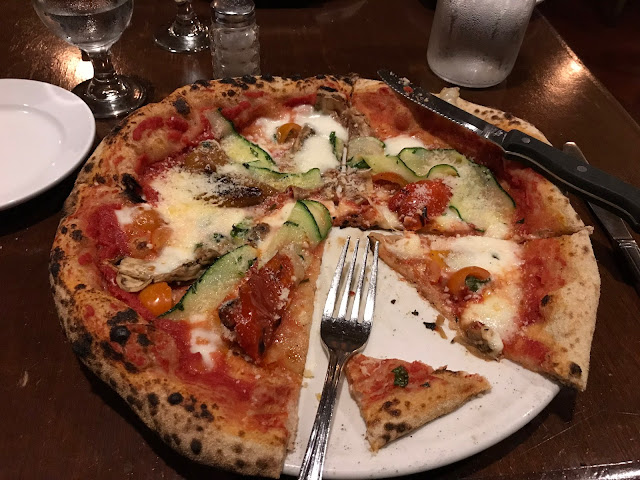 The next two mornings found us walking Shelter Island. One of the sights was this monument to the fishermen who have been lost at sea over the years. 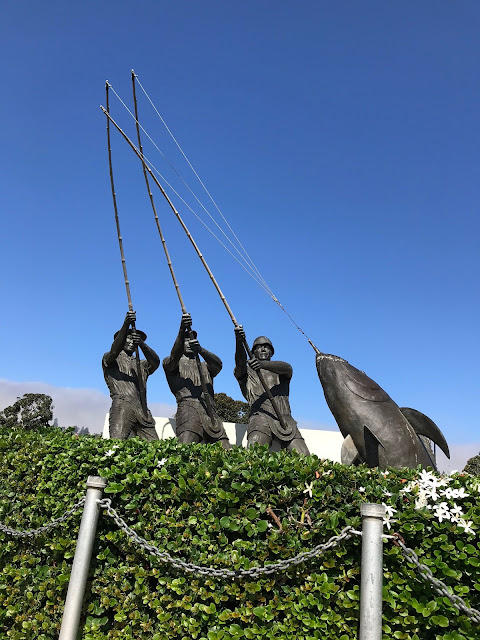 On Friday, we visited with an old friend from college at lunch, which lasted several hours. After that, we picked up some flowers and took them out to the Fort Rosecrans National Cemetery, where my in-laws are interred. 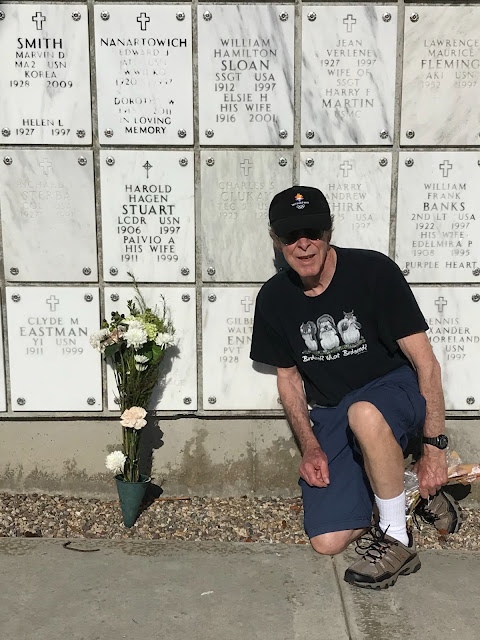 During our Shelter Island walk on Saturday, we stopped at the Half Moon Inn, now called Humphrey's Half Moon Inn, where we spent our wedding night 54 years ago. The concierge, a charming gentleman originally from Mexico, who has worked at the hotel since 1973, obligingly took our photo in front of the hotel. 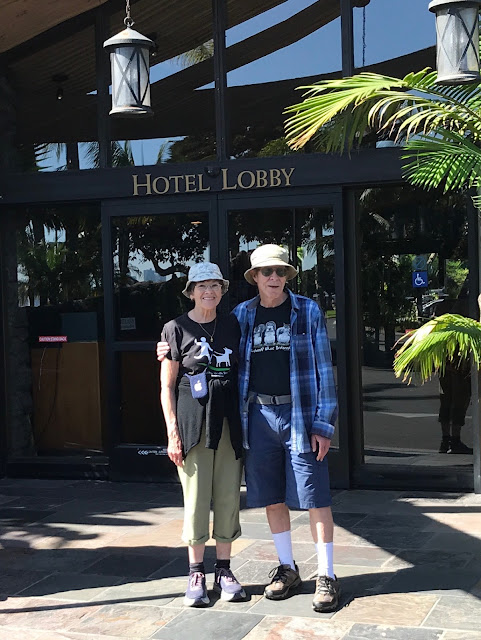 We had two parties to go to on Saturday. The first was a check-in and get-together at a place called The Thursday Club. It's primarily a venue for weddings. There was a buffet of appetizers and a bar with wine, beer, soft drinks and cocktails. A band belonging to one of the alumni from Point Loma High School's Class of '59. 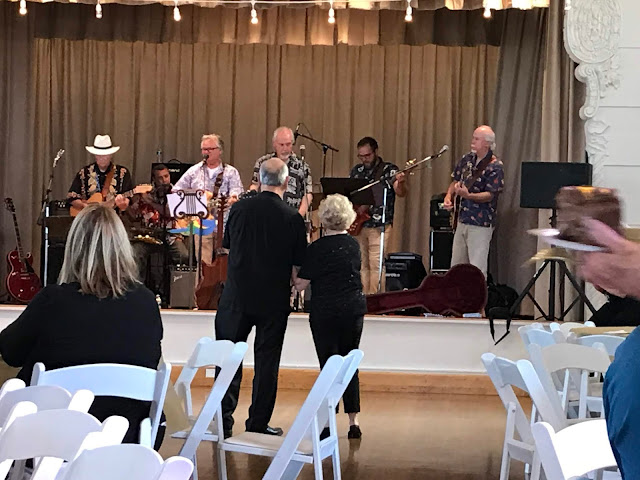 Some people got up and danced, but most were trying to find old friends and carry on a conversation. It was a great band, though, and they played a lot of tunes popular in the '50s, when we were in school.

After that, there was dinner at a local Mexican restaurant. 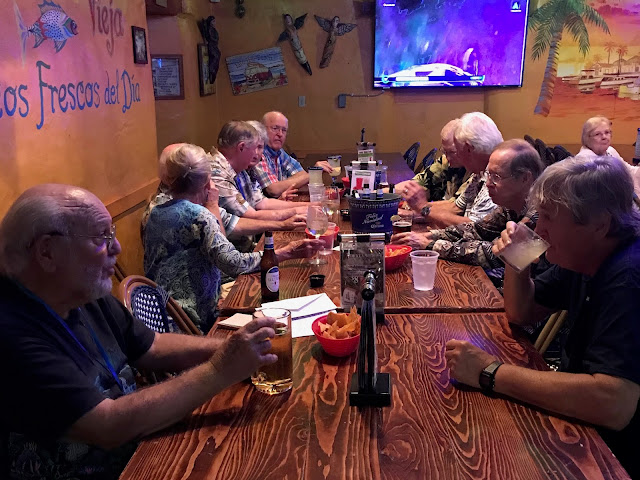 Even though I went to a different high school and graduated a year later, I had lots of memories from the time before and after I met DH at San Diego State, so I could follow the conversation. It was also interesting to hear about where his friends had gone and what they had done since high school. I didn't meet any old girlfriends, but that isn't surprising, because my DMIL told me should couldn't remember that he ever dated a girl more than once before me.

Sunday morning, coincidentally our anniversary, one of the classmates treated us to a champagne brunch at the Bali Hai on Shelter Island. I ended up the only woman at our table with seven men. (One was walking around when I took this photo.) Sorry the photo is backlit, but we had a window table with a gorgeous view of the harbor, with sailboats tacking here and there. 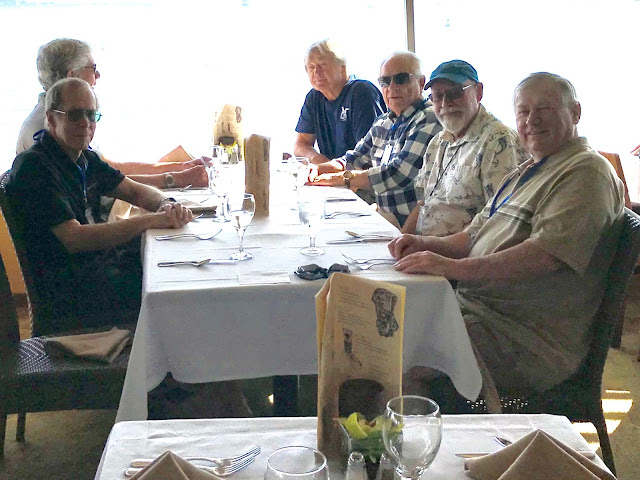 After brunch, we had a few hours before our rental car would turn into a pumpkin, so we went out to Sunset Cliffs, where DH reminisced about some of the fun he had as a kid coming to the beach and playing along the shore and in the rocks. You can sort of see how he became interested in geology. 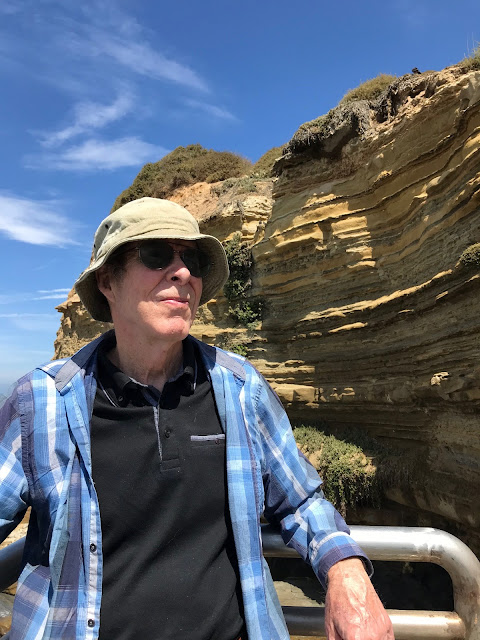 There were a lot of surfers, but the surf didn't seem very good, at least not like the photos you see. It was beautiful, though, and the day was sunny and warm. 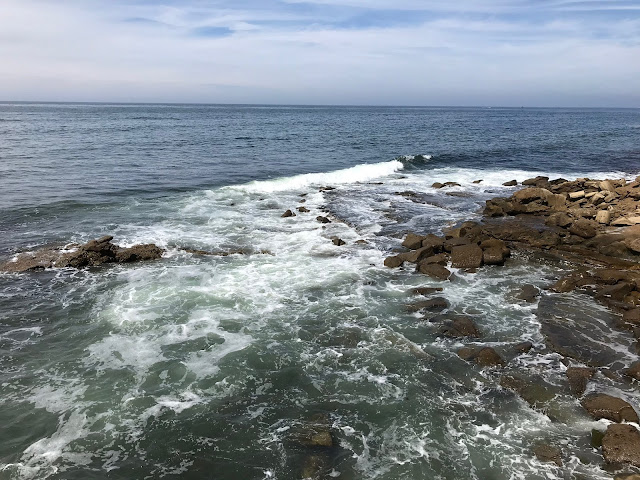 We flew through Salt Lake City on our way home. It was the perfect end to a perfect day. 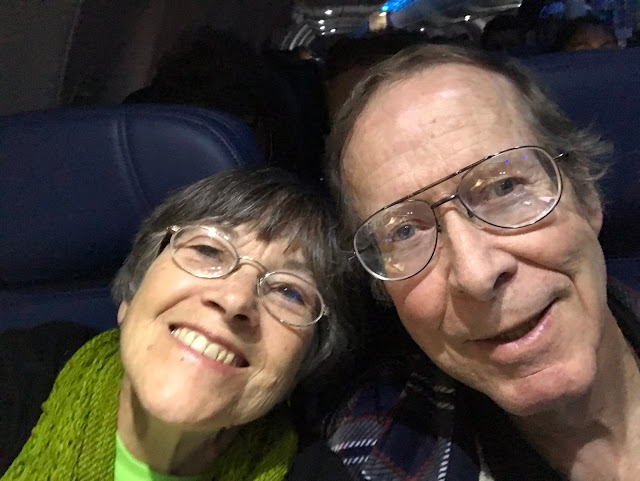 It will take a couple of days to recover. We got in about 11:00 PM and had to drive home in the rain, so it was after midnight when we finally feel into bed, exhausted but glad to be home.

What's on my sewing machine: Waiting for doll clothes, mostly.

What's in my hoop: Still the Whole Cloth Quilt.

What's in The Doll's Storybook: Getting Answers, which came out Friday.

What's on my iPad/iPhone: A Scandal in Battersea by Mercedes Lackey. There hasn't been time to listen much this week, so I've really only just started it. We used the Walk for a Dog app a lot. (You can designate "no selected dogs" if you have to walk without a dog, or they can let you "walk" their office dog.

What's in my wine glass: Still the Rex Goliath, although there have been a lot of others this past week.

What's my tip of the week: You can eat and drink a lot and still lose weight if you do enough walking. We walked 11 1/2 miles while we were in San Diego, including those steep steps at Sunset Beach.

It's nice you got away for a bit and had a good time with old friends and classmate. I'm with you on not liking heavy traffic and the heat.

I hate traffic. I miss being able to go everywhere on a bike.

Larry has 2 nieces that live close to SD, but further out where it is more affordable.  I'm not crazy about dealing with a lot of traffic either.  That is one thing I definitely don't miss about living in Las Vegas.

Comment by Peggy Stuart on September 16, 2019 at 4:19pm
Carol Ann, we enjoyed Dana Point, but it has grown substantially, too. I think San Francisco is probably one of the most expensive areas in the country.

Welcome to California, Peggy!  Every major city here is crowded, mostly dirty, has terrible traffic and is really unaffordable to live in.  Don't even think about San Francisco!  We'll stay in our little rural valley town with an escape from the heat to our cabin on the slopes of Mt. Lassen in the summer!

Janet, San Diego is a nice place to visit, but I wouldn't want to live there again, and not just because of the cost of housing. It's much too crowded for my taste, and I really don't like the traffic and the hot weather. Everything cost more, too. However, we found the people to be friendly and interesting.

I love San Diego. Sure wish housing wasn't so expensive as we would probably be living there.  I recently found out that some of my former classmates are planning a 50th reunion in Michigan for next year that I might try to attend.  I have only seen 1 former classmate in the past 49 years though so I have been comparing their Facebook pics with their senior pics.  Was a good reminder that they too are all 49 yrs older!