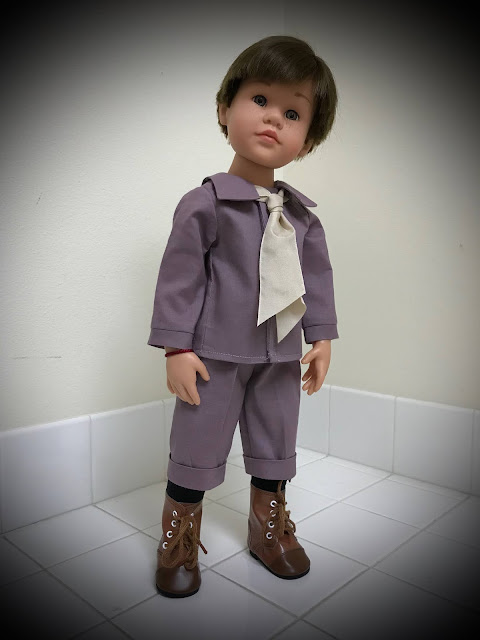 I made a Victorian outfit for Billy, to go with the one I made for Jolena last month. Both outfits are part of a JAL (Join Along) or KAL (Knit Along) in the Goetz Doll group on Ravelry. It's called Victorian Valentines and Tea. The activity has inspired me to use the outfits in this week's story, which will come out on Friday, Valentine's Day.

I decided Billy needed a hat to go with the Victorian outfit. This will be a newsboy cap from this pattern, using yarn from my stash. I have no idea what the yarn is. I think someone gave it to me. It feels like wool, though. The color is pretty and will go with Billy's outfit. 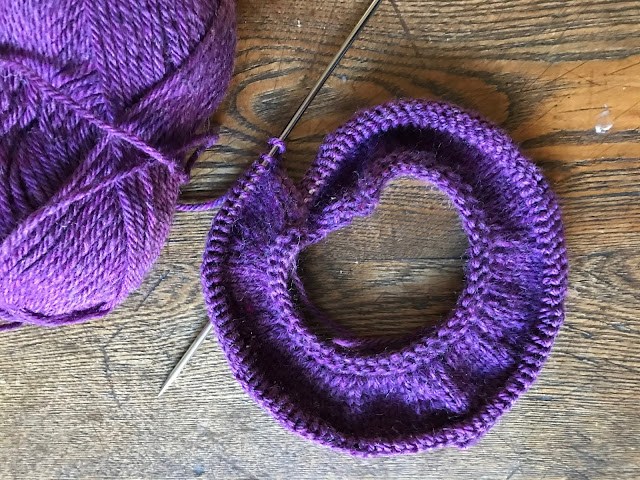 Even though I was busy with Billy's Victorian costume, and knitting his hat, I managed to get a little more done on my Maine Memories Cardigan. I've started the left sleeve, and while I had my sewing machine out, I sewed the lines of stitching for the steek, which you can just make out in this photo. I will have to figure out where to start the colorwork on the sleeve, which is at the bottom. I plan to cut the sweater open, so I don't have to pull it over my head to check on the sleeve length. 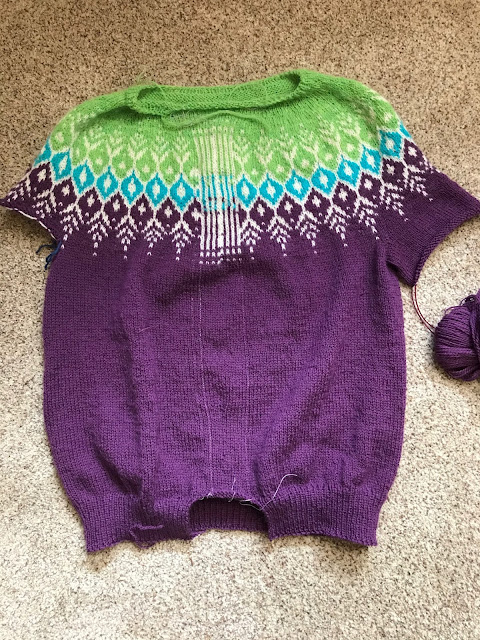 I finished Clue #3 in the Rose City Yarn Crawl's Mystery KAL. I can't show the photos yet, just in case someone reading my blog is participating and wants to be surprised.

The knobs are going onto the cabinets. DH has finished installing them on the kitchen cabinets. Even though he has tremors in his hands, he's good at it and has installed knobs and handles before, like when we remodeled our kitchen in Utah. When he finishes with the knobs, the handles will go on. Or maybe he'll finish the kitchen (knobs and handles) before doing the bathrooms. (Please excuse the mess; he leaves his tools out until he's done.) He's saving us some money by doing this himself. 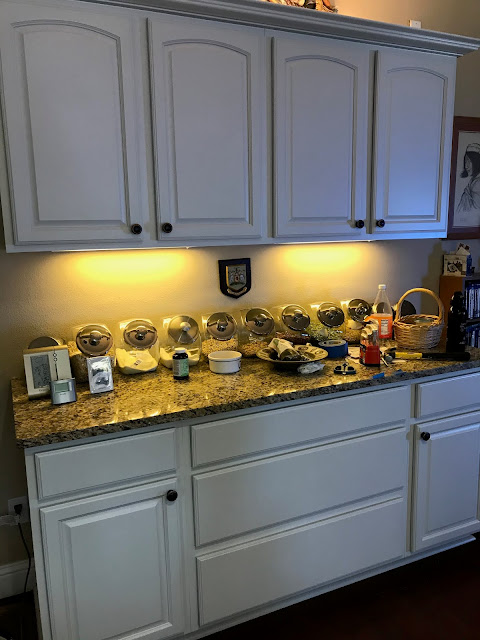 On Friday, Bend had one of its "First Friday" events, where most of the stores downtown are open, and drinks like wine and beer, or sometimes cocktails are served. Some of the stores have snacks along with the drinks, and live music, like this art gallery. 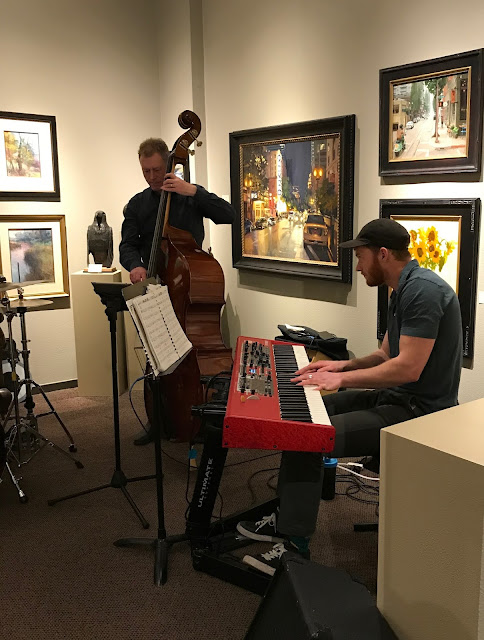 The three of us, DH, DBIL and I, went and had a good time. 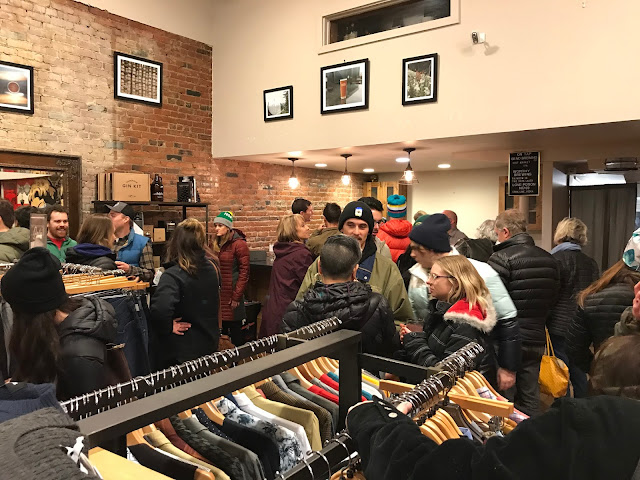 This a cappella group was singing in one of the stores. They are called Bella Acappella Harmony. They are affiliated with the Sweet Adelines. 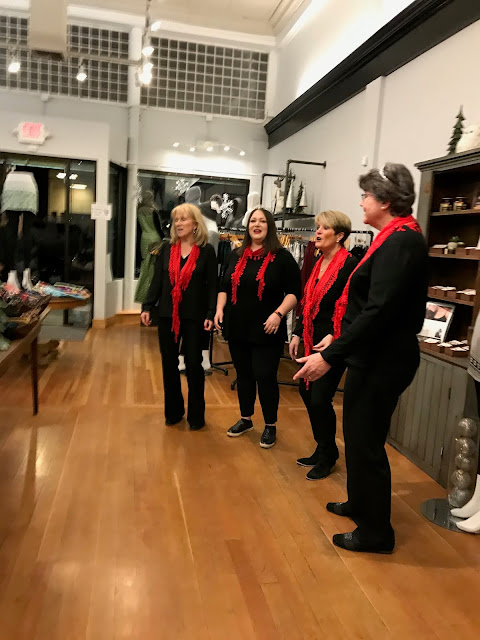 One of the ladies in my church choir is in the group and asked me to come and see if I would like to sing with the group. They sang a few popular tunes from the '40s and '50s. It was fun to listen. 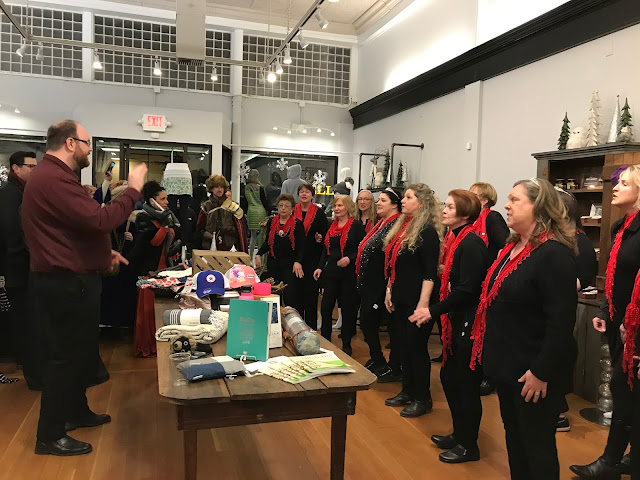 We haven't walked much lately with the dogs. It has been very cold, cold and windy or cold and rainy for most of the week. However, Sunday it was just cold, and with the sun out, it was pleasant, so we took the ball and walked the dogs. They were so happy to be out. (I think all eight paws were off the ground in this shot.) 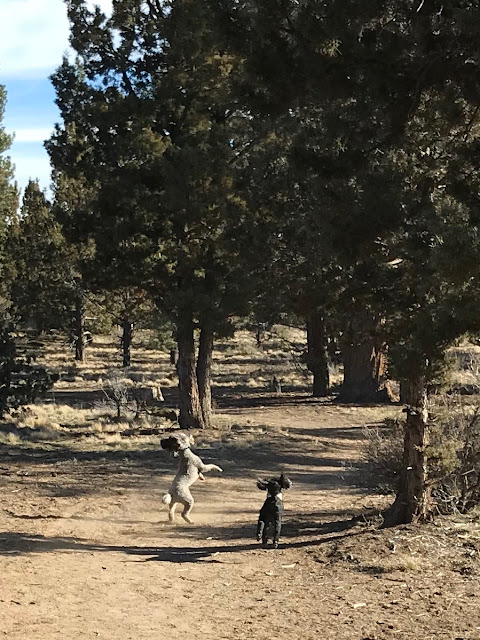 It's good to have them worn out. They look so cute cuddling on the couch. This was from a few days earlier, but they were doing the same thing after our walk on Sunday. 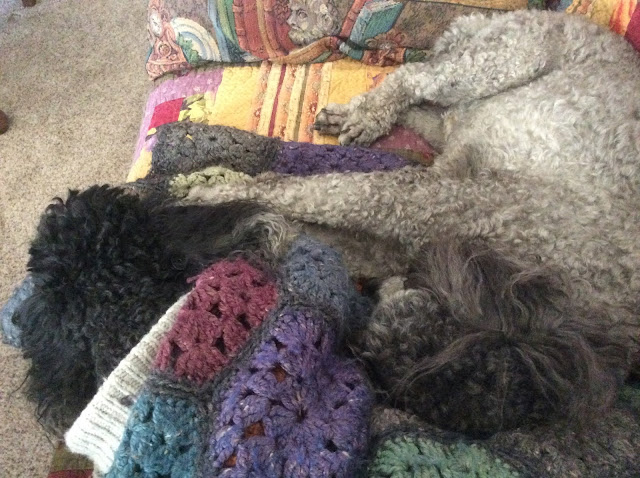 Sunday evening, we watched The Academy Awards, in great hopes that Missing Link would be selected as Best Animated Feature. (You may remember that our son works for Laika, the film studio that produced the film, so we have a special interest.) It didn't win, although it did win the Golden Globe in the same category. I guess they're trying to spread them around. As always, it's an honor to be nominated.

What's on my needles: Still the Maine Memories, and now a hat for Billy, as well as the Rose City Yarn Crawl MKAL project, awaiting Clue #4, which comes out today. I promise I will show it when the KAL is over.

What's on my sewing machine: Just finished the Victorian outfit for Billy.

What's in my hoop: Still the Whole Cloth Quilt. Another week with no progress. (Sigh!)

What's in The Doll's Storybook: Friday's story was "A baseball Game With a Strange Ending." Jolena and Billy ponder over an unusual situation where a friend didn't want to be touched. 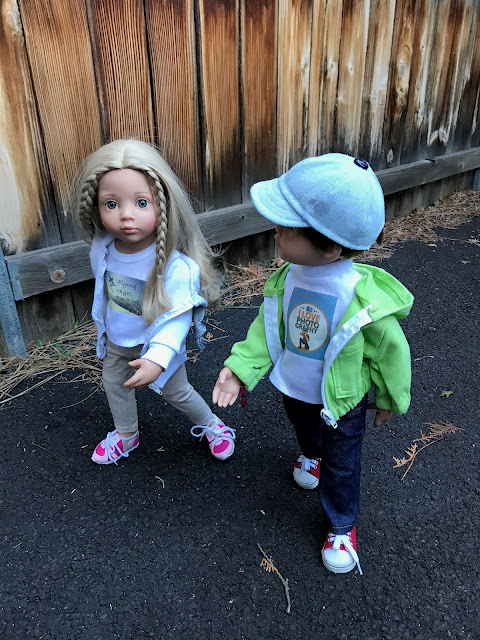 What's on my iPad/iPhone: Still Blowout by Rachel Maddow. It really is interesting, but I've been busy with other things.

What's in my wine glass: Terra d'Oro Aglianico, 2016, which was a bad year for us but apparently a good year for wine.

What's my tip of the week: With the threat of the coronavirus looming, we are wondering how to protect ourselves. A public health official said in an interview this week that the best defense is to wash your hands. She said that it's amazing that someone will go around with a mask on in public place, then use door handles and follow up by using their hands to eat without washing them first. Hand sanitizers protect you from bacteria (which is good), but not from viruses, like influenza and the coronavirus. She says to teach yourself not to touch your face if you have been out in public until you wash your hands. Influenza is dangerous, too, so don't wait until the new virus gets to your part of the world.

Janet, we had something similar in Park City.

Irene, it can’t be messier than my workroom right now. I just finished the photo shoots for Friday’s story, and clothes and props are everywhere!

I'm with you Peggy on the housework. My sewing room right now looks like a bomb struck it. I'm pulling fabric from my stash to start making more quilts for my family. Every flat surface is now piled high.

Another enjoyable blog Peggy.  The First Friday sounds like fun.  A lot of the merchants near downtown Las Vegas did that  years ago, but I don't know if they still do.

Irene, I try to avoid housework as long as I can.

I love the Victorian outfit you made for Billy and the way you posed the girls taking a walk. You certainly don't let any grass grow under your feet. Between making clothes for the dolls and knitting and going to those fabulous events and walking your dogs when do you find time to sleep. lol  Your cupboards are pretty and the handles look nice on them.