High Fiber—She Did It Her Way

My friend Joanie crossed over the Rainbow Bridge Saturday night. 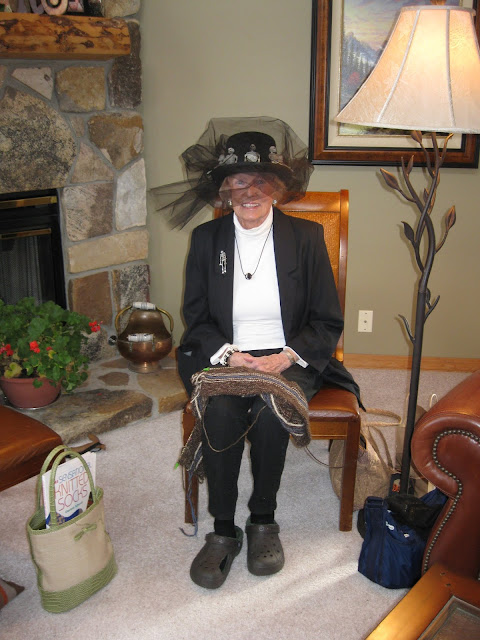 (Yes, people cross over the Rainbow Bridge, too, not just pets. Otherwise, how would we find all our pets when we get there?)

Joanie has been my friend for the past nearly 18 years. I'm sure everyone who ever met her considered her their friend, too. She had a way of making people feel that she was interested in them and cared about them, and she made people want to spend time with her, too.

My friendship with Joanie started when she showed up on my doorstep right after we moved into our condo in Elk Run, right across from hers, in September, 2000. She came with a basket of goodies, including Moose Poop (better than it sounds).

She told me later that she hadn't included a bottle of wine because we might be Mormon--this is Utah, after all. Joanie and Ev's windows looked down into ours, and she could see everything that went on in our living area, she told me later. As she watched us uncork a new bottle of wine every night, she decided we probably weren't Mormon.

Over the next few years we shared a lot of adventures. I'll never forget how much fun we had. In many ways, we were very different, but that only added to the fun.

We discovered quickly that we shared interests in the fiber arts. We were both knitters, but Joanie was also a spinner and a weaver, and I was a quilter. We shared our passions with each other. Eventually, because of her, I learned to spin and weave...in fact, she talked my husband into buying her loom for me, so I'm now a weaver, too. 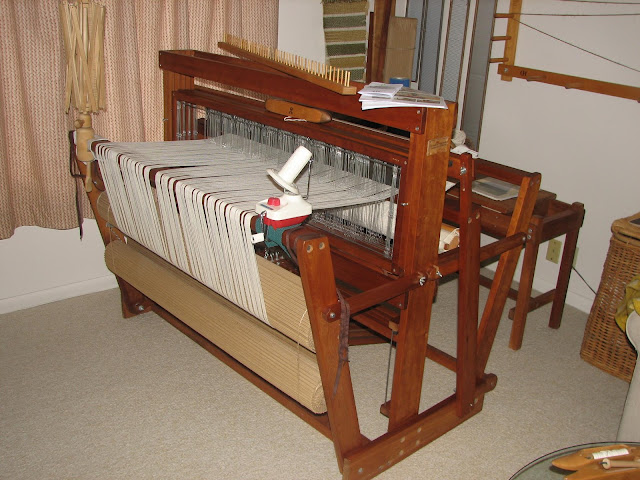 I have thought of Joanie every time I've sat on that bench to weave and will do so until the weft and warp of life is done. Or they cart me off to someplace without Joanie's loom. If I'm not kicking and screaming, then it probably doesn't matter, but then the loom will go on to a new weaver.

Joanie and I did a lot of knitting together, including making "Sam the Ram." 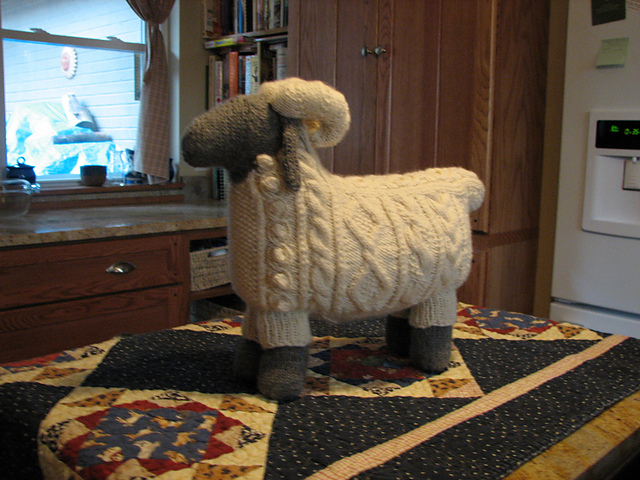 We were both intimidated by the pattern, so we decided to work on it together. Joanie usually came to my house for these sessions. I would read the directions from the pattern for the part we were on, and we would knit that section. We called ourselves the "Sheepish Ladies."

Sam had a seed stitch pattern across his chest. It's pretty much like ribbing, (K1,P1) across. I knit Continental style, so it went fast for me. Joanie knit English/American style, so she had to move the yarn front-to-back and back-to-front after every stitch, which is much slower. When we got to that part, I would get to the end of my section and go put the kettle on while she continued. We always laughed about that. It wasn't a race. We adapted to each other. That project taught me how to read charts. At some point, everything fell into place. If I hadn't had to figure it out for Joanie, I wouldn't be doing the knitting that I'm doing today.

The horns were complicated, but we got them done. Then it was time to stuff Sam. Joanie found someone she was able to talk into giving us some real fleece from some white sheep for the body stuffing. We were afraid the white should show through the darker head and feet, so I provided some poodle hair (almost the same as sheep, I think).

Joanie introduced me to crafts I knew little about, like Scherenschnitte. (I think that's what this is.) 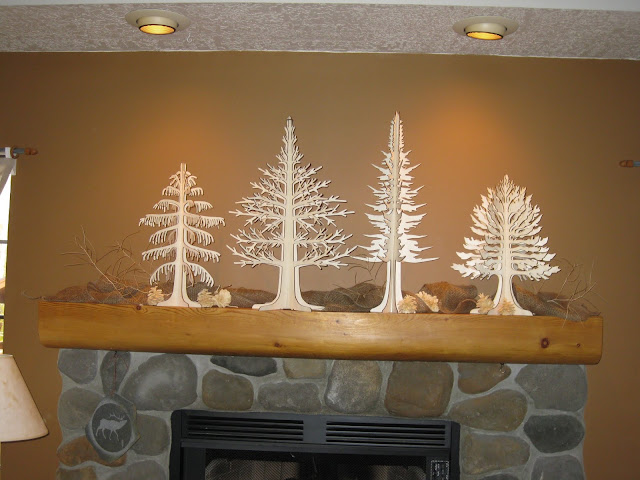 One of my most treasured gifts from her is this piece. 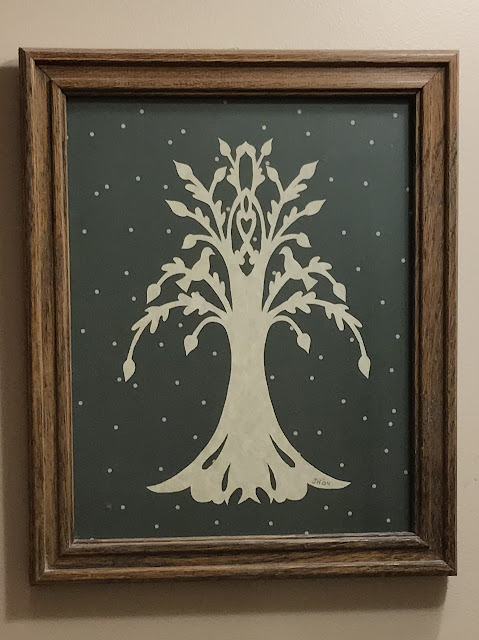 It will hang in a place of honor in our new home, as it has in the one we're leaving.

Joanie joined the groups I participated in, Vintage Stitchers and Common Threads. She always had something to share, like this porcupine (or a seal, or a bat). 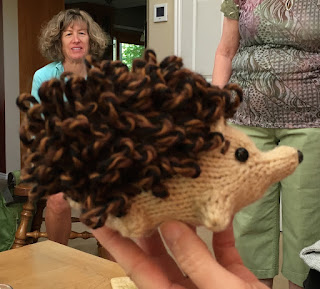 And she often was inspired by a friend to take on a new project. 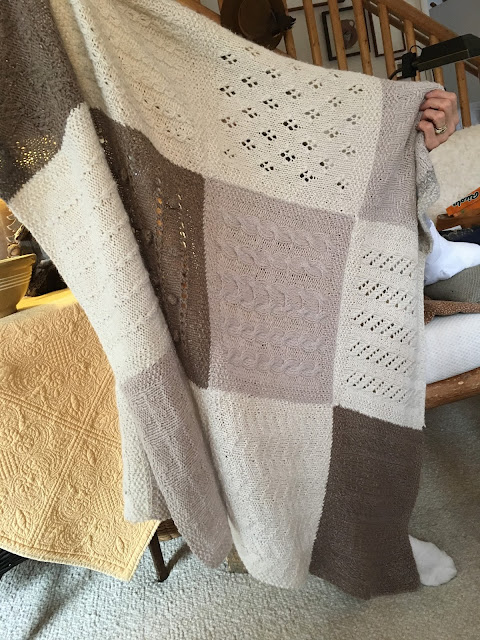 Her eye for design showed up in everything, such as this quilt, which we worked on together, paper-pieced pine trees. 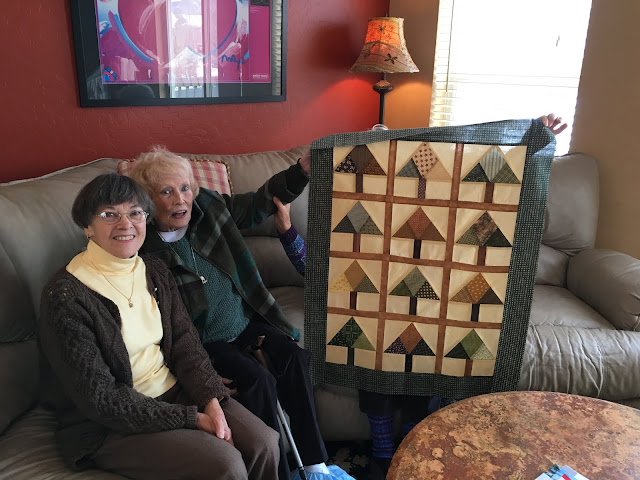 Here it is, on the wall, which she made me measure when we were designing the quilt: 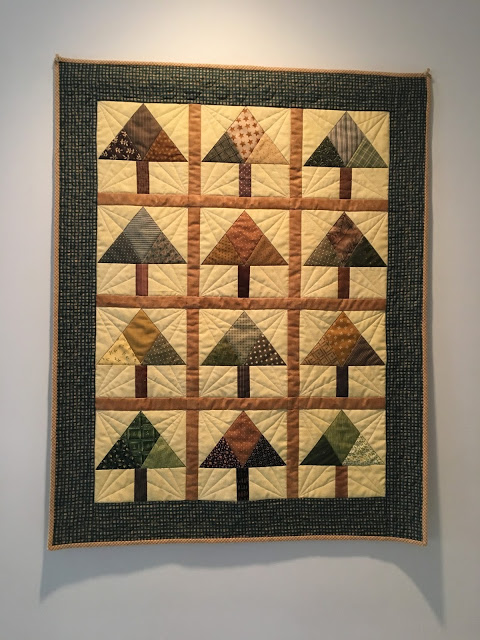 (Quilting was done by our mutual friend Julie, who also helped with the piecing.) It was a fun group project for the handful of us who helped her with it.

My friends became her friends. We attended her parties, like her Halloween Spooktakular, where we became acquainted with other friends of hers...many of them, anyway. 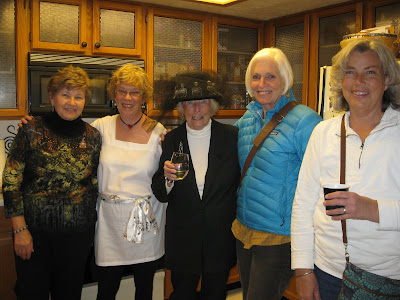 Or we went out to breakfast, a special birthday treat. Joanie knew all the best places to eat. 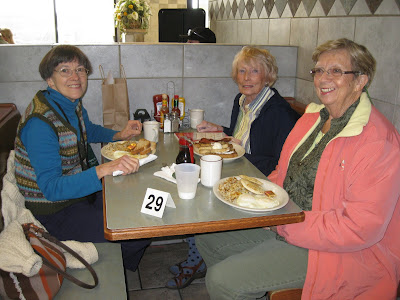 Then there was her wonderful 80th birthday party at a friend's house. 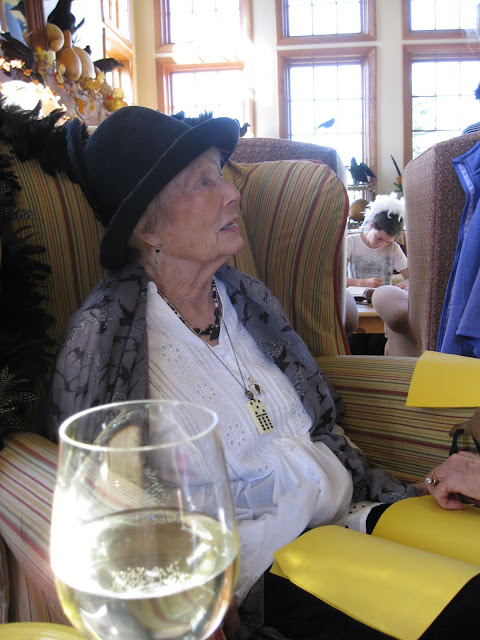 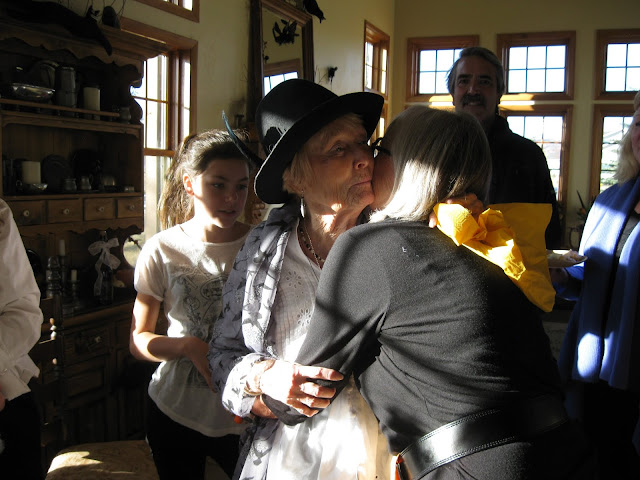 We shared an interest in antiques and went to the Acorn Antique Fair in Ogden a couple of times a year as long as she was able. We would stop for breakfast at Morgan, then drive on to the fair. The last time we went together, we found that she wasn't the only one being wheeled around. 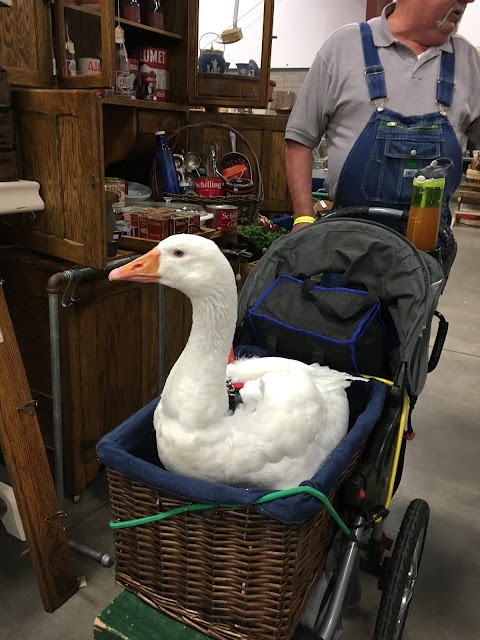 We would have lunch at the train station and then wander through the shops, sometimes ending up at the Needlepoint Joint or Shepherd's Bush before heading home. Occasionally, we would stop on the way home for dessert at Taggart.

I'll never forget the time when we arrived in Morgan for breakfast, only to discover Joanie didn't have any money. At all! She had left her purse at home...but she had her knitting bag with her. I paid for our breakfast, but when she found a Navajo rug at the fair she "had to have," I put it on my credit card. ("Charlie won't mind. He will like the points," I said.) She gave me a check when we got home. I always asked after that, "Do you have your purse?" And we would look at each other and laugh. (The rug turned out to be a good buy.)

Joanie also had a wonderful sense, knowledge and understanding of design that carried over into everything she did. She taught me to embrace neutrals and order, and I hope I brought a little bright color and some spontaneity into her life. For instance, this is her fiber studio: 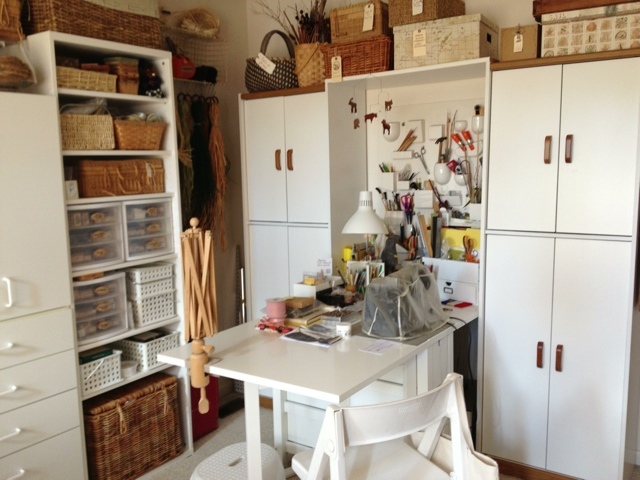 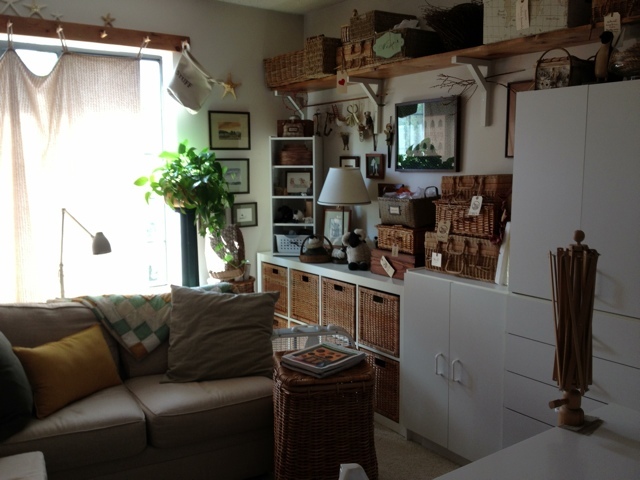 And this is mine. I do have an "after" photo, but this is about my friend.

Joanie could always make me laugh. I hope I did the same. After our puppy had a second close call with wild-mushroom ingestion requiring another quick trip to the vet, Joanie gave me this book. 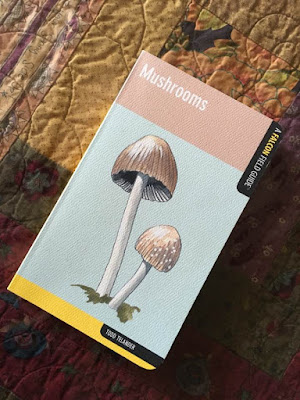 We shared this love of animals. She loved my animals and I loved hers. My gift to her one year was a framed photo I had taken of her sweet kitty, Kasha. 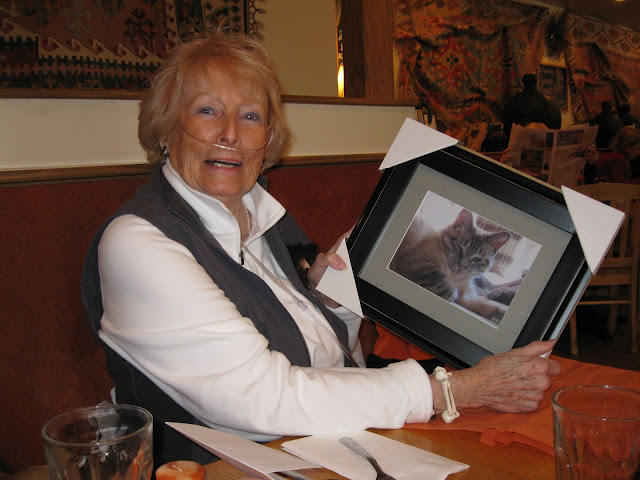 Joanie wouldn't be bullied or pushed into doing anything she didn't want to do, although--to me at least--she always seemed to finesse the situation so everyone ended up thinking they had had their way or thought she was right. When the time came that she was unable to climb the stairs, Joanie installed chairlifts on each of her two stairways. When she was unable to care for herself, she hired Ana, who also became a friend. Oxygen tubes went everywhere. She didn't want to leave her home. The few times she was in the hospital, she just wanted to go home. She went home and managed to stay in her home until the end.

Thank you, Joanie, for being my friend. You have enriched my life.

I am so sorry about your friend--and found your tribute to her absolutely perfect.

Absolutely. I will treasure the memories!

It is never easy to lose a friend, especially one like her. She definitely lived life. You were very lucky to have had her so many years. Thank goodness for memories! Smiles....

Thanks, Jan. Vintage Stitchers members have all read it. They need it, too.

Lovely tribute, Peggy.  Setting those feelings down in words can be very healing.  My condolences.

Yes, thanks, everyone. I will always feel blessed to have had her in my life, and it was therapeutic for me to write all this.

A beautiful tribute to your friend. I feel like I know her so well! My sympathy to you for the loss of this beautiful woman, but oh what great memories you have of her.

What a wonderful tribute to your dear friend.  Throughout our lives people come along that make our lives richer, and make us feel like a better person for having known them.  Joanie sounds like that kind of special person.  My sincere condolences on your loss.

Peggy, my sincere sympathy to you and all who loved Joanie. Your tribute to her brought tears to my eyes. I know you will treasure the memories you two made together.