We received a lot of snow this past week. 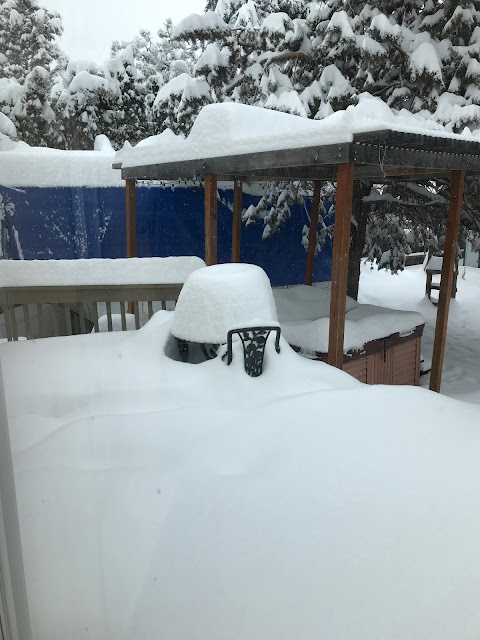 Much of the snow came on Monday, although we had a little snow every day. Supposedly, this was the most snow in any 24-hour period since 1917, so more than 100 years. 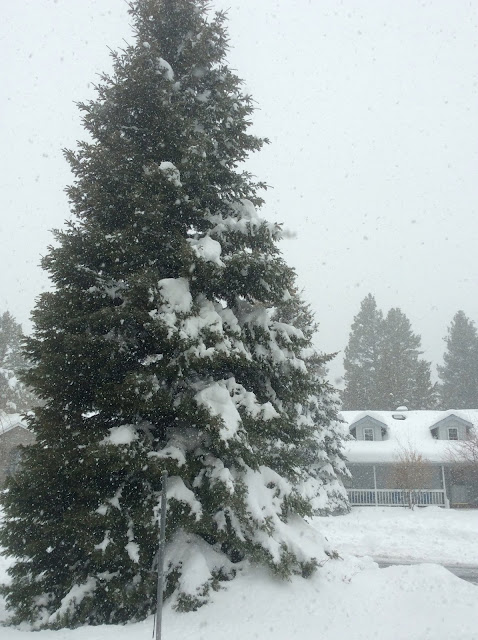 Park City, where we used to live, got about the same degree of magnitude more than usual as well. We left there to get away from the constant snow, so as bad as it is here, it would have been much worse there, and we got out just in time. 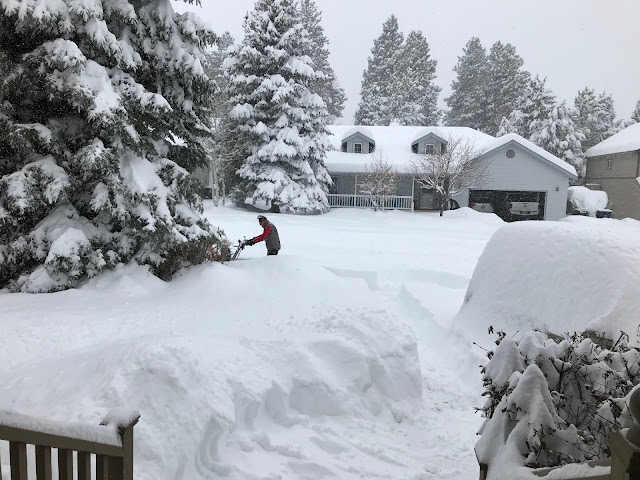 I took advantage of the snow to write a story for The Doll's Storybook dealing with too much snow and with disappointment. Strangely enough, the title is "Snow." I had already written one, but thought it would be better for next week. Here's a preview: 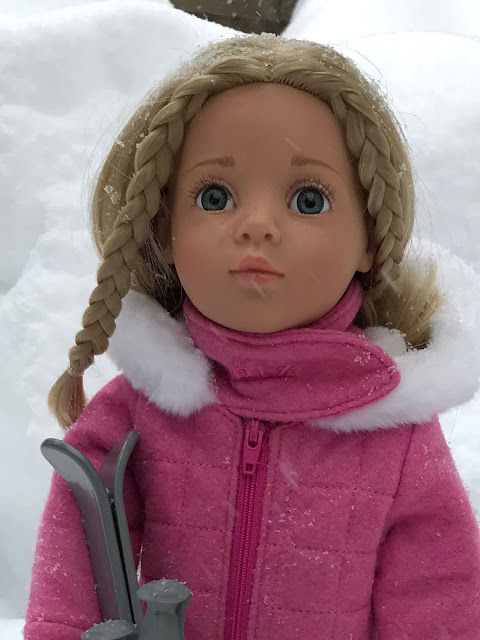 With next week's story written, I'm free to enjoy the Rose City Yarn Crawl later this week.
I blocked my new shawl, which I'm calling The Peanut Butter Cups Shaw. It's the Mystery Knit Along project for this year's Crawl. (The pattern is available for $7.50, and there is one for crochet, as well.) I used my 12 1/2" quilting square ruler to help me line up the blocking wires, so my 90º angle would be 90º. 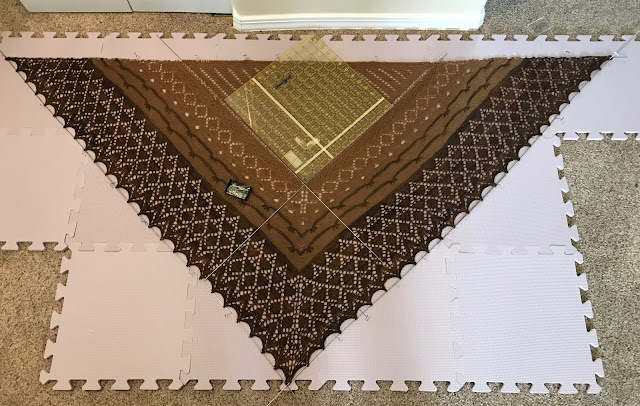 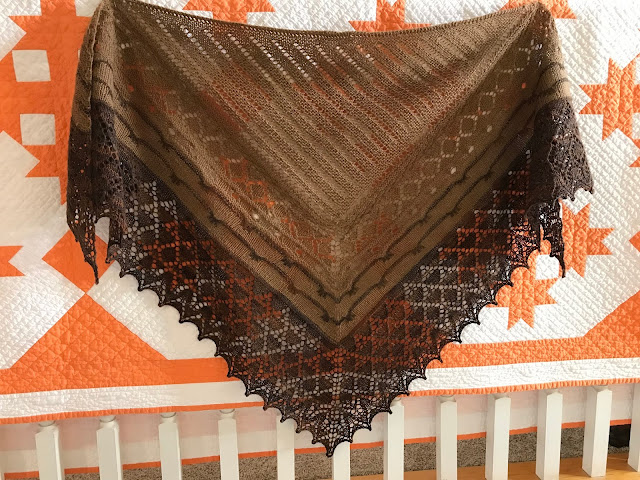 We are supposed to wear our shawls as we visit all the yarn stores in the Portland area. I plan to do that, if we can get to Portland. We have one mountain pass we have to conquer to get there, and more snow is predicted.

We also plan to visit Laika while we're there. It isn't open to the public, but our son works there, so we count as family. It will be fun to have a tour. If they allow photos, I'll take some for next week's blog.

Because Daddy works at Laika, the two west-coast grandsons went to see The Missing Link on Saturday. It comes out in April, but Laika employees and their families get a sneak peek. 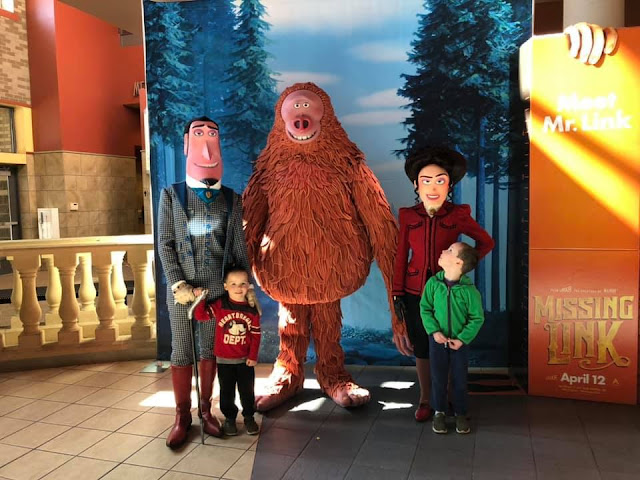 The Götz Doll Lovers group on Ravelry is having a knit along for the month of March. Jacknitss, one of the designers, had a special sale of her patterns to celebrate her birthday. I picked up three patterns. I don't know if I'll get them all done this month, as there are other things going on this month, too. This is the one I'm starting with. There are three options for the skirt, and the one I'm doing is a tiny cable design. It's the one on the far right. 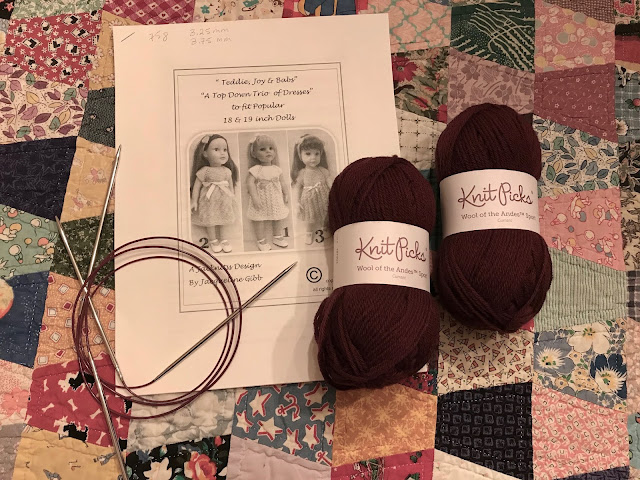 These projects are quick, and I'm getting close. 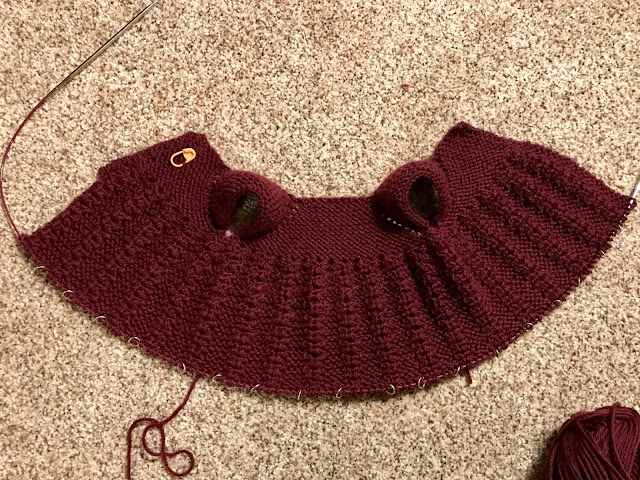 While I was busy with snow, a dentist's appointment and knitting projects, there was a hearing in DC. I watched when I could, but when I had to leave my iPad to do things, Dusty was on duty. I told him to bark if there was something I shouldn't miss. I heard some occasional growls, but no barking, and he wagged his tail a few times. Based on the news coverage, I think I got to see all the highlights. I was knitting, so I didn't mind that his head was in the way. 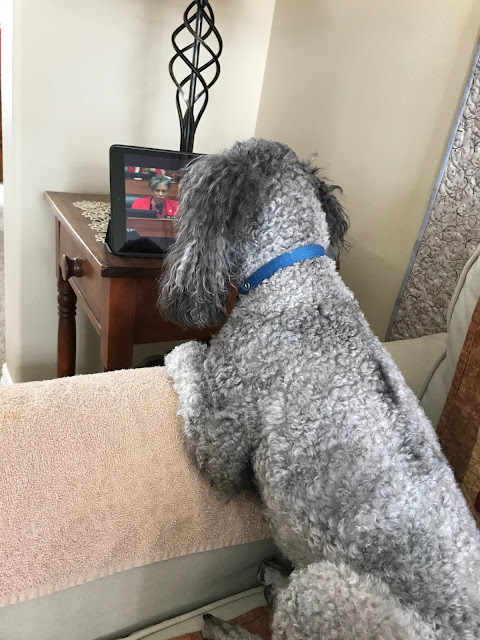 It's always interesting to see our government at work or trying to work.

We ended the week with snow and woke up Sunday morning to hoarfrost. 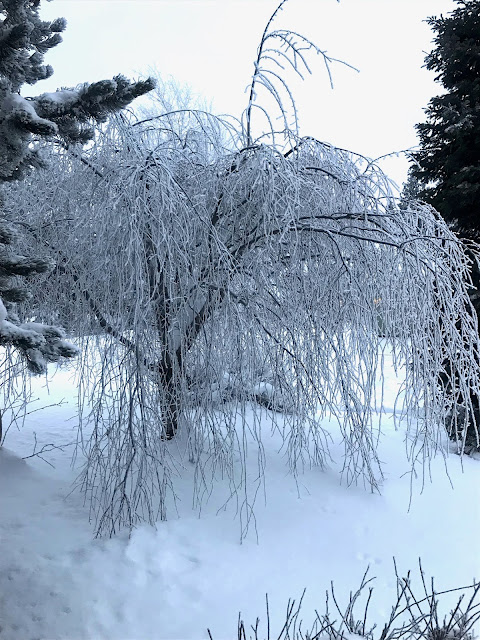 It's beautiful, but very cold and damp. It happens when the moisture that has settled on vegetation and other things freezes. 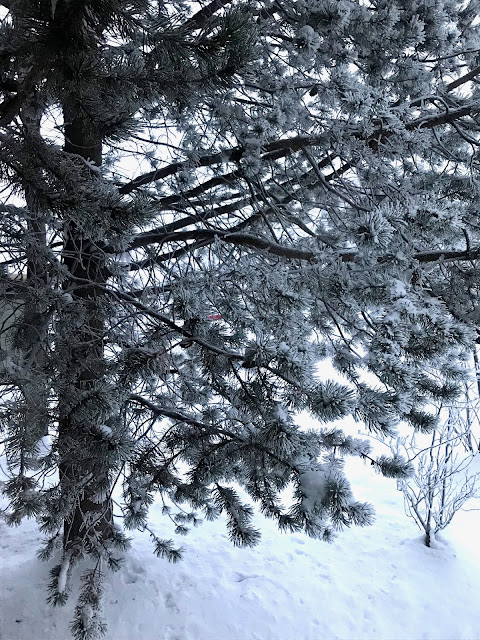 It took two of us working for 15 minutes with two ice scrapers to get the car windows clear Sunday morning. It sure is pretty, though. It doesn't show up as much on the Juniper trees in our backyard because they are currently loaded with snow, but the other evergreens (pines, firs) really collected it. 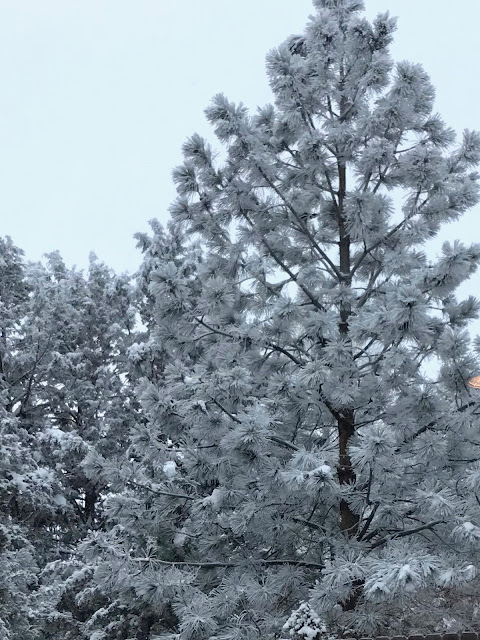 I think Punxsutawney Phil lied about an early spring.

Daphne is selling Girl Scout Cookies. If you want to support the organization, you can buy and donate the cookies to the Ronald McDonald House. Her link to cookie sales is here.

What's on my needles: Finished blocking the Mystery Knit Along shawl for the Rose City Yarn Crawl. Now working on some outfits for my cast members.

What's on my sewing machine: More clothes for the cast.

What's in my hoop: Still the Spring Flowers quilt. I hope to get back to it after the yarn crawl.

What's in The Doll's Storybook: Snow.

What's on my iPad/iPhone: Then listened to Holding: A Novel by Graham Norton and narrated by the author. It was an Audible Deal of the Day. It was good. Now listening to The Wizards of Once by Cressida Cowell, who wrote How To Train Your Dragon.

What's in my wine glass: Muchas Manos Merlot-Syrah-Tempranillo from La Mancha. Possibly one of my favorites.

What's my tip of the week: You can "install" buttons when you knit if you have already picked them out by knitting them in. Here's my description on how to do it from a project where the buttonhole and button bands were knitted as part of the project, with three sts in garter st at each end: "Buttons are knitted-in this way (like adding beads): On the same row as the buttonhole, work to garter st border (last 3 sts), K1, pull a loop of the working yarn through button from back to front and then again from front to back. Place the loop on the left-hand needle, being careful not to leave a YO across the right-hand needle and keeping the button in the front of the work. Knit the loop together with the next st. (I found I sometimes needed to pull on the working yarn to tighten at this point.) End with K1. There were still 3 sts of garter st border. Work back across row as usual. One point: If you ever need to change the buttons for any reason, you will have to break the old ones to get them off."

Irene, all of the posts are there, if you want to catch up. I would love to have a flower garden. I'm not much good as a gardener, but we used to have a vegetable garden. We hope to do that again here.

I was off line for a month and missed your posts.  I love that shawl. You do such beautiful work. We have plenty of snow here but not as much as you folks got. In a few weeks the snow will be gone here (hopefully). I'm looking forward to working in my flower garden.

When we lived in Casper, the wind used to blow the snow away.

What a beautiful  shawl! We are having winter now in Wyoming. It looks a lot like yours.

Thanks, Pam! It was fun.

Marianne, April should be very nice in New York and Pennsylvania. It will probably even be nice here. I've heard from others about the mild winter you've been having.

Wow Peggy, that snow is beautiful, I think u have had our share, it's been a very mild winter so far here in UK,  hope we don't pay for it with a poor summer.  We r going to New York  and Pennsylvania in April, hope weather improves.  Your shawl is beautiful and the dolls a sheer delight. Love hearing your news. Ttfn Marianne UK

Janet, I join you in that wish, along with your hope that we've seen the end of snow for this year.

Loved reading your weekly blog this morning Peggy.  We had another batch of snow & ice this weekend.  Sure hope this is the last one!  Makes me wonder what the rest of the year will be like.

Dusty looks like he took his iPad duty pretty seriously.  We listened to as much as we could, but we also had appointments to attend to.  Time will tell how this will all come out, but I sure wish it was sooner rather than later!

I love your shawl.