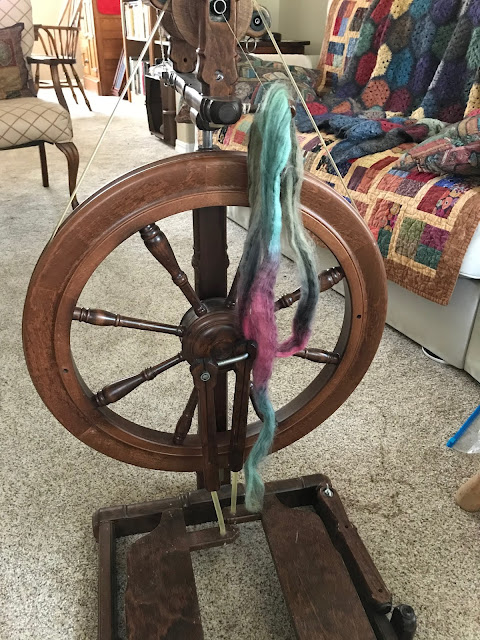 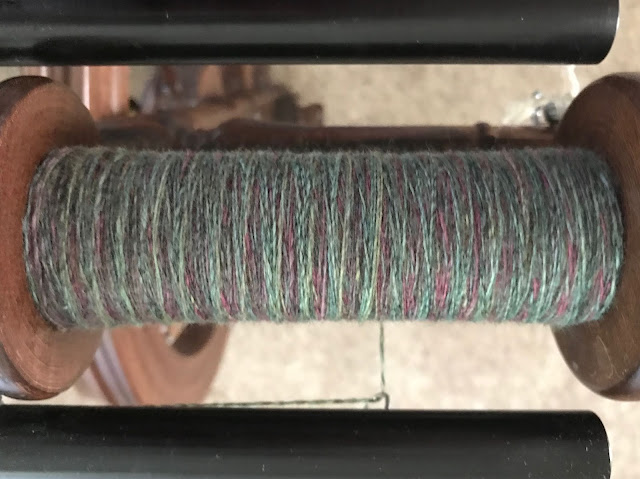 I had to leave the wheel at home when we went to visit the Beaverton kids for the weekend. I took my drop spindle with me and managed to spin each day we were there. I'm using my Golding Tsunami drop spindle and this Ashford merino and silk top roving I started a few years ago, before I got my wheel. 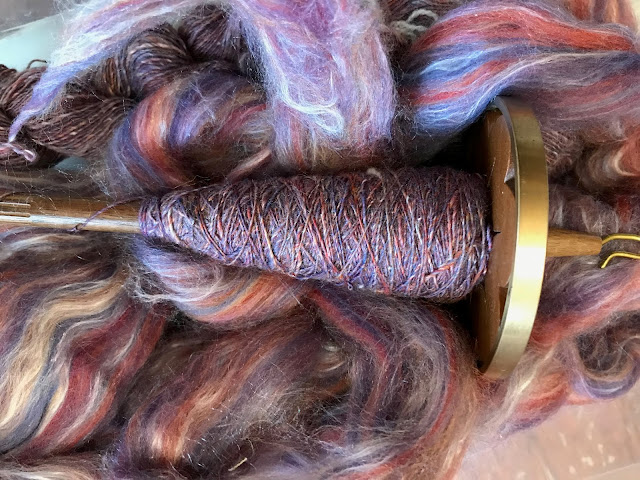 Jolena received a new dress during the week using the fabric she picked out at The Stitchin' Post in Sisters during the quilt show. With it, she's wearing a pair of the new shoes we received from FairyTaleLOVEit on Etsy. The owner lives in the Ukraine. The shoes and clothes are expensive, but they are very well made and cute. 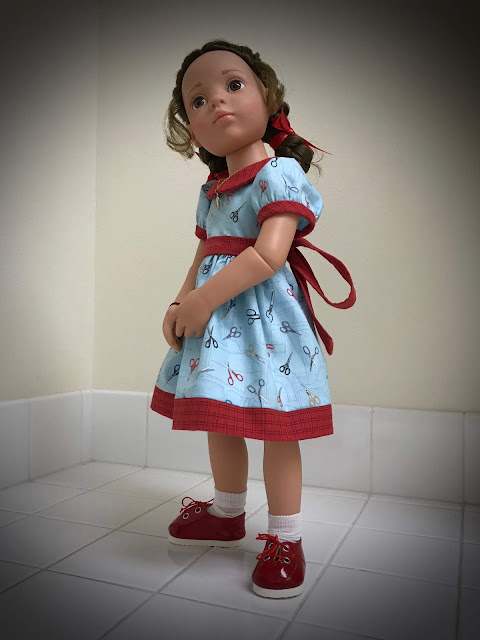 One reason we picked this week to go to Beaverton, which is close to Portland, Oregon, was to visit the Portland Highland Games in Gresham. DH decided to wear his kilt and everything that goes with it. I made these kilt hose in 2011 after taking the class with Mary Scot Huff at the Sock Summit. This is the first time he worked them. 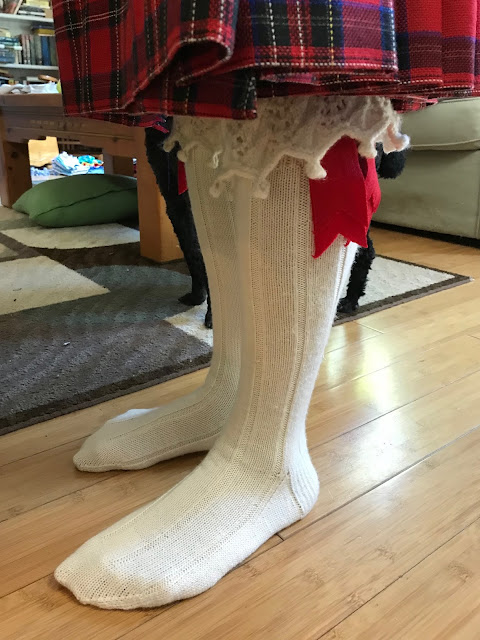 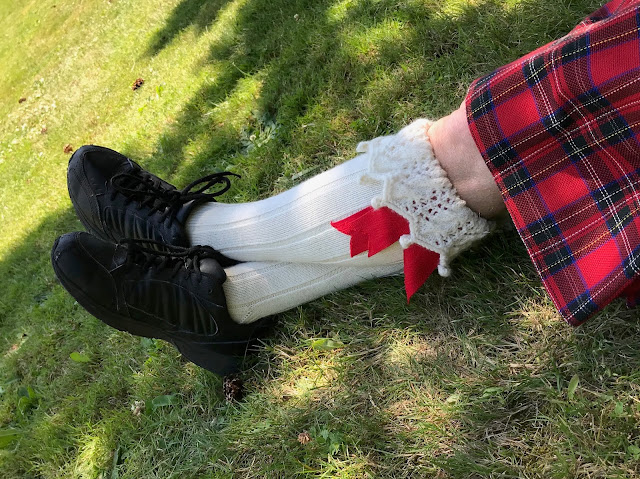 Our son and his boys also dressed in kilts for the games. It was easy to spot them coming. Very few children wore kilts to the games. 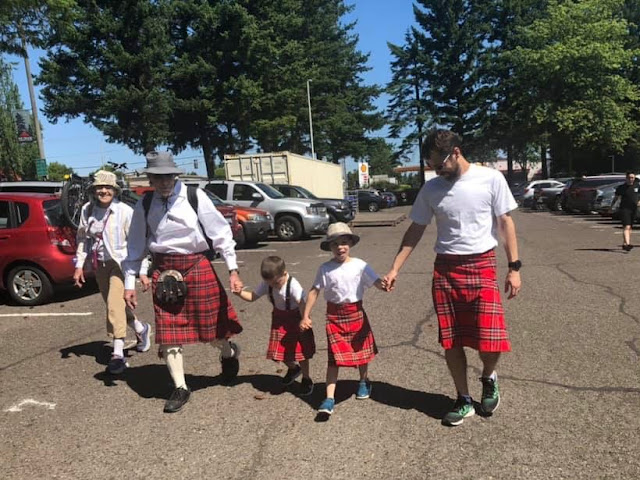 During the opening ceremonies, we were entertained by a bagpipe band. 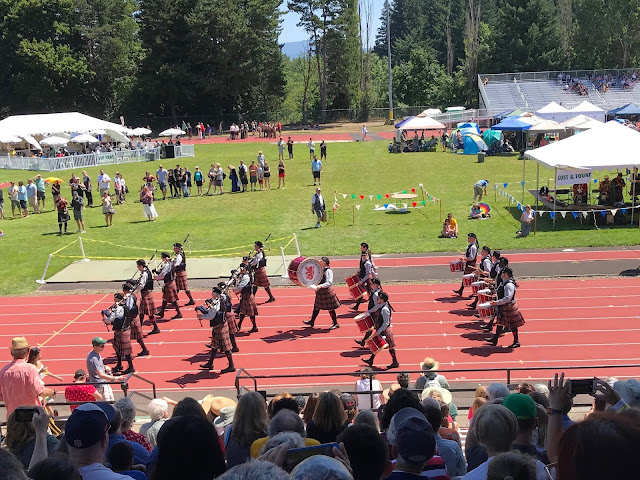 There were a lot of interesting competitive events, such as the Kilted Mile, a foot race for men, women and children. (I believe the children's event was just one time around the track. 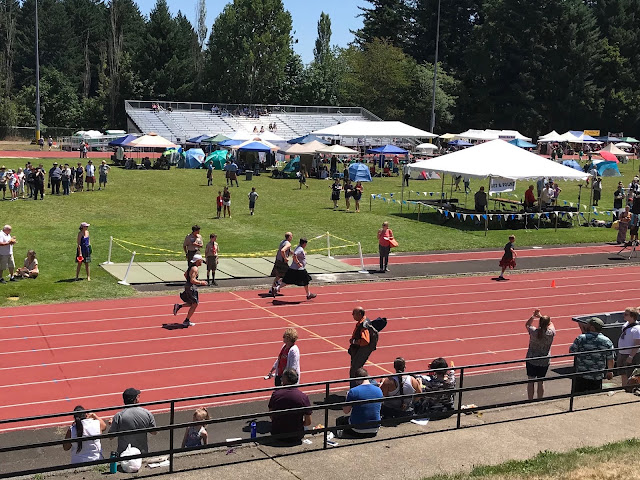 We watched the men's Caber Toss. They have to get a long log-shaped piece of wood balanced and then toss it so the top hits the ground first. Then they are successful if the other end lands between 9:00 and 3:00 from where the tosser is standing. 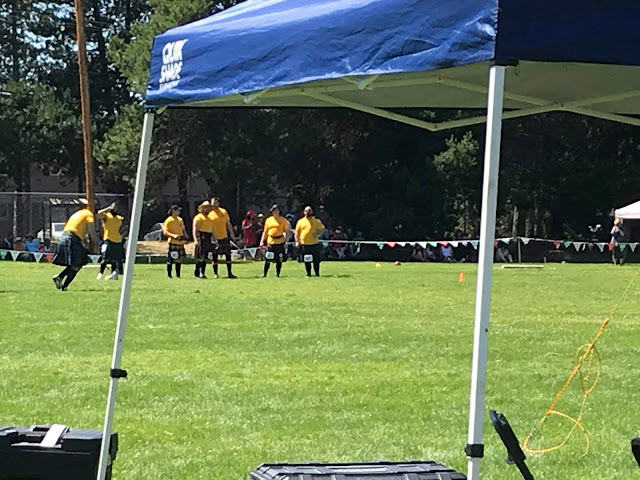 We left to watch the kids participating in their own versions. This our grandsons' cousin Leo tossing the caber. He was good at it. 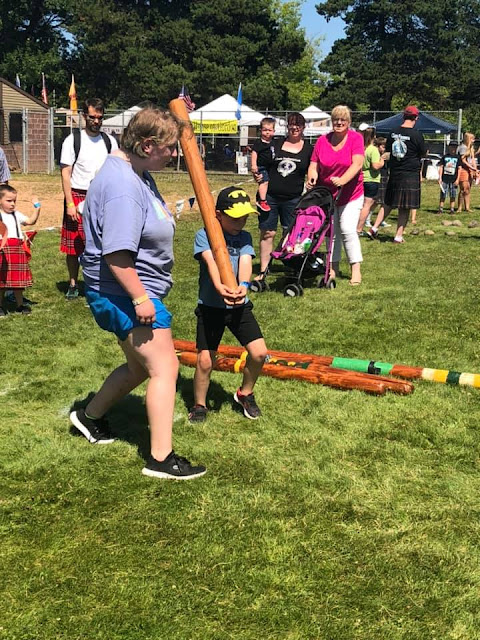 Johan did well at the stone toss. 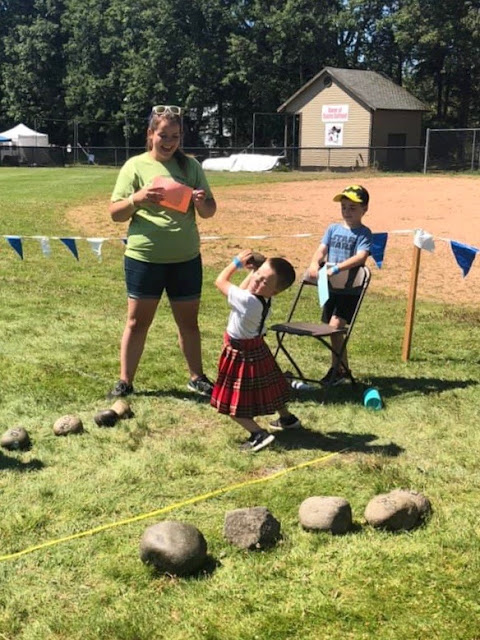 Soren is a good runner. He did well at the Farmer's Walk. 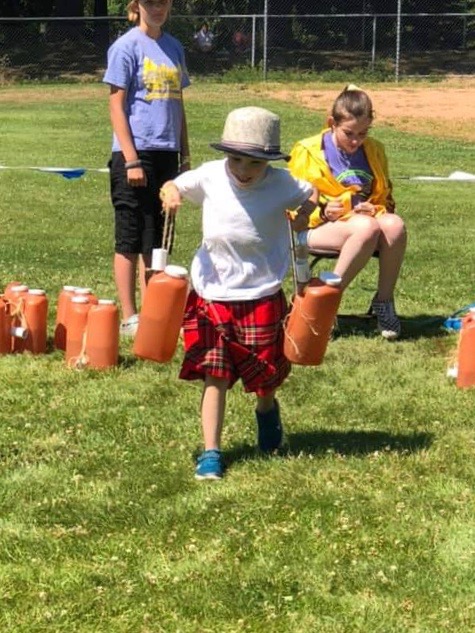 Johan also medaled in the sheep toss. For the kids, they used a stuffed animal sheep with the stuffing replaced by rocks for weight. (If you look over the pink tape in the photo, you can see the sheep flying through the air, well over the tape.) 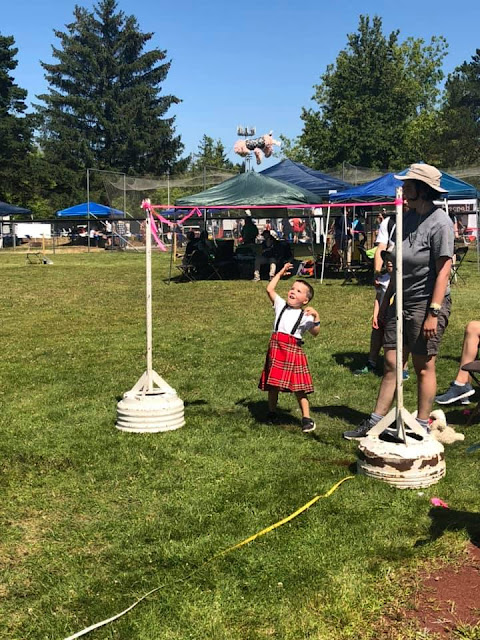 We went to a local park on Sunday so the kids could play at the splash pad (which they call a spray ground) and the playground. Then we went out to eat. DH and I stopped off at Noble Woods Park for a walk with the dogs before going on to watch the kids at 53rd Avenue Community Park.

The pups went to the groomer on Tuesday, a few days before our trip. Here they are, enjoying their post-grooming stupor. 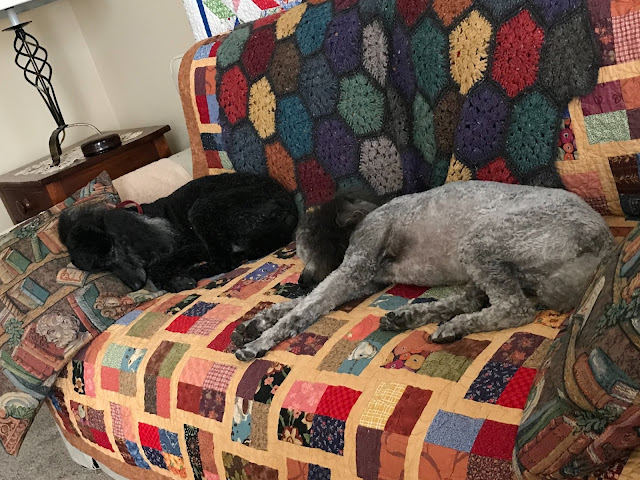 The sunflowers along the Larkspur Trail are beginning to bloom. Soon we'll be back to walking the trail. 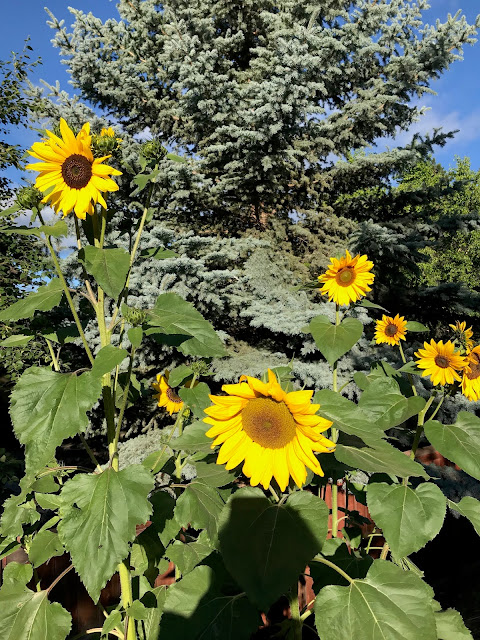 We're on the road today. It will be good to get home.

What's on my sewing machine: Costumes for the dolls.

What's on my iPad/iPhone: Finished The Flirt by M. C. Beaton. Now listening to Cadenza by Stella Riley. We also listened to more of The Rise and Fall of the Dinosaurs by Steve Brusatte while driving.

What's in my wine glass: Grifone Primitivo from old vine Zinfandel 2017 vintage. We found it at Trader Joe's. A good buy for a nice wine.

What's my tip of the week: If you can figure out a way to do it based on how your dishwasher is configured, you can sort the cutlery as you put it into the dishwasher rather than as you take it out. It's much faster, because you usually put the various items into the dishwasher one or a few at a time and taking them out all at once. It does take training family members, though. You will have to make the decision about whether the training is worth the effort.

Busy, busy, you are still so productive. Love seeing the little ones in kilts.

Thanks, Jan. No quilting this week, but I'm always busy.

Great post as always.  Read it every week, and enjoy the pictures and the doll adventures.