Our campsite was pretty private for the first three days of our camping trip. 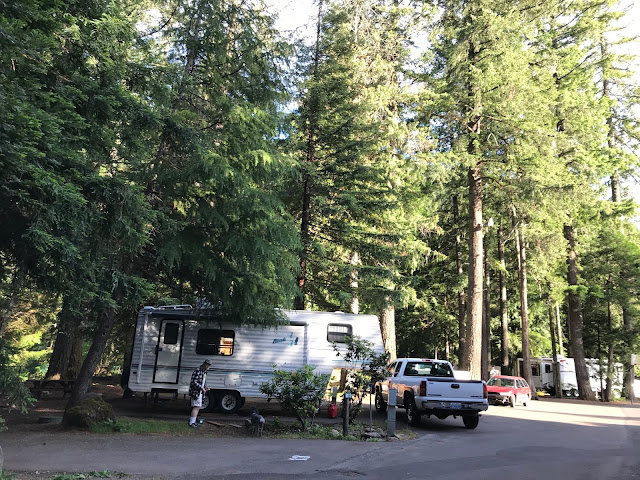 We were hooked up to everything but sewer at Belknap Hot Springs and Gardens located on the McKenzie River in Central Oregon. There are flowers everywhere, especially rhododendrons. (That pagoda statue is leaning.) 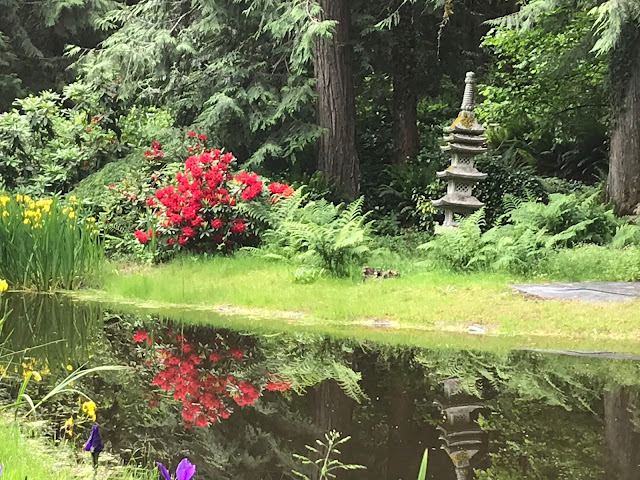 The favorite color seemed to be red. 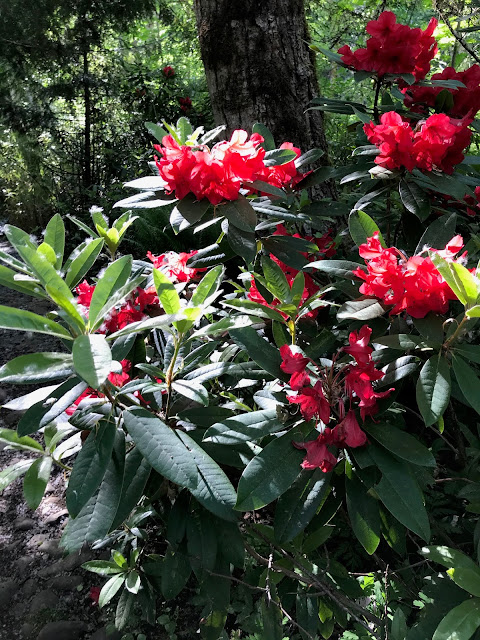 A special area of beauty is the "Secret Garden," which is enclosed by walls. 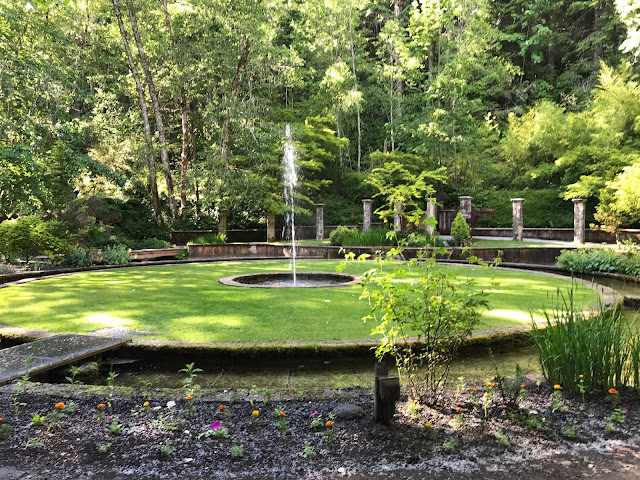 There were several water features in this more formal garden. 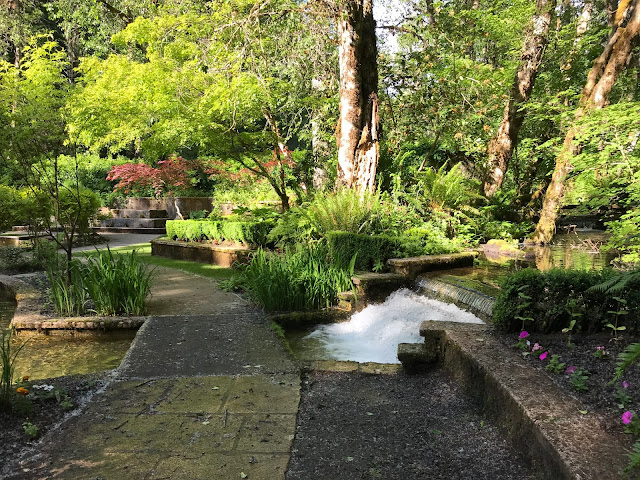 The resort has a number of hiking trails within it, but its location right on the border of the Willamette National Forest adds miles of trail access right from our campsite. 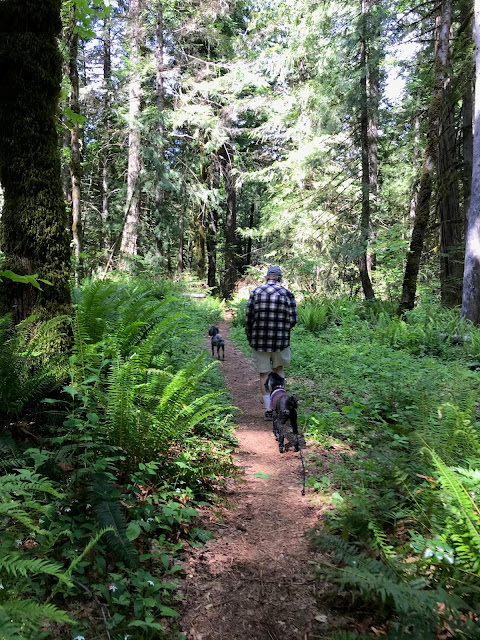 The dogs had to be on a leash, but I let go of Rocky just long enough to get a photo of my boys, hiking. Misty's old retractable leash was in the trailer, so we gave it a try for Dusty, so he could have the feel of being off-leash, and it worked very well.

Some of the trails have access to water for the dogs. Because of his medication, Rocky is always looking for a place to drink, and both dogs enjoy playing in the water. 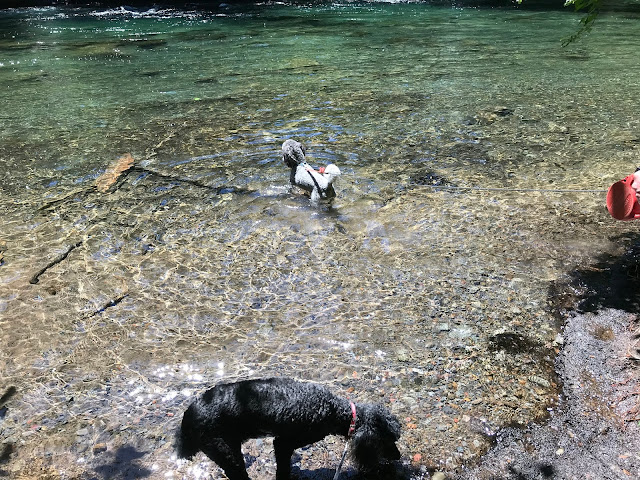 The McKenzie River is a tributary to the Willamette River. the current is too strong for the dogs to swim, but they had a good time wading or getting a drink whenever we found a beach at the water's edge where the water was fairly calm.

The river is big enough for rafting and kayaking, and some people were doing these activities, but formal groups were nonexistent because of Covid-19. 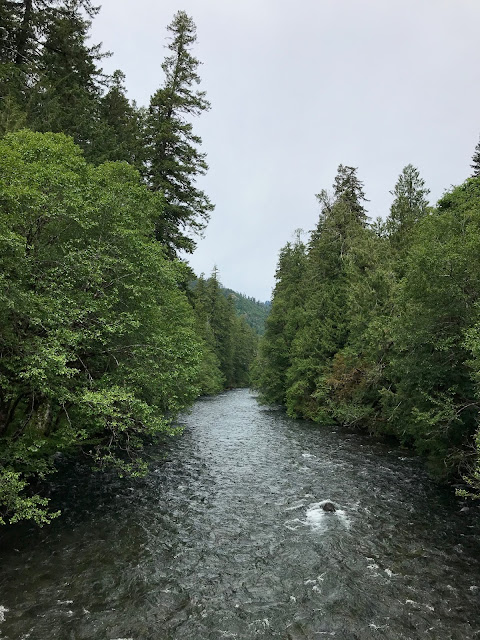 Large trees that had fallen in the forest had been cut to allow hikers to access the trail without climbing over huge logs. Sometimes Mother Nature stepped in to decorate for us. 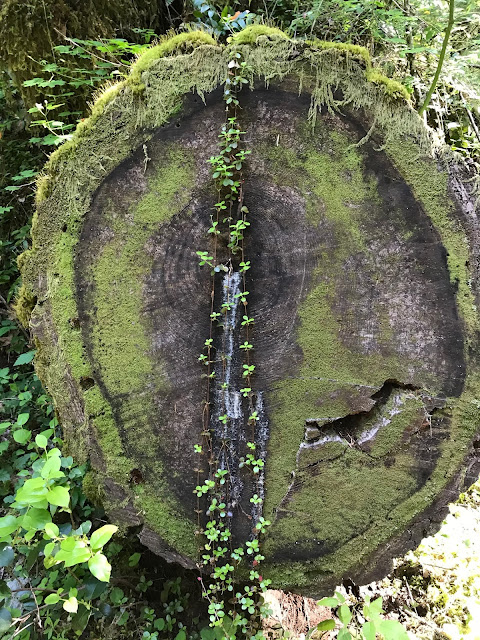 We saw a lot of mushrooms. This one was a nice specimen. Here you can see the gills on the underside of the cap. 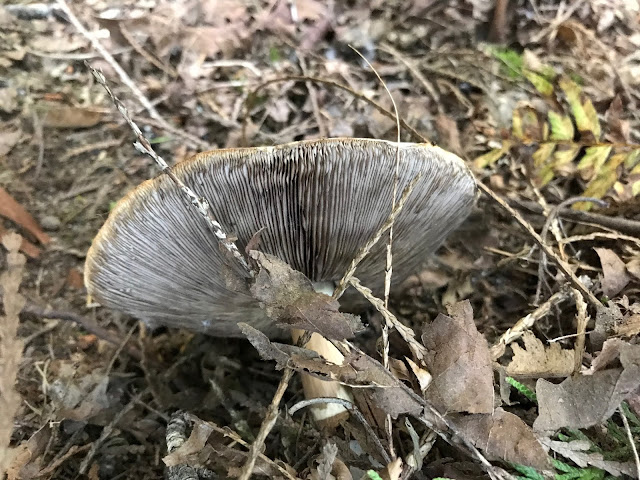 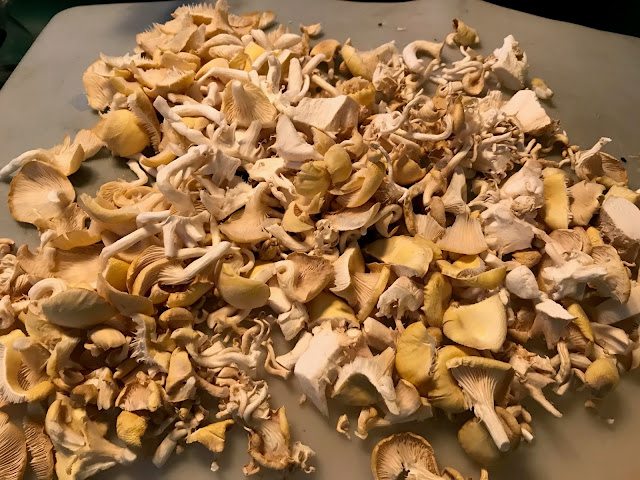 Sautéed in a little olive oil with garlic, some thyme, salt and pepper, a splash of white wine and finally a tablespoon of cream at the end, they were tasty. I cooked them all, but we didn't eat them all. They are best cooked right after picking the flush (mushroom talk for "harvest"), but cooked, they will keep in the fridge for several days.

Veronika and Emil went along with us. I was hoping to get some photos of them out in the campground, but by the time I was ready to do it, people had hooked up on each side of us. These campsites were very narrow. I had seen how casual our fellow campers were about social distancing, so I was reluctant to attract the attention of anyone, especially all the children running around, so the dolls stayed in the trailer. They got to see the outside though and seemed to find the campground interesting. 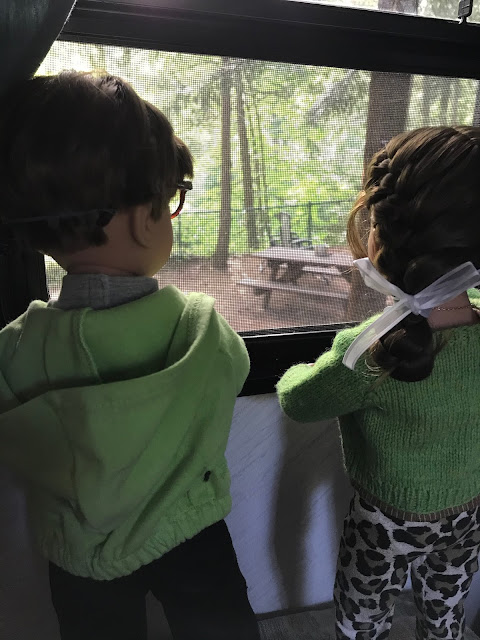 My "men" enjoyed sleeping in each morning. (The pups would get up early to potty and have breakfast each day, but then they liked to climb back into bed to curl up with Daddy for a nap until he got up.) 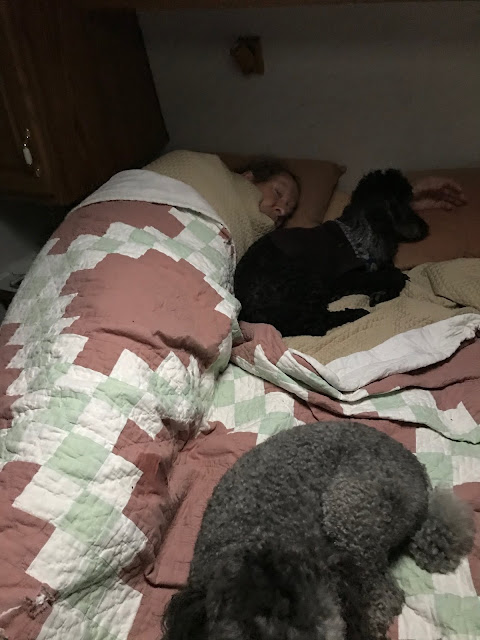 We hiked a total of over 16 miles in four days. It was great to be able to hike without foot or knee problems, although my arthritis acted up when I was at rest the first day, because of the cold. We had power, so I used my heating pad. The weather was lovely after that.

"Take nothing but photos and leave nothing but footprints" is what we practice, but I brought home a little souvenir by accident. I thought I just had a spider bite with a little scab in the middle, but it turned out to be a tick, and the culprit was still there. This photo is much larger than life-size, unless you're reading this on a very small screen. It measured just under 1/8." 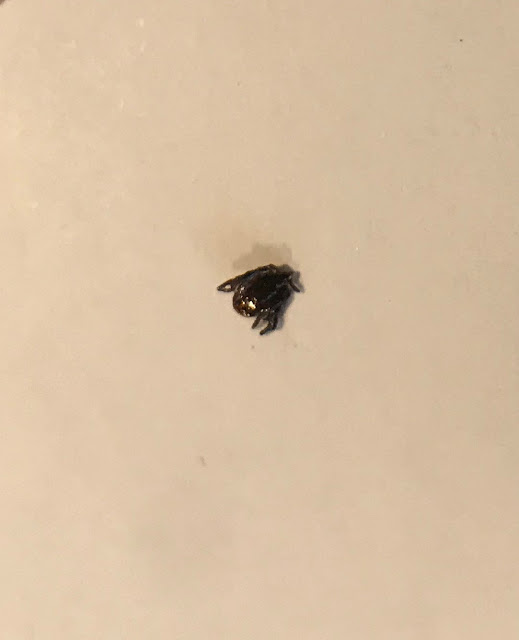 I had been putting alcohol and antibiotic creme on it. I'm guessing the alcohol killed the tick, so when I was treating it the day after we got home, it came off. Then I picked it up and had a look with a hand lens. That's when I saw that it had legs. The brown deer tick is a possibility, so I called the doctor. He was out driving near us, so he came by and made a house call (actually a porch call) to pick up the tick and have a look at the bite. He's going to try to get it identified, but he called in a prescription for antibiotic right away, just to be on the safe side. The swelling has gone down, so there is just a small red circle where it was. I expect all signs of my little souvenir to be gone in a day or two.

What's on my needles: I cast on the Jenny Pullover for Jolena using the Jenny Cable Jumper pattern from Dolls Boutique right after we got home from our trip. It starts at the neck. 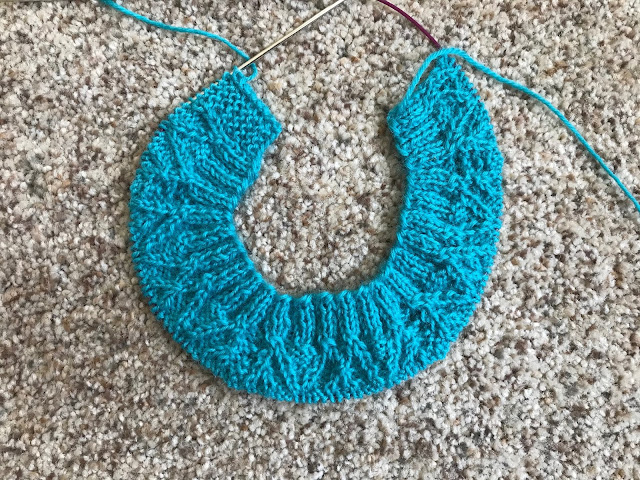 The Covid-19 Rewilding Shawl, which I was working on during the trip, is all done except for blocking and the tassels (if I choose to use them). 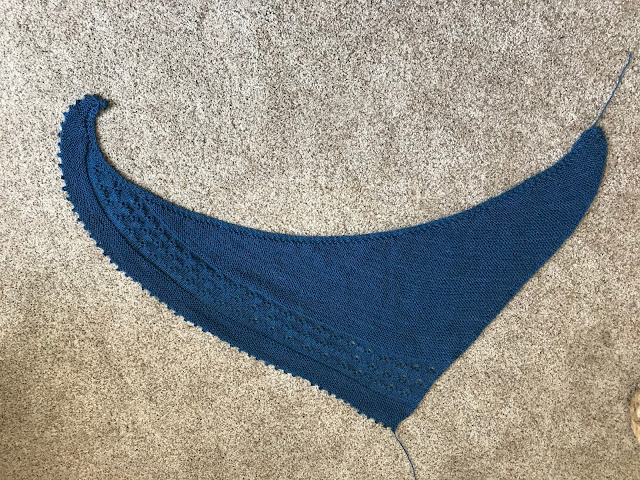 What's on my sewing machines: Both sitting idle for now.

What's in The Doll's Storybook: Mandy's Mushrooms. Mandy explains the difference between mushrooms and plants and how they are alike.

What's on my iPad/iPhone: The Ten Thousand Doors of January by Alix E. Harrow, a strange but interesting novel. I hate to put it down, but we've been doing things, so I haven't had as much time to listen as I'd like. I still have about 3 1/2 hours to go out of 12 hours and 20 minutes. I'm looking forward to finding out how it comes out.

What's in my wine glass: Atico Cabernet Sauvignon 2019. Interesting. Our first time to try this wine. We'll probably get it again.

What's my tip of the week: I've discovered that when you're growing sprouts in a quart jar, you can used just 1 T and almost fill the jar by letting them grow a few more days. Just keep rinsing them morning and night. It saves seeds, and I like the longer sprouts, too.

It sounds like you had a great time. (except for the tick.)

LOL! Maybe he wouldn't consider this "camping." (You can also show him the photo of our queen-size bed with DH and the dogs in it from this blog post.) Sorry the refrigerator doesn't show. What a beautiful area to camp in Peggy.  I have tried to talk my hubby in to buying a camper over the past few yrs, but he has no desire to do that.  Said he had enough camping when he was in the Army.  I sure hope you don't have any lasting bad effects from that tick.  They are nasty little critters!  Too bad the "kids" didn't get to enjoy the campsite as much as you had hoped.

Have you sprouted peas?  Let them grow to the first real leaves.

Carol Ann, we practice "catch and release" when it comes to spiders (which are often beneficial), bees, wasps and flies. Of course, a spider that's dangerous gets helped to a quick end, if he/she is in a place where the extraction won't work.

ICK!  a tick!  It's right up there with spiders at the top of my "disgusting insects" list!  It is good that you got an antibiotic from your doctor right away to stave off any possible infection!  I spent part of the weekend trying to coax/shoo a wasp out of our cabin in the mountains.  He was not have any, so I will eventually find his little carcass on a windowsill.  I definitely prefer wasps and bees to ticks and spiders!