People are starting to say their goodbyes to me. 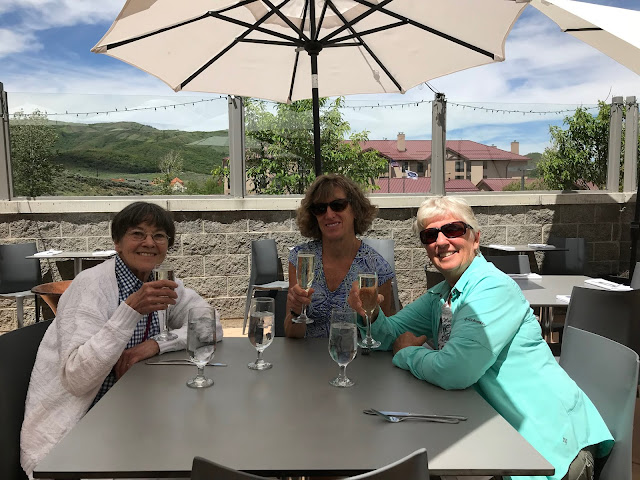 Since we don't know when we're going to be able to move (but hope soon) friends are arranging small parties, like this one on Thursday, when a trio of us went to lunch at Trio, a restaurant near us. It was warm enough and not too windy, so we sat outside.

The week was filled with work on the house, but I managed to get some knitting in. Matti's Cabbagetown Jacket is done. I just have a few more items to collect before I can hand him over to Therapy Animals of Utah for their silent auction. 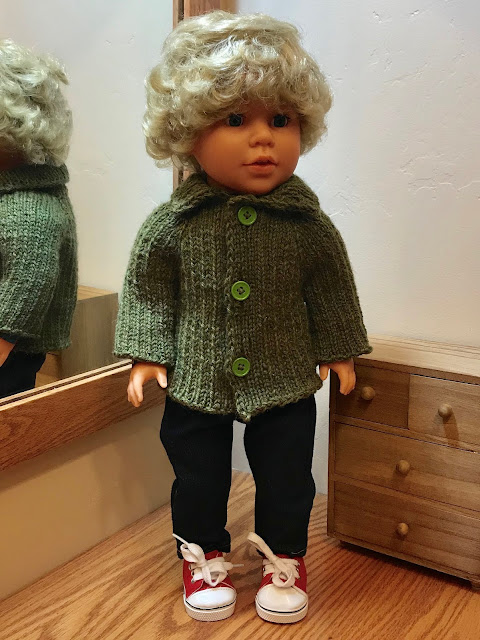 The only modifications I made for a boy were putting the buttons on the other side, not adding the flared section at the waist and doing the BO after Row 63. Matti has shorter arms, so I only worked 20 rounds on the sleeves. 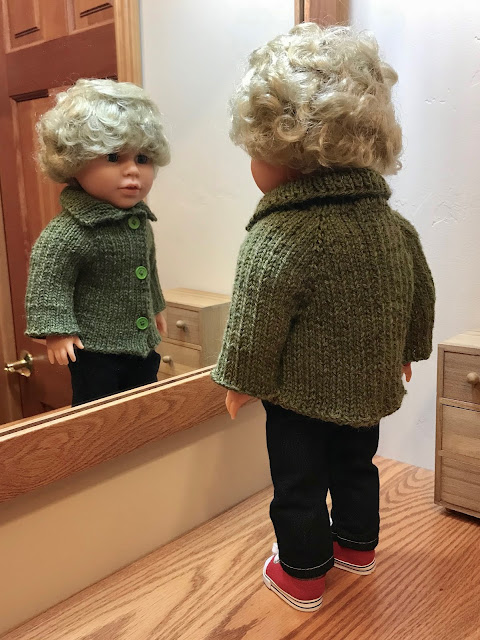 I learned two weeks ago that someone else had the rights to the Russian Dress design in English, so I've changed my pattern by using a different lace motif in the bodice. 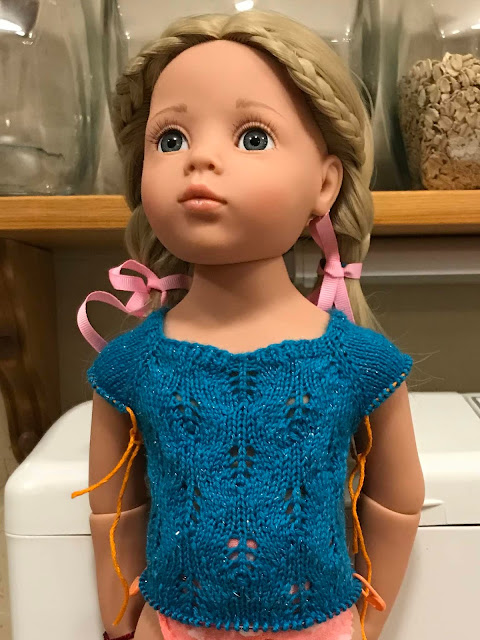 I meant a major rewrite, but that part is done now, and I'm doing the test knit. I already had a different skirt as an option, so I just eliminated the original skirt. Now I'm working on another option with a longer skirt by making the increase rounds every 6th round instead of every 4th. 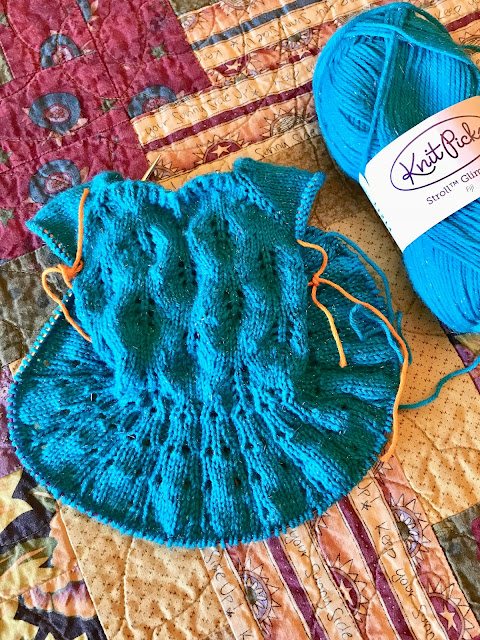 I'm using Knit Picks Glimmer (sock yarn) in "Fiji." I had a whole skein, so I think it's probably enough, even with the longer skirt.

I had called it The Russian Dress, but now it's a different dress, so I've changed the name to The Viipuri Dress. (Viipuri is the town where my Finnish MIL was born, but now it's part of Russia.)

Our daughter-in-law has asked for the sewing machine I was planning to sell, so I took it down to the city to get it repaired and serviced. When I get it back (should be soon) I can use it until after we move. I would like to make the girls each a bathing suit. I found instructions here on YouTube for making a doll bathing suit from a sock. I really need to trim the edges, though. It looks so unfinished this way. 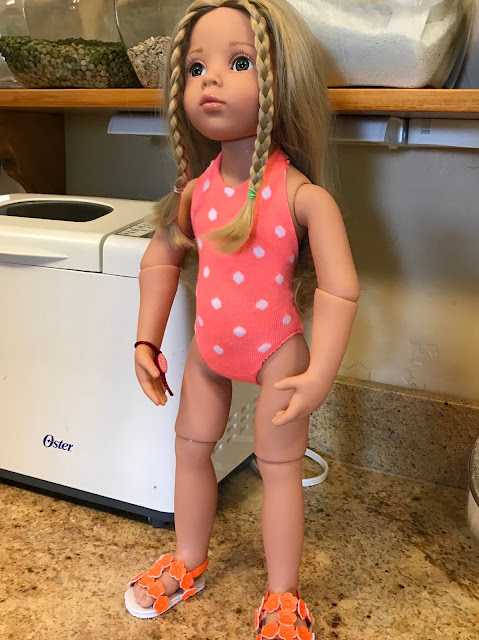 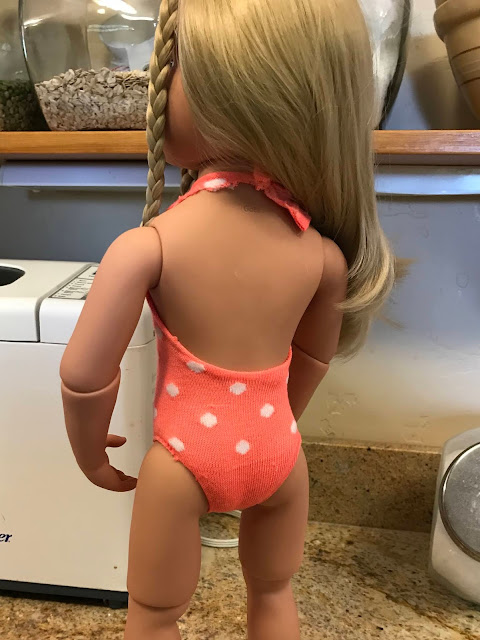 So I have some fold-over elastic coming, which I hope will be good around the cut edges. I found these girls' socks to use. (The Götz Happy Kidz are slim, so the girls' size is perfect.) 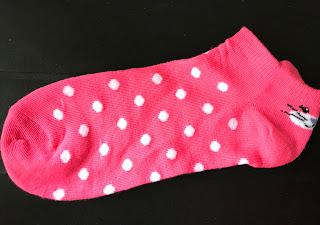 They have a cute face on the heel. I'm trying to figure out how to use that, too. Two-piece bathing suit perhaps? 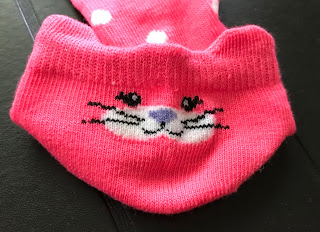 We have a dumpster out in front of our house now for construction and yard debris. Lena thought it was a doll box for a huge doll, and was worried that the poor thing needed to be let out, so Lotte dollsplained to her that there was no doll inside, just trash. 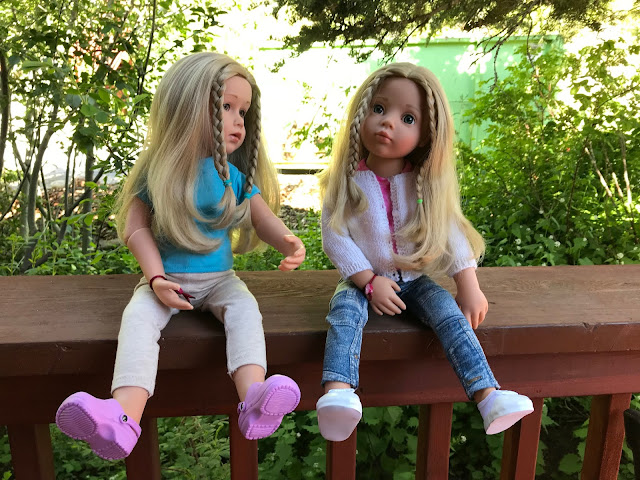 In other news, the pups went to the groomer. Here's Dusty. Summer cut. Rocky looks the same, only black. 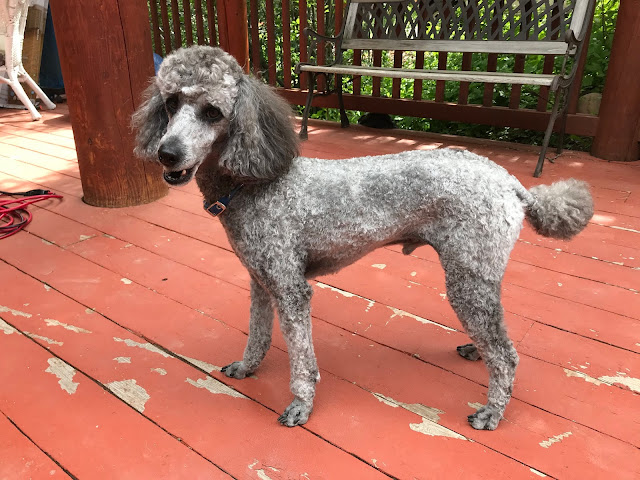 Rocky's blood pressure showed some improvement during his check on Friday. Still high, but better. Apparently it takes a while before the medication takes full effect.

What's on my needles: Still the Coastal Skies, and finishing up the Viipuri Dress for Lena.

What's on my Featherweight: Still on its way to Bend.

What's in my hoop: Still the Spring Flowers quilt, but no progress again this week.

What's on my wheel: Stanzi is still in hibernation, just waiting to be set up downstairs in the former loom area, which is still full of boxes.

What's on my iPad/iPhone: Still no time to listen to The Crooked Staircase by Dean Koontz. Maybe next week.

What's my tip of the week: Zucchini can be shredded for a great salad, if you have some and can't get to the store to pick up lettuce. Per person: 1 zucchini (not baseball-bat size), scant tablespoon each of lemon juice and olive oil, salt and pepper to taste, a little shredded basil and parsley. Dried raisins or cranberries and sliced almonds or sunflower seeds are a nice addition.

Thanks, Barbara. We do need to put it on the market still. It reminds me of the joke about the man who kept asking God to let him win the lottery, but to no avail and God finally told him, "Buy a lottery ticket!" We’re getting close, though.

You've been busy as usual. I hope your house sells quickly.

Kathleen, Lotte is proud of her "dollsplaining." She thinks it’s a compliment. LOL! If you can’t make it to my house for zucchini salad, it’s easy to make.

Irene, I don’t anticipate any changes to my virtual relationships.

It's nice your friends are treating you to say their good bye's. I'm sure they are going to miss you as well as you missing them. Moving away is bitter sweet. You hate to leave your long time friends but look forward to making new ones. But today we have the advantage of keeping in touch on the computer.

The girls are going to look sexy on the beach with their new bathing suits. Matti looks pretty sharp in his new sweater.

How neat that you can make a bathing suit with a sock for the dolls! I think that sock heel would look so cute across the butt of a two-piece bottom. 'dollsplained' made me giggle . . .

I'm coming to your house for zuke salad! Sounds delicious.