Let’s just get this out of the way first. I did get some knitting done before we had to leave to go pick up Dusty in Pahrump, Nevada. You may remember from last week that I had finished the “Everyday Play” dress for Lauren, the Habitat Girl, who will be auctioned off (she’s a doll—literally) at the silent auction to be held at Habitat for Humanity, Park City’s, annual Overall Ball on October 22nd. If you’re going to be in Utah in October, come to the ball and look for Lauren. She’ll be the one wearing overalls.

I finished the dress last week, and planned to make the jacket to go with it. I wanted to get it done before our trip, if possible. I did, and here’s Lauren modeling it. She was so thrilled with her outfit that she took a selfie with her friends, Gabi and Dolly. That was when I realized that Lauren is left-handed. All three girls are lovely, but Lauren is always smiling. She’s very happy to be off that shelf at Michael’s.

The yarn was left over from my Embossed-stitch Socks. I had dyed a hank of Knit Picks Stroll Tweed in "Bare" using Neon Green food coloring and the sun-tea method. The jacket is made from the leftovers. After finishing the jacket, I had very little left. Lauren is a Modern Girls Doll from Michael's, made by Creatology.

During the trip to Pahrump to pick up Dusty, I got some work done on my “So-not-my-palette Cardigan.” 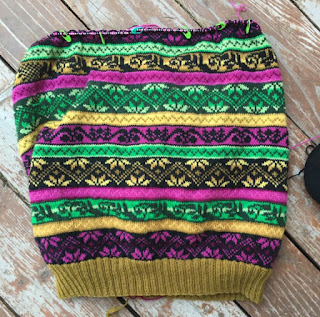 We stayed at the Best Western in Pahrump, which was only about five minutes from the home of our breeder, Marie Hedeman, of Ash’s Mystical Poodles. We had to pay extra for Rocky at the motel, so he got to share the bed with us. My guys were tired after the long trip in the car. (About seven hours, not counting the detour to Trader Joe’s in Las Vegas.) 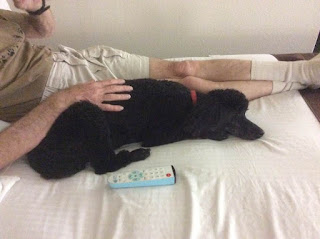 Marie’s an AKC “Breeder of Merit,” the first breeder of any breed awarded that title in Nevada. She breeds not just for conformation (how the dog conforms to the ideal of the breed), but also for health, leaning on genetics and veterinary testing of the parents, as well as the health care of the mother during pregnancy and that of the mother and puppies after they are born. She raises them in a home environment, where they are handled, groomed, played with and talked to. The puppies get used to the clippers and even their names, once the adoptive families know what they will call them. Right before they leave for their new homes, they play in and around a crate like the one they will take with them, wear a collar and leash and pick out some toys to take with them. 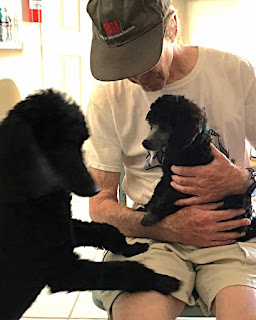 Marie and Rocky were glad to see each other again, and the two pups played a bit before we had to get into the car for the trip home. Marie gave Rocky a “cigar” to celebrate the new baby. (It’s a beef trachea, tasty chewing. Not on my diet, but Rocky enjoyed it.) 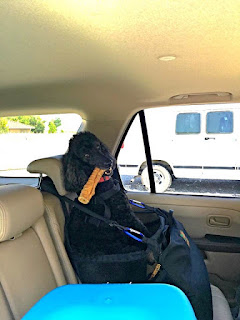 The trip home was uneventful. Dusty either slept or chewed a toy. We think he will be a good traveler. He wasn’t sick, and each time we stopped, he only fussed for a few seconds after being returned to his crate. He seems to enjoy hanging out in it.

His new “room” is our kitchen, which we blocked off with a baby gate and my fiber-sifting mesh. He had to explore his surroundings. (It’s a good thing I removed the candles from that shelf.) He even discovered another puppy in our wine fridge, but couldn’t get him to come out to play. 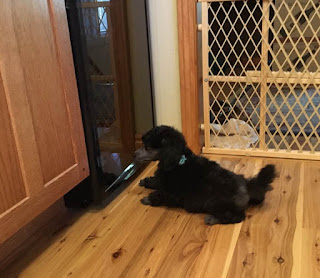 One of the main activities for the next few weeks will be housebreaking (aka “potty training”). Not much of that happened Friday night when we arrived home. Saturday went better. We had four “accidents” on the floor, but one made it onto the paper. Rocky did a demo for Dusty in the fenced wilderness we call our backyard. 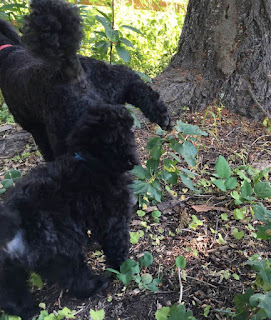 The next trip out to the backyard yielded success of each kind (#1 and then #2) after another demo from Rocky. We’ve had continued successes with the occasional accident. I think he prefers going outside, because that’s what Rocky prefers. They play in the kitchen or outside, but outside, Rocky usually wanders around with Dusty at his heels.

Sometimes Rocky has to discipline Dusty. Marie said to let him do that and not to interfere. The pet psychic who has helped us with all of this said the same thing, so I’m going with it. And that means that Dusty has three of us teaching him. Two human parents and Rocky, aka “Mr. Mom.” So…on this Independence Day 2016, I wish all of you the happiness of being not only independent but also “in dependents,” the way I am. Happiness is a warm puppy.

What's on my needles: Still hand-quilting the “Delectable Pathways” quilt. Back to working on the “So-not-my-palette Cardigan” with the car travel.

What's on my Featherweight: Awaiting the next project, although I did use it to repair a leash for Rocky and fix his car seat for the trip.

What's on my wheel: Still the Waimea Rooster Merino/Tencel from AlohaBlu, but now spinning for the Tour de Fleece. When Dusty sleeps, at least.

What's on my iPad/iPhone: Finished The Painter’s Daughter by Julie Klassen. On our trip down to Pahrump and back we listened to The Utterly Uninteresting and Unadventurous Tales of Fred, the Vampire Accountant by Drew Hayes. Humorous. Still reading Remember This by Shae Buggs on the Kindle app on my iPad.

What's in my wine glass: Cherry Blossom Pinot Noir 2014 from our stop at Trader Joe’s. Very nice, and well worth the detour, especially since that very detour allowed us to miss the hailstorm and flood, rendering this blog post less exciting than it could have been.

What's my tip of the week: Here’s very quick way to install buttons for knitted doll clothes, and if you know how to tie a square knot, it's very sturdy. Instead of a needle, I use a crochet hook with a tiny hook that will fit through the holes in the buttons. I pull a short piece of yarn (long enough to be able to tie easily) through both holes from the front to the back side. Then I pull each strand through the knitting where I want the button to be, tie a square knot and snip off the ends. Of course, if you’re using a very delicate yarn, this might not work as well. At least it’s quick. (And remember to be careful about buttons with children under three.) Rebecca, we lived on a boat for three years, so I can trust myself to tie a square knot. I make it really tight, and then clip off the ends under 1/8" without weaving them in. If Lauren could dress herself, there might be more stress on the buttons, so I wouldn't use this technique for clothes made for people.

Oh - meant to say that I really like your hint this week.  Do you weave the ends in a little way before clipping them?

I can believe you're exhausted - puppies are real going concerns.  I'm glad the mushroom incident was resolved without a problem (well, except for the rushing to the emergency vet) - I've heard some really sad episodes with mushrooms and puppies.  And Peggy - he is just so cute!  Oh my.

Thanks! I'm exhausted, but he's sleeping well at night, and the vet is pleased with him.

Ah, everyone is happy now. Congratulations.

That works well, I think.

Glad Dusty and Rocky are getting along.  We always let our older cats teach the new kittens the house rules.  They often did a better job than we could.

Comment by Peggy Stuart on July 4, 2016 at 2:47pm
It seems like a nice little town. They also don't have fleas, ticks or mosquitos. They may have scorpions and spiders, though. I don't know.

He is really cute and I'm sure Rocky loves being "Mr. Mom" to him.  My husband & I have talked about moving to Pahrump if we ever move back close to Las Vegas.  That way we would be kind of close to our sons & grandkids without the hassle of Vegas.

Comment by Peggy Stuart on July 4, 2016 at 10:02am
We had an emergency already. Dusty is ok, but we had to rush him to SLC to the 24-hr. vet clinic. He found a mushroom in the backyard. They induced vomiting and found a small piece of mushroom. Bland diet for a couple of days.