Janet brought her completed block to Common Threads this week. 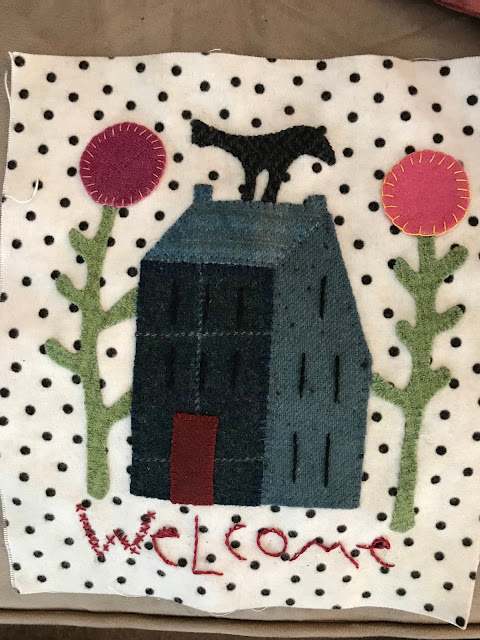 You may remember from last week, the blocks are from a free BOM from Buttermilk Basin. She was trying to use tissue paper as a guide for the embroidery, but she switched to Press 'n Seal on the advice of other people who are making this block, which has background fabric too thick to see through with the light box.

Karan has been learning how to do machine embroidery with cutwork. 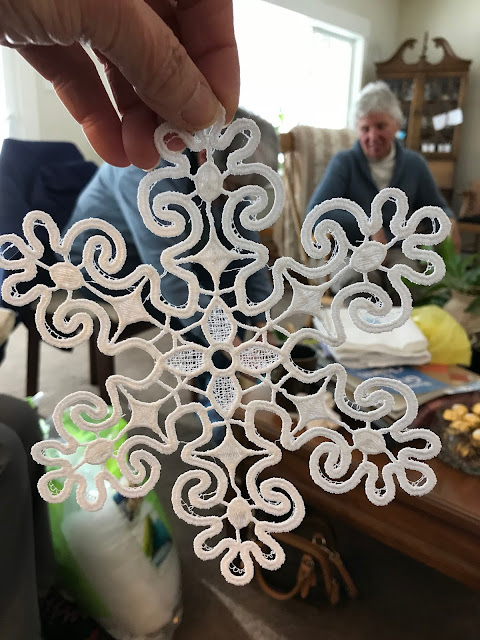 The piece above was done using a wash-away product. The butterfly below is also cut away, but using a technique that leaves most of the fabric intact. 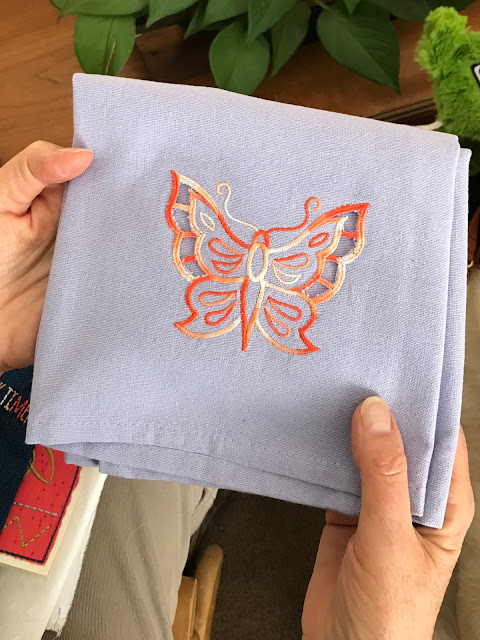 Here are some more of her projects using these techniques. 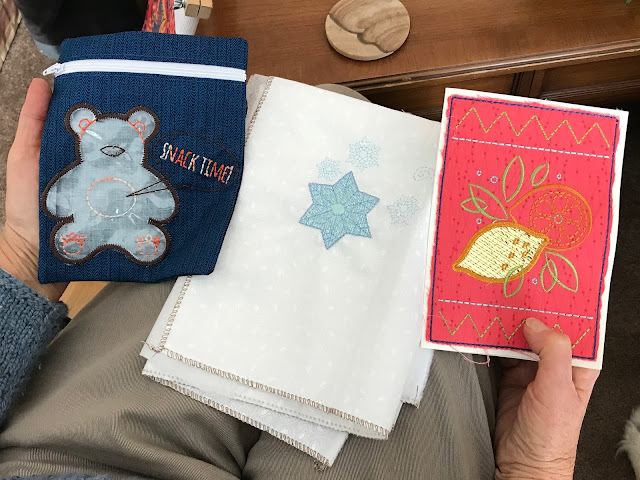 This tree is fun, and the ovals are cut to create little areas of pile. She said she actually liked it better before it was cut. 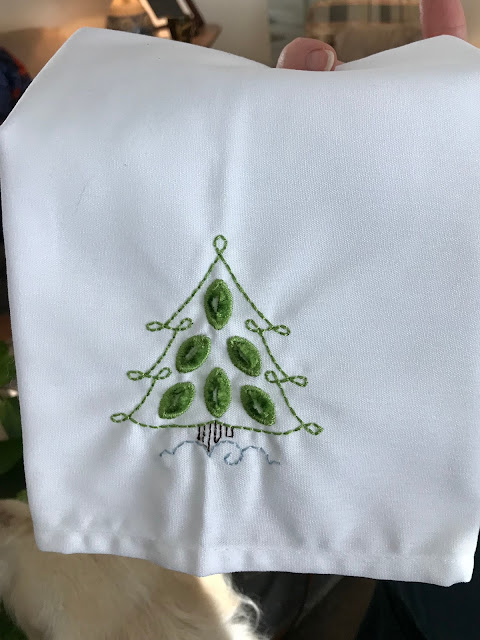 Janet is knitting the Mountain Cozy Cowl by Cathy Miller for a relative. The yarn is Juniper Moon Farm "Moonshine" worsted. She's getting close to finishing. 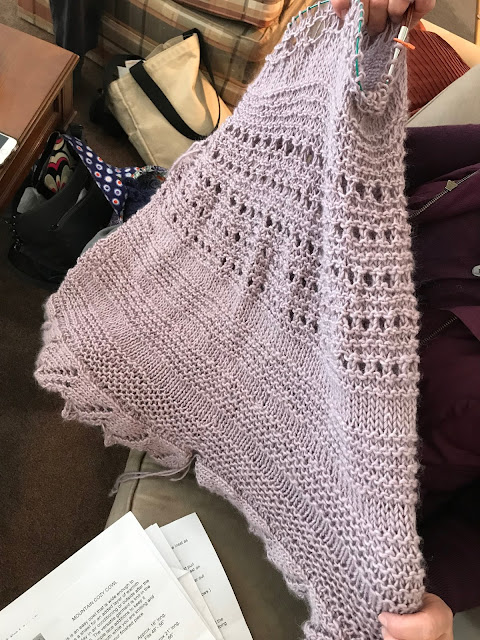 Ginny had finished her needlepoint picture of the three dogs. She plans to make a pillow. The ribbon she's holding up next to her project will outline the picture. 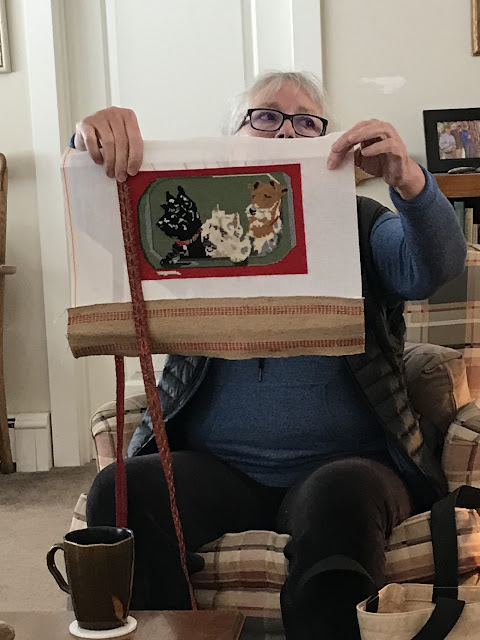 Now she's working on this interesting design. I think it looks like a doll's rug. Hmmmm.... 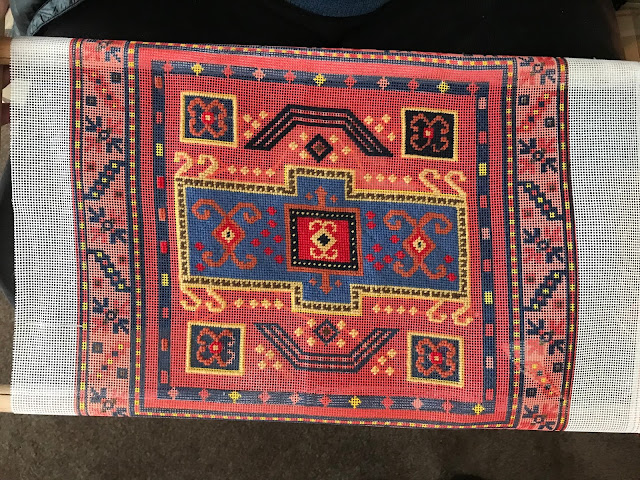 Speaking of dolls, You may remember the shipment of goodies the Götz girls received not too long ago...the one with all the rain boots? There was also a package of Götz panties/knickers labeled with the days of the week. Mandy picked "Monday" because at first she thought it said "Mandy," but she loves them anyway. (The sulky face is because I told her to go put on some warmer clothes.) We received another shipment, this time from Götz USA. Three pairs of shoes. This website doesn't have a huge selection, but they do have a few dolls, and the shoes are much more reasonable than the same ones on Amazon, the only other source in the USA that I know about. Mandy had been wanting the white Mary Janes with the flowers across the strap, and they were almost $45 with the shipping on Amazon, as opposed to $13 plus shipping at Götz USA. Because I was getting two more pairs of shoes, the shipping worked out to about $2/pair. If you order $40, the shipping is free. 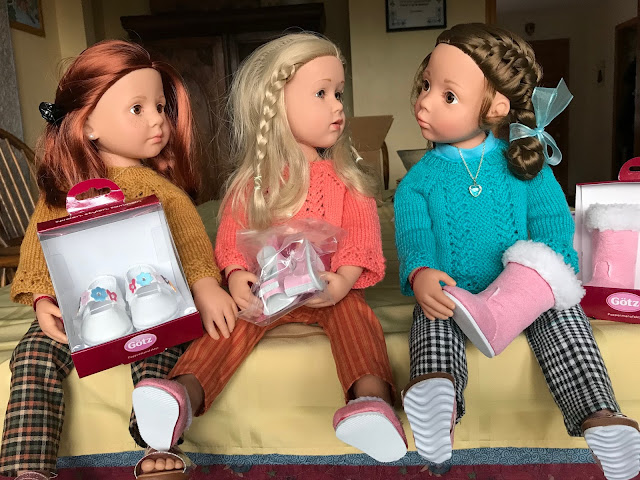 I'm working on the front bands of my Norwegian cardigan pattern for Mandy. The body and sleeves are done. Here's the back. 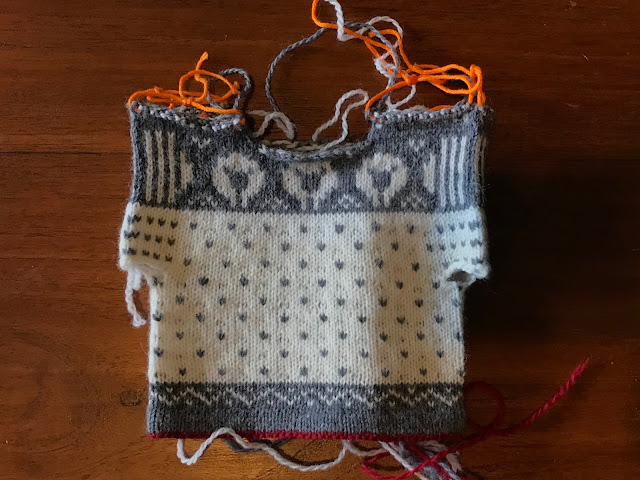 The front is hard to photograph, because of the center front steek, which sticks up, making shadows. I'm putting the body aside for now, because I'm knitting the sleeves together in one piece with steeks between them, from the bottom up, rather than picking up the stitches around the armhole. The sheep motif is being used with permission from the designer, Elizabeth Lovick from Northern Lace. She had used it in her pattern March of the Fibres Sweater, which I also plan to knit.

We were expecting a major snowstorm over the weekend, so on Friday, while it was...well, not exactly nice, but not especially cold and windy, we took the pups to Run-A-Muk Dog Park. Rocky had a good run. Dusty ran and ran and ran, especially when he met up with other dogs that liked to run and play. DH and I had a nice hike. 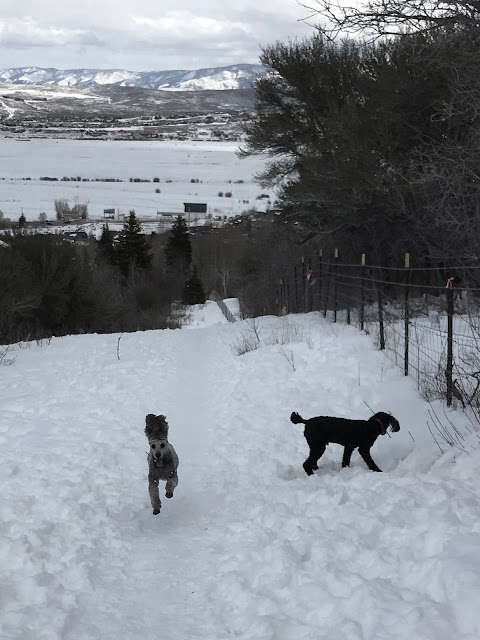 What's on my Featherweight: Pants and skirts.

What's in my hoop: The Spring Flowers Quilt.

What's on my iPad/iPhone: Finished Listening to The Scandalous Sisterhood of Prickwillow Place by Julie Berry. This was a good read, with a lot of dark humor, so added more titles by this author to my wish list at Audible. Then listened to La Danse de la Folie by Sherwood Smith. Now listening to The Weight of Silence by Heather Gudenkauf. On my Kindle app I'm still reading Miss Braithwait’s Secret by G. G. Vandagriff.

What's my tip of the week: If you’re knitting a sweater, cowl or other garment in the round and want to try it on to see if it’s long enough (or wide enough), if you put half of the sts on another circular needle, it will be easier to try on.

Lots of fun and interesting things to read about. Thanks for the fun show and tell. Love the girls and their new shoes.

Thanks, everyone! I've been busy finishing the cardigan and getting it published on Ravelry.

I enjoy your show and tell. Love looking at all the beautiful work you ladies do. Spring must be around the corner. The girls are showing us their new shoes.

Love all he different projects! Always interesting to see what the gals are working on.

You and your group are busy, busy as usual. Isn't it amazing how many kitchen items show up in our sewing quilting areas? I have freezer paper in my sewing area. Not in my kitchen.

Our weather here is very changeable. Yesterday the dogs took me to the lakes and it was miserable--snowing, blowing, nasty. Today it was sunny, and still breezy but the warmer air made it doable. The melt is on.

Enjoyable read as always.  You and your friends get so many good projects done.  Always fun to read about what the girls are up to also. Weather in Minnesota is interesting today with rain, sleet, thunder, and light snow with more forecast.  Good day to stay inside and quilt.