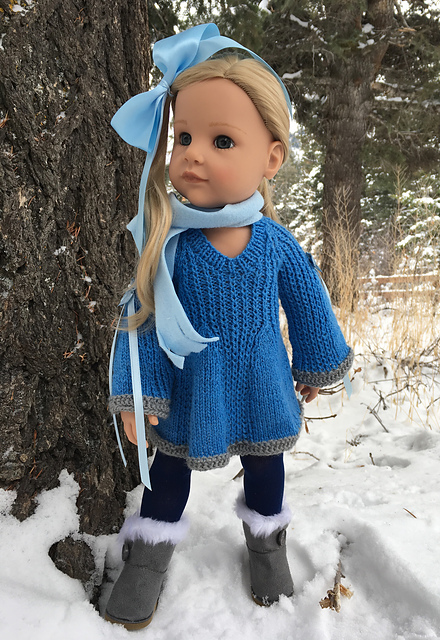 We have lots of snow, so it was easy to do a photo shoot with her in realistic surroundings. The hardest part was finding a place where the snow wasn't up to her waist. She liked this place under a fir tree. Hannah is very photogenic, and her older-girl shape compliments the design...or the design compliments her figure. 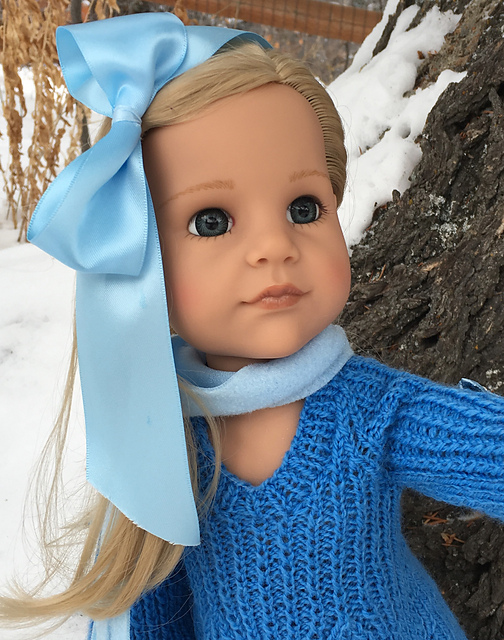 The pattern is Camelot by Deb Denair. It buttons down the back and is knit flat. The only seams are on the sleeves. I used Palette in Pool and Fog.

Hannah is a Götz doll. Dolly is a Madame Alexander, with a cloth body and a little plumper. I tried the dress on her to see if alterations might be needed if someone wanted to make it for a different doll. Here's how it looks on her: 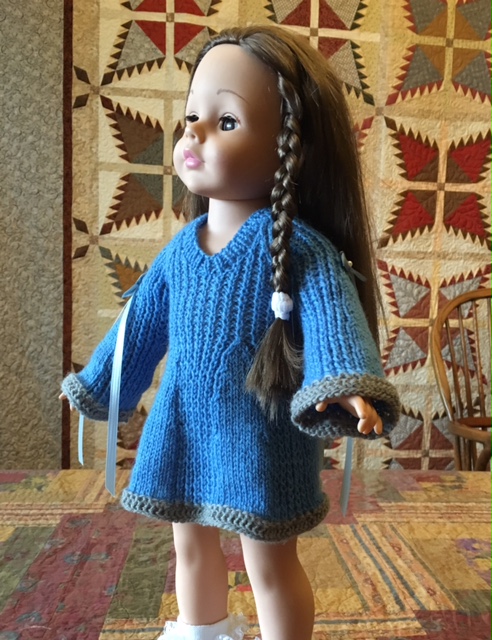 The sleeves are a little long for her, but otherwise it fits, although her figure doesn't show off the lines of the design quite as well. Dolly is a bit slimmer than American Girl dolls, I think, so I suggest going up a needle size if making the dress for an AG doll.

The dolls who live with me will be losing their clothes at Christmas, so I ordered some "Jeggings," leggings that look like very stylish jeans. The company, that makes and sells the the Jeggings on eBay, Pixies1952, makes them in AG size and Götz, as well as to fit a few other popular dolls. Dolly and Gabi are modeling the AG size. 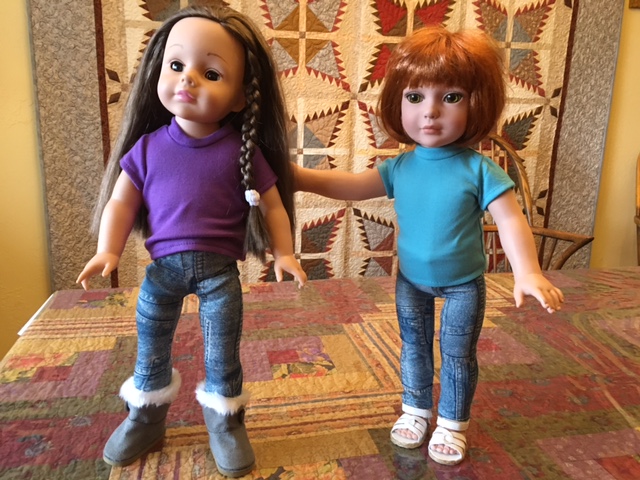 I really, really don't like having naked dolls standing around in my house. It makes me want to knit or sew them something right away, and then I end up giving the clothes away. I ordered four pairs, so I can send some home with Hannah, too.

I'm ready to pack the dolls away in their boxes so I can wrap them for Christmas. I can't bear thinking of Hannah staring at the inside of her box until December 25th (her eyes don't close), so I'm going to pack her wearing a sleep mask.

Buddy and Dude are almost ready to wrap as well. I just need to tattoo the children's names on their bums, so they don't get mixed up. All four kids are getting dolls this year. Johan is getting this Raggedy Andy, who is on his way to me now. 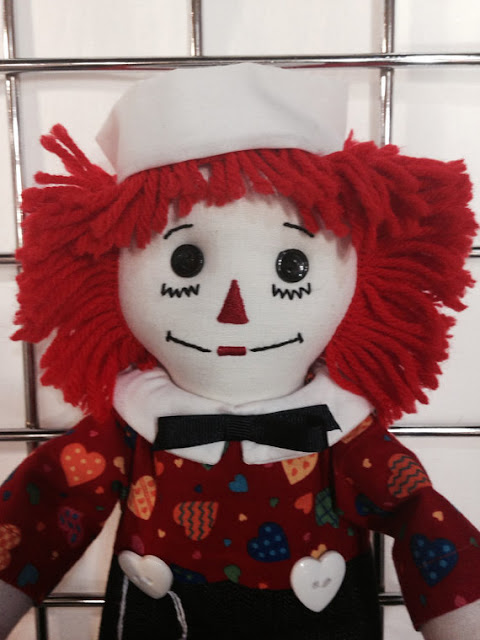 He's handmade in the US. I found him on Etsy at Roszanna's Dolls. I plan to make him something, maybe a jacket and a scarf. Johan is a little young to dress and undress a doll by himself.

I was reminded recently of the iBand concert I found back in 2010 put on by North Point Community Church. I thought it might be fun to share again.

Here are the apps used (and the names of the performers).

Not much quilting going on right now, but I'm back to pressing and folding my fabrics, in between cleaning house and cooking. I'll try to get a photo of the reorganization effort when there is more to show.

DD's family of four will arrive about December 23rd, assuming the weather holds (they're driving) and DS2's family of four will fly in Christmas Eve. DGD1 is driving from her new home in California on December 26th. The families with little kids will leave New Year's Eve and January 3rd, and later that week we expect DS1, although his plans aren't set yet.

What's on my needles: Back to the “So-not-my-palette Cardigan” second sleeve is coming along.

What's on my Featherweight: Waiting for the next project

What's on my iPad/iPhone: Listening to An Irish Country Christmas by Patrick Taylor. Still reading A Rose Before Dying by Amy Corwin on the Kendall app.

What's my tip of the week: Liquid hand soap often is so thick it clogs the pump. You can avoid this by diluting the soap. I like to fill another bottle about halfway with warm weather. Then I empty about half of the bottle of soap into the bottle with the water. You can just add warm water to the original bottle, but it mixes better if you use a third bottle. If you aren't using it right away, it will mix on its own. I think this wastes less soap, too.

I think I still "played" with dolls at about 13 or 14.  I had moved from the farm country in Oklahoma to the big city of Houston, Texas, and we lived with my aunt and three girl cousins for several months.  My eldest cousin and I made clothes for her fashionable doll, kinda like the AG dolls of today.  You should have seen our so-called designs -- they were hilarious!  We had no idea how to sew or cut -- skirts were a circle with a hole cut in the middle.  This was in the very early 50's and we were digging around in my aunt's scrap bag!  I was fascinated by her long-haired, grown up looking doll; I had no such thing myself!  I think I'm still jealous of your Daphne!

Gorgeous, gorgeous! I didn't play much with dolls. I had a collection of horse figurines that entertained me.

Comment by Peggy Stuart on December 6, 2016 at 4:26pm
People have strange ideas about dolls. I remember when moved to another town when I was eight. I was very into dolls and got the other little girls my age to playing with them. The mothers complained to my mother that they thought we wer too old to play with dolls. I started feeling embarrassed about it, but I didn't stop playing with my dolls until I was in high school. I know now it was therapeutic for me to play with dolls. It gave me a safe place to go where I could work out issues with friends and family members or have adventures to ease the boredom. I also learned to sew, knit and make books, pencils, pots and pans and other things for my dolls. I hate to think what my life today would be like if I hadn't had that outlet. There are several doll groups on Ravelry, one devoted entirely to AG dolls. You might like to have a look: http://www.ravelry.com/groups/american-girl-knitters

It's so nice to see all the clothes you have made for your dolls. I have an AG doll whom I love but DH is convinced grownups don't play with dolls so she doesn't get much attention. I played with her a lot when my DGD played with her AG dolls (we played together) but she has outgrown them for a few years now. I'm hoping she will return in the future. Meanwhile I'm making clothes v.e.r.y slowly. By hand because that's how my doll's mom would have done it. Funny, but DH doesn't mind my attachment to stuffed animals. He has given me several. Go figure.

I don't think I would want to be put in a box or a suitcase while conscious.

I've said it before - the clothes you make for the dolls are absolutely lovely, but what I've failed to say is that I think Hannah is just about the most beautiful doll I've seen in years.  What an absolute treasure you are creating for your granddaughter. Love the 'jeggings' - thigh gap!  LOL!  And yes, Hannah needs a sleep mask - it reminds me of something I read years ago about how the puppeteers on the Muppet Show had so much difficulty packing Miss Piggy into a suitcase for travelling.

Comment by Peggy Stuart on December 5, 2016 at 8:50am
Great idea! My SIL (passed away a couple of years ago) made a Raggedy Ann for our daughter when she was one year old. She still has it, and Daphne plays with her. She sat on top of the cabinet in my dining room for years, sitting on the little red chair I have.

Your dollies are the best dressed...I had a friend that made gorgeous Raggedy Ann and Andrew dolls along with different outfits. She since has passed, but her dolls are great keepsakes. I would give them as baby gifts along with a Raggedy Ann book.