Vintage Stitchers had a party to say goodbye to me. 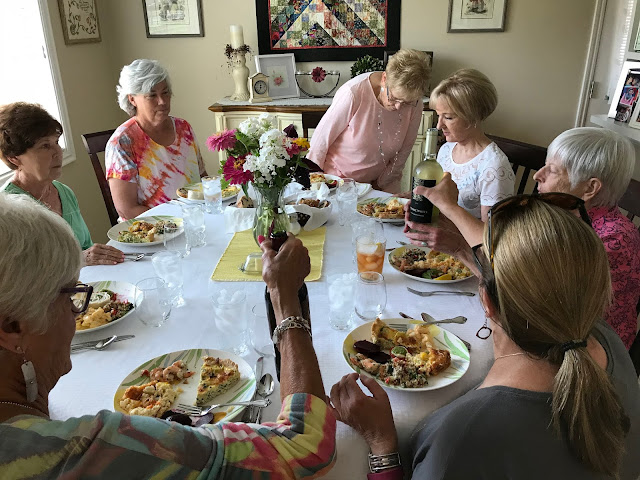 It was an exciting day, because my rear-view mirror fell off. That would have made it dangerous to drive, so I called my local Vintage Stitchers friends to see if one of them could pick me up. Julie was available, and it was nice to have a chat in the car on the way to Barbara's and back.

We started our meeting a little later than usual, so we could have lunch. Everyone brought quilting projects to work on. Barbara had some blocks I believe were part of a BOM from Kim McLean. Here's a sampling: 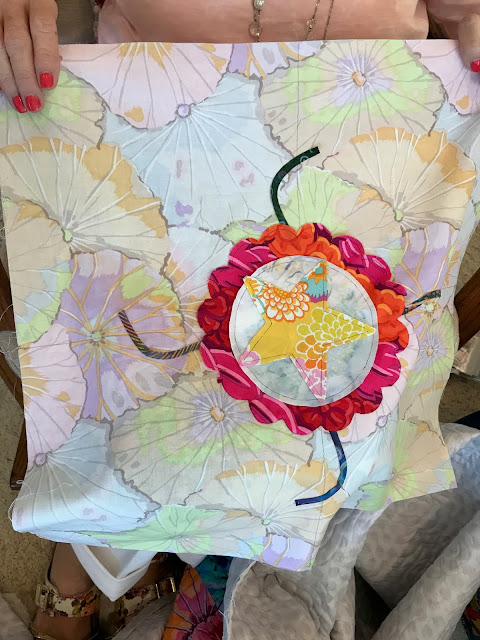 That one included some Kaffe Fassett fabrics. Then there was this one: 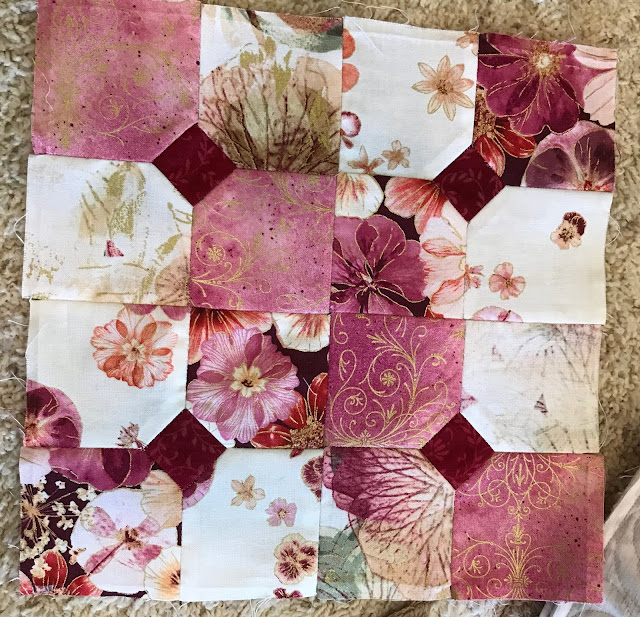 I think I've shown this one before. Then there was this one. 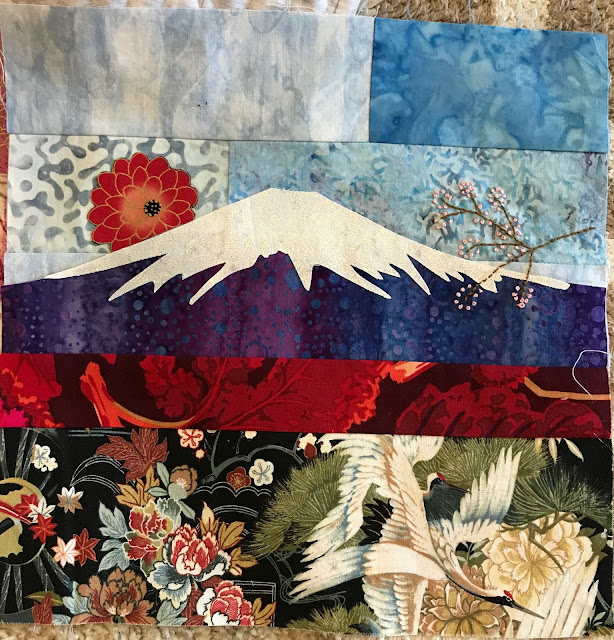 It's clever using a flower (chrysanthemum?) for the sun. Then there's the moon. 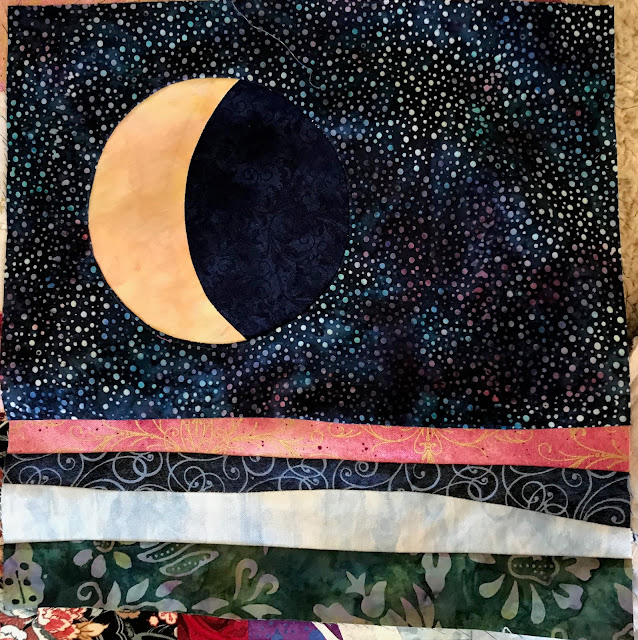 This was a crazy quilt block. 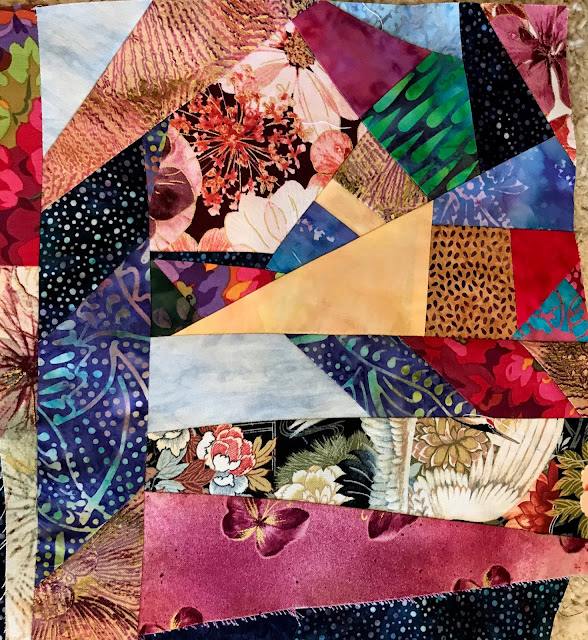 Barbara also used some of the flowers in her garden to make her own fabric design. She pounded the fabrics into the fabric. 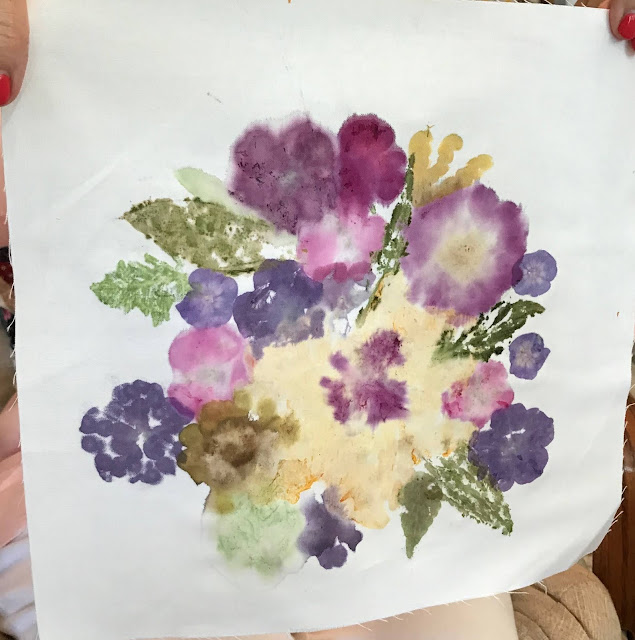 I believe it's this technique. Janet and Rebecca were working on projects from Sue Spargo's Fresh Cut Quilt. Everyone had a look at Rebecca's copy of the book. 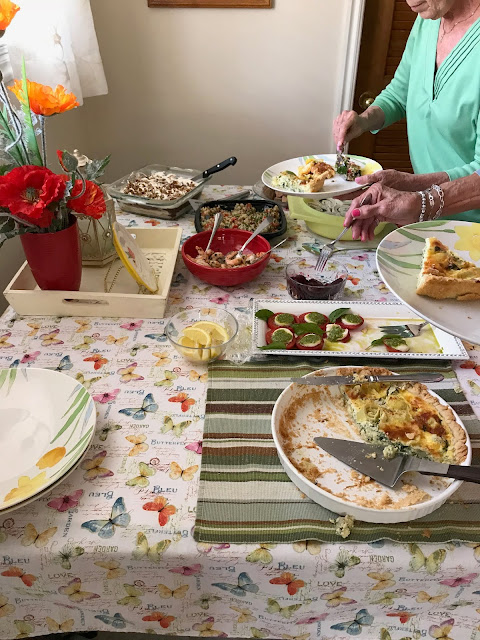 Lunch was potluck. I was touched that my friends in Vintage Stitchers said that they would not be friends with all these others if it were not for me. I've been lucky to have such great friends. I hope they will come to visit me and go to the Sisters Quilt Show, perhaps next year. I'll miss Barbara's fantastic back yard. 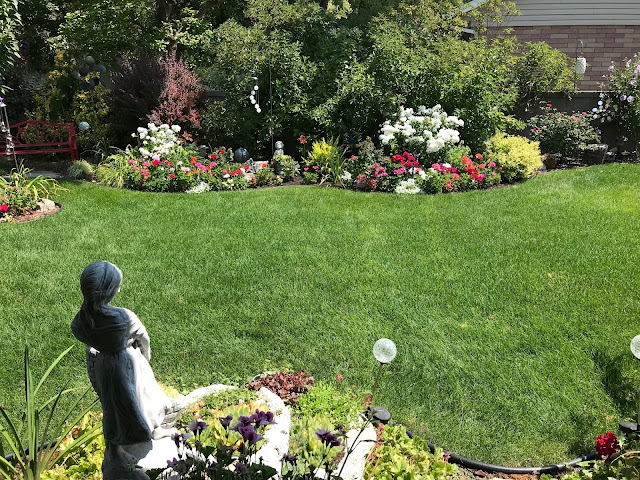 That afternoon I took my car to the place that replaced our windshield. They stuck my rear-view mirror back on at no charge.

I had some business cards made up for the blog "The Doll's Storybook." I take a few with me when I go places. When I see someone with children or who might have children, I offer the card, so people can check out the blog if they like. I didn't put my name on them, because people can get that from the blog. Here's a photo that shows both sides. 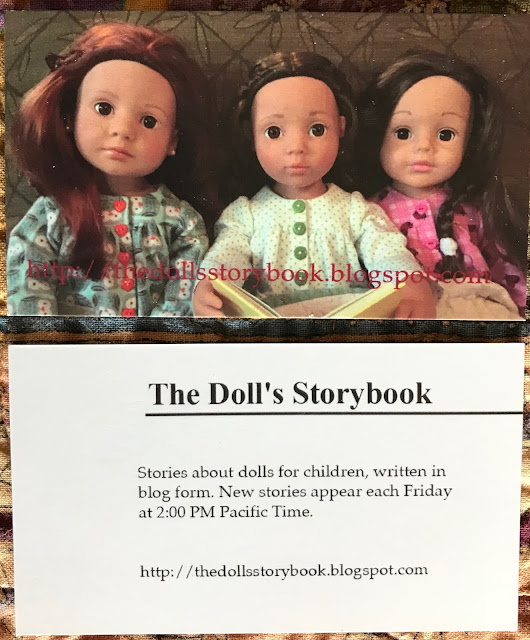 The latest story is about the struggles of learning to be good at music and dance.

I didn't get a chance to try out my attachments for the Eversewn Sparrow 15, but I'm still enjoying it. I keep learning new things with the machine. I made another peasant blouse for Vroni, and some leggings. I didn't have any purple thread, so I had to use white. I decided to use zigzag to make the casing for the elastic (shirring elastic, threaded through with a yarn needle) so it would look like a design feature. I covered the hem thread with a decorative design. 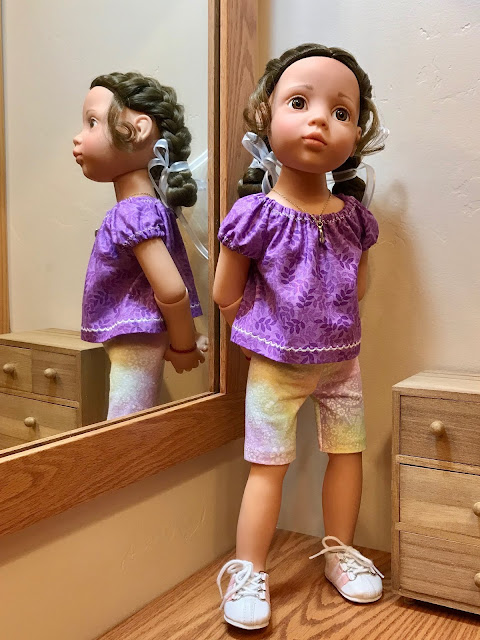 I think Vroni was appreciative.

The pups and I went to Run-A-Muk Dog Park a couple of times during the week. It had rained, so the stream had doggie Koolaid again. For some reason, the water that has some color to it tastes better than the Reverse Osmosis water I carry with me. 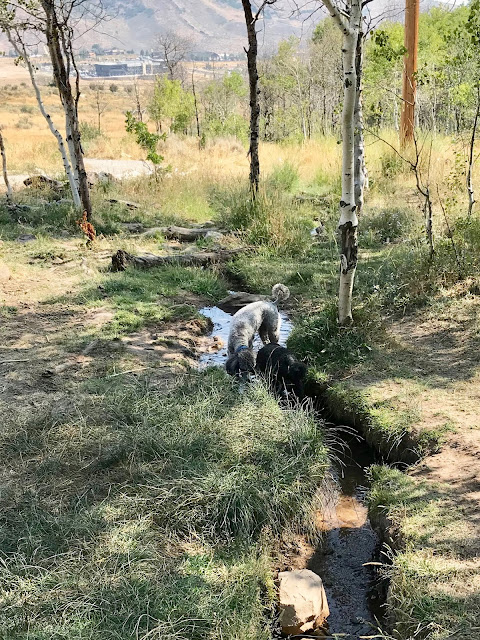 Our deadline for "due diligence" on the sale of our home has passed. They asked for another $10,000 to pay for improvements they would like to do. We stuck with paying for the radon abatement, as we had planned, and a couple of necessary plumbing fixes that showed up in the inspection. We had planned on doing some other things voluntarily, but we scrapped those items, because we're already way under market for the amenities we have. So our house is sold. We expect to be moving out toward the end of the month, as planned.

What's on my needles: Still the Kisu Cardigan for Jolena, and still att the BO for the neck. Also the Coastal Skies shawl for me, which I worked on a bit this week.

What's on my Sparrow 15: On to using the overcast foot.

What's in my hoop: Still the Spring Flowers quilt, a little more done during Vintage Stitchers.

What's on my wheel: Stanzi is still waiting patiently. I may have to pack her up before I get back to spinning.

What's on my iPad/iPhone: The Innkeeper of Ivy Hill by Julie Klassen. Just started to listen for a bit this week, as things have been busy.

What's in my wine glass: Bonair Late Harvest Riesling, 1999, found at the back of one of our Wine Cellars, but still good.

What's my tip of the week: Speed up defrosting a freezer by parking a fan in front of the open door. (You do have to turn the fan on, of course.)

Barbara has a fantastic back yard. It's the product of years of hard work and careful tending.

We will be officially homeless on August 28th. We have a home on wheels, and my DBIL has a home big enough for us to stay with him. I just don't want to impose, so if it's a long time, maybe we will keep the trailer in one of the RV campgrounds. Some offer monthly rates that are fairly reasonable. That would be on top of our storage fees, so I hope we find something quickly.

I'm happy for you that the sale is going forward.  I agree that people have a lot of nerve with re: top asking sellers for some things that they need to be prepared to pay for themselves.  Have you purchased a home in OR yet?  Your friend's backyard is gorgeous!  I always envy people who have  yards like that.  My mom had a green thumb, but sadly that gene skipped me!

I always learn things from these ladies.

These girls now watch HGTV and expect a $400,000 house for $200,000! Good for you to stick to your price. Hope the move goes easily. Saying goodbye is so hard but know these gals will visit often. Beautiful blocks and I'm going to look into the the flower technique!

Forgot to answer your question about the photo with the dogs. Rocky is so dark, I lightened it up a bit. Otherwise, it’s just as it was. It’s a lovely setting. Part of the park is open fields, but the woods are lovely.

Thanks, Rebecca. You think the way we do. It was pretty nervy, imho. They really liked the kitchen, though, and he does kitchens.

Great blog post Peggy.  I have to ask - why would the purchasers of your house expect you to pay for the improvements or changes they want to make?  Somehow, I think that when people buy a house they buy the house that is being sold - not the house with changes they want.  Yes, Radon abatement or things that show up in the inspection - but improvements?  What - they want you to pay for a new kitchen? I'm shaking my head.

Now - let me say that the photo of your dogs in the dog park - the background of the photograph is absolutely stunning!  How did you manage to capture it so that it looks like a painting?

You're going to miss your friends, but you'll make new ones and they will become just as special to you.  I wish you a most successful move!

I’m hoping some of them come for the Sisters Quilt show. That will be very close to us.

Those quilt blocks are beautiful!! I need to look up that pounded flower technique. And what a nice party your friends gave you. Will you be so far away from them with your move that you won't be getting together anymore?